What is the KitchenAid Mini?

After years of creating bigger and better stand mixers, KitchenAid has addressed the needs of a growing number of keen bakers who have limited space and smaller batch lifestyles. The KitchenAid Mini might have the irresistible good looks of the iconic Artisan stand mixer, but it’s 20% smaller and 25% lighter, with a downsized bowl to match.

For all its compactness, it packs no less power than its bigger counterpart, can use the same optional hub attachments and is still available in four covetable colours – Honeydew (exclusive to John Lewis), Matte Black, Matte Grey and Hot Sauce. 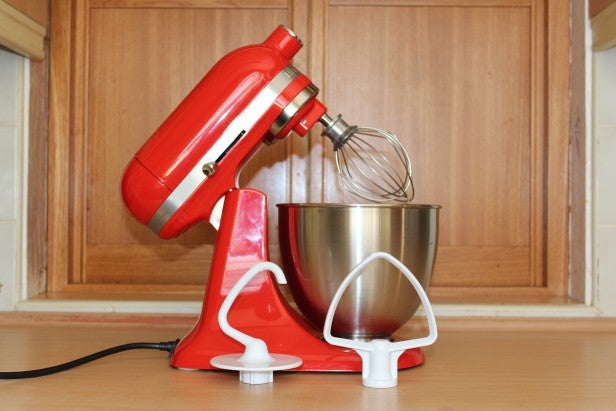 Those iconic curves remain unchanged, so there’s no risk of design fans feeling like they’ve made a compromise. The more noticeable differences are its size, which means it has more chance of fitting into a cupboard or at the back of a worktop in space-challenged kitchens, and its weight.

At 6.5kg, it feels no less sturdy when in use, but it’s easier to move around when required. The weight distribution is a little different, as there’s a similar-sized motor in the mixer’s head. When tipped up, it has a tendency to slightly lift the base and bowl if it’s empty.

The body is made from the same enamelled die-cast zinc for easy cleaning and a feeling of solidity. It’s fitted with metal knobs and comes with a stainless-steel bowl.

The controls are simple – there’s a switch at the back to release the mixer head so it can be tipped up, and a slider control at the front that offers speeds from ½ to 10. All of the speeds come with a soft start to prevent splashes and flour puff.

The Mini’s supplied with three attachments as standard – a flat beater for mixing and creaming, a dough hook for slow mixing and kneading, and a wire whip for whisking. This last tool is the only part that needs to be cleaned by hand. 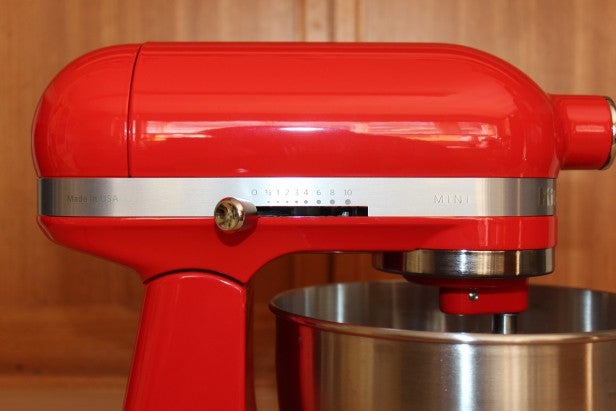 Putting the Mini together was simple – the bowl twists into place on the base, while the tools are attached and removed with a push-and-turn motion. It was awkward reaching around the back to find the switch to lift the mixer head, so this required a bit of practice.

The number slider controls on the front are easy to use and move smoothly through the speeds with a gentle lift, although it’s possible to alter the speed in intervals by moving straight from left to right. There’s a guide to which speed to use with which tool and task, but there are no basic recipes to get you started.

I started by fitting the hook attachment to make pizza dough, adding all the ingredients at once. Even with the soft start, it was handy to have a ½ speed to help the flour and liquid to combine. While at first it looked as if there would be ingredients left on the sides of the bowl, the efficient planetary motion slowly managed to bring them all together without me scraping them down. I then turned it up to speed 1 for a faster mix before switching to speed 2 for a thorough knead. I was left with a neat ball of dough that proved well and was elastic enough to stretch flat into pizza bases. 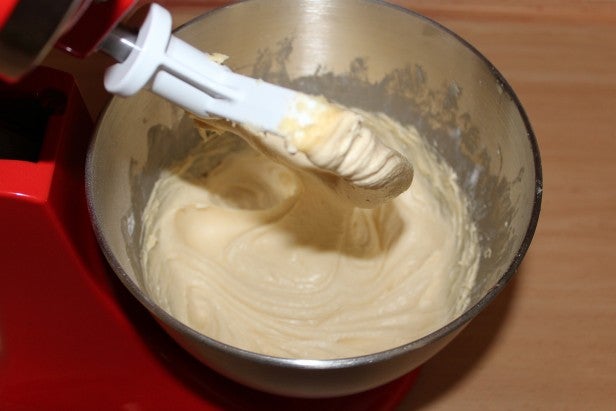 Next, I made sponge cake batter with the flat beater. Placing sugar and softened butter in the bowl, I set the mixer on a low speed to initially combine, then turned it up to speed 6 to cream the ingredients together. Before long, the sugar and butter had been transformed into a smooth, light paste, which only needed a couple of scrapes down to return rogue ingredients to the centre of the bowl.

Adding self-raising flour and eggs to the bowl proved too tricky in situ, so I had to remove the bowl to introduce them – the beater gets in the way. However, the Mini did a great job of mixing the cake batter so that the mixture was smooth, consistent and visibly well aerated. The sponge rose well in the oven and was noticeably light and fluffy.

I finished by whipping two egg whites until they were stiff with the wire whip on speed 8. It took about five minutes for the egg whites to form peaks, and throughout the mixer made very little noise even on a high speed. Clean up was straightforward – everything can be cleaned in a dishwasher, apart from the wire whip, which is easy to clean by hand. 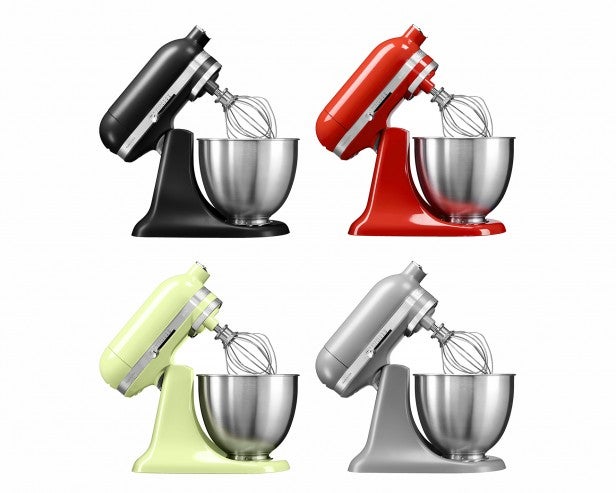 Should I buy the KitchenAid Mini?

The best thing about the Mini is that its only compromise is its smaller size. Everything you’d need is here but downsized, with the bonus that you can use hub attachments from the bigger machines. It’s a little awkward to add ingredients to a smaller bowl, which keen bakers may find frustrating, and a splashguard would’ve been a useful addition. Niggles aside, this is a solid, hard-working mixer and a real no-brainer for small kitchens or those short on workspace.

The Mini does what it does well, but it still comes with a blow-the-budget price tag.