What is the KitchenAid Artisan Magnetic Drive Blender?

It’s safe to say that when KitchenAid says it’s reinvented the blender, it’s not kidding. The Artisan Magnetic Drive is barely recognisable from earlier models, its diamond-shaped jug being the only clue. But one thing is certain – it isn’t any less powerful.

Its stainless-steel blades are driven by magnets hidden within the base, ensuring that while the jug-base unit connection on other blenders may wear out and fail, the Artisan Magnetic Drive Blender will continue to perform at its best.

Since the design places the blades lower to the worktop, and its die-cast metal body is well balanced and weighty, this blender is also more stable – it can blitz through practically anything at speeds of up to 16,500rpm. 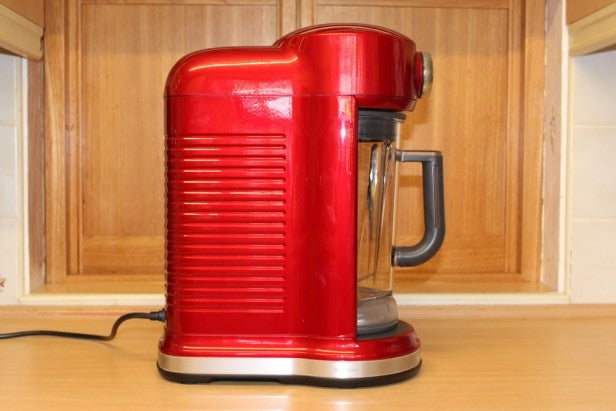 With a jug similar in shape to the brand’s Diamond blender – both for easy scraping out and to assist with the blending vortex – the Magnetic Drive Blender is every inch a KitchenAid, uniting established product design with new technology. 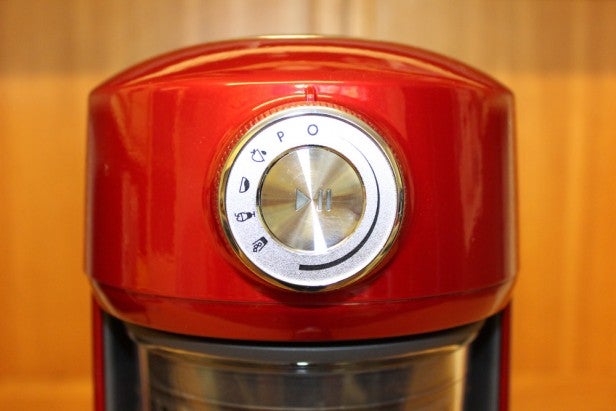 The bottom of the BPA-free pitcher is sealed and flat, sliding onto the base in one smooth motion. A lock-in handle holds it securely in place. Inside, differently angled blades ensure that no food escapes them, and the jug is topped with a push-on sealed lid.

Above, a chute with removable funnel allows you to add ingredients whilst the blender is in operation, and a measuring cup fits into it as an extra lid. At the front, there’s a control wheel for preset programmes – Icy Drinks/Smoothies, Milkshakes, Soups/Sauces and Juice – as well as an option for pulse and constant variable speed.

In the centre, a Start/Pause button controls the programmes, so there’s no need to worry about accidentally turning the wheel and it starting by itself. There’s no recipe book in the box, but there’s the option for owners to send off for one. 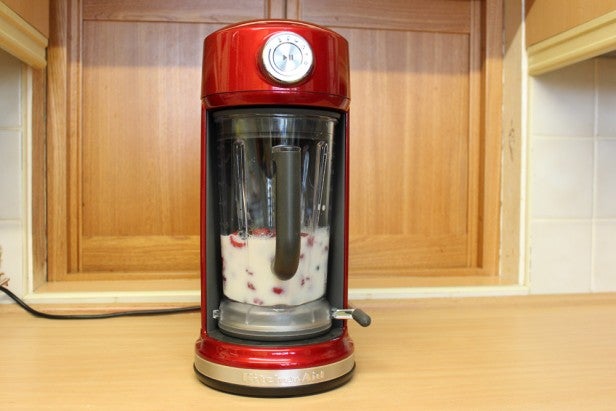 KitchenAid Artisan Magnetic Drive Blender – What’s it like to use?

For those familiar with how a blender functions, be aware that the Artisan Magnetic Drive Blender works a little differently. As a result, it’s best to practice the action of sliding the pitcher onto the base a few times to make sure it locks in properly before you add any food. The control wheel’s central button will flash to indicate when it’s in place correctly and the blender is ready for use.

I started by using the Icy Drinks/Smoothies programme to crush ice. Within seconds of adding a handful of ice cubes to the jug, it had been blitzed to small pieces with only slightly more time required for it to be reduced to fine, fluffy snow. While the programme usually runs for just over a minute, it was clear that this extra time wasn’t required, so I stopped it early.

Next, I added milk, raspberries and blueberries to the pitcher before setting it on the Milkshake programme. This began slowly to blend the fruit, before speeding up to incorporate it. Not only was the resulting milkshake evenly blended, it was also incredibly thick, with the consistency of a drink that included a banana. While there were traces of seeds from the berries, there were no lumps of fruit remaining.

Moving on to the Juice programme, I first added small chunks of orange and set it blending. This was a particularly loud programme, rising to a pitch that drowned out conversation, but the orange juice it produced was worth it. As a drink with pulp it was fantastically smooth and thick, while it could also be sieved to produce a good quantity of pulp-free juice. 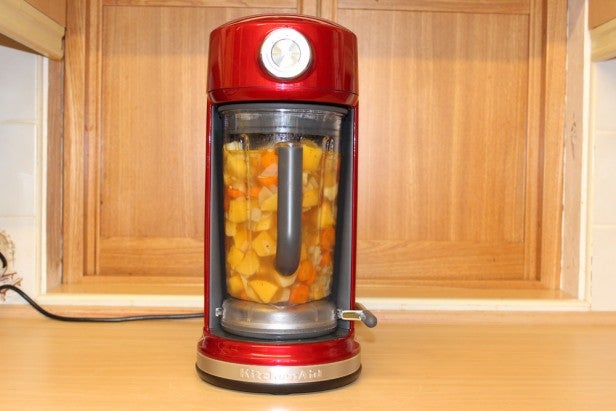 Finally, we tried the Soups/Sauces programme by filling the pitcher with hot soup made from a variety of roughly chopped root vegetables. Starting gradually, once the main chunks of vegetables had been combined into the mixture, speed increased in stages until the programme ended and the soup was made. The blended soup was velouté smooth, but so thick that it was tricky to pour from the jug. Here, the faceted sides came in handy, making it easy to scrape out the majority.

Cleaning up was effortless. While it is easy to rinse or wash by hand as you go, all the parts of the blender that food comes into contact with – the funnel, measuring cup, lid and jug – are dishwasher-safe, making it convenient as well as clever. 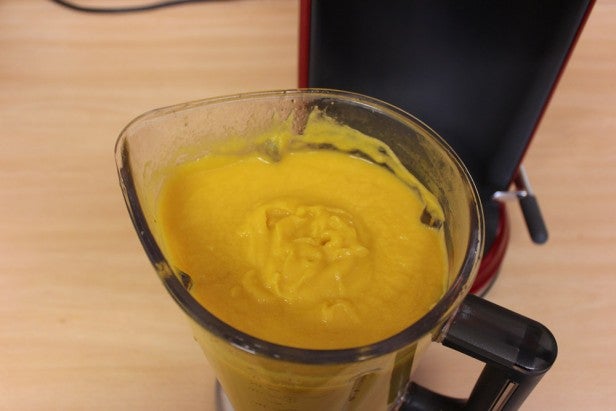 Should I buy the KitchenAid Artisan Magnetic Drive Blender?

With few parts that will wear out, a high-powered motor and a pleasing robustness, the Artisan Magnetic Drive Blender may be the only such unit you buy for years to come. For keen cooks, and those who regularly like to make cocktails and smoothies, it’s well worth the outlay. But if you blend only occasionally, this model may not offer the best value for money.

With little that hasn’t been considered in its design, operation and user experience, the KitchenAid Artisan Magnetic Drive Blender is easily one of the best such products I’ve ever tested.