KitchenAid Artisan 6L – At a glance

The KitchenAid 5KSM6521X stand mixer is designed for volume baking and cooking – it claims to be able to handle up to 1.6kg of flour, knead dough for six loaves of bread, make nine dozen cookies or mash 2.95kg of potatoes.

A step up from the smaller Artisan model, it still boasts a reliable direct-drive motor, and although it’s taller, its footprint hasn’t been vastly increased – there’s only a few centimetres added to the width and depth. It does everything the smaller model can, such as mixing, kneading and whipping, but more of it with the power to handle the extra load. 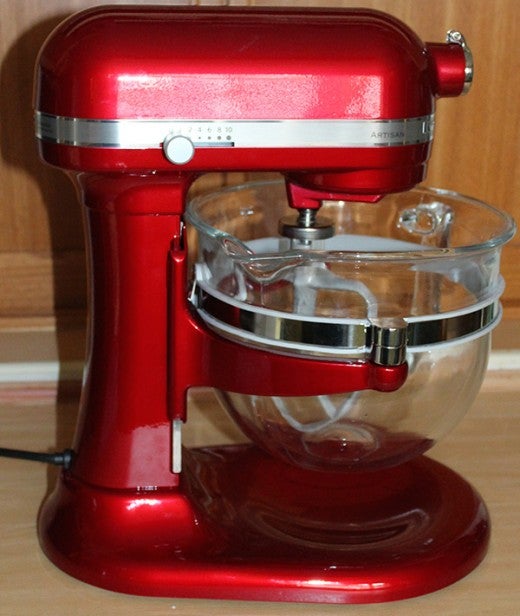 The sleek lines that secured an iconic status for the KitchenAid Artisan are still present in the Artisan 6 litre bowl-lift stand mixer, but its height has been increased to accommodate a deep glass bowl.

Similarly, there’s a handle at the back that turns 180 degrees to raise the bowl up, before locking into place, and a pair of arms that support the bowl. Its streamlined design also means there’s only a few places for splashes to hide and it’s easy to wipe down.

Unlike other stand mixers that tend to be made from plastic, the Artisan 6 litre bowl-lift model has a body constructed from die-cast zinc, as well as metal gears and control knobs, which give it a feeling of solidity. It also increases its weight to a hefty 13.1kg (with its accessories), so the machine is best left out on the worktop, both for practicality as well as showing it off. A good-sized power cable (129.5cm) gives flexibility about where it can be stored and used.

Where it disappoints is the range of colours available for its robust enamelled finish. The Artisan range is well known for its choice of shades but the 6 litre bowl-lift mixer only comes in three – Empire Red, Candy Apple and Frosted Pearl.

Appearances aside, this is no display item. There are three attachments – a flat beater for general use and heavy tasks, a six-wire whip for adding a light texture to batters and a powerknead spiral dough hook, shaped to reach every part of the bowl – as well as the option to add more.

Ten speeds, ranging from slow stirring to fast beating give good control while each has a ‘soft start’ to help prevent splashes. Finally, it comes with a handy lid that fits over the glass bowl, so you can prove dough or cover it during storage. 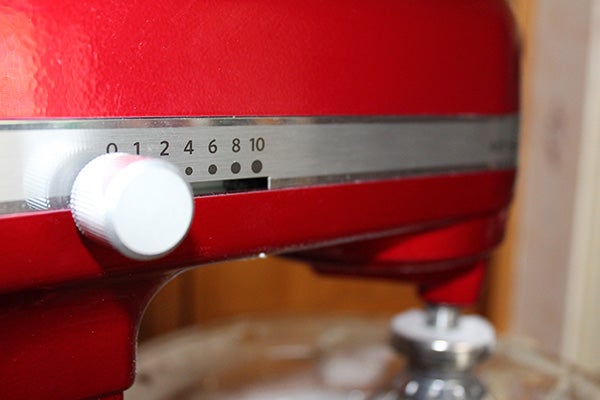 Fitting the bowl and tools can be a little tricky at first – the bowl sits on a pair of pins while slotting over a lug at the back, while the attachments push upwards until they click and then turn into place – so it’s best to have a practice without ingredients. The tools are positioned to avoid scraping the bottom of the bowl, but this clearance can be adjusted manually if it’s too high or low.

Simple controls are a plus – a numbered slider takes the machine up through the power levels, with no need for a display. It gets up to speed rapidly from the ‘soft start’ and the slider also makes it simple to shut it off with just one flick from right to left. No splashguard means flour puff is a risk if you cycle up too fast, but the capacity of the bowl helps to offset it. The glass bowl really comes into its own by being able to see what’s going on inside and adjusting the speed to suit. 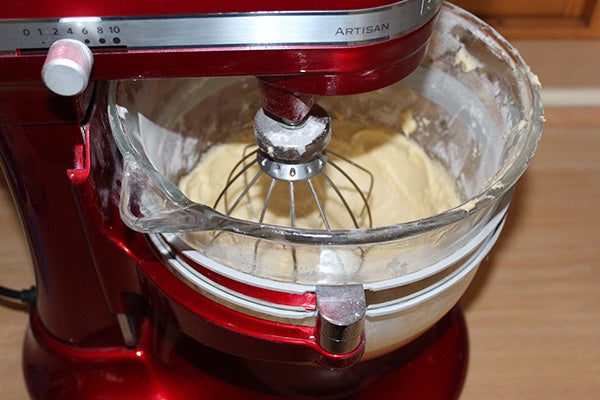 More importantly, it’s quiet enough to be used in an open-plan room, at only 77dB on speed 10, and incredibly stable – it didn’t budge a millimetre or vibrate, even when whipping at top speed.

The mixing is everything you’d expect. It’s thorough thanks to an efficient planetary motion, with minimal scraping required for a basic sponge cake, and fast.

Proving once again that this machine is for keen bakers, it helps to have some knowledge of the right consistencies to prevent accidental overmixing – although the tool and speed recommendations in the manual are helpful.

Using a combination of the flat beater followed by the whisk gave a creamy cake batter that incorporated enough air to produce a light, fluffy sponge when baked. Likewise, bread dough came together rapidly and rose well. 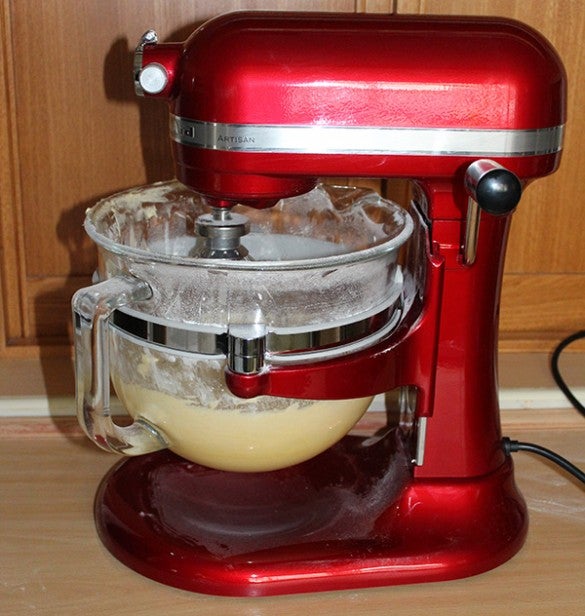 Should I buy the KitchenAid Artisan 6L?

If you’re a keen, high-volume baker, entertain regularly or batch cook, the KitchenAid Artisan 6L will definitely prove its worth, plus it has a five-year guarantee. As a combination of good design, upsized capacity and practical functions, it’s hard to beat but you may find it difficult to justify the price tag if you don’t use it often. The machine’s size means it’s also a bit of a space hog, too.

Not one for the novices, but a great investment if your existing stand mixer is limiting your baking horizons.