SSDs are coming thick and fast nowadays with performance and price varying wildly. So more than ever it makes sense to find the right balance for your needs. As such we’re today looking at one of the cheapest 64GB 2.5in SSDs we’ve found, the Kingston SSDNow V Series.


Unlike Kingston’s first generation of SSDs, which were rebranded versions of Intel’s range, the SSDNow Series are Kingston’s own. They’re available in 64GB and 128GB capacities and desktop and notebook kits or just stand alone. The desktop kit, which we have here, includes mounting brackets and screws for fitting the drive in a standard 3.5in desktop PC hard drive bay, a SATA cable, and a Molex to SATA power adapter. You may have problems fitting the mounting brackets in some of the proprietary screwless mounting mechanisms on some cases but we tried a few and they seemed to work alright. 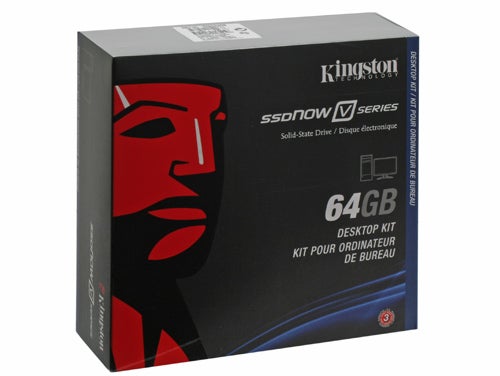 The notebook kit meanwhile comes with a 2.5in USB external enclosure and matching USB to miniUSB cable and some drive cloning software. WIth this lot you can simply plug the drive into a USB socket on your notebook, copy across all the information from your previous drive, and swap the drives over, giving you a seamless upgrade.


The drive itself uses a tweaked JMicron 602 controller that has 64KB of cache (as opposed to the version used by the OCZ Apex which has 16KB of cache and suffered from severe stuttering issues). The memory chips themselves use MLC technology to store their data so this isn’t going to be the fastest drive on the planet but then, that’s what the V stands for; value. 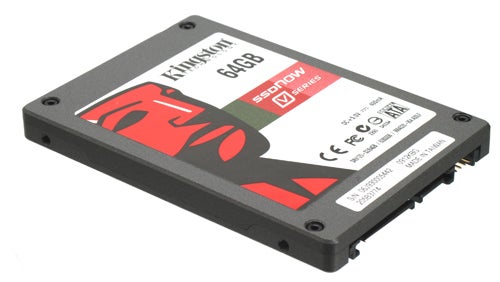 Kingston claims the V Series has a read speed of 100MB/s and a write speed of 80MB/s, which is relatively low compared to some of the crazy numbers we’re seeing nowadays but if these are consistent figures – i.e. the drive doesn’t suffer from the stuttering observed with the OCZ Apex – then they are perfectly acceptable for most applications and are ample for notebook use. Moreover, when combined with the lightening fast access times of SSDs, overall responsiveness of your operating system should be markedly improved, even if it does take a little longer than some drives to move about large volumes of data.


Physically, the drive is everything you would expect; it measures 69.85mm x 100mm x 9.5mm, the screw holes are in the standard position, and the SATA connectors are where they always are. The only thing that’s of note is the rather fetching rough aluminium shell that should keep this drive’s insides well protected.

To assess the drive’s performance, we used our usual test bed:


We started our testing by adding the drive as a blank, unformatted slave drive to our test bed then ran the read and write tests of the defacto standard benchmarking app, HDTune.

As can clearly be seen, the V Series is not the fastest drive in the world but those claimed read speeds of Kingston’s do hold up. The dip in write speed to 18MB/s is a bit alarming but looking at the full graph (see page 4) it is clear these dips in performance are not particularly frequent and nowhere near as drastic as those of the OCZ Apex.

Next we installed Windows on the drive and ran the hard drive tests from PCMark Vantage. This application does tend to favour SSDs over normal hard drives so is of limited use when comparing them to HDDs but it gives a good indication of performance differences between SSDs.

Here we can see that the V Series is a consistent if rather slow performer. As mentioned earlier, though, the raw read and write speed is only of so much importance. So long as this drive still exhibits the snappy response that you expect from an SSD, has sufficient read/write performance, and doesn’t suffer too much from stuttering it will be worth considering.


Next we ran our gaming test whereby we perform one run through of our standard Crysis time demo and time how long it takes. Graphical settings and resolution are kept to a minimum to ensure as much time as possible is spent loading and unloading the game.

The V Series puts in an impressive display here, beating the very fast OCZ Vertex drive and clearly proving it’s not all about statistics when it comes to real world performance. That said, the VelociRaptor and Intel SSD are still markedly ahead.


For our penultimate test we record how long it takes to bootup, restart, and shutdown our test system. Once again, we see that the V Series holds its own against the competition even beating all before it in the reboot run.

Finally we simply used the system for a while to get a feel of how it responded and we found it to have all the speed and snappiness that we’d expect of an SSD. Smaller programs open almost instantly (large programs like games still take some time) and you can open or close hundreds of files in a flash. Obviously it’s not quite at the level of the enthusiast or performance drives like Intel’s models or the OCZ Vertex but for around £100 it provides all the performance we’d expect.


The Kingston SSDNow V Series 64GB isn’t the fastest drive on the market and compared to hard drives it’s still expensive for its capacity. However, it does provide adequate performance and for around £100 is an absolute bargain compared to many SSDs. 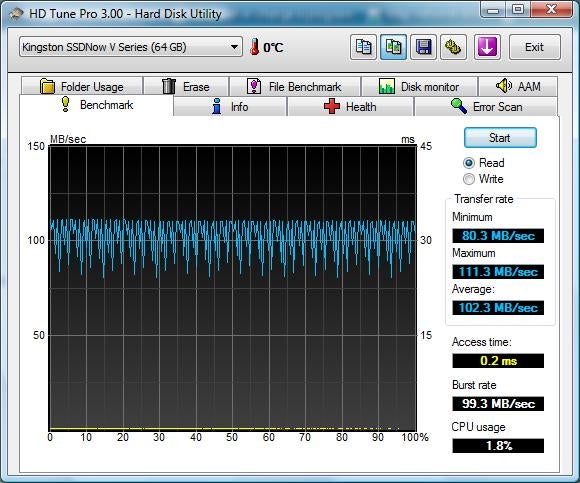 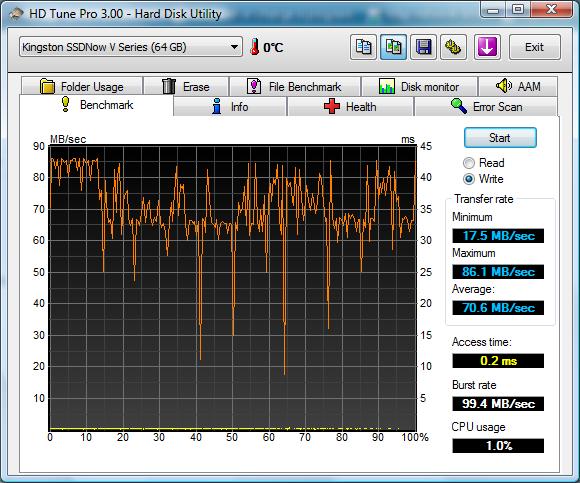