My mother-in-law is sure that games are a complete waste of time. Although she’s come to terms with the fact that I make a living playing and writing about such silly things, she still informs me of her opinion on a regular basis. Normally I raise a stout defence. After all, isn’t a Mario or a Zelda a million times more inventive and engaging than the average thing you see on TV? Don’t a Sim City, a Total War or a Civilization have educational value? Aren’t Bioshock and Ico fine artistic achievements? Don’t games like World of Warcraft build real communities that might never have otherwise existed?


Sadly, the more I play Kingdom Under Fire: Circle of Doom, the more my belief in the value of games falters. If all games were like this, I’d have to concede that my mother-in-law has a point. 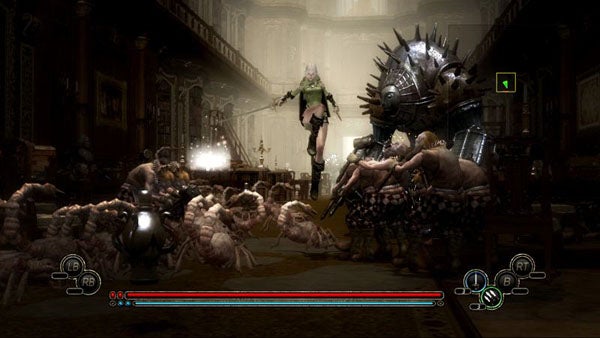 You see, on the first Xbox, the Kingdom Under Fire series built a cult following for its unusual melange of RTS and RPG elements with the kind of mass-scale combat you’d find in the Dynasty Warriors series. The series original Korean publisher, Phantagram, has already produced a similar title on the 360, Ninety Nine Nights, only with the RTS elements all but removed. Now it’s the turn of the developer, Blueside, to bring the series into the HD era. The only thing is that, rather than follow the existing template, Blueside has decided to take its Kingdom Under Fire in a new direction. The result, Circle of Doom, is best described as a cross between Ninety Nine Nights and Diablo. It doesn’t quite have the large-scale battles of the former, but in exchange you get the kind of levelling, armour and weapon upgrade systems of the latter. It’s basically a whacking great hack-and-slash action RPG. 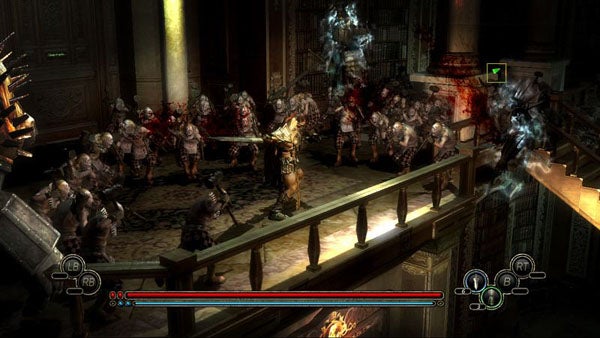 Let’s get the praise out of the way quickly. Like Ninety Nine Nights – and it’s hard to believe that the two don’t share the same engine – Circle of Doom is a lovely looking game. The characters and creatures are well designed and lovingly detailed. The environments, particularly the woodlands you’ll fight through early on, are bursting with eye-candy, whether gorgeous flora and sparkling waters or detailed interiors with nice dynamic lightings. Everything is covered in a nicely graduated soft-focus blur, and the overall effect resembles one of the old cover paintings you used to get on ropey fantasy novels in the seventies and eighties; the classic Boris Vallejo and Frank Frazetta stuff. The animation is excellent, and there are some fine effects once you start wielding the really mighty weapons, scattering enemies far and wide and dispensing death with every blow. It’s easily the prettiest straight hack-and-slash RPG epic I’ve ever seen.

There’s a little bit of depth to it as well – albeit only a little bit. You can choose from five playable characters to begin with, ranging from a hulking and nasty looking muscle-bound brute to a vampire prince (the Goth’s choice) and an elfin queen. As usual in this sort of thing, whacking monsters gives you experience and enables you to level up, and when that happens you can distribute points between your three major stats: health, SP and Luck. You need SP to equip weapons, armour and various support items, but also to attack with them, which means that – initially – you have to think carefully about what you wield and when you use it. You also have to think a little about how you upgrade your stats as you level up. On top of this, while you will find new weapons as you upgrade, the game also features weird idols in each level which allow you to ‘synthesize’ two or more weapons together to make new ones, adding new abilities or simply extra damage-dealing stats as you go. On top of this, you can also go to sleep, at which point your character has peculiar and slightly abstract dreams during which they can select additional combat skills to learn. The price of that handy fireball, demon hand or heal spell is usually to kill large numbers of particular types of monsters. Handily enough, this is simply giving you extra reason to do what you would be doing anyway. 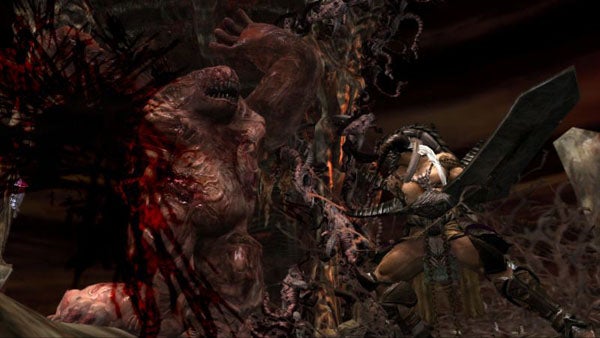 As you might expect, Circle of Doom is combat heavy. In fact, it’s combat heavy in the same way that a Quattro Formaggio pizza is cheese heavy. If you don’t really, really, really like combat, don’t go near it, because you’re going to be sick of the taste by the time you’re a quarter way through. Now, I haven’t got a huge problem with combat heavy. I didn’t hate Ninety Nine Nights because it was combat heavy, but because it was stupidly designed. I didn’t hate Diablo, Titan Quest, God of War, Heavenly Sword or Spartan: Total Warrior for being combat heavy either. In fact, I quite liked them. The problem with Circle of Doom is that it really is just a question of blundering from group to group of monsters, swinging your current best weapon with occasional breaks to use a ranged weapon, spell, special ability or side arm. There’s really no more to the combat than that. 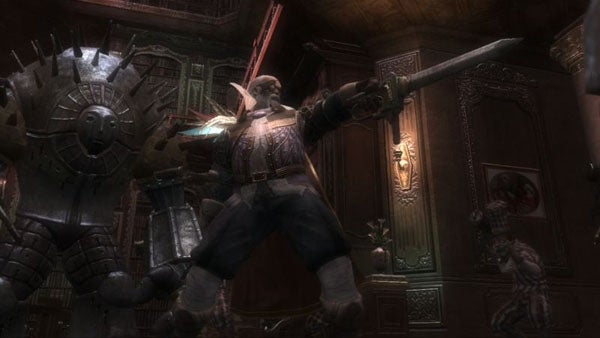 There’s no ingenious mechanic that makes you think about timing or build up to a spectacular frenzied attack. There’s no sign of any real intelligence from your enemies, who seem content to trudge dutifully towards you once activated, with only a few magic-using foes who sneak around launching their chosen spell upon you. There’s no real need for strategy, intelligence or courage or anything much beyond opposable thumbs and the sense to press the health potion key when the bar gets low. When the only parts of the game that require your active engagement are a) navigating the mini map b) managing your inventory c) synthesizing weapons and d) sorting out the stat upgrades when you level, I think it’s time to worry.

It doesn’t matter whether you’re battering hordes of Lizardmen in the forests of embracing or corpulent zombies in the all too aptly named City of Desolation, you’ll be performing the same dull actions over and over and over again. There are loads of levels, and each one is random to add replay value, but sometimes I’d rather have a smaller selection of well-designed, tightly orchestrated levels in which I actually had more fun. As it is, it’s just a question of what will happen first: will you reach the end of the current series of levels and beat the boss, or will your brain start to atrophy and you lose the will to live. 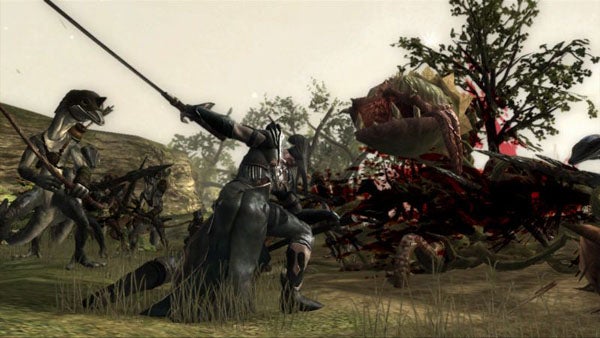 Luckily, two things stand in between Circle of Doom and complete disaster. Firstly, even in a game as fundamentally boring as this there remains something compulsive about levelling and upgrading. Secondly, you can drop in and out of four-player online games at will and – if you wish – open yours so that others can do the same. You can use the same characters across both online and offline games, and it’s actually easier to level up your character by joining more advanced online games and then return to your own game afterwards. The only problem is that the more powerful you become, the less challenging – and so more tedious – the game becomes. 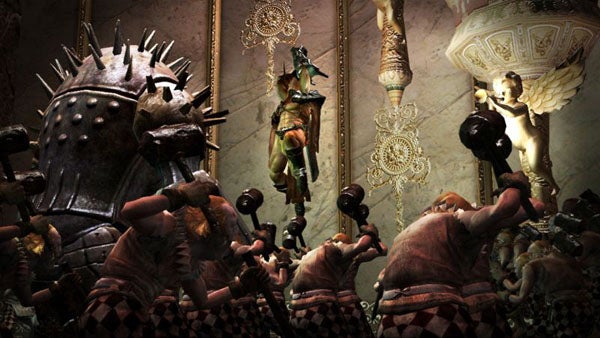 Still, by playing with three strangers, the dreary hack-and-slash action suddenly seems a little less, well, dreary. If you had a few friends who liked dungeon crawling, you might even find it vaguely enjoyable as you batter hordes of goblins and skeletons together and trade boasts over who has the biggest and most baroque broadsword or the most intimidating hand-cannon. Indeed, the fact that there are people out there with Level 86 characters shows that the game must have some long-term draw – even if its simply a case of grinding until you have a character and a weapon so ridiculously powerful that you can play with Level 5 newbies and dazzle them with your sheer awesomeness. To be honest, I just think of the hours involved and shudder. 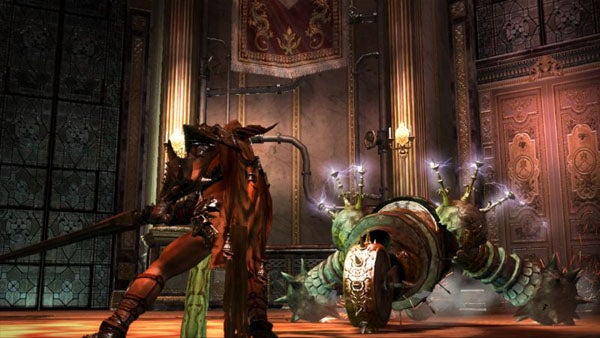 The fact is, if I wanted to spend my time grinding so I could have a character and a weapon so ridiculously powerful that newbies would be dazzled with my sheer awesomeness, I’d rather do it in Lord of the Rings Online or World of Warcraft and have a bigger audience. If I wanted to hack-and-slash at creaking skeletons until the cows come home, then I’d rather do it in Titan Quest – or even Diablo II for that matter. I know that some Xbox 360 owners won’t have that choice, but there are plenty of other games out there that will keep them far more entertained than this. And if you’re not being entertained, what’s the point? As my mother-in-law would surely say, what a complete waste of time.


The graphics are glorious, but gameplay-wise this is one of the weakest hack-and-slash RPGs around. Even given the solid drop-in, drop-out multiplayer options, Circle of Doom is best avoided.