LED technology has meant that today’s flatpanel TVs are slimmer than Real Madrid’s chances of making the Champions’ League final, but when you put one next to a set of chunky home cinema speakers it can look a little odd visually. But KEF is out to change all that with its T Series speakers, the main selling point of which is their super-slim design. Primarily designed for wall mounting they measure just 35mm deep, bringing you the sort of killer home cinema sonics that KEF is famous for without looking out of place alongside your TV. 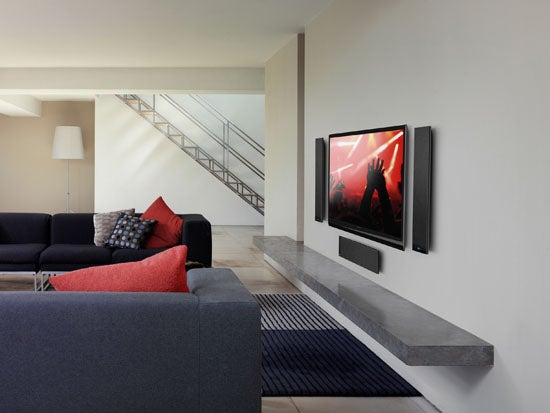 KEF offers three packages within the T Series. On test here is the T205 system, which features a pair of T301 fronts, a pair of shorter T101 speakers for the rear channels and the T301c centre speaker, as well as the T-2 subwoofer found in all the packages. If you fancy an upgrade, the T305 system uses the superior T301s for all channels with a T301c again on dialogue duties. Sitting below the T205 is the T105 system, which uses lower-spec T101s for the fronts/rears and the T101c centre. Got that? Good.

They may be slim, but the T301 and T301c boast heavyweight build quality. Their faultless construction offers a rigidity and robustness that should stand them in good stead for life in the living room. The front panel of these 600mm-high speakers is almost entirely covered in a cloth grille with glimpses of black aluminium down the sides and gloss-black at the bottom. It doesn’t jump out and grab you, but that’s the point – they’re designed to be a sleek, minimal accompaniment for your slinky flatpanel TV. 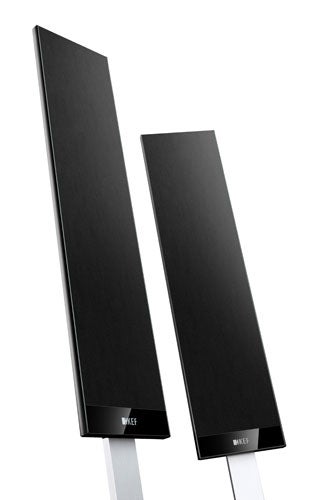 On the back the slightly rubberised texture adds to the stunning build quality, and to keep the back panel nice and flush for wall-mounting there are no binding posts or springclips – instead they provide downward-facing holes for the speaker wire with tiny Allen screws to hold them in place. The T101s are styled in exactly the same fashion, except they’re 270mm shorter and have a slightly different driver arrangement.

The subwoofer also does its best to blend in with your décor with its compact dimensions and stylish black finish – perfect for slinging in the corner of the room. It’s heavier than you’d expect for the size, which is reassuring, but putting the controls on the bottom was a slight design misstep as it means you have to lift it up whenever you want to make any adjustments.

The front and rear speakers can be installed in three different ways. Wall-mounting is the obvious choice, and you get all the relevant brackets in the box to do the job, but you also get table-top stands (which need to be assembled and screwed onto each speaker) or you can fork out for KEF’s optional floor stands, a pair of which will set you back around £200. 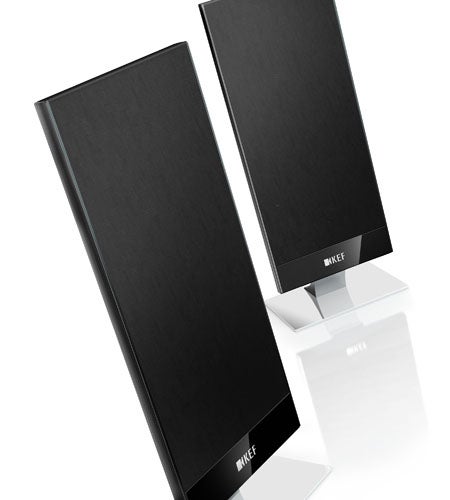 Hidden inside these stands are crossover components that optimise the sound when stood in free space. But as standard the speakers are optimised for table top or on-wall use.

The T301s are a two and a half way closed box design, fitted with two 115mm midrange drivers that KEF designed specifically to squeeze into these slim profile speakers. The suspension and magnet system have been moved to the side of the voice coil, while the flat but rigid diaphragm has been ribbed and braced with dual aluminium discs. 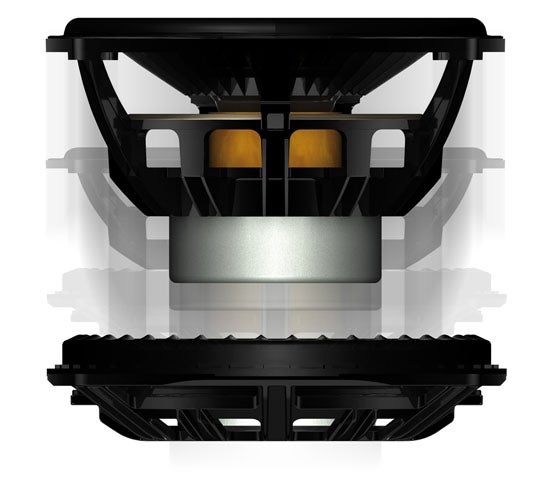 It’s joined by a 25mm tweeter that has been vented to achieve clearer midrange sounds. The T101 rears are a two-way design, using a single 115mm midrange driver and 25mm tweeter. 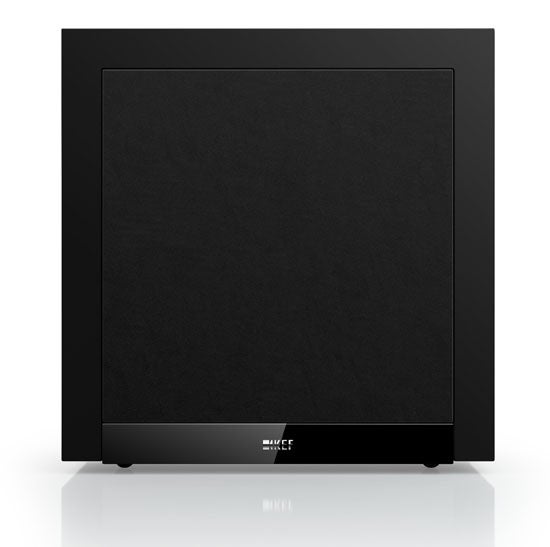 The powered subwoofer boasts a 250mm woofer and 250W Class D amplifier, delivering a frequency response down to 30Hz. On the bottom is a line-level phono input and switches controlling Bass Boost and phase control.

In action, the T205 is sensational. Running through our regular gamut of test discs – Inception, Hellboy II, Avatar and Iron Man 2 – the system delivers an explosive and aggressive sound that thrills in ways only previously achievable through the use of hard drugs.

We’re particularly impressed by the ferocity with which it spits out the Monaco Grand Prix scene in Iron Man 2. As drivers rev their engines on the grid, the KEFs nail the paint-stripping rasp of the engines and back it up with a bed of bass so deep and powerful you might want to stock up on Blu-Tack for your treasured ornaments. 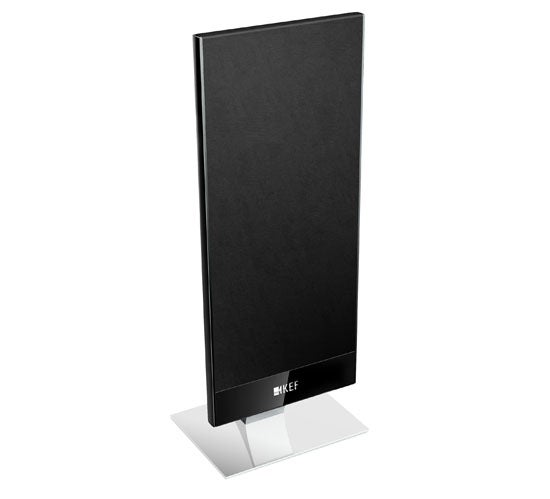 During the race, the system doesn’t let up for a second, firing out effects with breathtaking force, whether it’s sliced-up car parts crashing to the floor, the crackle of electricity, screeching tyres or the pounding score in the background. These effects lose none of their clarity with our Onkyo amp’s volume cranked up to 75 per cent – no mean feat given the slimness of those cabinets.

And as we listened to these scenes, we always had the sense that the speakers were all singing from the same hymn sheet – there’s a seamless crossover between the sats and sub, and there’s absolutely no variation in tone as sounds are pinged between the centre, rears and fronts. The centre speaker consistently projects dialogue with remarkable clarity, but with a hint of depth that makes speech seem life-like. 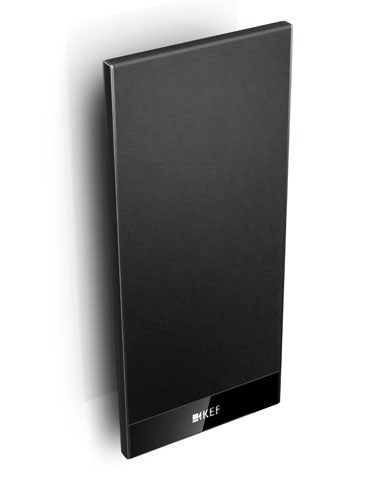 Despite its unassuming appearance, the T-2 sub is actually the heart of the system. Not only can it muster dollops of powerful, punchy bass during showcase action scenes without suffocating the other speakers, but it’s also agile and subtle enough to discreetly pad out quiet scenes without you really knowing it’s there.

But the T205 is about more than flat-out muscle-flexing. During quiet passages the speakers create an immersive soundstage by filling it out with subtle details, and this is most apparent during Avatar’s frequent forest expeditions. You’re plunged into a cloud of chattering creatures, softly rustling foliage and swirling, other-worldly effects that some inferior systems struggle to reproduce with the same level of clarity. Whether it’s quiet or loud, action scene or talky bit, high-frequency reproduction is mesmerising.

Its superior power, drive and clarity are what set this system apart from cheaper speaker systems like the superb Tannoy HTS-101, which is great but not in the same league. That’s not surprising with a price tag around £1,000 dearer, but even so it’s the perfect demonstration of getting what you pay for. It also compares very well with similarly-priced systems like the Jamo D500 or the Monitor Audio Bronze, although we fancy that the Jamo’s levels of all-round depth and THX-mandated potency give it a slight edge – but with those, you don’t get the KEF’s super-sexy design. Swings and roundabouts… 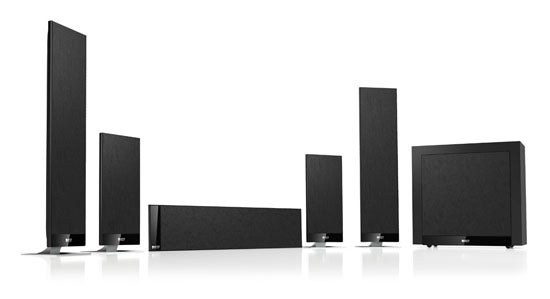 With music – in this case Dolby’s The Sound of High-Definition sampler Blu-ray, Adele’s 21 on CD and a couple of Japanese jazz DVD-Audio discs – the T205 reveals KEF’s true musical colours with a smooth, neutral rendition of every track we threw at it. Voices are clean and pure, rhythms are water tight and the intricate detail handling means instruments are accompanied by the subtle sounds of the person playing them, such as breaths and nails on guitar strings. Using the front speakers as a stereo pair isn’t advisable, however, as they lose the warmth and punch afforded by the subwoofer – possibly the only time we lamented the lack of more voluminous cabinets.

The T205’s main selling point is their chic slim-profile design, but thankfully that doesn’t mean they compromise on sound quality. Far from it. They deliver an astonishingly potent sound, which is a remarkable feat from such slim enclosures, plus the T-2 sub backs it up with ferocious low-end grunt. They’re not cheap, but after spending some time in their company we guarantee you’ll think it’s money well spent.