Of the four biggest names in the camcorder business, JVC has always been the most quirky. But the company’s maverick status has also allowed it to pioneer some of the more interesting trends. The upright palmcorder format was launched by JVC, and its Everio range was the first to use a hard disk for recording in the consumer market. JVC is also the only one of the Big Four to compete directly with the pocket Internet camcorder format epitomised by the Flip. However, its first attempt, the PICSIO GC-FM1 was somewhat mediocre. With the second incarnation, the PICSIO GC-FM2, JVC hopes to put things back on track.


The FM2 is significantly different to its predecessor. Chief amongst its innovations is a 3in touchscreen, which fills most of the back of the device. This takes over the entire gamut of functions and settings, with a power button on the side the only remaining discrete control. In camcorder mode, the video preview only fills a portion of the screen at the top, with the remainder containing the controls.


Having the preview only at the top of the display seems like a waste, although this is mostly dictated by the necessity for video always to be shot in the correct orientation. There aren’t that many functions to control, either. You can trigger record and zoom, although the latter only offers 4x digital telephoto, not optical, so will sacrifice resolution when used. There are a few manual settings available, including a selection of digital effects. A Wind Cut filter can be enabled, too. The FM2 even has image stabilisation, something no other models in this class offer, although you can’t turn this off. 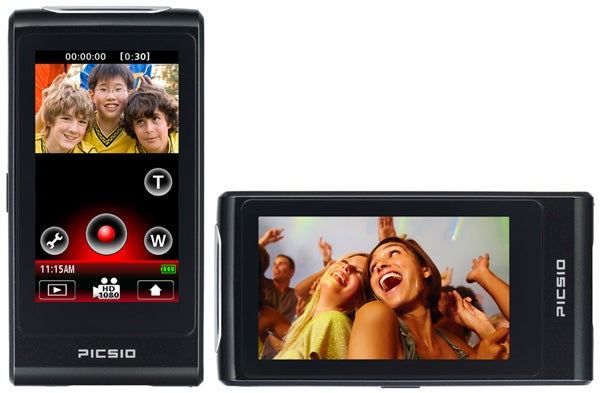 You also have a modicum of control over exposure via the Touch AE function. This now familiar function allows you to indicate the reference point for metering by touching it within the frame. This only affects exposure, however, as the lens is fixed focus. The animations that accompany each new menu screen are a tad time consuming as well, and could do with being toned down.


You can switch the camera to use most of the display, but strangely, the FM2 only grabs 2.7-megapixel stills in this mode. The other function that uses the screen in landscape mode is the video and stills playback interface. This provides a conventional thumbnail grid and plays back your clips to fill the entire area. 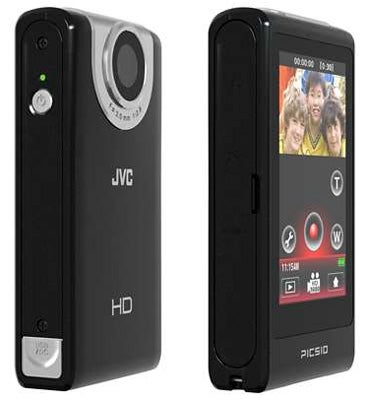 Video and images are recorded to removable SDHC flash memory, and there’s no storage integrated into the device itself. With the top video format using a fairly healthy 12.5Mbits/sec, a 4GB card will be enough for a little under 45 minutes of footage. The FM2 also supports Eye-Fi SDHC cards, which combine Wi-Fi networking with Flash memory, allowing you to share your video and photos wirelessly. Under the same flap as the SDHC slot is a mini HDMI socket and AV minijack.

We never expect pocket Internet camcorders to excel in performance, due to their small, fixed-focus lenses. But the FM2 at least outperforms its competitors. Thanks to the Full HD video resolution, there’s plenty of detail, although the image is nowhere near as sharp as higher-end Full HD camcorders. Colours are reasonably faithful, and the camcorder deals quite well with highly contrasted lighting. Thanks to the Touch AE facility, you can compensate for underexposed foregrounds when shooting against a bright sky, too.


With its large CMOS sensor, the FM2 also promises good performance in low light, and the camcorder does indeed excel in this area compared to other models in this class. The pocket Internet camcorders already do better than you would expect for their price, but the FM2 shoots bright footage at lower levels of illumination than the Flip Video MinoHD Second Generation, and indeed any other camcorders at this price, although colours aren’t entirely accurate.

As with all pocket Internet camcorders, the device itself is only a portion of the product. Cunningly concealed in the base of the unit is a USB 2.0 plug which slides out using a switch on the bottom. It doesn’t protrude very much when fully extended, but JVC also includes an extension lead for this in the box. The software itself is somewhat unusual, starting with its name. Called LoiLoScope EX, this application has a strangely freeform interface, where you can drag elements around and zoom in and out. 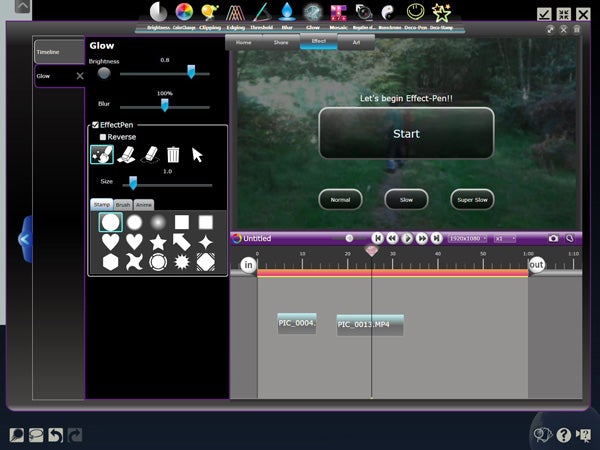 The range of software features is extensive, and more than other pocket Internet camcorders. You can trim your clips, create titles, and add complex effects. The latter include brightness adjustment and fancy filters like mosaic, and each one has considerable range of parameters available. The output options are similarly comprehensive, with the ability to upload directly to Facebook and Vimeo as well as YouTube. 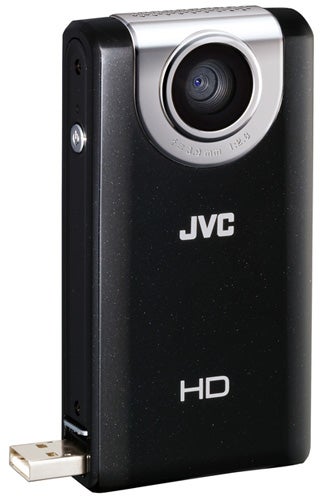 
The pocket Internet camcorder phenomenon felt like a passing fad when it first arrived, and there’s no doubt it will be consumed by smartphones sooner or later. But, for now, the devices are developing, and gaining new features to improve the quality of point-and-shoot instant Internet upload videomaking. With its touch-exposure, image stabilisation and Full HD resolution, the JVC PICSIO GC-FM2 is currently the most fully featured pocket Internet camcorder on the market. Even though its £160 price is a little much, considering you still need to add your own memory card, if you’re after a camcorder in this format, it’s the most capable example yet.