The pocket Internet camcorder has clearly made a huge impression on the market. Whilst the big names continued to release updated versions of essentially the same concept they had been manufacturing for decades, Flip and its ilk rewrote the rulebook from a more mobile phone-oriented perspective. Now, however, mainstream camcorder makers are starting to do more than just pay lip service to this new trend by merely including YouTube upload software with their models. They are beginning to release products taking the best elements of the Flip UltraHD or Creative Vado HD, but adding more features. Our first taste of these new potential Flip killers is JVC’s PICSIO GC-FM1.


The main differentiation between the PICSIO and its pocket Internet foe is that it shoots 1080p video rather than 720p. This isn’t Full HD, however, with the resolution being an anamorphic 1,440 x 1,080, as with HDV and some AVCHD formats, recorded at 30 frames/sec. The FM1 also offers 720p at 60 frames/sec, plus VGA at 60 frames/sec, and even 320 x 240 at 30 frames/sec. There is only 34MB of storage on board, so you will need to factor in an SDHC card. At the top resolution, video is recorded at a respectable 12Mbits/sec, meaning you can fit around 10 minutes of footage per GB of storage. The video is compressed using H.264, so the top data rate is relatively generous for 1,440 x 1,080 footage.


Another generous allocation is the sensor. Where many pocket Internet camcorders sport already impressive 1/4in sensors, the PICSIO goes even larger with a 1/3.2in CMOS, which boasts a whopping 8.17-megapixels. Since this is also a digital camera, the high-resolution sensor allows still images at up to 3,264 x 2,448. Unfortunately, JVC has followed the trend in this class of camcorder, and only offers a digital zoom, not an optical one, although this is 4x compared to the UlraHD’s 2x. Image stabilisation is also of the electronic variety rather than optical. 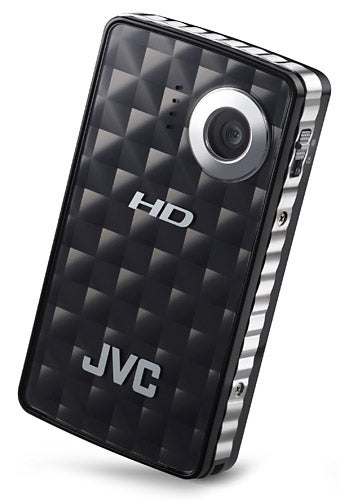 The PICSIO doesn’t provide much in the way of features, either. There’s a rather flimsy-feeling switch on the side for enabling macro mode, and although a full D-pad and a host of buttons can be found on the rear, they don’t do very much. You can toggle between camera and camcorder, or record and playback modes. The D-pad controls the digital zoom in the up and down direction, and resolution in the left direction. This involves pressing the left arrow twice in rapid succession to cycle through the video or image modes.


Despite its superior video resolution and digital camera capabilities, the PICSIO is actually considerably smaller than the Flip UltraHD, and slightly shorter even than the Creative Vado HD. But it doesn’t have a built-in USB plug, instead relying on a separate cable. This is also the only way of recharging the PICSIO, via a host computer, as no separate charger is supplied in the box. There is a mini HDMI socket as well as a minijack for analogue AV connection. However, whilst JVC supplies a cable for the latter in the box, it only offers composite video output. You will also need to supply your own adaptor to hook up the mini HDMI to the full-sized variety found on HDTVs.

One area where we have been pleasantly surprised by pocket Internet camcorders in the past is the image quality. Whilst you get absolutely no control over things like the effects of backlighting, and are stuck with a fixed-focus lens, the results are regularly beyond expectation. In the PICSIO’s case, with good lighting the image is a little dark compared to some camcorders, but colours are quite vibrant and there’s plenty of sharp detail thanks to the 1080p resolution. Video is actually clearer than any pocket Internet model we’ve tested so far. Whilst you get slightly smoother motion with the 720p, 60 frames/sec option, the image quality drops, so most of the time you’ll want to stick with 1080p. 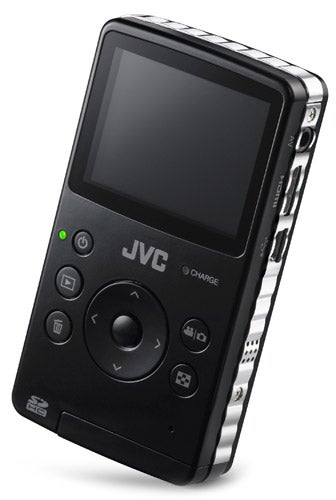 Low light performance is even more important for a camcorder in this class, as the likelihood of you whipping it out of a jacket pocket indoors is greater than with a regular consumer-oriented model. This has always been the Achilles’ heal of budget camcorders, which thankfully the Flip managed to avoid. We’re also pleased to report that JVC’s PICSIO has avoided this deal-breaking trap as well, and in fact improves slightly on the UltraHD’s abilities. The PICSIO’s image is slightly darker in low light than the UltraHD’s, but marginally sharper and with fewer multi-coloured artefacts. Overall, low light ability is not brilliant, but more colour is retained at worse illumination than most camcorders in this price bracket.


As the PICSIO is intended to go head-to-head with pocket Internet models, the on-board software is also reasonably important. The PICSIO comes with MediaBrowser LE from Pixela. When you first plug the camcorder into your computer, you are prompted to install this. Subsequent connections will load MediaBrowser LE automatically. 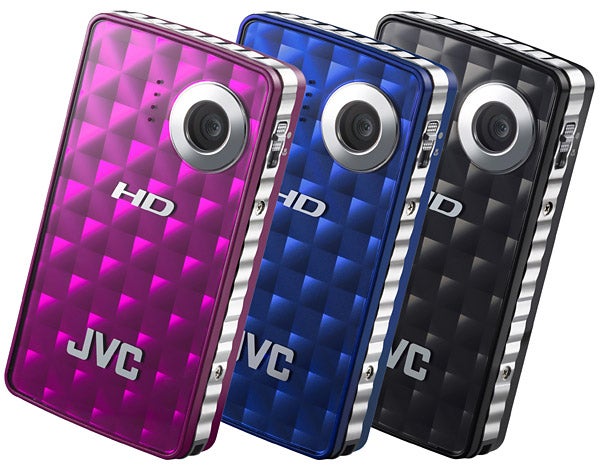 However, the software is not as fully featured as that provided with the latest Flips, or even Creative’s Vado HD. It allows you to browse the video and photos on the device as a list or by date on a calendar. You can also watch clips and upload straight to YouTube, with the facility to remember multiple accounts. But there are no trimming, titling or effects capabilities, in fact no editing options at all. There is also no Mac OS version included, although the MOV files the PICSIO uses will be readily compatible with iMovie and the device itself will show up as a removable volume when connected via USB.


We have to admit to being mostly impressed at how JVC has met the challenge of the changing camcorder market with the PICSIO. Like every other pocket Internet model it has major limitations, thanks to the fixed-focus lens and complete lack of manual settings. Despite this, the GC-FM1 is capable of decent video and reasonable performance in low light. It’s also competitively priced, although you do have to factor in a small extra cost for SDHC media. However, Sony’s HD Snap MHS-PM1 offers similar specifications, and an even larger 1/2.5in sensor. So we’ll reserve final judgement until we get that in for review.