We’ve recently checked out – and been moderately pleased with – sets from relatively low down JVC’s current LCD TV range. But today we’re pleased to say we’ve got our hands on something higher up the brand’s pecking order in the shape of the LT-42DV8: the first JVC TV to carry that feature du jour, 100Hz processing.


For those of you who’ve not come across 100Hz before in any of our previous LCD TV reviews, it’s actually a revival of a system originally developed to counteract the old flickering effect of CRT TVs, and it involves doubling the usual refresh rate of PAL TV signals from 50Hz to 100Hz.


With LCD the purpose of 100Hz is not to counter flicker, however. Normally LCD response times mean that moving objects lose resolution as they pass across the screen, but by doubling the amount of images shown per second via 100Hz, the hope is that the usual detail loss will be avoided. 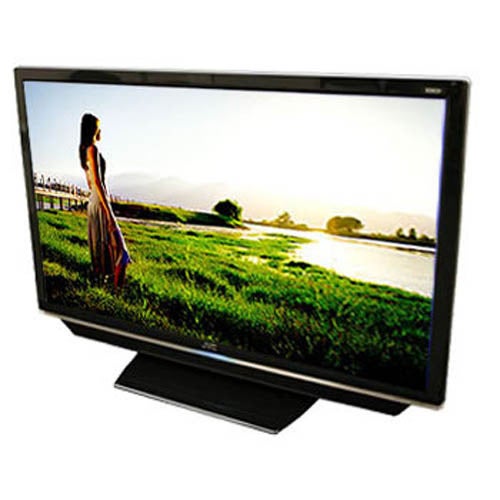 We’ve certainly seen this work with previous 100Hz TVs from the likes of Panasonic, Toshiba and Sharp. But it also has to be said that the price paid for the cleaner motion benefit in terms of unwanted processing side effects has varied greatly, with the Sharp system in particular throwing up all kinds of secondary problems that frankly more than nullify the 100Hz benefits. So let’s hope this JVC 100Hz debutante delivers all the benefits of the system without too many of the potential downsides.


How attractive you find the 42DV8 depends on how retro your tastes are. For as well as preferring a matt black finish over the trendier gloss or silver approach, it also carries a little blue neon strip light under the JVC logo that lends the TV a distinctly 1980s air. Personally we like the look, but we’re just warning you that it may not suit everyone.


The 42DV8 marks a clear step forward for JVC in connection terms, too, as we find not only three HDMI inputs, but three HDMI inputs with a v1.3 flavour rather than the more common 1.2. This makes them compatible with such features as Deep Colour (from future HD discs that may support this picture-boosting trick), automatic lip-synch correction, and carriage of HD audio formats.


That’s not the only distinguishing thing about the JVC’s HDMIs either, as it turns out that they’re also compatible with the industry’s CEC standard, allowing the TV’s remote to operate any connected, CEC-compatible source device.

And there’s more. For the HDMIs can handle the 1080p format growing in importance with the arrival of HD discs. However, surprisingly this 1080p support only covers 50/60Hz, and doesn’t extend to the ‘pure’ 1080p/24fps format now being delivered directly from Blu-ray and HD DVD discs by one or two HD players.

More mundane but still useful other connections, meanwhile, include a D-Sub PC port, component video jacks, and a digital audio output for passing on soundtracks received via the HDMIs.


The 42DV8’s key screen specifications, meanwhile, kick off with a ‘full HD’ native pixel count of 1,920 x 1,080 – a figure that matches perfectly, of course, the native resolution of the vast majority of the UK’s HD sources.


Considerably less promising, though, is the 42DV8’s claimed contrast ratio of 1000:1. This really is very low by today’s standards, and is a result of the fact that the 42DV8 does not carry any form of dynamic backlight, whereby the screen’s lamp output is reduced during dark scenes to boost black level response. The omission of such a feature on such an otherwise ambitious TV is as disappointing as it is frankly bizarre. Only time will tell how badly it damages the 42DV8’s chances. 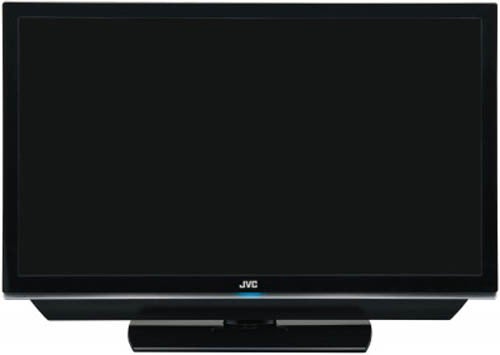 
As we settle down to watch the 42DV8 in action, one immediate plus that leaps out at you is how successful its 100Hz processing is. In fact, we’d go so far as to say that it’s the best 100Hz implementation we’ve yet seen – as you might hope from the company that first ‘invented’ 100Hz for CRT televisions.


And so objects really do move across the screen with a crispness and fluidity not seen with TVs that don’t have 100Hz. Also, crucially, there appear to be none of the common nasty 100Hz side effects such as ghosting, blocking or smearing. The JVC’s 100Hz effort just looks totally natural and unforced – which is exactly how we like it, and exactly how other manufacturers ought to be getting it.


Kudos must also go to the efforts of DynaPix HD in delivering both every tiny pixel of detail and sharpness from HD sources and also upping the clarity of standard definition sources – at least where those standard def sources are of a passably decent quality in the first place.

The 42DV8’s colours win hearts and minds too, by combining an unusual intensity that really makes the image feel exceptionally solid with vivid but generally natural tones. Plus colour blends are unusually fine thanks to the TV’s full HD resolution.


This all adds up to a TV with colours as at home with the giddy excesses of Viva Pinata on the Xbox 360 as they are with the subtle moodiness of the endless dark scenes in Poseidon on HD DVD.


So why have we only granted the 42DV8 an overall score of 8? For the simple reason that while its 100Hz almost entirely negates one of LCD’s traditional technological shortcomings, the TV falls foul of two others.

The first of these, as we’d thought may be the case, is black level response. No amount of 100Hz magic can disguise the fact that during dark scenes you have to squint through a layer of grey mist at the action going on behind. Inevitably this also leaves dark scenes looking rather short of depth, and even produces the odd off-tune colour amidst the JVC’s otherwise exemplary palette.


The other area where the 42DV8 could be improved is viewing angle. For if you watch it from much of an angle to left or right, you’ll have to put up with some pretty drastic reductions in colour saturations and contrast range.


Where the 42DV8 is pretty much flawless, though, is with its audio. The speakers that jut out from the bottom edge are unfeasibly powerful considering how unassuming they look, pumping out a soundstage of exceptional size packed with detail, clarity, clear and believable voices, and even that rarest of flat TV commodities, a healthy dollop of bass.


With the right source material, the 42DV8 is a rival for any other flat TV out there right now. And its 100Hz engine is actually the best we’ve seen.

It’s just a pity that its black level problems mean that it only looks its best for some rather than all of the time.