With everyone’s attentions turning inexorably towards exceptional slimness in the TV world right now, JVC’s HD-65DS8DDJ is about as untrendy as it’s possible to get. For not only is this 65in monster not one of JVC’s new ‘Super Slim’ flat TVs, it’s not even a flat TV! Rather, it belongs to that nearly extinct breed of TV known as ‘the rear projector’…


While this fact inevitably makes the 65DS8DDJ fatter than any slim TV around, you might be surprised to find how little fatter it is, if you see what I mean. For in fact its butt-end only sticks out 29.5cm – a measurement that’s really not as far as you’d expect from the 10-14cm depths most ‘normal’ flat TVs still employ. To reinforce this point, JVC actually does a wall mount kit for the 65DS8DDJ! All you need is a bunch of very willing mates to help, and the small matter of a wall able to handle the TV’s substantial 66kg weight. Easy. 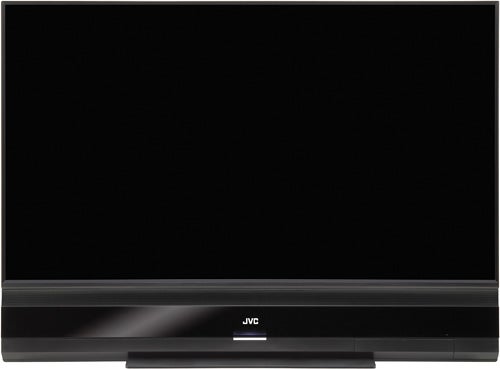 If when you think of rear projection TVs you conjure up images of those dismal black plastic hulks at your local pub in the late 1980s, with their murky picture quality, you’ll be pleased to know that things have moved on apace in the rear pro world. For as well as being much slimmer than old rear projection TVs, the 65DS8DDJ is also much more glamorous, featuring an incredibly small (barely 1cm) bezel around the entire screen acreage, and wearing a nice modern-looking silver and black finish along the bottom.


What’s more, you can even get a very tasteful floorstand for the set that gives the impression that it’s hanging in mid air – an effect that actually fools your eyes into thinking you’re looking at a flat TV, not a rear pro model.


Another big improvement for today’s rear projection models is that they no longer use the old CRT technology, which tended to have real problems when it came to correctly converging the separate red, green and blue elements of the image. Now everything is digital, with no ‘convergence’ issues to worry about. And the particular digital technology inside the 65DS8DDJ is JVC’s own ‘D-ILA’ system.


Essentially a high-resolution refinement of Liquid Crystal on Silicon technology, D-ILA has delivered some sensational results in recent JVC front projectors (the DLA-HD1 and DLA-HD100), so we have very high hopes for what it might accomplish in this rear pro incarnation – especially since we gather the projector inside is essentially a tweaked HD1.

Before we start to get into the real nitty gritty of what makes the 65DS8DDJ ‘tick’, it’s worth pausing here for a moment to reflect on a couple more rather key up-front points: the TV’s 65in screen size, and its £2000 price. For it’s in the combination of a vast screen size and low price (relative to what you’d pay for a similarly large flat TV) that the greatest continuing appeal of rear projection lies.


In other words, unless you go the fiddly, hard to accommodate route of a front projector system, there’s simply no other way to get 65 inches of pictures into your living room without spending vast amounts of cash. And in the ‘size matters’ world of home cinema, that argument surely still carries plenty of weight.


Having built the 65DS8DDJ up so nicely, though, I have to now immediately report a disappointment with the set’s connectivity: the presence of just two HDMIs. What’s more, these HDMIs are built to the v1.2 spec rather than the more recent v1.3, and so can’t handle the Deep Color enhanced picture format now output by a handful of devices – including, ironically, two of JVC’s own camcorders, the Everio HD5 and HD6. 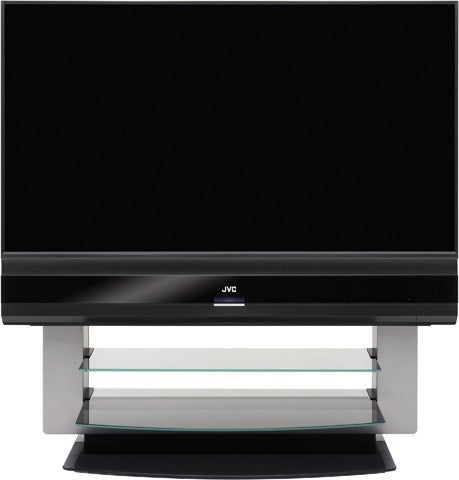 Even more upsetting, the TV can’t read 1080p/24 feeds via its HDMIs, meaning the TV can’t accept the purest form of video output possible from the majority of today’s Blu-ray players. Instead you have to set your Blu-ray player to convert its images to 1080p/60/50 for output. Boo.


However, things perk up considerably with the discovery that the TV’s native resolution is a full HD 1,920 x 1,080, while its claimed contrast ratio is a more than respectable 10,000:1.


There is a slight catch with this contrast ratio, though, in that it’s only derived with the assistance of a manual iris adjustment, so that you can dim the picture to obtain a better black level. Given the superb native contrast performance of JVC’s HD1 front projector, it seems strange to me that you should have to mess about with dimming the screen’s brightness in this rear pro incarnation. But there you go.


Another significant feature of the 65DS8DDJ is its DynaPix HD processing. DynaPix HD is a proprietary JVC system that incorporates Digital Image Scaling Technology (DIST) for enhanced resolution and clarity, as well as elements focussed on improving colours and reducing noise.


Also there to help with reducing noise is an optional MPEG noise reduction system for reducing the blocking and shimmering that can afflict low-quality digital broadcasts.


Actually, the fact that the 65DS8DJJ receives digital broadcasts at all is itself a boon, for a digital tuner was conspicuously absent from JVC’s previous D-ILA rear projection range.

Other little tweaks worth a passing mention include JVC’s Super Digipure processing for automatically optimising contrast based on an continual assessment of the source, and a rather useful little function which reins in peak whites to stop them looking ‘shiny’ (for want of a more scientific term!).


Pressed into action on the rather glorious Blu-ray transfer of vampire schlocker ”30 Days of Night”, the 65DS8DJJ provides us with plenty of reasons why it’s so wrong that rear projection has become such a neglected technology.


For starters, the sheer scale of the image is quite breathtaking. Somehow the extra 20in or so involved in going up from the popular 40-42in LCD and plasma screen size to this JVC behemoth seems to make far more difference than you’d expect, effectively turning your viewing experience from ‘TV watching’ into ‘genuine home cinema’. 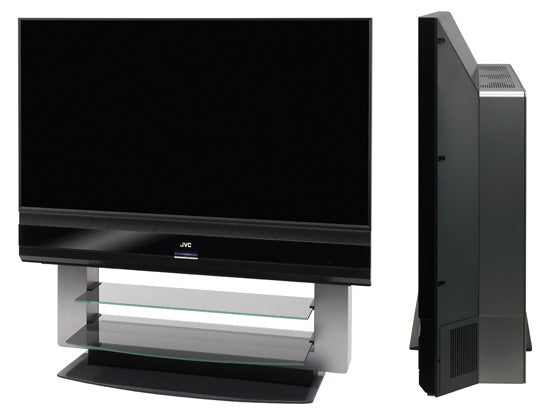 Also remarkable is how phenomenally sharp the 65DS8DDJ’s pictures are. For better or for worse (given the amount of gore on show), ”30 Days Of Night” is one of the crispest, most detailed HD transfers around, and the 65DS8DDJ picks out every last pixel of that detail with frankly forensic accuracy. Ouch.


Not surprisingly, the sort of sharpness and detail I’m talking about is all the more satisfying because it’s being displayed across such a vast canvas.


The TV’s black level response is also terrific, if anything making that 10,000:1 contrast ratio claim seem pessimistic. Dark scenes like, well, pretty much the entire film (the clue’s in the title, OK?) exhibit practically none of the grey cloudiness you see to some extent with most flat TVs. As a result the endless darkness looks completely convincing, and you can fully appreciate the depth of field of the photography (much of which was filmed on a real outdoor, village-sized set).


You also get to see in perfect clarity one or two bits of action going in the background that are actually quite hard to make out on some flat TVs, such as a vampire crawling eerily across a distant rooftop as another hapless human victim walks alone along an empty street.


The 65DS8DDJ handles ”30 Days Of Night’s” tricky colour palette with aplomb, too. Most colours in the film are deliberately desaturated, yet the set handles the tricky resulting tones pretty much perfectly.


I said ‘most colours’ back there because one colour the film certainly doesn’t desaturate is the red of the copious amounts of blood lost by the residents of the film’s vampire-ridden town. Indeed, it’s in order to emphasise the red that the film-makers deliberately desaturated the other colours. So it’s really handy that the 65DS8DDJ is just as good with a vibrant crimson as it is with the film’s subtler fare.

One final strength of the 65DS8DDJ’s picture is the fact that it’s free of the sort of side effects seen with other rear projection technologies, such as ‘the rainbow effect’ with DLP and the ‘chicken wire/screen door’ effect with LCD.


For all its good work, though, we can’t quite give the 65DS8DDJ’s images a complete rave review. For starters, its images can look a bit gritty when you’re watching HD and a bit ‘alive’ when you’re watching standard definition. Applying the TV’s various noise reduction elements can reduce the impact of these problems, but only at the expense of rather more sharpness than I’m comfortable with. 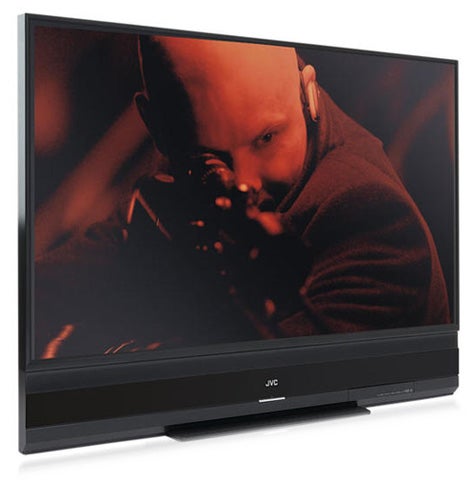 The image also flickers a little in a way I don’t think I’ve seen since the days of CRT technology, and can occasionally also look a touch duller in the corners than it does in the centre. Finally the screen can have the impact of its contrast reduced quite considerably by the amount of ambient light the screen reflects. In other words, you’ll need to use this TV in as dark a room as possible to get the best from it.


Turning to the 65DS8DDJ’s sound, I’m pleased to say it makes full use of the extra bulk at its disposal to produce a truly gargantuan soundstage that actually manages to match the 65in pictures for scale. And you can’t really ask for more than that!


Although its pictures aren’t quite as perfect as we’d hoped, they’re still good. And more to the point, they’re also absolutely massive – far bigger than you probably ever thought you’d be able to get for two grand. So while the 65DS8DDJ might not be one of your size zero supermodels, if you’re more interested in the sheer scale of image necessary to do home cinema properly than you are in merely saving living room space, then JVC’s HD-65DS8DDJ simply demands an audition.