Although JVC is sometimes overshadowed by the big three camcorder manufacturers – Canon, Panasonic and Sony – it still regularly leads the market for innovation. First with the upright palmcorder format, and first to use a hard disk in a consumer camcorder, JVC is bold enough to break the new trends, even if it doesn’t always get to capitalise on their success.


The Everio GZ-X900 is another courageous move, although in many ways it is classic JVC. Despite having a very compact format, it packs in a much higher-end specification than you would expect. Thanks to its use of SDHC memory for recording, the X900 weighs under 300g. But inside is a massive 1/2.33in CMOS sensor with a gross resolution of 10.3-megapixels. Putting this in perspective, Canon’s ultra high-end LEGRIA HF S10 sports a slightly smaller 1/2.6in CMOS sensor. A larger sensor generally means better image quality, particularly in low light, so this gets the X900 off to a very good start. 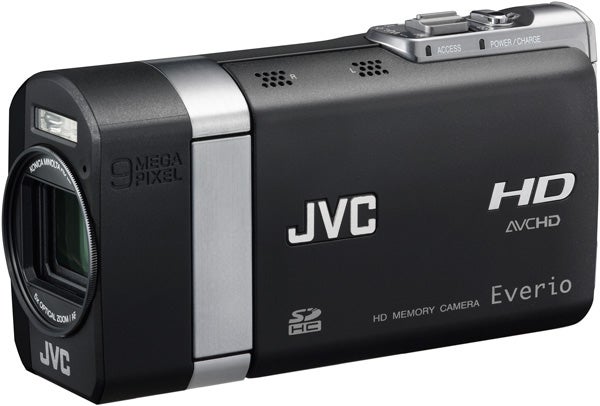 The high resolution also allows the X900 to shoot still images with a true 9-megapixel resolution. This beats both the Canon LEGRIA HF S10 and Panasonic HDC-HS300, which shoot at around 8-megapixels. JVC has focused a fair amount of attention on this area, making the X900 a very adept crossover device. 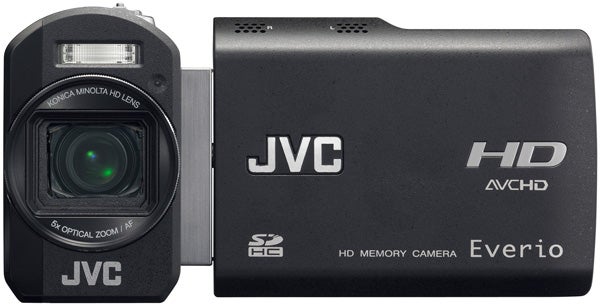 Although you only get the full 9-megapixel option in dedicated photography mode, there are continuous shooting options for 15, seven and two frames per second, although the first two of these are limited to just six shots at a time. In video mode, digital stills are limited to 5.3-megapixels, but this is still respectable where quite a few HD camcorders are confined to video resolution when shooting simultaneously with movies. 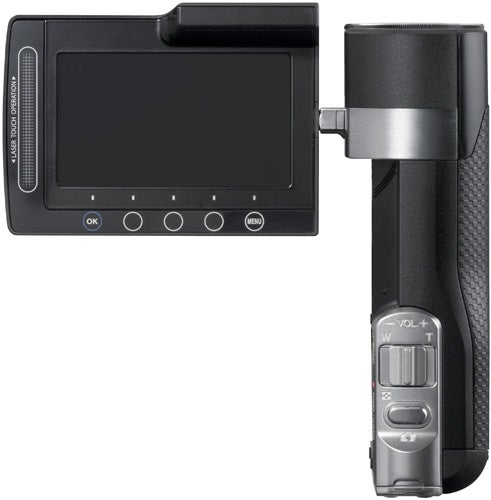 However, packing such a large CMOS sensor into such a small physical package does have one downside. The lens space is only sufficient to provide a 5x optical zoom, which is pretty paltry when most HD camcorders offer at least 10x. JVC has alleviated matters slightly by providing Dynamic Zoom, which boosts the factor to 8x. This works in the same way as the Canon LEGRIA HF S10’s digital telephoto.


Since 5.3-megapixels are used to capture the video image, and only 2.07-megapixels are actually required, even for Full HD, this is digital zoom but without the loss of resolution. In our experience, however, these technologies do sacrifice some low-light sensitivity, hence the option to turn off Dynamic Zoom if you want. In bright conditions, though, it’s very effective.

The X900 sports an unusual new optical image stabilisation system, too. Instead of using sensor or lens shift to compensate for shaky camera work, the X900 employs an active prism. JVC claims this is equally effective throughout the zoom range, where lens shift systems tend to be less capable when using telephoto. Our review sample was an early unit where this hadn’t been perfected, so we will have to reserve judgement, but initial impressions were good.


Naturally, video is shot in Full HD (1,920 x 1,080), with AVCHD compression. Data rates range from 24Mbits/sec down to 5Mbits/sec, but there is no progressive shooting option. An 8GB SDHC card will be enough for 40 minutes of footage at the top quality mode. 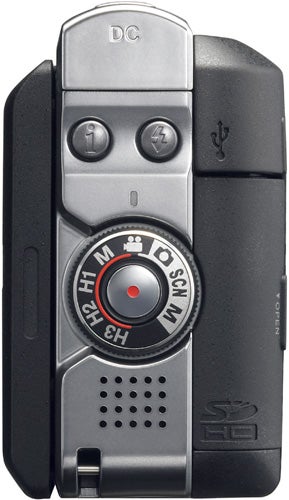 The X900 also offers some extra fun options. Following the trend adopted in particular by Sanyo’s Xacti VP-HD2000, there are three slo-mo settings. These are readily available via the mode dial on the rear. The options include 100, 250 and 500 frames per second, but the resolutions drop accordingly to keep the data rate manageable, ranging from 480 x 270 down to just 640 x 72, which looks extremely jaggy. You can only shoot for a few seconds in each mode, too, ranging from 4.7secs at 100 frames per second to a mere 2.8secs at 500 frames per second. So the slo-mo can be a lot of fun, but you won’t be using it for any serious motion analysis. 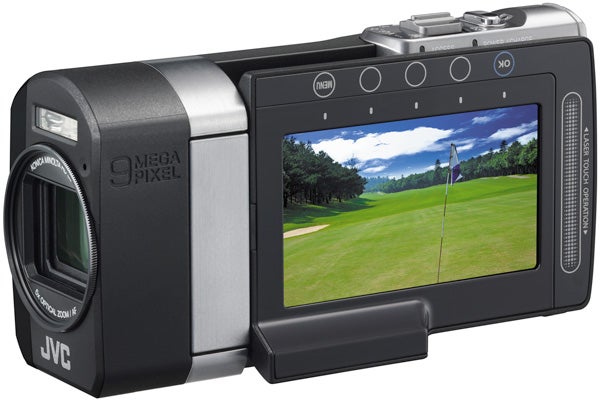 The mode dial is also used to switch to manual video and photo modes, plus enable scene settings. JVC has really gone to town on the latter, offering no fewer than 15 options, although some are rather esoteric, such as Food and Sleeping Face. Curiously, the scene modes are also only available when shooting photos, not video.


The remaining functions are exclusively accessed via JVC’s Laser Touch Operation, which regular readers will know we have mixed feelings about. It’s very cool and funky, but not always the most accurate way of choosing menu options. JVC has packed in a comprehensive range of manual settings, including an overall brightness control, shutter and aperture priority modes, and even a focus assist system, which brings out edge detail to facilitate adjustment. But none of these are exactly easy to use with the Laser Touch Operation. 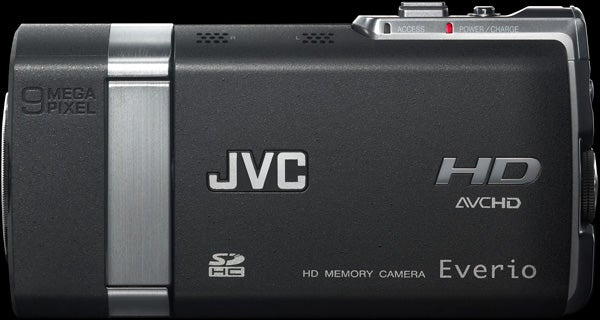 Still, the X900 is not intended for the enthusiast or semi-professional market, and it lacks other key features for this type of user. There are no minijacks for headphone or an external microphone, and no accessory shoe of any type for attaching video lights or audio gear. The battery is also enclosed by the camcorder body. So although you could still quite easily swap in a replacement, there are no larger-capacity options, and the supplied unit only lasts slightly more than an hour.

Since the X900 sports one of the largest CMOS sensors in any consumer camcorder yet (only Samsung’s VP-HMX20 goes larger), we were expecting class-leading image quality. We weren’t disappointed. The X900 shoots great-looking video with tons of detail and surprisingly for a consumer camcorder the colour is fairly natural too, without the oversaturation usually applied to wow you with vibrant hues. You really don’t expect this level of image quality from such a small camcorder. 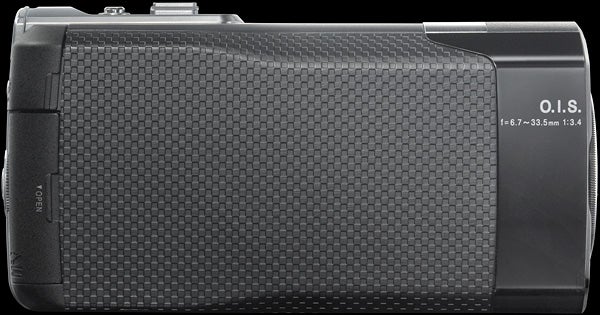 However, one area where we had expected slightly superior performance was when shooting in the most taxing low light. In theory, the X900 should compete very well with Canon’s flagship LEGRIA HF S10 and Panasonic’s HDC-HS300. However, the JVC shoots a much darker image than the Canon, and is slightly darker than the Panasonic as well. On the plus side, it maintains some colour definition and is not beset by as much grain as the Canon. Still, given a little more light the JVC acquits itself well. So in most conditions you will be extremely happy with the results. 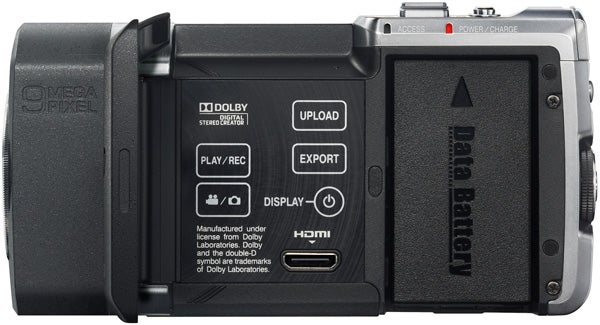 The same can be said for the still images the X900 shoots. Quality is certainly on par with a decent sub-compact or ultra-compact camera and shutter response is rapid so you won’t miss your shot. The 9-megapixel resolution will be more than enough for printing, with plenty of detail and the same excellent colour fidelity of the video. JVC has finally created a camcorder which crosses over into photography with sufficient ability to be worthwhile. 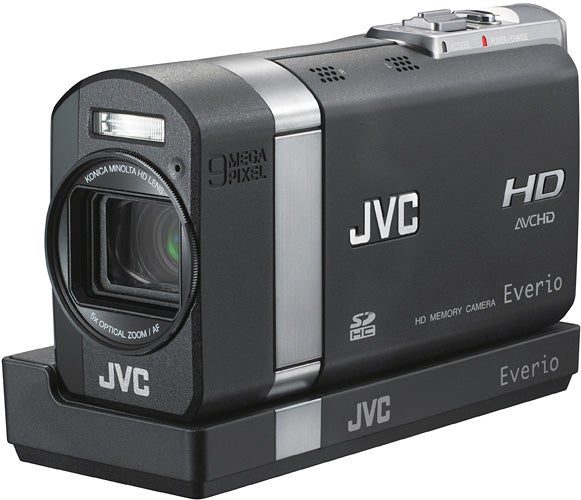 Being so small, the camcorder itself only incorporates USB for pulling footage off to a computer or other external peripheral, and mini HDMI (although no adapter is supplied in the box). However, a docking station is also supplied, which adds component and composite analogue output, as well as a second USB and power. So you won’t need to fiddle with cables if you always hook the X900 up to the same devices.


As with pretty much every camcorder released so far in 2009, our pronouncement on the Everio GZ-X900 falls back to price. If it had been pitched at £700 or less, this would be an absolutely storming buy. But at more like £900, the X900 costs more than last year’s Canons, and enters the same league as this year’s enthusiast models, such as Panasonic’s HDC-HS300. So whilst it really does manage to combine excellent video with credible photography in an inordinately tiny package, the X900 is for the rich gadget lover rather than the serious videomaker.