While other manufacturers have been hedging their bets with camcorders using every conceivable recording format, JVC has been resolutely sticking with the hard disk-based models it pioneered. Until now.


The new Everio S range, with the GZ-MS100 at its vanguard, has turned to flash memory to reduce size and weight. The GZ-MS100 is also jumping on the latest camcorder bandwagon, promising direct YouTube connectivity, allowing you to upload your videos straight to the Web at the push of a single button. 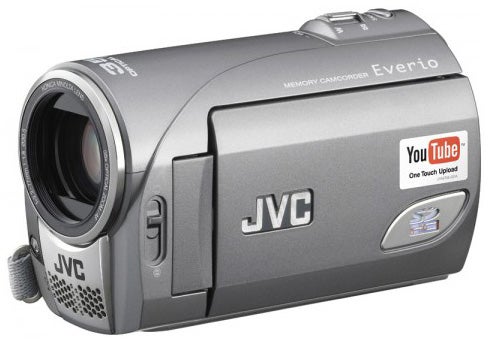 The basic specification is fairly standard for a camcorder in this price range. The sensor is the usual 1/6in CCD, in this case with 800,000 pixels. In fact, features are virtually identical to JVC’s Everio GZ-MG330. The main difference is the recording medium, with the MS100 using SDHC rather than the MG330’s hard disk. As a result, the MS100 is quite a bit lighter, 270g versus 360g, but not much smaller. 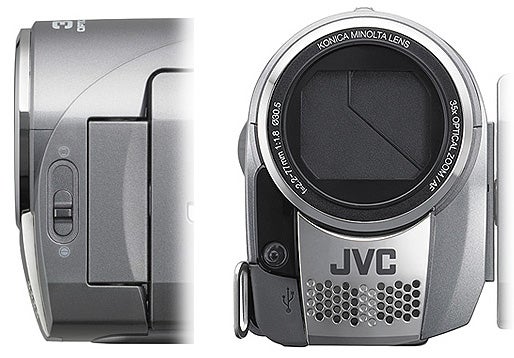 The MS100 has the same whopping 35x optical zoom. You can also select 70x and a ridiculous 800x digital zoom – but you will be a gifted psychic to make out any detail at this level of digital magnification. It has the same F1.8 Konica Minolta lens as the MG330, an identical manually operated protective lens shutter, and electronic image stabilisation. 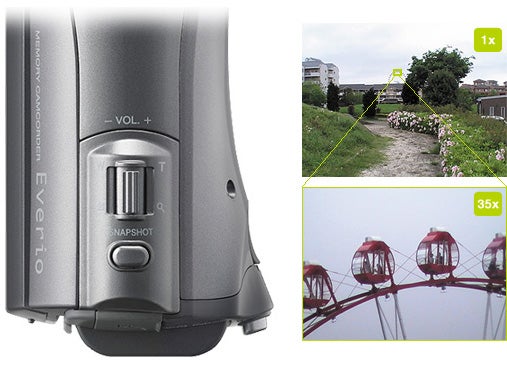 Four shooting modes are available, all of which use MPEG-2 compression. The top Ultra Fine mode has an 8.5Mbits/sec data rate, whilst Fine operates at 5.5Mbits/sec, Normal at 4.2Mbits/sec, and Economy 1.5Mbits/sec. The first three record at the regular PAL resolution of 720 x 576, but Economy mode drops down to 352 x 288. Whilst this could come in handy for day-long surveillance, an 8GB card will be enough for about two hours of footage even at the top quality setting, so you’re most likely to use that all the time. No memory card is included, however, so this will need to be factored into the price.

Despite its YouTube orientation, the MS100 still has a few manual features worth considering, although they are rather buried. Settings are configured using JVC’s new Laser Touch Operation, which we first came across in the Everio GZ-MG330. This involves stroking your finger along a strip to move up and down menus. But there is no quick way to get to the manual settings. Once you have switched from auto to manual, you need to go through the full menu to get to manual configuration. 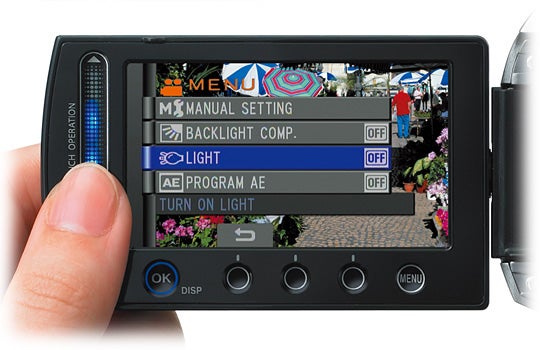 Manual options include a Brightness control, which varies exposure, but only in steps from -6 to +6, with no direct relation between these values and iris or video gain. You can configure the shutter separately from ½ to 1/4000th of a second. There is also manual focusing, which is a little fiddly to use with the Laser Touch, and even the ability to switch whole screen or spot exposure metering, although this is rather confusingly referred to as ‘Photometry’. After all, why use plain English when an obscure technical term is available instead. 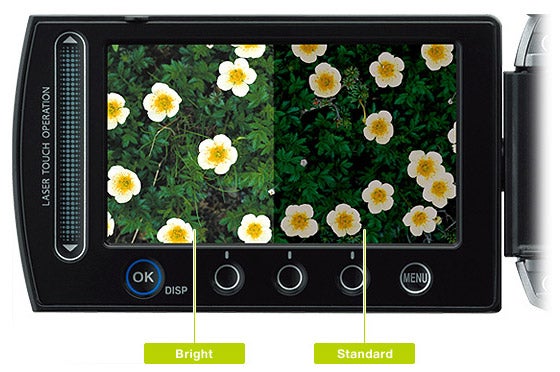 The Register Event system is available to tag your videos with a label such as Holiday, Sports or Anniversary, to aid future searching. Plus there’s the MS100’s most distinctive feature: the discrete button for Upload mode, which limits recordings to 10 minutes each, automatically splitting longer clips into 10-minute segments as you shoot. When the camcorder is connected to a PC, it also enables the much-vaunted One Touch YouTube upload – but more of this in a bit. 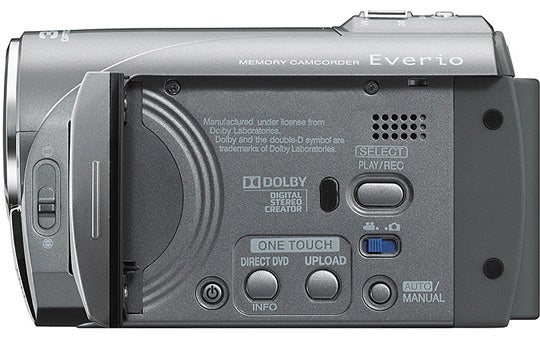 Like the MG330, the MS100 doesn’t have an accessory shoe, microphone minijack or headphone socket. Apart from the USB port hidden under the lens at the front and the DC input, there is only a minijack for A/V, with a cable supplied offering composite video and stereo RCA audio. But it does have a built-in LED video light, which can be set to turn on automatically when low light conditions are detected. This is one feature not present on the MG330, for some reason. We would have preferred a discrete button for this, however, as hunting through the menu to turn it on is a right old rigmarole.

The GZ-MS100 produces a very bright, colourful image in the best lighting. Colour fidelity and detail are still pretty decent in good artificial lighting, too, so long as the auto gain control (AGC) is turned on. Like the MG330, colour is retained to fairly low levels, without a huge amount of grain, and the brightness can be boosted by using the manual shutter settings to drop down to 1/25th. A yellow cast becomes increasingly apparent as the level of light drops, but overall the MS100 is reasonably capable in poor illumination, like the MG330 – no surprise, since the recording medium is the only major difference.

So the Everio does well for a camcorder built around a 1/6in CCD, and is a league above other camcorders aimed specifically at YouTube. However, where Creative’s Vado and Pure Digital’s Flip Video Ultra have their YouTube software built in, JVC still requires you to install its application from a CD. This comes in the form of CyberLink PowerCinema NE, an Everio-specific version of the Windows Media Center Edition lookalike.

PowerCinema NE provides a remote-friendly interface for browsing the videos and digital stills on your Everio camcorder, and the ability to back these up to your PC hard disk. The headline feature is of course the One Touch Upload to YouTube. However, for this to work you need to be shooting video in Upload mode to begin with. If you don’t do this, the footage you have shot won’t appear in the PowerCinema NE list. 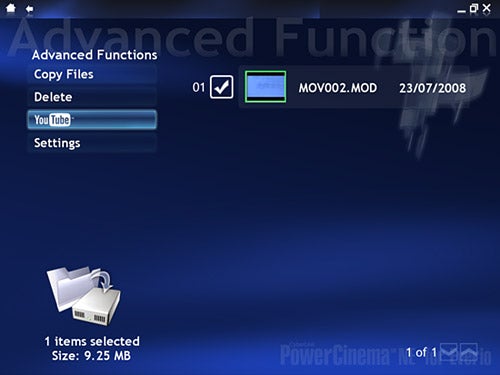 When you plug the camcorder in via USB, four options appear on its LCD. But a single press of the Upload button calls up PowerCinema NE on the host PC and takes you straight to the YouTube Upload page, showing any videos on your camcorder shot in Upload mode. You can then select the video you want to upload, read a few terms and conditions, and enter your YouTube details and categorisation. The video will then be uploaded for you. However, once the camcorder is connected to the PC, further presses of the One Touch Upload button do nothing, and videos which haven’t been shot in Upload mode can’t be sent to YouTube anywhere near as easily. 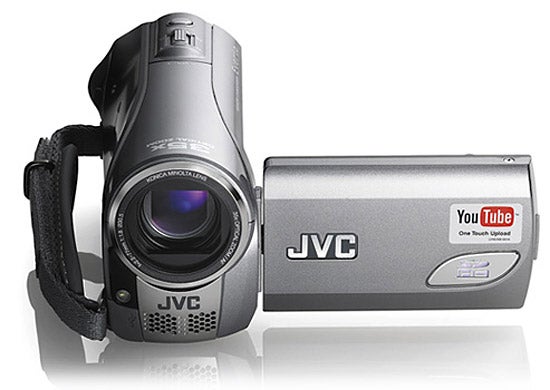 
Compared to the built-in software of the Vado and Flip Video Ultra, the JVC Everio GZ-MS100’s YouTube connectivity is much more of a gimmick. Most regular camcorders could provide almost the same functionality with a copy of Roxio Buzz. But that doesn’t stop it being a decent little camcorder for the money. Its video quality beats other YouTube oriented models hands down, and even gives other similarly-priced models a run for their money. But JVC’s own Everio GZ-MG330 is almost the same price, offers identical image quality, yet comes with a 30GB hard disk on board. So unless you need the lightness of the SD memory format and One Touch YouTube abilities, the heavier MG330 is better value.