The JVC Everio GZ-MG730 is a bit of an oddity. It sports a huge 1/2.5in sensor – as large or larger than any consumer high definition camcorder. Yet this is a standard definition model, shooting MPEG-2 at a resolution of 720 x 576. The CCD has 7.38-megapixels, too, which would easily be enough for an HD video signal. But the resolution is primarily focused on still photography. The MG730 can take photos up to 3,072 x 2,304, which is on par with standalone digital cameras. So where many camcorders dabble in photography, and cameras in video, the Everio GZ-MG730 promises to straddle both worlds with competence in both areas.


The focus is still primarily on the camcorder side of things, however, with a standard camcorder form factor incorporating a fold-out LCD panel. Video and photos are recorded onto a 30GB hard disk, with four formats available ranging from 1.5 to 8.5Mbits/sec. Even at the top data rate, there’s room for over 7 hours of footage and over 9,000 photos at even the maximum resolution. Nevertheless, a microSD slot is also provided, which can be used to record video or photos too. 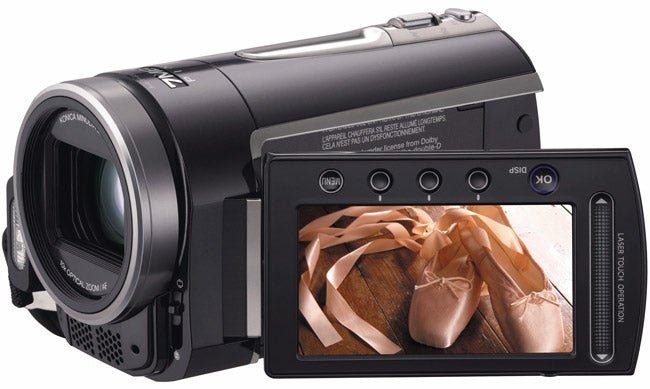 The dual-purpose orientation shows itself in the manual settings available, which vary with mode, although many are common between the two. The MG730 relies on JVC’s flashy Laser Touch Operation for menu access and altering configurations. This is certainly an eye-catching system, but a little inaccurate. So using it for focusing manually is tricky. Fortunately, the various Program AE settings are included on the mode wheel. Aside from full auto and manual modes, aperture and shutter priority options are available, plus six scene presets. These include Night, Twilight, Portrait, Sports, Snow, and Spotlight.


In manual mode, you can alter the Brightness from +6 to -6, set focus, and select Fine, Cloud, Halogen, or fully manual white balance configurations. Shutter priority mode lets you choose speeds between ½ and 1/4000th sec, and aperture priority mode iris from F3.5 to F16. However, whilst the Brightness setting is still available in the priority modes, it doesn’t appear to do anything. So unlike many Canon camcorders, you don’t get quasi-independent control over shutter and iris, or completely independent control as with most Panasonic models.


Changing to still image mode via the switch just above the battery reveals a few alternative setting options. In particular, aside from taking individual pictures, you can choose continuous shooting or even exposure bracketing, where multiple shots are taken in succession with different exposure settings. These can then be stitched together to make a photo with wide dynamic contrast. The gain settings become ISO modes, offering 50, 100, 200, 400 and 1000 options. All the scene modes and priority modes are still available, and you’re more likely to use these when taking photos.


The MG730 has a few other settings which are common to both video and photo modes. You can choose between vivid and natural colour, which alters the saturation. Annoyingly, backlight compensation is a menu option, too. Considering how likely you are to find yourself shooting people against a bright background, having backlight compensation as a separate button is always handy. However, the MG730 is not really for the videomaking enthusiast. It lacks those essential features for more professional production, a microphone minijack input and accessory shoe. Not surprisingly, there’s no headphone minijack either.

The MG730’s huge CCD promises good image quality in most conditions. In the best lighting, video is very colourful and faithful, although obviously lacking in detail next to HD. In less favourable conditions, however, the large sensor doesn’t make itself felt as much as you might expect. In a well-lit room, colours remain more vibrant than any low-end single-CCD camcorder. But as the light drops, a yellow cast discolours the footage, the autofocus becomes very sluggish indeed, and grain seethes over lighter areas.


Comparing the MG730’s low-light performance with JVC’s new CMOS-based HD models such as the GZ-HD40, which has a smaller sensor, it’s no contest. Where the HD40 still shoots usable footage in your average poorly lit domestic room, the MG730 doesn’t. Its video is significantly better than most other single-chip standard definition models, but the benchmark of quality has moved on a fair amount in the last couple of years. 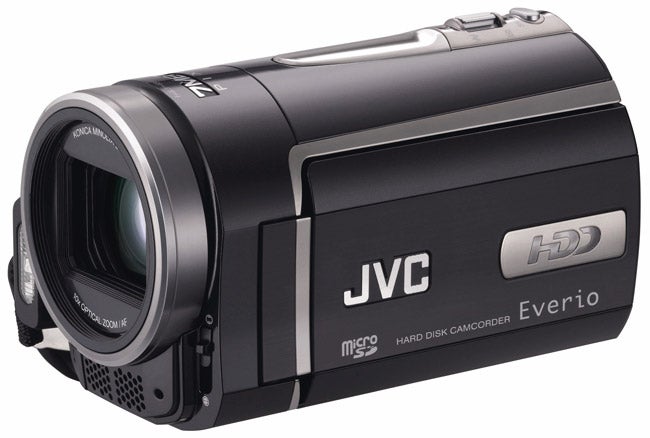 We normally don’t spend a lot of time testing the built-in photography abilities of camcorders, as they are almost always a pale shadow of what even cheap standalone digital cameras can achieve. But since the MG730 at least offers a camera-like resolution, and a raft of photographic features, we engaged in a bit more digital photography than usual.


In daylight, photos look good, with faithful colours, although not always as sharp as we’d hope in automatic mode. Setting a higher shutter using the priority mode seemed a necessity to get the best results. Under artificial light, the built-in flash did a good job. Although its range is not enormous, it’s perfectly adequate for grabbing the odd family snap. Overall, the MG730’s photography is significantly better than most camcorders, and close enough to a pocket digital camera to be a worthwhile alternative. In fact, in some ways the MG730 is a better camera than camcorder.


As with previous standard definition Everios, the MG730 records MPEG-2-based MOD files, which are now almost universally supported by editing software. There’s a USB port on the front for computer connectivity, but the only other built-in port is an AV minijack offering composite and RCA audio. Expanding the options is the bundled docking station, which sports an extra USB jack, another AV jack, as well as S-video and FireWire.


The JVC Everio GZ-MG730 is an unusual camcorder. Its photography abilities are well beyond what most other models offer. In today’s market, however, a camcorder costing over £400 that doesn’t shoot HD makes little sense. Canon’s HF100 can be had for £125 more and JVC’s own GZ-HD30 for £240 more. Even though neither does such a good job with photos, if your primary aim is videomaking with photography on the side, you would still be better of paying that little bit extra for a high definition model.