JVC led the way with hard disk-based camcorders when it launched its Everio range back in 2004. But the format has taken a while to catch the public eye, and now Sony has entered the fray with its DCR-SR90 and SR100. So JVC needed to up the ante, and its answer is the GZ-MG505EK. Whereas the miniscule MC range had the three-chip MC500EK at its pinnacle, now the larger MG series has the MG505EK. It has almost identical optics to its tiny cousin, but in the larger G chassis.

Although the MG505EK loses some of the pocket-friendly gadget appeal of the MC500EK, its bigger body solves one of its most significant issues too. Instead of hosting a 4GB Hitachi Microdrive for video storage, the MG50EK uses a 30GB 1.8in model instead, like its MZ-MG50EK predecessor. So rather than maxing out at one hour of video at the top Ultra Fine quality settings, the MG50EK can fit seven hours on its drive, which should be enough for most family holidays. If you’re willing to drop the quality down, you could fit even more, although the VideoCD-quality Economy mode is probably best avoided.


Like the MC500EK, the MG50EK is based on a trio of 1/4.5in CCDs, each with 1.3-megapixels of resolution. You don’t need that many pixels to shoot video, but JVC gangs them together and adds a bit of interpolation using its Megabrid Engine to make 5-megapixel stills. With a maximum still image size of 2,560 x 1,920, there’s not much to separate the JVC from a low-end standalone digital camera in terms of raw pixels. Unlike other members of the MG range, the MG505EK offers a wider range of manual features in its menu for photography as well, including aperture and shutter priority modes, plus ISO settings of 100, 200, 400 and auto. So this is a much more viable stand-in for a standalone camera if you want to vary settings as well.

It also has better features for the more serious video maker. There’s an accessory shoe, with a mic minijack round the front. And of course, with no tapes to change this camcorder will sit comfortably on a tripod. However, the AV minijack at the back doesn’t support headphones for monitoring your sound levels, and there is no manual audio level control either. Also, what looks like it should be a handy lens ring for manual focusing is just for show, as you still need to resort to menu buttons to focus. The MC500EK had a real focus ring, and it’s a mystery why the MG50EK doesn’t. 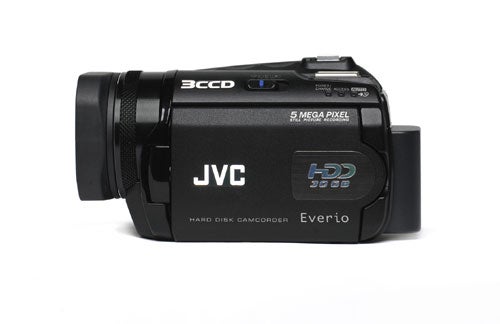 There’s a decent amount of manual control to be found in the menu system, though. There are actually two separate menus – one for global camera settings, and one specifically for image control. The latter is readily accessed by pushing down the joystick on the 2.7in widescreen LCD. Five Auto-Exposure modes are available, including Portrait, Twilight, Spotlight, Snow and Sport. You can also choose aperture priority mode from F1.8 to F8, with the shutter adjusted automatically, or shutter priority from ½ to 1/4000th of a second, with the aperture adjusted automatically. There are three white balancing presets – halogen, cloud and fine – plus the usual manual and automatic modes. Then of course there are some whacky digital effects, which are best left to the editing stage.


So although the MG50EK doesn’t have everything the semi-pro might want, it does go well beyond point-and-shoot. And for the past couple of years, editing the footage isn’t the strain it once was, with JVC’s Everios. Most desktop video applications now support the MOD file format the Everio records, including its Dolby Digital audio, so cutting your footage won’t pose any more trouble than editing DV.

With a trio of chips, one for each colour signal, the JVC promises exceptional colour fidelity. These are also reasonably sized CCDs – not the 1/6in ones used in the cheaper Panasonic models. As expected, in good outdoor illumination, we found the image very commendable, although not the absolute best we’ve seen. The image was very sharp, and in this respect better than the MC500EK, which has identically specified CCDs. Colours were vivacious, too, but a tad over-saturated compared to premium three-CCD camcorders such as Panasonic’s VDR-D300. 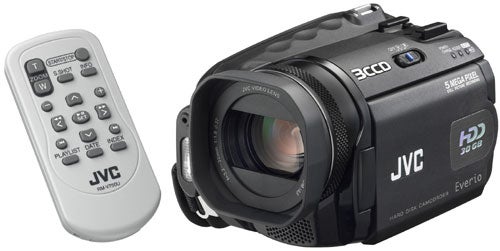 In lower light, the MG50EK was even more impressive. Under reasonable indoor illumination, the image maintained its vibrant colours, with little obvious noise. This continued in conditions where just one tungsten bulb was used. Only when we tried the equivalent of candlelight did the image become dark and grainy. You can use the shutter speed control to improve things – but then of course the image becomes blurry. This is in a completely different league to single-chip Everios, which tend to wash out in all but the best-lit interior conditions. It’s also worth noting that this JVC model comes with Automatic Gain Control (AGC) turned on by default. Leaving it that way is a necessity unless you want totally black images in low light.


The JVC has another trick up its sleeve, too. Whereas the photographic ability built into most camcorders is generally uninspiring, the MG50EK’s was outstanding. The colour and brightness even bettered the MC500EK, which is one of the best camcorders around for still images. With the manual features and built-in flash, the MG505EK is at last a hybrid which isn’t just a gimmick – you really can leave your pocket camera at home.


Taken on its own strengths, the JVC GZ-MG50E is a formidable package. Image quality is good, there is sufficient storage space for the lack of removable media not to be a problem at all, and the features are more than adequate if you don’t have semi-professional intentions. It’s the best hard disk camcorder we’ve seen so far. The main chink in the MG505E’s armour is that it shoots in standard definition, and high definition is rapidly gaining pace. Canon has recently launched a consumer model, and Sony’s HDR-HC3E is only slightly more expensive than this JVC contender. Sony also has a hard disk-based HD camcorder due in a few months. So although the JVC is an undeniably desirable cam, there are alternative objects of techno-lust just around the corner.