The problem with the increasing emphasis on 3D shooting in the latest camcorders is that there are two ends to this equation, as there was with HD. You don’t just need a camcorder that can shoot in the new format, but a TV capable of playing it back as well, or a computer with the necessary power, screen resolution and (in the case of 3D) some additional eyewear. So we’re in a transitional phase between 2D and 3D, and with with the Everio GZ-HM960BEK, JVC hopes to provide a camcorder to guide you between the two.


The most surprising thing about the GZ-HM960BEK is that it actually doesn’t shoot 3D at all. This is a pure 2D high definition camcorder, at least in terms of the video format recorded. Instead, JVC has integrated 2D/3D conversion technology and a display, which can play back 3D that you can watch without any special glasses. This sounds like a rather silly idea – the kind of thing a wannabe manufacturer would do to jump on the 3D bandwagon without having to face the difficult task of shooting credible 3D footage. 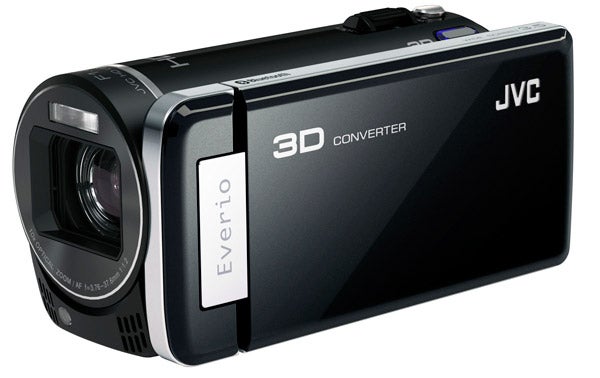 But this isn’t the case with JVC. The company has been well-known for a few years now for producing one of the most effective real-time 2D/3D conversion systems on the market. This was originally intended for rich home cinema enthusiasts to enjoy their existing Blu-ray collection with an added dimension, but was so good that movie distributors started using it to convert commercial titles to 3D so they could be redistributed in this format. In other words, the GZ-HM960BEK comes from a good pedigree, and due to the way humans actually perceive depth (it’s not just because we have two eyes), can potentially do a passable job of rendering 2D video as 3D.


The built-in LCD uses parallax barrier technology to provide its glasses-free 3D experience. This is an optical effect that sends a different picture depending on the angle from which it is viewed. A similar, but more extreme version is used by Land Rover to provide a display that shows sat-nav information to the driver whilst the passenger watches a movie. You can turn off JVC’s conversion system with a big, blue-glowing button on the top of the camera. The LCD then reverts to a regular 2D TFT. It’s also possible to output 3D over the HDMI connection to a supporting TV, using the usual formats including side-by-side transmission.


Other than this, the GZ-HM960BEK is a regular, high-end HD camcorder. It’s built around a massive 1/2.3in CMOS sensor with a whopping 10.62Mpixels. If the size and resolution weren’t enough, this is also a back-illuminated CMOS. So the sensor array wiring is behind the individual pixels instead of in front (the traditional arrangement), allowing more light through. This means colour and brightness should be maintained even when conditions are quite dark.


The extra pixels are also called into play to improve the power of the zoom. Unassisted, the optical zoom provides a relatively modest 10x magnification. But by cropping into the CMOS sensor this is boosted to 15x in Dynamic mode, without a loss in detail, although the smaller surface area used does have some negative implications for low light performance. Image stabilisation also appears to be taking some advantage of the sensor’s resolution, as enabling the enhanced version of this reduces the Dynamic zoom to 13x.

Video is recorded in AVCHD format with four quality options ranging up to 24Mbits/sec available, which is the maximum possible for this type of video. There’s 16GB of flash memory on board, which will be enough for a little under 90 minutes of footage at the top quality setting. If you need more storage, an SD card slot is included, which supports the SDXC format, so capacities up to 64GB can be used.


The GZ-HM960BEK is not aimed at videomaking enthusiasts, but it does have a reasonable selection of manual settings available for those who want a few more creative options. Manual focusing is on hand, although it’s a little hard to be precise using the controls offered by the touchscreen LCD. There’s a focus-assist option to help here, which temporarily switches the display to monochrome and puts coloured fringes around objects that are in focus. We reckon most people will opt for the touch focusing instead, which can use face detection, colour tracking, or a fixed area within the frame as a reference, indicated by a finger press. It also sets exposure using this reference point. 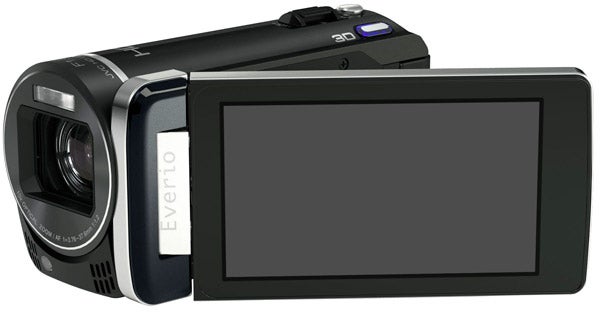 If you do want to control exposure manually, there are plenty of options here. There are shutter and aperture priority modes, and unlike some JVC camcorders you can configure these two settings independently, with the shutter variable from ½ to 1/4000th sec, and iris from F1.1 to F5.6. There’s a more general brightness control, too, although you can only use this in tandem with either shutter or iris, not both at the same time.


JVC’s S menu is also on hand, offering some advanced features. These include smile shot, which triggers a photo when a smile is detected, animated effects you can superimpose over the frame, and Face Sub-Window. The latter creates a picture-in-picture of a detected human face, although we found it a little temperamental.


What you don’t get is any of the physical features an enthusiast videomaker would need. There’s no accessory shoe, no microphone input or headphone output, and no lens ring for precise control of focus or zoom, although to be fair the latter is extremely rare in consumer-grade camcorders.


You expect a camcorder costing £850 to offer top-end video quality, and the GZ-HM960BEK certainly delivers in this respect. In adequate daylight conditions, colours are vibrant and faithful, and detail is clear. Extremes of contrast are also handled very well. Low light abilities are particularly impressive, with just a slight shift in white balance indicating a poor level of artificial illumination. There’s an advantage of the 2D/3D conversion system in low light, too: Camcorders that record side-by-side frames within the same CMOS sensor area have drastically inferior image quality in low light, and indeed lose considerable resolution in all conditions. But this camcorder doesn’t, as the base video remains standard Full HD.


The Everio GZ-HM960BEK is a decidedly strange camcorder, although we’ve come to expect this kind of left-field approach from JVC. Its image quality is excellent, and it has a decent array of manual settings. The 2D/3D conversion also works better than you would expect. However, the inclusion of this technology and the glasses-free 3D display have pushed the price of this camcorder to equal or more than the top-end 2D-only models from JVC’s main competitors. Since it doesn’t have enough enthusiast features to match some of these models, such as Panasonic’s HDC-TM700 and just-released HDC-TM900, or even JVC’s own Everio GZ-HM1, you trade off these for the quasi 3D. So its appeal is somewhat more narrow.