You know, this might just be one of the easiest reviews I’ve ever had to do. Why? Because JVC’s DLA-HD750 is designed to be even better than the already extraordinarily good HD350 we tested a few weeks ago. So if it lives up to its billing, really the only area that might require any sort of debate is whether it really justifies its £5,295 cost – a hike of more than £2,000 over the HD350.


Regular readers will be familiar by now with the groundbreaking Wire Grid optical technology that helps JVC achieve class-leading black levels from its proprietary D-ILA projection system, so I won’t go into it again here. (If you’re not a regular reader, I refer you to earlier reviews of the DLA-HD1, DLA-HD100 and HD350).


Instead, the best place to start would seem to be by looking at how the HD750 supposedly improves on the HD350. 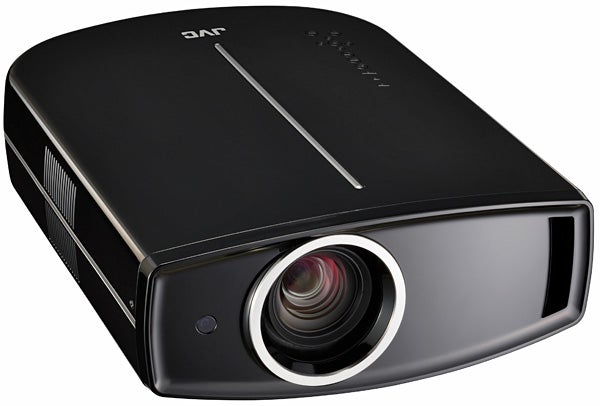 The single most significant development is that the HD750’s claimed contrast ratio is 50,000:1 versus the HD350’s 30,000:1 – a potentially awe-inspiring difference considering that the HD350’s black level performance was more or less immaculate.


Don’t forget, after all, that the contrast ratio numbers described by JVC are, unusually, native figures, meaning that they’re not dependent on the dynamic contrast systems employed by lesser projectors to produce a convincing black level. In other words, the JVC projectors can deliver their deepest blacks without having to reduce the output of their lamps and thus limit the brightness of any light elements a predominantly dark scene might contain.

Another potentially huge enhancement offered by the HD750 is a genuine colour management system. This allows you to tweak the hue, saturation, and brightness of the six main colour components of the image, and provides three memory slots for storing preferred colour arrangements for a variety of source types or, more likely, room light conditions.


While this is a decent enough system – and one that’s long overdue on JVC projectors – it’s perhaps still not quite as sophisticated as I would ideally have liked. It’s certainly not in the same ballpark as the astonishingly flexible and accurate system supported by SIM2’s C3X 1080, for instance – though that projector now costs £23,000! But more tellingly, I also felt like I had marginally more control over colour with both Panasonic’s PT-AE3000 and Sony’s recent VW80 – thanks in part to their more sophisticated user interfaces.

Getting back to the HD350/HD750 differences, the HD750 has been certified for its performance by George Lucas’ THX ‘quality control’ organisation (making it the first THX-certified projector we’ve seen). This THX approval is a function, we suspect, of its new colour management tools.


The HD750’s connectivity outguns the HD350 too, adding a 12V trigger output and a D-Sub PC input to proceedings. The addition of a dedicated analogue PC port is particularly appreciated.


Another difference appeared during setup, as the HD750 provided a rather excellent 16 steps of manual lens aperture adjustment for fine-tuning brightness levels versus just three on the HD350. And finally (unless I’ve missed anything!), the HD750’s claimed maximum brightness of 900 Lumens is actually slightly less than that of the HD350. Though this needn’t be a bad thing, actually, as brightness can be an enemy of good black levels if it’s not well controlled.


In other ways, the HD750 matches the HD350 point for point. It looks equally lovely in its glossy black finish, for instance – though if I had to be picky I might say that its extreme depth makes it look a little over-long and clumsy versus Sony’s latest SXRD projectors. 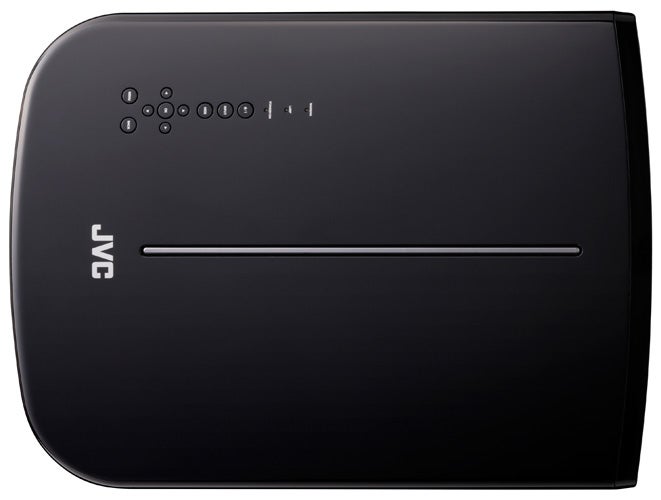 The HD750 also sports an impressively flexible x2 optical zoom, plus oodles of vertical and horizontal image shifting, all motorised and controlled with reasonable finesse from the remote control.


Also familiar are some of the key adjustments available in the onscreen menus, such as a Kelvins-based colour adjustment, a number of thematic picture presets (of which we generally preferred Cinema2), Gamma presets, noise reduction, and colour transient improvement.


I couldn’t help but feel a bit disappointed about the remote control used to access all these features; it’s extremely plasticky and unluxurious for such a premium product. But hey – at least it’s got a backlight for the buttons!


As I start to watch the HD750, it’s worth reflecting that my biggest concern was simply if it could improve enough on the HD350’s performance to justify its extra cost. And the answer is that yes, it just about can – but only if you fully intend to get stuck into the colour management system.


In other words, while the HD750’s performance ‘out of the box’ was superior to that of the HD350, it only became truly significantly superior once I’d spent some quality time fiddling around with the projector’s colours to compensate for the luminance characteristics of my screen and testing room.


Once this calibration was complete, the extra subtlety, expression and especially tonal naturalism of the HD750’s colours really became apparent, proving why JVC really should have introduced decent colour management on its projectors before.

The HD750’s black levels are also, remarkably, even more profound than those of the HD350. Indeed, if you’re not careful with your settings you can actually make them look slightly too dark, to the point where the shadow details that give dark scenes depth start to disappear. But the HD750 should not be blamed, of course, for calibration cock-ups! Get the settings right and the reality is that the HD750’s black levels are arguably the deepest, most natural and most inherently stable I’ve ever seen.


This fact also helps the HD750’s pictures look slightly richer and more solid than those of the HD350, making the worlds of the films you watch feel that bit more tangible and engrossing. 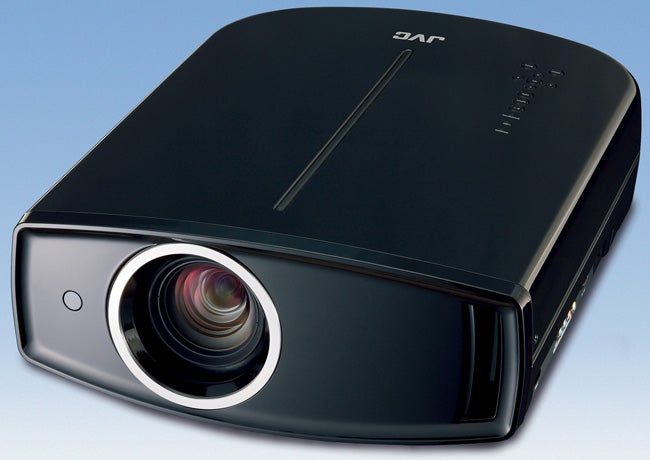 All this and we haven’t even touched on another key strength of D-ILA technology carried over by the HD750: sharpness. D-ILA chips cram their 1,920 x 1,080 pixels into a phenomenally small area, allowing the picture to look both stunningly detailed and crisp, but also completely free of obvious pixel grid artefacts. Even better, the D-ILA system responds fast enough to reproduce motion without significant judder or blur, while pictures seem completely free of any technical artefacts like DLP’s rainbow effect and dotty skin tones.


Yet more good news concerns the HD750’s brightness. For while I’d never recommend that you do it, I found its pictures much more watchable in ambient light than those of the previous D-ILA Wire Grid models. Pictures looked more dynamic and vibrant on my 110in screen than previous models too, and standard definition pictures upscale to the projector’s 1080p resolution very nicely thanks to the projector’s onboard HQV Reon-VX video processing.


One final bit of good news, not connected to the projector’s stunning picture quality, is how quietly it runs. Even sat within a couple of feet of it, it failed to disturb me during even the quietest bits of my test material.


While the HD350 probably represents the best value model in JVC’s new range, if you take your home cinema seriously and have the necessary extra readies, the HD750 is the definitive D-ILA projector to date. And the best performer I’ve seen outside of the megabucks three-chip DLP world. 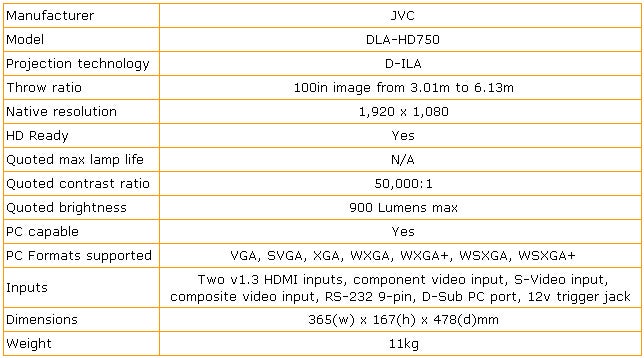