While JVC has established a name for itself at the very highest, professional end of the projection market, it has never really broken the domestic scene. One or two projectors using the company’s proprietary D-ILA technology have come our way over the years, but none have made convincing enough arguments with their home cinema performances or prices to really get our attention.


Which is just one of the many factors that makes JVC’s new DLA-HD1 so startling. For as well as being built from the ground up with home users in mind, at considerably under £4k it’s also priced pretty aggressively considering the sort of specification it offers.


This specification includes, excitingly, a full HD pixel count of 1,920 x 1,080. Actually this spec becomes less surprising – but no less welcome, of course! – when you take into account the fact that JVC’s D-ILA technology was originally developed as a premium spin-off of Liquid Crystal on Silicon (LCoS) technology to satisfy a requirement by military simulators for higher resolution displays.

Even more eye-catching than the full HD spec, though, is the HD1’s claimed contrast ratio of 15000:1. This is the highest such figure we’ve ever seen from a domestic projector, and amazingly it’s achieved without any ‘dynamic iris’ trickery, whereby the image’s brightness is reduced when dark scenes are detected to improve black level response. In other words, you should be able to get high contrast and high brightness simultaneously from the HD1: a fact that promises pictures of unprecedented AV dynamism and range.


Actually, the 15000:1 claimed contrast ratio becomes more remarkable the more we think about it. For while D-ILA has historically had some real image strengths – especially in terms of its definition and almost complete freedom from video noise of any type – its single greatest weakness has been its black level response. Dark scenes, even on D-ILA projectors costing double what the HD1 costs, have tended to look greyed over and flat. So we have to wonder just what JVC has done to suddenly make such an apparent black level leap with the HD1.


The answer lies in two remarkable innovations. First, JVC has come up with a radical alternative to the traditional glass prism-style polarising beam splitter used by reflective-type projection technologies. Such prism-based systems are actually rather inefficient when it comes to light retention, allowing light to spill out into the optical engine and so reduce the potential for black level response. So JVC has gone back to the drawing board and come up with the Wire Grid Optical Engine.

This is a flat plate carrying an inorganic reflective polarising surface along with aluminium strips positioned along the top that hugely reduce the angle dependency of the polarised light that hits the plate, resulting in far less contrast-ruining light being ‘spilt’ into the rest of the optical array.


The second innovation is a new ‘smoothing’ manufacturing process JVC has developed to reduce imperfections in the alignment of liquid crystals, further reducing the amount of light that seeps into the optical system rather than finding its way to its proper home: on your home cinema screen.


The HD1’s connections are conspicuously HD friendly, as you’d expect, and include two HDMIs and a component video port. There are also S-Video and composite video options for anyone silly enough to use them, plus, crucially, a nine-pin jack that allows the projector to fit into a full home automation system – just the job for the custom install market JVC is doubtless keen to court with the HD1.

There are a couple of jacks the HD1 lacks that we would have liked to have seen: a D-Sub PC port and a 12v trigger jack for driving a powered screen. But the lack of D-Sub is at least made bearable by the fact that the HDMIs can take PC feeds.


The HDMIs can also take every HD format we can think of, including the 1080p/24fps one commonly used to master movies onto HD discs. But JVC has also gone the extra mile to ensure that the HD1 isn’t only HD’s friend by equipping it with Gennum’s acclaimed GP9351 video processor, which should prove very handy when it comes to upscaling non-HD material to the HD1’s high pixel count.


If your brain is struggling to keep up with some of the rather technical stuff we’ve inevitably been going over so far, fear not: the HD1 is actually remarkably easy to set up and use for such a sophisticated unit. The on-screen menus are attractive and logically presented, and helpful features like an x2 optical zoom, horizontal/vertical image shift and keystone correction all make the HD1 pretty easy to adapt to a wide variety of room shapes and sizes.


In fact, arguably the HD1’s biggest obstacle to easy living room integration is its sheer size; it’s really quite a large unit, a fact which not even its reasonably glamorous black finish can disguise.


Once you’ve seen what the HD1 can do for you, though, we reckon you’ll be willing to do just about anything necessary to accommodate one in your home. For its picture quality is nothing short of stunning.

Heading up a frighteningly impressive list of talents is, as we’d hoped, the HD1’s black level response. The opening space battle of The Revenge of the Sith thus takes place against a backdrop of outer space that looks almost completely, convincingly black, with practically zero of the greyness that flattens the same scene out to some extent on practically every other projector at this price point.


It should be said, too, that the deep, utterly convincing black level on show during this scene isn’t forced in any way, by which we mean that it isn’t achieved at the expense of the subtle shadow details that give dark picture elements depth. Even the blackest parts of the picture look like natural parts of the picture as a whole rather than empty holes ripped out of it.


Once you’ve recovered from the shock of such cinematic black levels, you’ll then have to take in another startling talent: the HD1’s sharpness. For the HD1’s rendition of the high levels of clarity and detail in top HD sources like Casino Royale on Blu-ray is simply second to none. In fact, couple its full HD sharpness and purity (when watching a full HD source) with the remarkable depth the image gains from its black levels, and you’ve got a contender for the clearest picture ever seen on any projector other than vastly more expensive three-chip DLP affairs. 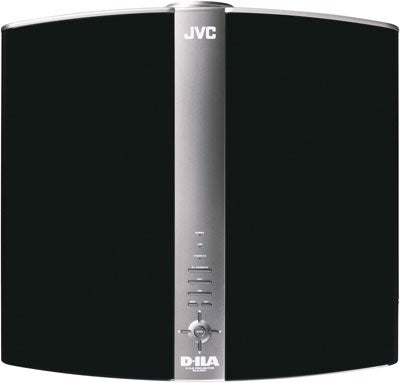 It does no harm to this clarity either that the HD1’s D-ILA technology pretty much precludes any types of noise. There’s nothing to be seen like DLP’s rainbow effect or motion dither, and the exceptional density of the pixel placement in the D-ILA chipset means there’s no sign of the pixellisation or ‘chicken wire effect’ like you might get with an LCD projector.


Yet another strength of the HD1 concerns its colours, which are remarkably vibrant for an LCOS-type technology, as well as being unusually natural in tone – a side benefit, we suspect, of the groundbreaking black level achievements.


So does the HD1 have any weaknesses? Well, we guess the picture isn’t especially bright, and so probably won’t suit a room that has any ambient light in it. But if this is the price that has to be paid for the HD1’s amazing black levels, then we’ll happily pay it.


JVC has arrived on the home cinema scene with one heck of a bang. The HD1 is not just a good projector, or even a great one; it’s actually nothing short of revolutionary for its price point, and gives its DLP and LCD rivals some serious food for thought…