Up until I was handed the XA-F57 to review I have to admit that I didn’t know JVC made MP3 players. It seems that every electronics company feels it has to offer a digital audio device to truly be part of the 21st century but I found myself wondering if JVC, a company I still associate with VHS recorders, can bring anything new to the MP3 party.


The first thing I noticed was the branding that JVC has chosen for its players – ‘Alneo’. Speaking on a personal level I have to say that I’m really not sure about this word. It sounds more like something you’d suffer from than a desirable brand of MP3 players, but I tried not to let that prejudice me.


The XA-57 is a small bean-like player, buts it’s flatter and wider than Sony’s similar shaped players. If you’re in the market for a flash player the obvious competitor is the iPod nano. At 17.5mm the JVC is much thicker, but at its longest edge it’s only 73mm, compared to 90mm for the nano. 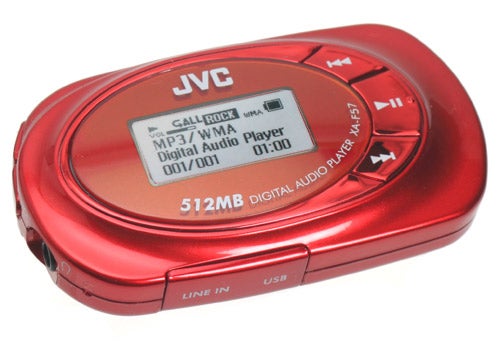 The player is made of plastic but pleasingly it felt good in the hand, – not too cheap or tacky.


The player charges via the USB cable and battery life is rated at 11 hours, less than the 14 hours of the nano. The battery isn’t replaceable.


The main appeal of the ‘Alneo’ really, is that it comes in multiple colours, some of which are quite funky. The one we were sent was a rather fetching red – hence the rather precise name of the XA-F57R. The player is also available with an S suffix – silver, a P suffix – pink, and an A suffix – Blue. No, I don’t get that last one either. You can get black and white as well. 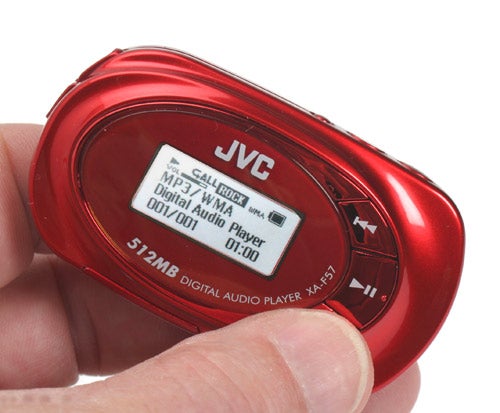 The 57 range all have 512MB of memory, which is bottom-end these days. You can get the same player in the same colours but with 1GB of flash memory and these are called the XA-F107E.


For those that don’t like music managers, this JVC will appeal. You just plug it in to Windows XP via USB and it’ll just pop-up as a drive letter. (Windows 98 drives are supplied. Is anyone still using this?). You then just drag and drop onto it, either loosely or via folders. This means that you can just use it as generic storage. However, you need to use a USB cable with mini-USB at the player end, so it’s no real replacement for a USB key. 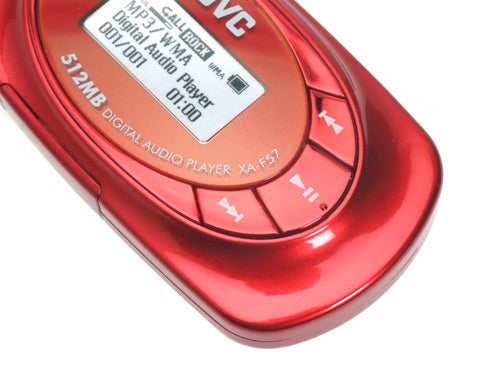 When copying files over I have to say that I was shocked by the speed of the file transfer, or rather lack of it. The first time it took me three minutes just to transfer 111MBs. That’s 0.62MBs per second, which isn’t even close to USB 1.0 speeds. I was using a USB hub so I tried again with a direct connection but still only got 0.65MB/s. If you ever want to transfer tracks in a hurry, you’ll find yourself swearing at this sluggish little player.

Navigation is similar to that of the MSI player I reviewed here, but somehow it’s a lot less painful to use. There are no silly 3D icons, no pointless colour screen and therefore no needless photo viewing. Instead there’s just an easy to read four line LCD display. When a track is playing you’ll find the Album playing, a scrolling track title, the format, the sound preset, the volume level, the time elapsed and the number of the track on the player.


Press menu on the top of the player and the forward and back keys to move between icons. Pressing the stop button brings up the list of folders. However, the player doesn’t show ID3 tags, just file names. I don’t like this but some prefer it. Volume controls are located on the rounded top side of the player, and it does feel quite natural to hold it in the hand and change volume. There’s a hold button on the underside to avoid unintended button presses. 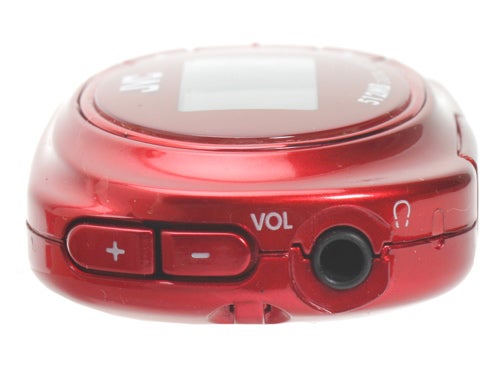 Inside the settings menu you’ll find EQ presets, which I found necessary to beef up a rather thin sound, even on my preferred Koss Porta Pro headphones, which are quite bassy. I stuck with the rock preset to correct this.


The supplied headphones are better than average for bundled phones with plenty of snap, in the sound and have braided cords with a neck strap. 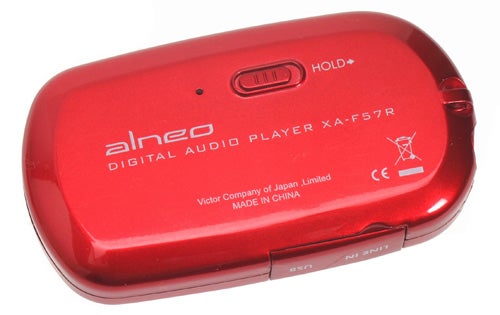 In settings you’ll also find a sleep timer, so you can leave it on as you drift off into the land of nod, and not waste the battery. The final feature of note is an analogue line-in recording mode, which creates files in MP3 format. The line-in and USB port is located underneath a plastic cover that sits flush to the player.


Overall, I must admit that I generally really don’t care for inexpensive MP3 players, as they are usually quite awful. However, I was pleasantly surprised that name aside, the Alneo is a surprisingly inoffensive, simple to use MP3 player.


JVC has clearly taken steps to make this device feel a cut above the normal bargain-bin audio player. However this is possibly the reason that it lacks the value appeal that many of these devices have. At £79 for only 512Mb of storage it’s not great value. If you’re looking for a digital audio player with my preconceptions or expectations there’s no reason not to spend an extra 20 quid, get a 1GB iPod nano and be done with it.

However, if you really want line-in recording, to play WMA or just hate Apple, then this is a perfectly decent choice, even if it’s not outstanding value.


The capacity isn’t that impressive for the money but with its good-in-the-hand feel and funky colouring, the JVC Alneo XA-F57 has charm enough to raise itself above the run-of-the-mill. If you need line-in and WMA support it’s worth considering – if not, buy an iPod nano.