Do you remember the paperless office? Someone somewhere in the world of IT came up with this fabulous idea a few years ago that the advent of electronic documents, email and collaborative technologies would eliminate the need for pen and paper altogether, saving businesses bundles of cash and the countryside from a whole lot of landfill.


Instead our offices seem to be churning out even more paper than ever. Most people still prefer, in the eternal words of Blackadder’s Baldrick, a “papery thing tied together with string” to scrolling through a 600 page novel on the screen of a PDA or tablet PC. Furthermore, everyone is still using pens and – sharp intake of breath – ring-bound notepads to scribble down notes in meetings. 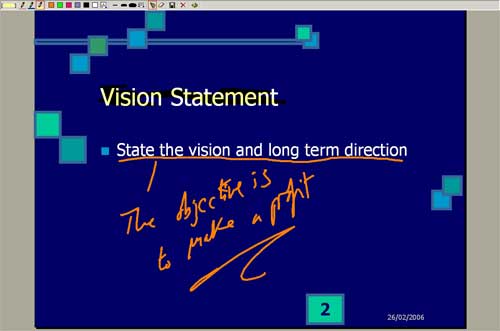 How can this be? Surely the all-conquering behemoth that is the computer industry could have pooled its collective resources to stamp out such primitive behaviour by now? Well, incorporating the convenience and ease of use of pen and paper with the power of computers is clearly a knottier problem than the eggheads first thought. Despite their failure so far though, it seems that they’re still going hammer and tongs at it.


The latest effort at tackling the problem of comes from Wacom, the German graphics tablet manufacturer. Its JustWrite Office software aims at turning your graphics tablet into an annotation and note-making tool. It’s designed to work with Microsoft Office – versions 2000 and upwards – costs around €29.95 if you want to buy it on its own, and is shipped free with some of the company’s tablet products.


The premise is pretty simple – once installed an extra toolbar is installed in Excel, PowerPoint and Word. This toolbar lets you write directly onto your documents in various colours and pen thicknesses, add yellow tags in the style of a Post-it note or even a signature at the bottom of a letter. There’s also a highlighter tool so you can bring attention to particular sections of text and in PowerPoint you get some extra drawing tools, though nothing you can’t already do with that application’s existing drawing features. 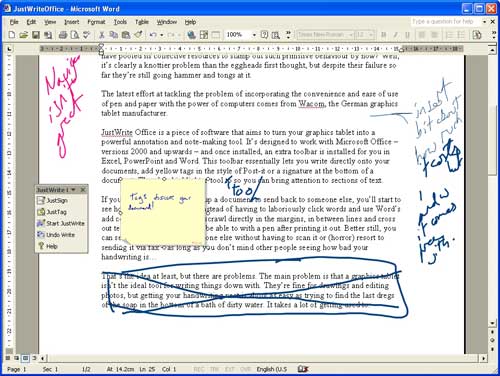 If you’ve ever needed to mark up a document to send back to someone else, you’ll start to see how useful this could be. Instead of having to laboriously highlight with a mouse and use Word’s Add comments tool to type out corrections, you can scrawl directly in the margins, in between lines and cross out text – just as you would do with a pen after printing it out. Better still, you can send the document to someone else without having to scan it back in or (horror) resort to sending it via fax. That’s as long as you don’t mind other people seeing how bad your handwriting is…

That’s the idea at least, but there are problems. First off, a graphics tablet isn’t the ideal tool for writing with. It may be fine for drawing and editing photos, but getting your handwriting neat while you look at a screen and write on the desk is about as easy as trying to find a small bar of soap in the bottom of a bath full of dirty water.


The other problem is that, despite the simplicity of its function, this is not the easiest piece of software to use. You soon find that there are plenty of things that begin to grate on the nerves as soon as you start to use it in anger. I tried using it to proof read and mark up this review, but quickly switched to my trusty old red biro instead. 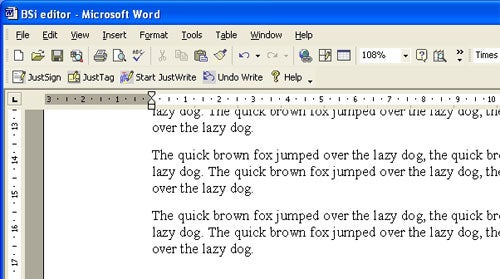 The principal issue is that navigating documents is downright awkward. For reasons I can’t entirely fathom while in JustWrite mode, the software disables the cursor, Page Up and Page Down keys preventing you from nipping between pages and paragraphs with one hand, while making notes with the other. Using the scroll bars is no easier. Every time you try to use them there’s a short but irritating delay and a quick screen refresh.


But these are not the only niggles – JustWrite Office has plenty of other annoying foibles. The software ‘forgets’ which pen thickness and colour you were using last time you were in JustWrite mode. When flicking between JustWrite mode and back again, it changes the view, automatically zooming the page to full screen width, which causes you to constantly lose your place. It’s buggy too – it won’t let you use ALT-TAB to switch between applications while in JustWrite mode. And, finally, the yellow Post-it style tags simply sit on top of documents – they’re non-collapsible, can’t be made transparent and just get in the way.


The idea behind JustWrite Office is, essentially, a good one. Being able to hand annotate electronic documents and then send them via email is extremely appealing and it’s certainly a good paper-saving idea. At 20 quid it’s reasonably priced too. Unfortunately there are just too many ease of use issues and irritating niggles here and these, ultimately, are too much to give it anything but the thumbs down. 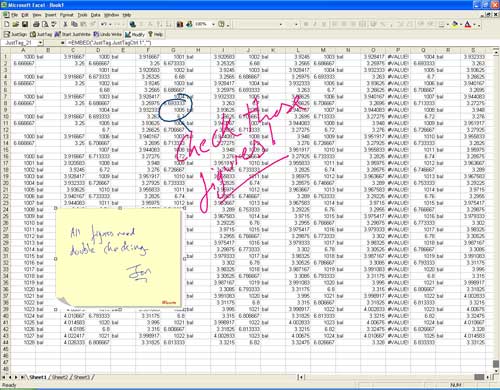