What is the Judge JEA57?

Judge is renowned for creating core kitchen products that combine functionality with affordability. Consisting of a one-piece coolant-filled bowl that pops into the freezer, a paddle to churn and a detachable motor body, The JEA57 Ice Cream Maker is both compact and simple to operate. After a minimum bowl freezing time of eight hours, it will make up to 1.5 litres of softly whipped sorbet, frozen yogurt or ice cream in 20-40 minutes. 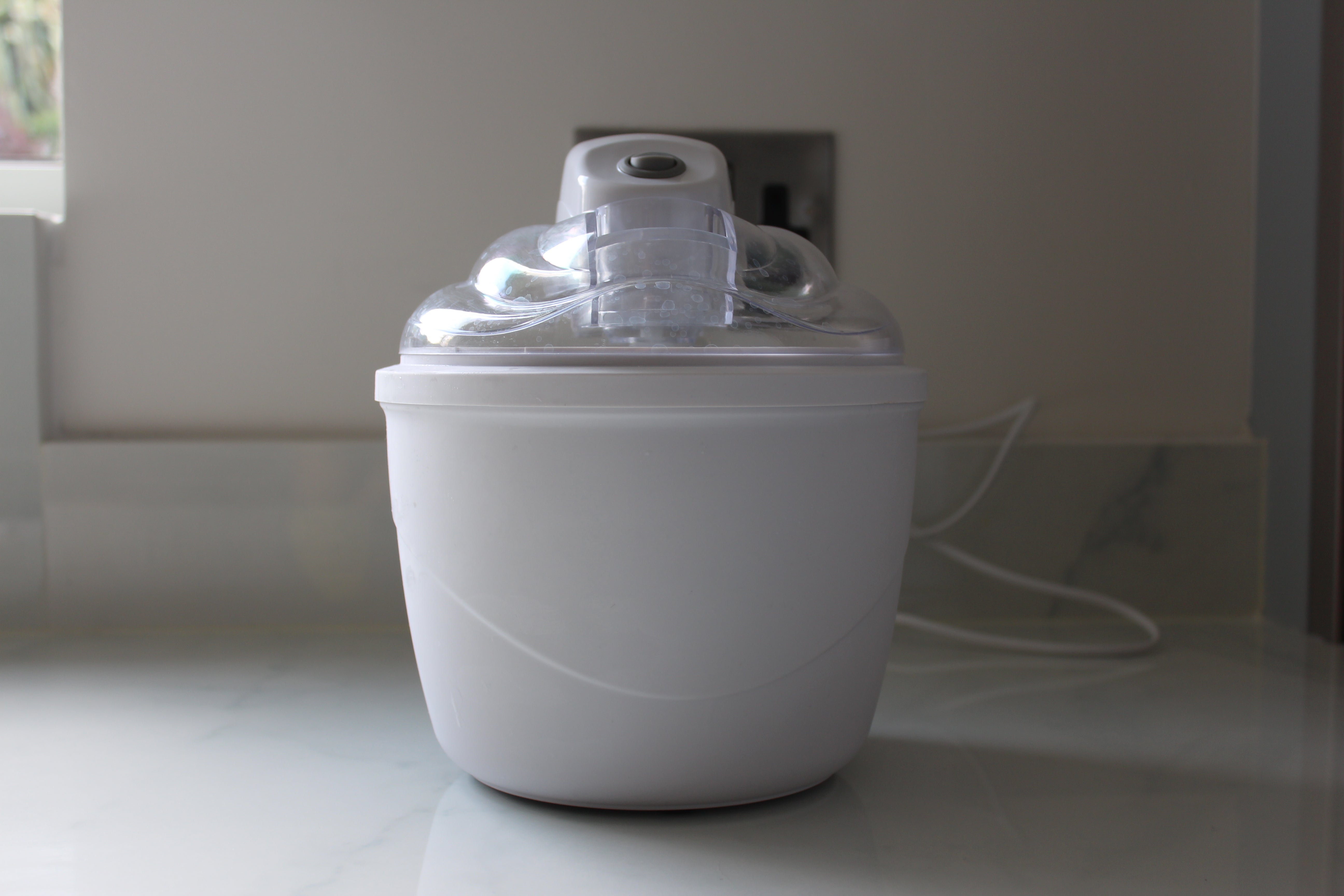 The JEA57 sports a simple white finish for the bowl and the motor body, a clear lid, enabling you to keep an eye on your ice cream’s churning, and a paddle that connects to the motor body via a drive shaft. Using the machine is clear-cut as its design. There’s a rocker switch to turn it on and off and a narrow chute for pouring in mixtures while the paddle is rotating.

Unlike comparable machines that may have both an inner and outer bowl, one bonus of this model is that it has only a single bowl that can live in the freezer during the summer months. So, during this period, there will only ever be a few parts that require storage, making the JEA57 perfect for small kitchens. Another big plus is the detachable motor body, which means that all parts that come into contact with food can be cleaned in the dishwasher, leaving you with more time to enjoy frozen sweet treats. 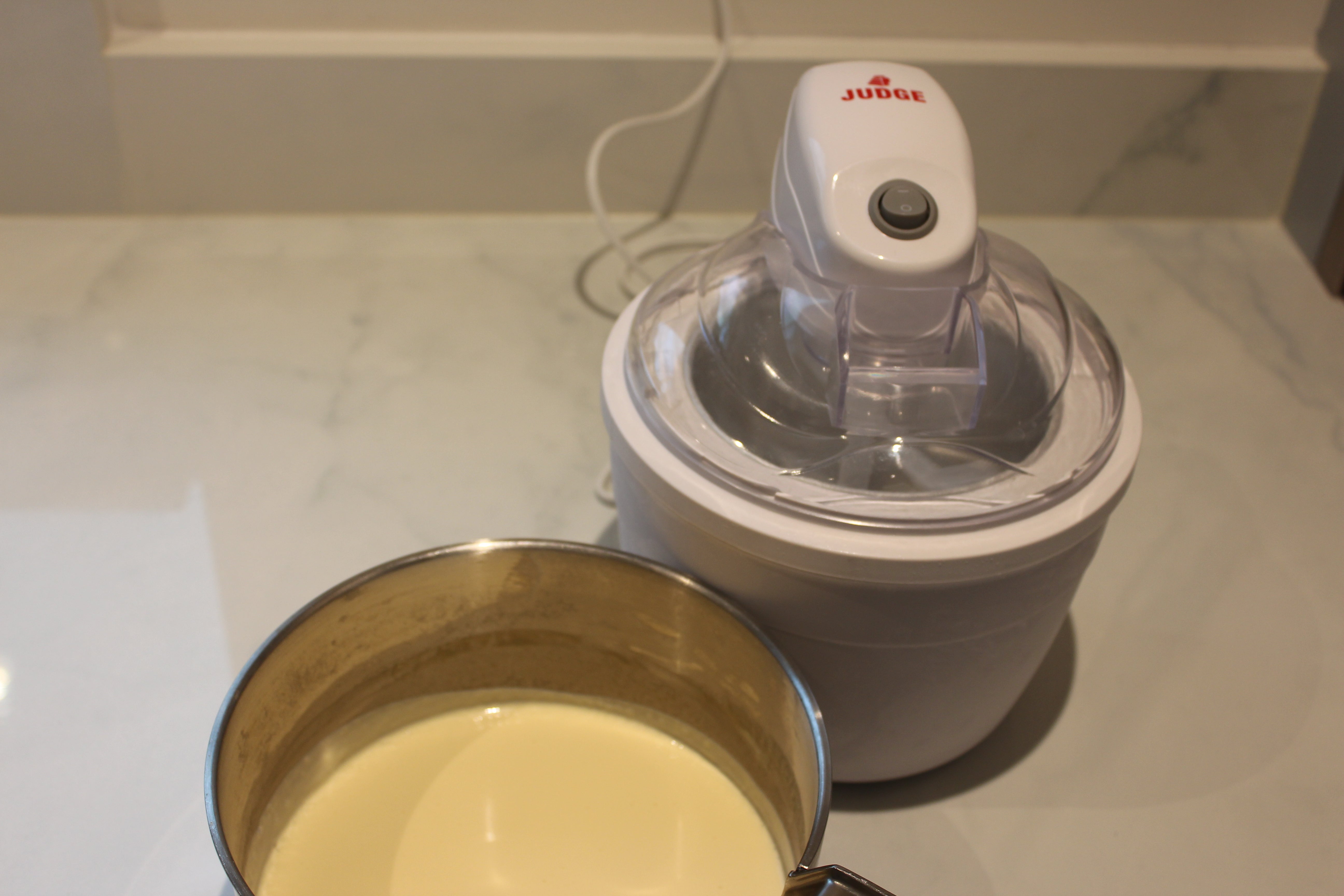 JEA57 Ice Cream Maker – What is it like to use?

One of the downsides of this ice cream maker is a lack of inspirational recipes – it includes only two, one of which is a custard-based vanilla mix that requires advanced preparation, and a raspberry frozen yogurt that can be assembled in minutes.

The ice cream maker’s bowl needs to be frozen in advance. Fortunately, it was compact and fitted easily in a freezer drawer. After eight hours, I removed it and checked it was ready by shaking it as advised, listening and feeling for liquid movement in the coolant.

Satisfied that it was solid, I twisted on the lid with the motor body and paddle in place and started it rotating. Compared to similar models, its operation was quieter and unobtrusive. This remained as I added the first mixture for ice cream, comprising egg yolks, milk, cream, sugar and vanilla essence. The mixture was thin enough to pour from a jug, but since the chute wasn’t very wide some of the mixture splashed onto the top of the paddle and around the opening.

After 20 minutes, I checked on its progress – the mixture was still visibly liquid. I left it churning for a further 20 minutes, after which there was some solidity. While the ice cream was frozen on the bottom and sides, once removed there was some liquid ice cream remaining in the middle. This may indicate that the bowl would benefit from freezing for longer than the time stated. The motor body was noticeably warm to the touch – 40 minutes being the maximum recommended running time. Extra freezing helped solidify the ice cream.

Next, I tried the sorbet using a mix of raspberries, sugar and yogurt. This time, I froze the bowl for 10 hours before adding the mix. After 10 minutes, I checked its progress by removing the lid; it had just started to freeze. Twenty minutes on and the yogurt had frozen sufficiently to gather around the paddle and was solidifying on the sides of the bowl too. Once removed, the consistency was that of a soft serve. Should I buy the JEA57 Ice Cream Maker?

The JEA57 is a little costlier than a basic model, so for the price you’d expect a greater number of features alongside a wider chute to reduce mess and accommodate any chunky additions to your mix. Plus, to get maximum use out of it, you’ll have to source your own recipes or be confident enough to experiment.

However, in its favour, the build quality feels more robust than some machines on the market and the fact that it’s dishwasher-safe makes it an affordable starter machine that’s likely to be used frequently.

A good gelato go-to that won’t crowd your kitchen if you store the bowl in your freezer.