What is the John Lewis JLBIFF1807?

While modern freestanding fridge freezers often look great, sometimes you just want your appliances to disappear. If that’s the case, you’ll need an integrated fridge freezer, and John Lewis offers its own.

The JLBIFF1807 is a fridge freezer aimed at those with who store lots of fresh produce, offering a massive fridge capacity allied to a compact freezer. LED lighting, digital controls and extensive shelving and pockets make for an incredibly flexible storage space, with quiet running and A+ energy efficiency a welcome addition. 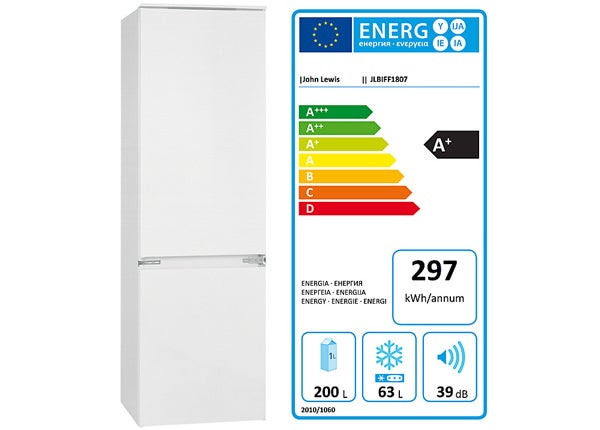 Being an integrated fridge freezer, set for being seamlessly installed unto a tall kitchen unit and fitted with furniture doors, the JLBIFF1807 is not much to look at externally. It is finished in hardwearing white paint with mounting plates and screw holes for the door fittings and comes with a bag full of hardware.

Fitting integrated appliances is a relatively straightforward DIY task, but fitting the cupboard doors to the appliance and getting them perfectly lined up with your kitchen units can be a challenge – so John Lewis’s £85 installation fee is well worth considering. Thankfully, integrated appliances are all about what they look like on the inside and the John Lewis Built-in Fridge Freezer (JLBIFF… see what they did there?) doesn’t disappoint.

Open the top door and you are greeted with a vivid white LED light to the top-right of the compartment. This brightly illuminates the entire fridge compartment when it is empty, but be careful where you put jars and tubs on the top shelf as it may block the light and cast shadows. 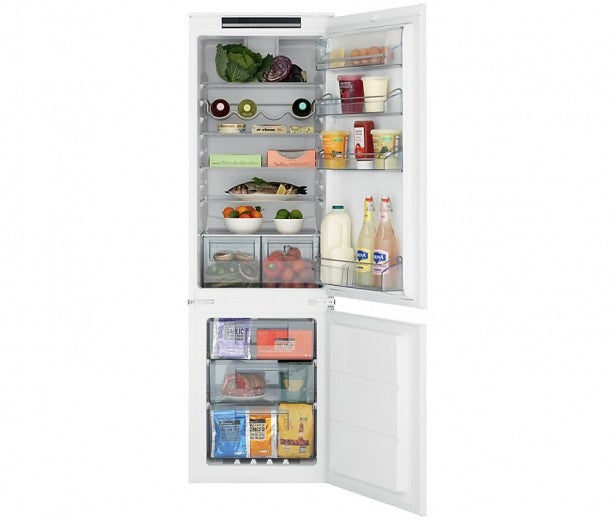 The cooling fan outlet protrudes into the top shelf space, but this should ensure cool air is well circulated throughout the fridge compartment. Despite being a little shallower back to front than freestanding appliances, the fridge space boasts a big capacity and a lot of furniture. Lower down in the freezer compartment, things are a little more bijou and compact as the large fridge space does rob you of frozen food storage capacity.

Along the top edge of the doorframe, the control panel is a suite of slightly incongruous looking stainless steel buttons and a gloss black plastic fascia with red LED segment display. There is no other brushed stainless or black plastic on the machine and, conceptually at least, I find a ‘warm red’ display out of place on a cooling appliance. Your tastes may vary.

That said the controls are easy to operate, easy to read and very informative.

With a capacity split of 80/20 in favour of the fridge, the JLBIFF1807 is heavily biased towards chilled foods and gives a properly capacious space for day-to-day fresh produce.

It is well appointed in interior furniture too, perhaps too much. You get no less than five glass shelves on top of a pair of side-by-side salad drawers and four full-width door pockets. Add in the wire hanging bottle rack and it is starting to get rather crowded in the fridge.

As it comes out of the box, with all shelves evenly spaced, we could not find enough shelf height for a bottle of ketchup. Unless you have a lot of very small items to go in the fridge I suspect many users will remove at least one of the shelves to give more height per shelf.

Salad drawers and door pockets are clear plastic with a fresh blue tint and the wire trim of the latter helps to hold bottles in place and match the bottle rack. The middle two door pockets have a height adjustment and the top compartment has a flip-over lid, ideal for storing dairy produce. The salad drawers are basic plastic storage bins with no separate temperature or humidity control, but, as cool air sinks, this area should be the coolest in the fridge compartment anyway. 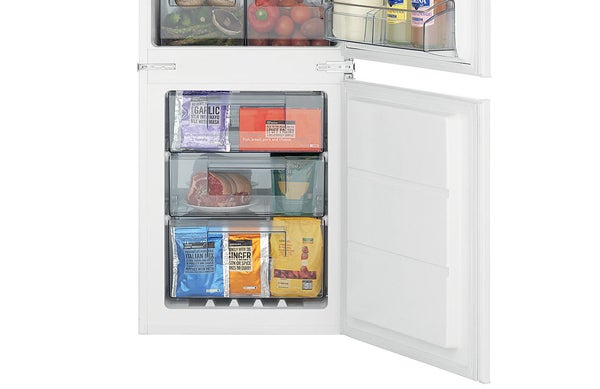 At just 55 litres of storage space, the freezer compartment is unlikely to be sufficient for a large family unless there is a secondary freezer somewhere around the home. Aside from the frost-free operation, the freezer is basic with three small, clear plastic drawers each marked with some recommended storage times for various foods.

The drawers have large moulded-in handles which are easy to grab. Their size dictates they won’t be too heavy even when loaded, so the sliders (rather than runners) should prove fine.

The last freestanding John Lewis fridge freezer we tried was a little noisy and a bit of a ‘burper’ – it made lots of gas gurgling noises. Not so the JLBIFF1807, which proved much quieter in operation with just a gentle hum. Built-in models benefit from the extra noise insulation of being fitted snugly into cabinets, too.

This model registered just 39dB fitted into our test carcass but without furniture doors attached. Add doors as well and this fridge freezer should be as a quiet as a mouse in your kitchen. 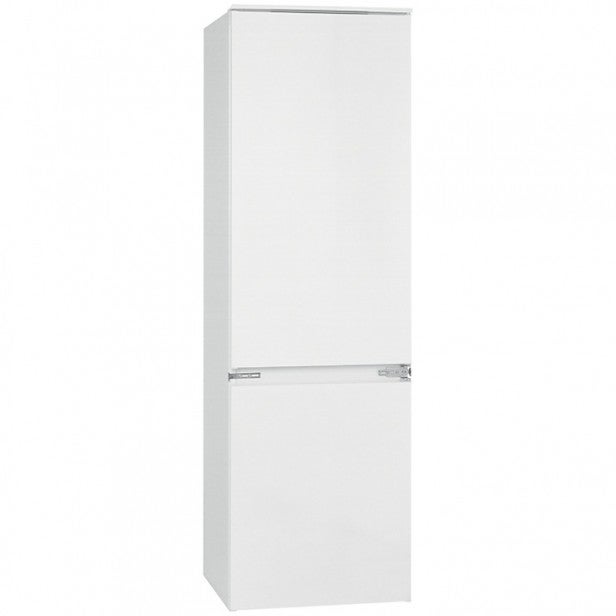 Using a traditional compressor motor with an equally old-school two-hour long compressor cycle and top-mounted fan, it was no surprise to find a marked temperature difference between shelves in the fridge. The top shelf averaged 7 degrees C, the mid shelf 4 degrees and the salad drawer 3 degrees C.

As long as you store food accordingly (bottles and jars on top, dairy in the middle, salad and meats at the bottom) that is a very acceptable spread of temperatures.

The long compressor cycle does mean each shelf varies quite a bit, up to +/- 2 degrees, meaning the top shelf creeps up to nearly 8 degrees C at its warmest and the salad drawer dips to 1 degree at its coolest – although that is still high enough to keep fresh fruit from ‘frosting’.

On the face of it, the freezer works well with all three shelves averaging around -18 degrees C and the frozen food sample keeping at between -19 and -20 degrees C. However, the long compressor cycle has its most noticeable effect on the freezer compartment’s consistency and its temperature swings wildly about the mean temperature every couple of hours. 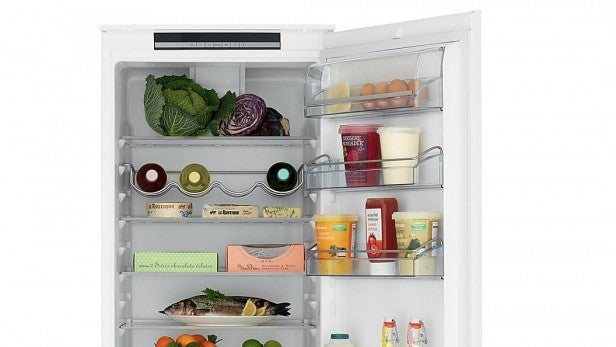 The top drawer, where the cool air outlet resides, is the worst offender, dipping to -26 degrees C and then raising up slowly to -8 degrees C before the compressor cuts in again. That is a whopping +10/-8 degree swing and the biggest temperature range throughout the cycle we have ever recorded in a freezer. The lower two drawers were better but not brilliant keeping around -19 degrees C, at +/- 3 degrees.

Large temperature swings are not great for keeping food fresh for the longest period of time and trouble arises if there is a power failure when the compartment is at the warmest part of its cycle already. In fact, our power fail test kicked in when the freezer was at its coolest, which artificially improved the test results.

The frozen food sample rose to only -14 degrees C with the air temperature in the three shelves hitting -6, -11 and -12 from top to bottom. While the -6 degrees C is poor, the other results are acceptable. However, had the power failure happened when the top shelf was already at -8 degrees C the results would have been disastrous.

Chances are the top-shelf air temperature would have exceeded zero degrees (the point where food begins to defrost) in around four hours. We would therefore only give this machine a power failure safety rating of four hours despite the specification sheet’s claims of 21 hours. Oh dear.

How we test
In keeping with our test process for freestanding fridge freezers, we loaded the John Lewis Built-in with 0.5kg of mixed foods per 10 litres of capacity in the fridge, and 1kg of food per 10litres of capacity in the freezer. To this compartment we also added two litres of room temperature water to give us a ‘fresh to frozen’ time test and examine the effect on frozen food of a power failure.

Eight temperature probes were placed on shelves and drawers from the top to the bottom of the JLBIFF1807, including in the water sample. Opening the doors a few times per day we looked at the temperature of each shelf and how consistent it was throughout the test period of several days. Wet set the fridge to 4 degrees C and the freezer to -18 degrees C.

With its traditional compressor motor and long cycle times, it was little surprise that the JLBIFF1807 running costs were a bit old school too.

From our tests we calculate the annual energy consumption would be around 235kWh, or around £35 per year. By current standards of best-in-class freestanding fridge freezers that is rather high considering its limited freezer capacity. 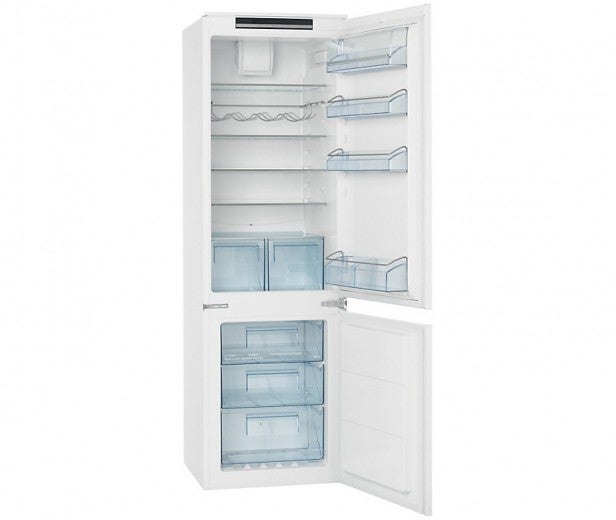 Should I buy the John Lewis JLBIFF1807?

Quite simply, no. While the basic design and features are satisfactory, the poor freezer performance and so-so temperature consistency in the fridge section is not what we expect of a £700 appliance.

Worse still si the food safety limit, which could be as little as four hours if a power cut occurs at the wrong time during the compressor cycle. We’ve had some good appliances from John Lewis in the past, but this isn’t one of them.