A powerful iron, but the JML Phoenix Gold FreeFlight Cordless is fiddly to use and not very powerful in cordless mode.

What is the JML Phoenix Gold FreeFlight Cordless Iron?

Describing itself as the “gold standard in cordless ironing”, the JML Phoenix Gold FreeFlight Cordless Iron is a powerful corded model that can be used as a cordless model. It has a ceramic soleplate with precision tip, a 162g steam burst, and you can also refresh clothes and fabrics by steaming them vertically.

The Phoenix Gold FreeFlight comprises two parts: a base and a cordless iron. Once the iron has reached the correct temperature, it’s possible to take it off the base and use it without a cord, just returning it to top up the heat. You can also lock the iron on to the base by using the base-lock switch found on the rear of the base, using the two together as a heavy corded iron, if you wish. 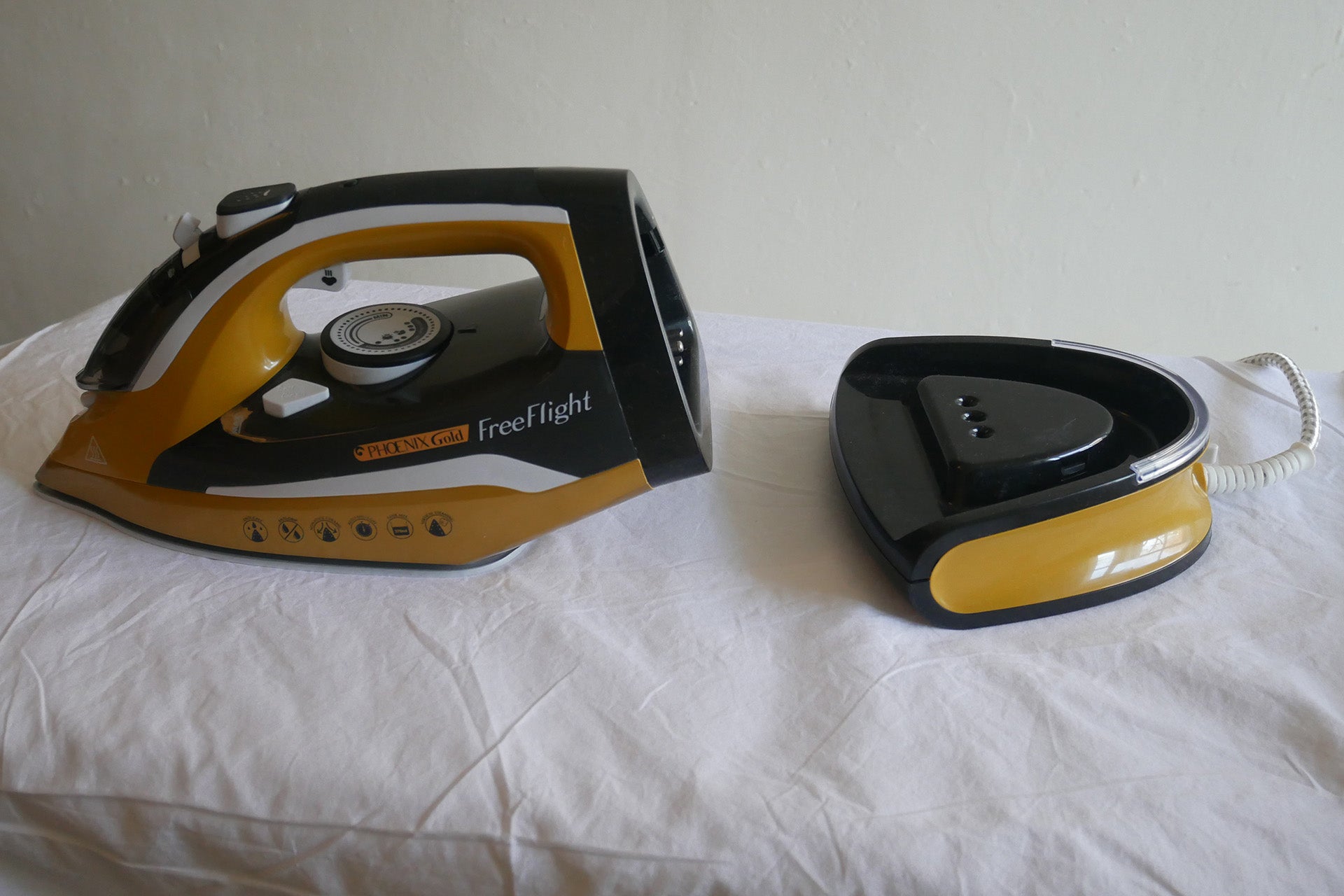 The base has a blue, automatic shut-off light curving round the back of it that blinks if the iron has been idling face-down for 30 seconds; if no action is taken, the iron goes into sleep mode. It also does this if the iron is upright on its base, doing nothing, for 30 minutes.

The light on the base also comes on when you switch the iron on, and then a narrow orange temperature indicator light on the body of the iron glows until the soleplate has reached the required temperature – at which point it clicks off. It does this every time you return the iron to the base to heat up after it’s been in FreeFlight mode.

The Phoenix Gold FreeFlight Cordless Iron has a slightly pinched-in point for going round buttons, a spray nozzle above it that’s operated by a variable spray button further back along the top of the iron, and a steam selector on top of the handle that clicks left and right. On the underside of the handle is a steam-blast trigger, and on the main body of the iron is a self-cleaning button and a variable temperature control dial. 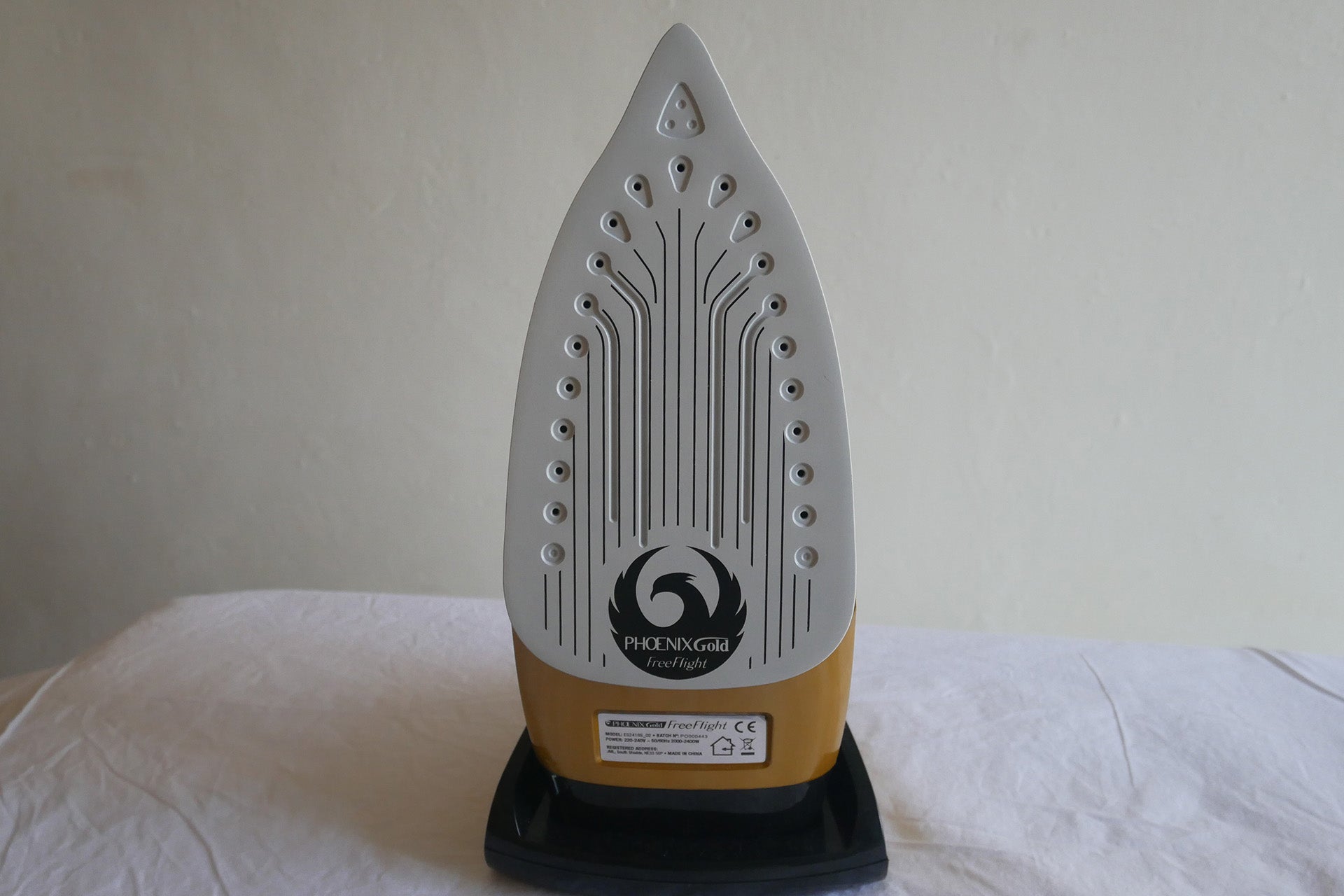 The iron needs to be cleaned every 10-15 days. To do this, fill up the tank to the”‘max” level and set the steam selector to “off”. Then you stand the iron on its base and turn the temperature control dial to “max”, allowing the iron to heat for two minutes. Next, unplug the iron, remove it from the base, and hold it horizontally over a sink, pressing the self-cleaning button repeatedly for a minute to force steam and water through the soleplate to clear any deposits. You repeat this procedure in hard water areas. When the iron has cooled, turn it on at the mains and allow it to heat for two minutes to dry out any residual water inside the steam chamber.

Although the 370ml capacity tank is a selling point for the Phoenix Gold FreeFlight Cordless Iron, you can’t actually use the last 70ml; once you’ve poured in 300ml, the water has reached the “max” mark. The tank is also tinted such a dark charcoal colour that it’s almost impossible to see the water level, even in daylight. I had to use a torch to check it, which was annoying. Its 370ml tank uses 50/50 tap water and distilled, or de-mineralized water – aka “de-ionised” – in hard-water areas.

If you’re ironing something delicate and fussy, such as a complex ruffled shirt or dress, then the ability to do so without a power lead getting in the way might be a plus. Otherwise, it’s hard to make a case for having a FreeFlight iron. Most power leads are long enough and you’re likely to be ironing only on the finite area of an ironing board.

As for steaming clothes on hangers, or taking the folds out of curtains, those are definitely situations where an iron without a cord would be useful – but they both require quite a lot of steam and heat. Using an infrared thermometer, I measured the heat of the Phoenix Gold FreeFlight soleplate immediately after taking it off the base, and a minute later. The iron cooled quickly.

The Phoenix Gold FreeFlight Cordless Iron did a good job on delicates, woollens and cottons, and the tip manoeuvred well around buttons. The water spray was good, and you could press it slowly for a dense, heavy spray that visibly spattered on a cotton sheet, or fast for an almost invisible vapour, which was excellent. 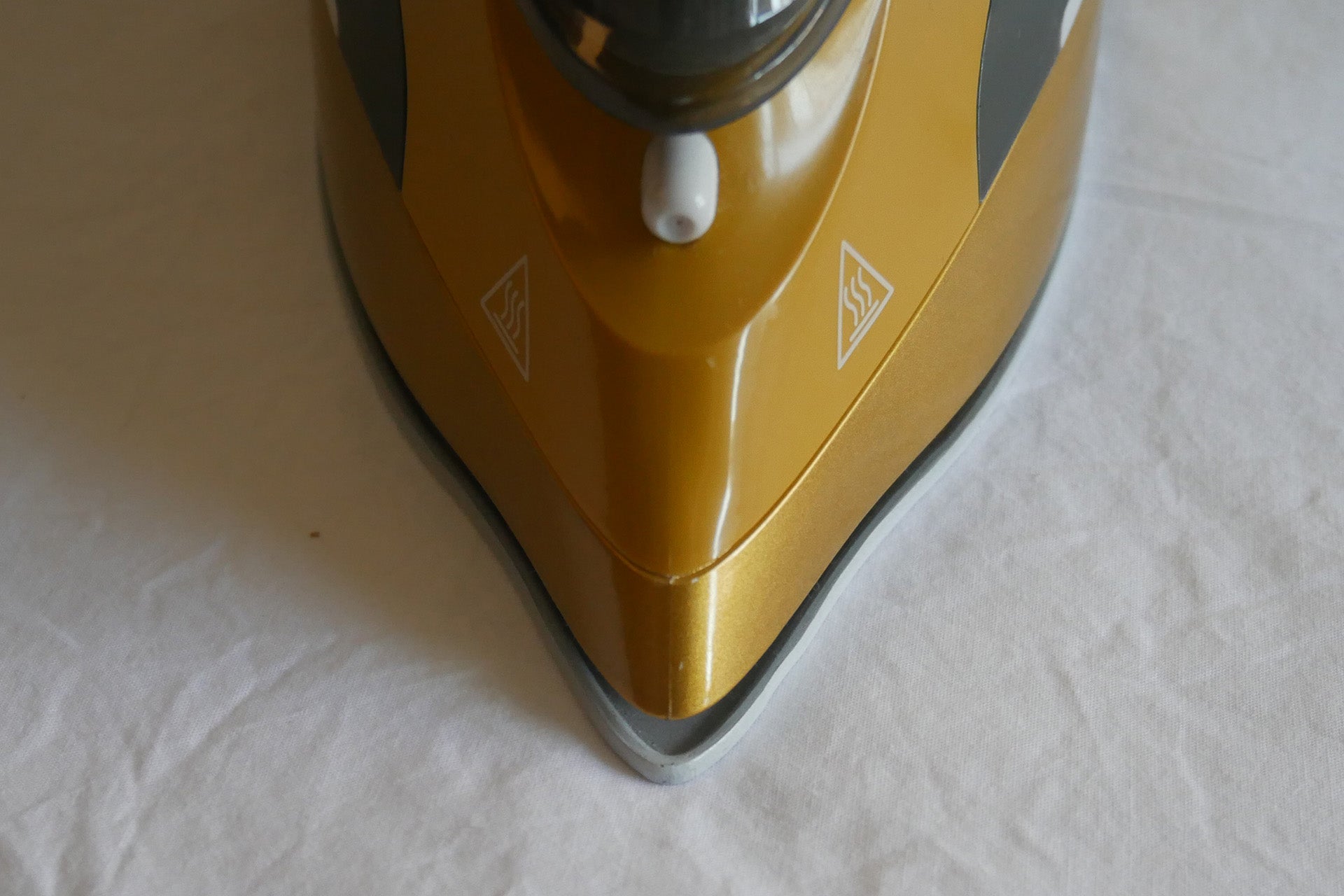 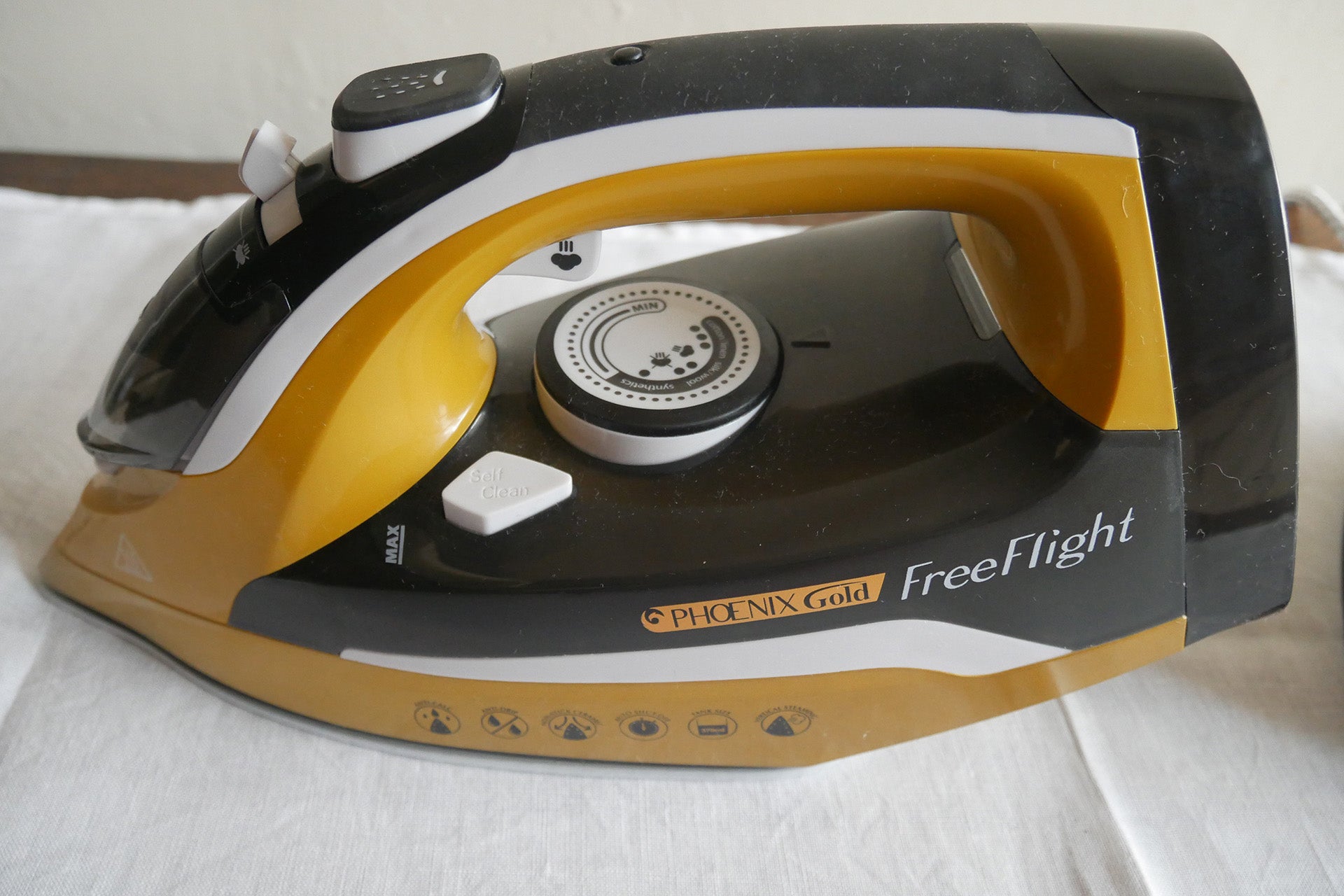 With 48g/min of continuous steam, the Phoenix Gold FreeFlight was nice and steamy. At top heat, with the steam selector on, it needed refilling after 33 minutes. To get sheets super-crisp and press any wrinkles out of dry linen, I found I had to use the iron with the base clipped to it. The makers advise doing this for tough jobs, to impressive effect – but it felt a little peculiar. I had the unnerving feeling I was doing something I shouldn’t, and it was clunky.

The Phoenix Gold FreeFlight didn’t manage to get all the crinkles out of bone-dry heavy linen, but that’s a difficult challenge, and I didn’t really expect it to. However, it produced nice results on fabrics that were slightly damp, and ironed well through four layers of a folded sheet.

The Phoenix Gold FreeFlight Cordless Iron is a solid iron with some very useful features – such as the ability to automatically shut off after 30 seconds of being horizontal. The variable water spray is a good touch, too. It’s also nice and steamy with a steam shot.

However, the dark water tank and the need to keep flicking the steam selector back and forth to get both steam and a steam shot is irritating. I wasn’t convinced by the FreeFlight option, and using it with the base clicked on felt peculiar. There are better standard options in our Best iron roundup.

A powerful iron, but the JML Phoenix Gold FreeFlight Cordless is fiddly to use and not very powerful in cordless mode.