There have been so many innovations in mobile phones in recent years that it would seem impossible for a £69.99 pre-pay handset to bring anything new to market. Well this one has, and it is something very cool indeed…


From JCB (yes, the digger manufacturers) comes the ‘Tradesman’ – the world’s first handset to ”float” in water. Naturally this wouldn’t be particularly useful were the phone not water proof, but it is and for this alone you’d think it would be a hit with sailors and – as the name suggests – tradesmen, particularly plumbers (don’t think about that image too long). It is also useful for the more butterfingered amongst us.

In fact it is primarily this latter market where the Tradesman is expected to appeal, because aside from its inherent water wings, it is also a toughphone despite its wallet friendly pricing. It backs this up with an IP67 rating which means it has passed the International Protection Rating for solids at level six (out of 6) and liquids at level seven (out of 9). This means the Tradesman allows no ingress of dust or dirt into its inner workings and can be fully immersed in water at up to one metre for up to 30 minutes – something that should never need to be surpassed given its buoyancy.


What other tough credentials does it bring to the table? The Tradesman will operate in temperate ranges from -20 to +60 degrees centigrade, while a “military specification” also means it’s specially hardened outer plastic casing can survive drops of up to three metres. In something of a publicity stunt JCB tested the handset by dragging it behind a JCB GT at a whopping 120mph, buried it in two tonnes of rubble and put it inside a working cement mixer for a minute. Needless to say it tells us this because the Tradesman survived the ordeals.

The flipside of a truly rugged handset (read: not a Defy), is it won’t be replacing your smartphone any time soon. The Tradesman has a small 1.44in screen, sends SMS, is equipped with Bluetooth 2.0 and makes phone calls. No 3G, WiFi, GPS, camera or user accessible storage (expandable or otherwise) though you will find a couple of basic games, an FM tuner and a handy torch. At 111 x 49 x 20mm and 86g (the manual quotes 130g, it’s wrong) it is also extremely portable – something you’d expect of a handset with a density capable of floating on water – while the basic features mean you’ll get up to 130 hours of standby time out of the modest 650mAh battery, there is only 180 minutes talk time.


So that’s the skinny, but how does this intriguing proposition measure up?

The most obvious place to start is it does indeed float! This is a weird site to behold, but also prodding the Tradesman under water sees it immediately bob back up to the surface. We found no ill effects to getting it wet either despite deliberately leaving it wet once we’d taken it out of the water. Given the price, this alone will be a deal maker for many.


As for the toughness, the Tradesman also passes with flying colours. We didn’t have a JCB GT to drag it behind or two tonnes of rubble handy (despite claims that Ed’s car could be described as such), but repeated drops onto grass then concrete with our arms stretched above head height refused to bother the Tradesman one little bit. 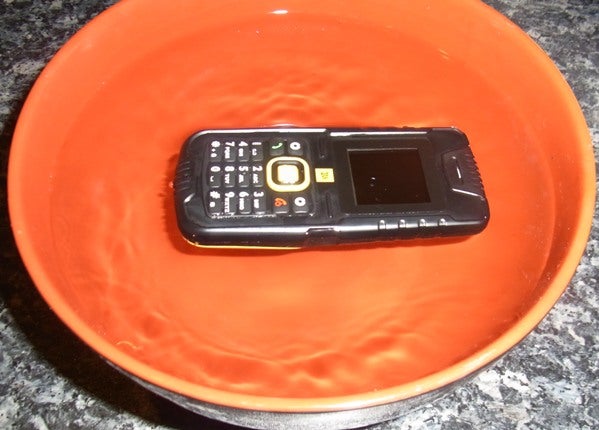 We do have some reservations over whether repeated direct impacts to the screen could prove vulnerable, but the reinforced display suggests it will stand up well. Given the Tradesman is made out of a strengthened plastic rather than shielded with soft rubber it does pick up scuffs and scratches, but far less than your average phone – especially considering there is no paint to chip.


So the Tradesman certainly lives up to its billing as a cheap tough phone and one with an extremely practical world first, but what about the rest of the package? Truth be told there’s not a lot to say. The software is extremely basic – you’ve seen something similar on a Nokia about 10 years ago, but that’s not really the point. You’ll never get lost in the menu and this is a phone for making phone calls, sending text messages and surviving rough treatment.

It is also worth pointing out that the Tradesman is pretty good at making phone calls – something many high-end smartphones seem to have forgotten – with dual built-in speakers to ensure you can be heard in noisy environments. You’ll find push-to-talk functionality as well, handy for organising groups if you all have PTT capable phones.


The ultimate goal of the JCB Tradesman TP121 is not to replace your cutting-edge smartphone, but to allow you to leave it at home when the going gets tough. For technophobes the Tradesman’s simple user interface offers a reassuring blast from the past, while simultaneously providing futuristic durability. With prices online as low as £69.99 (RRP £74.99) it is an ideal stocking filler for children and relatives.You should pick one up too…