In November we took a look at the JCB Tradesman TP121, a bargain buy £69.99 tough phone which could not only take a kicking and keep on texting, but even float on water. If you have more money to spend JCB also has a top of the line tough phone, the Pro-talk. The big question, however, is just because you have the extra money should you spend it?


The most obvious place to start answer such a question is the spec sheet. Exactly what is JCB offering with the Pro-talk that warrants an extra £190 leaving your bank account? On the surface quite a lot. 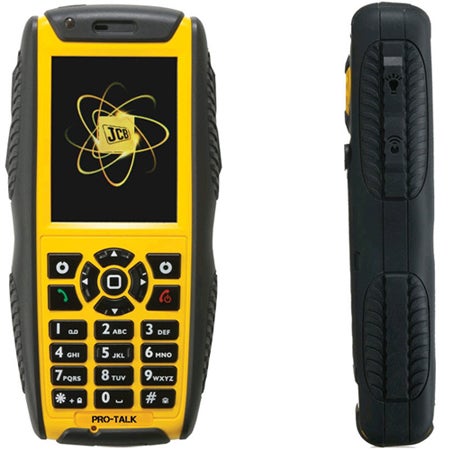 The obvious standout feature is a 2.2in QVGA touchscreen. Truly tough touchscreen handsets are few and far between and the larger screen is welcome over the tiny 1.44in display in the Tradesmen. On top of this you’ll find a 2MP camera, GPS, dual sim functionality and an eight channel two-way radio. For a tough phone this is positively plush.


So how does it all come together? In fairness in a fairly perfunctory way. The Pro-talk may have a few smartphone elements, but it remains a dumbphone with a navigation experience similar to what you’ll find on the cheapest of budget Nokias. You won’t get lost in the menu system any time soon, but similarly you won’t be downloading apps or even sending email. This didn’t matter with the £69.99 Tradesman, but for £259.99 the bar is set higher.


On the plus side it is hard to deny the convenience of a dual sim setup with the unlocked handset capable of swallowing sims from different networks and taking or making calls from either. Reception is also excellent since – like the Tradesman – the Pro-talk’s signal isn’t disrupted by numerous antennas for the likes of WiFi and 3G (GPS appeared to have no detrimental affects).

More frustrating was the two-way radio, not because it wasn’t any good, but because since we only had one review sample and aren’t partial to carrying around two-way radios we weren’t able to test it. Research tells me a conventional (non trunked) two-way radio is a fairly standard thing, but I suspect there are many better qualified who can fill me in on the detail. On the plus side, with eight different channels it should be possible to find a clear channel wherever you are.


Furthermore it isn’t the only clever touch JCB has introduced with the Pro-talk. Another which brought a smile to our faces is the bundled wind-up charger. Much like a wind-up radio, the charger has a handle which can be wound either clockwise or anti-clockwise to generate a current and in this case start the Pro-talk charging. This is extremely handy if you get caught short in the middle of nowhere – just the kind of place the Pro-talk is meant to be. That said it should remain a last option because (as anyone who has used a wind-up charger will tell you) it takes a lot of arm work to get a modest amount of charge. 10 minutes winding got us enough for about 3-5 minutes of call time, only really good enough for an emergency.

Thankfully you shouldn’t need the wind-up charger too often, because the Pro-talk has excellent battery life. This is partly because the 1800 mAh battery is nearly 3x the size of the Tradesman’s 650mAh battery. That said the Tradesman uses very little power and the Pro-talk can consume a lot with GPS. Despite this you should still get 3-4 days of moderate usage from a single charge and if you switch off the goodies it will stretch well past a week.


So how tough is the Pro-talk? Tough. Admittedly not Sonim XP1 tough, but not far off. The handset is certified to IP67 meaning no ingress of dust or dirt can be made into its inner workings and it can be fully submersed in water for a minimum of 30 minutes, though sadly – unlike the Tradesman – it doesn’t float. 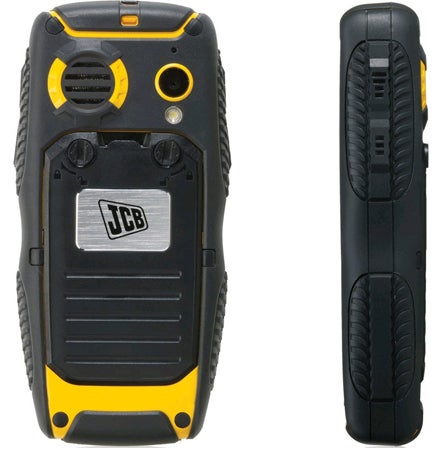 Then again when you carry out the full set of JCB tests there is little need to worry about giving the handset rough treatment and the touchscreen is the more durable resistive standard. This makes it less responsive than capacitive screens (as seen in the iPhone, Pre 2 and most Android and all Windows Phone 7 handsets), but it does mean it can be operated in gloves.


So ultimately the JCB Pro-talk offers a true tough phone experience with a few handy bells and whistles on top for an upper midrange price. Is this enough? If you need some of its core features such as the two-way radio and dual sim then yes, but if you only need a simple tough phone you’d be better off saving nearly £200 and opting for the Tradesman. On the flip side, if you want proper smartphone functionality and still wish to retain something with an IP67 rating, the Motorola Defy offers a full Android experience with 5MP camera and capacitive screen. With an unlocked price of under £290 (depending on discount from website-to-website) this would also offer better value for money.

We like the Pro-talk. It adds useful extra functionality such as two-way calling and dual sim yet retains all the toughness of JCB’s more stripped down Tradesman. The resistive toughscreen is also handy when gloves struggle to use the small keys on the physical keypad. Unfortunately it also falls between two stools. The Tradesman offers the same core experience for a fraction of the price while those seeking a tough smartphone will get more bang from their buck with the Motorola Defy. The Pro-talk is a good phone, but a niche one.