What is the JBL Playlist?

JBL Playlist is a wireless speaker with built-in Chromecast that streams audio directly from compatible apps such as Spotify, Deezer, Google Play Music and plenty more. Playlist’s compact design and reasonable price won’t make huge demands on your space or your bank balance, making it an appealing wireless proposition for music lovers everywhere. 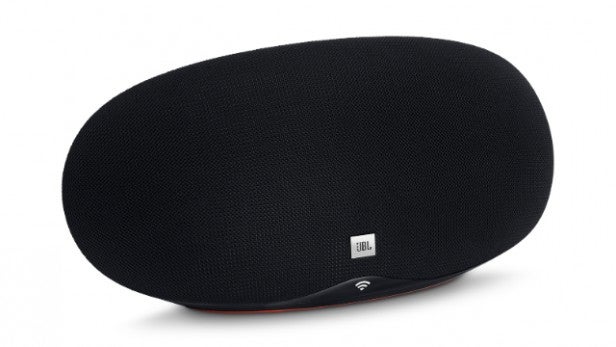 It would take a heart of stone not to be smitten by Playlist’s cute design. Chicly styled in white, black or blue, this curvy compact speaker is the ideal size for shelves and tabletops where surface space is limited. A smart fabric grille covers the front, punctuated only by a discreet JBL badge in the middle, while the grainy matte finish on the back is pleasant to the touch.

Construction is rugged and robust, but stops short of luxury. Its sturdiness is boosted by a vibration-quelling rubber pad on the bottom that stops it slipping about, while the top buttons are housed in a protective rubber panel. These include power, volume, play/pause, Bluetooth pairing and standby; the icons for which glow amber, white or blue to indicate their current status. Below the front grille is a handy Wi-Fi signal strength indicator that lights up in three segments.

My only gripe concerns the placement of the buttons – the speaker’s back-sloping cabinet means you can’t see them unless you pick it up or peer over the top, which doesn’t help when you want to switch to Bluetooth from the comfort of the sofa. There’s no remote control, either. 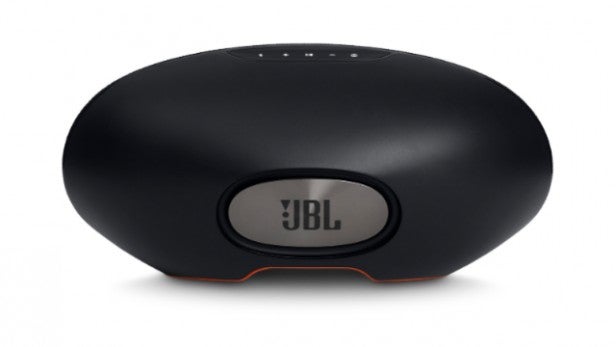 On the back is an exposed passive radiator that wobbles about when you poke it – a prime target for wandering juvenile fingers. Further down is a recess housing a 3.5mm mini-jack, a reset button and the power inlet. But on the wireless side Playlist offers dual-band Wi-Fi (2.4GHz and 5GHz with 802.11ac support) and Bluetooth 4.2, which allows guests to connect quickly without needing your Wi-Fi password.

The advantage of using Wi-Fi to stream music as opposed to Bluetooth is that it potentially offers better sound quality – including hi-res streaming up to 96kHz/24-bit – and doesn’t limit you to a set distance from the speaker.

Built-in Google Chromecast is Playlist’s main attraction, providing an easy way of streaming audio directly from compatible apps on your smartphone or tablet. At last count there were close to 300 compatible apps, among which are familiar names such as Spotify, Deezer, BBC iPlayer Radio, Google Play Music and Tidal.

The fact that you can only stream from Chromecast-compatible apps won’t please everyone, but it does mean that you’re not tied into a particular streaming ecosystem such as Sonos or MusicCast, for example.

Install Google Home and you can create a multiroom system with other Chromecast-compatible speakers.
JBL doesn’t offer its own DLNA/UPnP player, so you’ll need to rely on a third-party app such as BubbleUPnP to access music from PCs or NAS drives on your network. 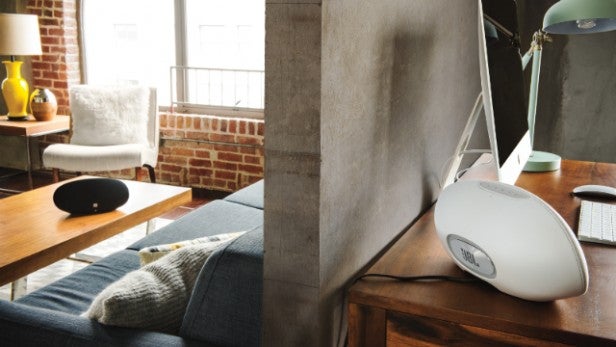 Playlist also supports the Spotify One Touch Play feature, which continues playing music you started on another device without having to log in again. Provided you’ve played music via Spotify Connect at least once to establish the path, just press the play button on top and the speaker will pick up where you left off.

In terms of speaker tech, Playlist uses two 2.25-inch woofers, augmented by a rear-mounted passive radiator, with a power output of 2 x 15W. Playlist’s compact size would have made it ideal for portable use but there’s no battery on board, which means it has to be tethered to a plug socket. A missed opportunity, perhaps. 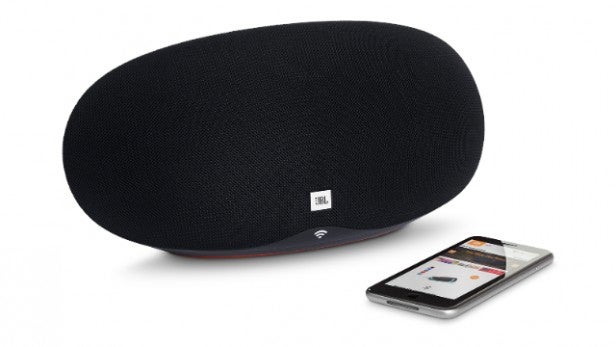 To connect Playlist to your router, simply install Google Home on a smartphone connected to the same Wi-Fi network and follow the instructions.

The process is mostly automatic. You’re supposed to hold down the play button for five seconds to instigate setup, but it had clocked the presence of Playlist before I even had the chance. After that, Google Home launches into the setup process, playing a test sound and transferring the Wi-Fi password from the phone to the speaker. To start streaming, tap the Cast icon within your chosen app and select Playlist as the speaker.

The JBL Playlist is a talented performer, delivering the sort of easy, well-balanced sound you can just kick back and enjoy without the need to constantly fiddle with the controls. There’s plenty of detail, vocals punch through the mix clearly, and well-controlled bass lends warmth without compromising clarity.

First up on Playlist’s playlist is a hi-res FLAC of Daft Punk’s ‘Lose Yourself To Dance’, which sounds great. Agile handling of the funk bassline provides a solid backbone, while the disco drums sound big and punchy. You can sense the radiator working overtime on the back, but even so, the low frequencies never flap or linger too long. Skip to ‘Doin’ It Right’ and the pulsating 808 kicks boast impressive depth. 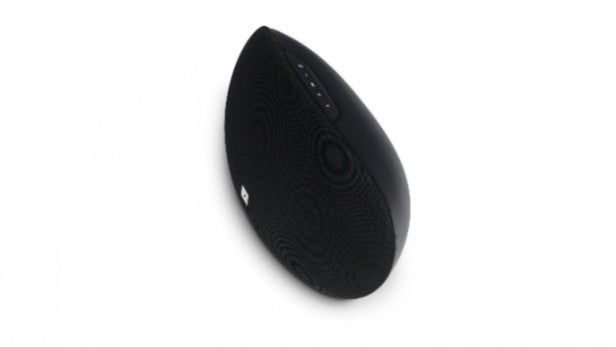 Thankfully, the JBL’s robust mid-range never allows instruments and vocals to become swamped by the beefy kicks and basslines. Pharrell’s vocals take centre stage, while guitars, vocoders and synths are easily identified. It’s open and expressive, skilfully conveying the different sounds and textures within each track. The stereo driver arrangement gives you a better sense of placement and imaging than similarly sized mono designs.

Playlist also handles high frequencies with an assured hand. There’s enough detail to make instruments sound like real instruments, while delicate hi-hat patterns and subtle percussion are nicely teased out. Even more pleasing is that it maintains this sense of composure and clarity as you push the volume higher. Playlist goes surprisingly loud for such a compact speaker, and while ‘room-filling’ is pushing it, there’s more than enough puff to satisfy. 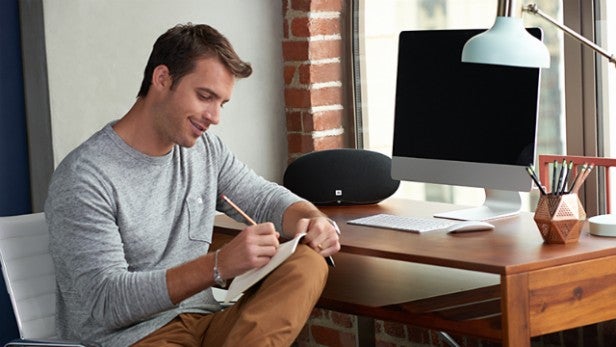 That said, the sound could do with more sparkle and bite. The top-end has been smoothed off in a way that won’t intrude on dinner party conversation, but when you need it to explode into life during the chorus of ‘Smells Like Teen Spirit’ or attack the crunching snares on ‘Halftime’ by Nas, it lacks the required drive to do so. This is great for long-term listening, but when it comes to excitement the JBL falls a little short.

In all other respects, however, Playlist is a terrific speaker with a warm and detailed sound that belies its modest price and dimensions. 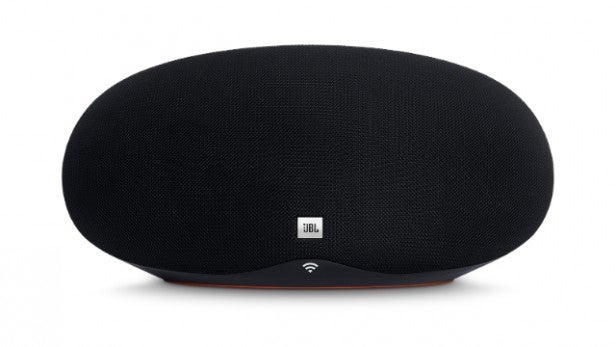 Should I buy the JBL Playlist?

With its attractive design, convenient Chromecast streaming and enticing sound quality, the JBL playlist is an absolute bargain at this price. Despite its size, it generates a loud beefy sound with plenty of bass and detail – not to mention a level of nuance you don’t usually get from similarly sized/priced speakers.

Toothless high frequencies and lack of rechargeable battery take the shine off somewhat, while the use of Chromecast apps and Google Home over a bespoke streaming ecosystem won’t appeal to everyone. But, otherwise, JBL’s cute compact speaker certainly deserves a place on your playlist.

Impressive sound quality, chic design and effortless Chromecast streaming make JBL’s compact speaker a terrific buy at this price – but more bite and a rechargeable battery would make it even better.