Jays may not be one of the best-known earphones manufacturers in the UK, but it has come up with some of the best-performing sets around, like the bloomin’ marvellous q-JAYS. While they sit at the very top of Jays’s range, the a-JAYS One are right down the bottom. They’re available for under £20, but they don’t sound like cheapo earphones.

To date, Jays hasn’t been entirely successful in breaking into the mass market audience here in the UK, but it has always had a knack for interesting design. The budget a-JAYS One are no different. The bud design is petite and sleek, but it’s the cable style that sticks out a mile here. 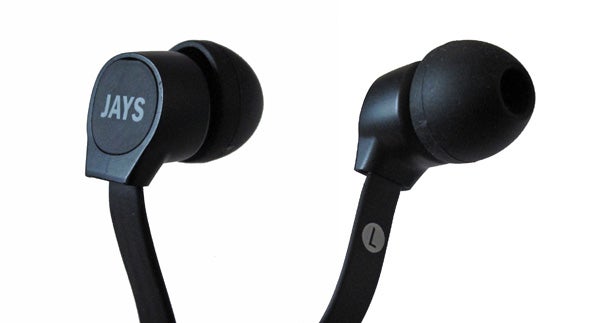 It’s flat, like tagliatelle instead of the spaghetti we’re used to. Jays claims it’ll stop cable tangling. In our experience with the earphones, it did reduce tangling, but kinks-up much more than a standard cable. No cable type – be it braided, rubber or a flattie – is entirely immune to tangling though, so the best method is to avoid dumping your earphones into a cluttered pocket for too long.

While commendably sturdy, the cable does add a little weight to the a-Jays. The earbuds themselves are very light though, made from good old plastic like the vast majority of earphones at this price. With apertures slightly smaller than the standard set down by Sennheiser’s CX-series headphones, they shouldn’t pose a comfort issue unless you have truly tiny ear canals.

Jays includes a generous five pair of rubber tips with the earphones, ranging from piddly little XXS ones to those in-line with the largest you’ll get with a standard IEM set. Although there are no doubles of the tips, this is a wider range than is included with most earphones. We found them slightly less easy to attain a seal with compared to tips from Ultimate Ears’s budget earphones, which also fit the a-Jays fairly well.

The 1.1m cable ends in a straight 3.5mm jack. We tend to favour right-angle jacks for their improved ability to handle everyday roughhousing, but it’s primarily a personal preference.

Models further up the a-JAYS range, now home to four models, include extras like airplane adaptors and signal splitters. This bottom-end model is all about the basics though – decent sound, decent design and few frills. If you need these accessories, the next model up is available for around £10 more. The top a-JAYS Four model sells for £50 and features a handsfree kit plus claimed improved high-end frequency response. We should be getting them in soon to test these claims. But for now, do these cheapies hold up where it matters most?

Often, when it comes to budget earphones, success is not dependent on exactly what’s missing from the sound, but how well what is there works together. This is where the Jays a-JAYS One triumph, boasting an unusually cohesive signature.

What they can do well is bass. There’s plenty of clout and it’s not too flabby. Bass control is somewhat limited, but it’s slightly better than the otherwise class-leading Sennheiser CX 300. 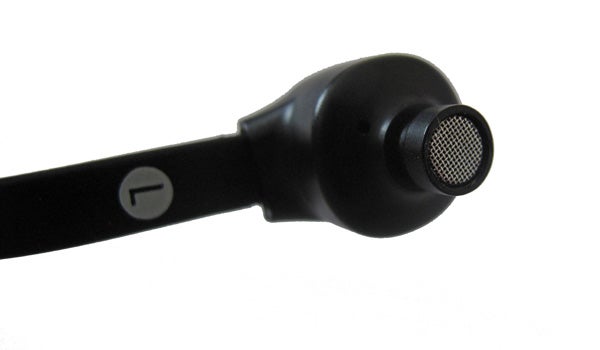 The treble is smooth and free of harshness and sibilance, but this is in part because the top-end seems to roll off fairly early. Detail and resolution is surprisingly good at this level, but overall treble presence is much greater in something like the Ultimate Ears 200. This can be EQ’d-in without adding much harshness, leading us to believe that the higher a-JAYSs’ models improved treble response may be down to tuning rather than an entirely different driver.

The a-JAYS One’s frequency response tops out at an unimpressive 18,000Hz, but the slightly more expensive a-JAYS Two reaches to 20,000Hz and the Three 22,000Hz. We’re not usually ones for judging sound by specs, but could Jays be sacrificing the frequency curve here to give the product line a more convincing curve of its own? 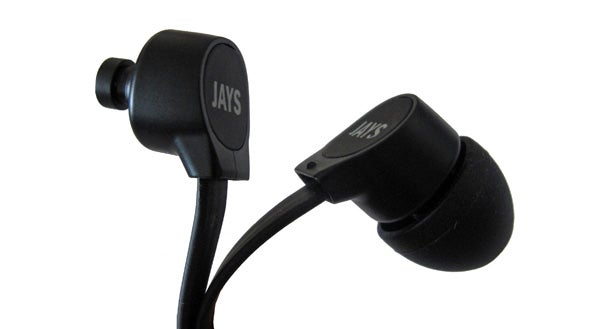 It’s no deal-breaker though, because the timid treble doesn’t leave the a-Jays One sounding muddy or veiled. The Sennheiser CX 300 offer a wider stereo image and greater dynamics, but also have that typical boxy Sennheiser sound and a slightly less refined-sounding treble. These two sets of earphones are comparable performers, and that’s high praise for the Jays a-JAYS. They’re warm, involving and well-balanced for a cheap set. You may prefer them to the “reference model” Sennheiser CX 300 if you find those buds a little too boisterous.

Available for under £20, the Jays a-JAYS One are stonking value, and are some of the best sub-£35 earphones you can buy. If you have a player that can ratchet-up the treble a bit, all the better.

The Jays a-JAYS offer superb value – bringing a warm, involving and thoroughly well-controlled sound, plus decent styling to the budget sector. They benefit from a treble boost, but even without it they produce a thoroughly pleasurable sound.