The Jabra Go 6470 is very different to your average Bluetooth headset. For starters it’s designed to be used both around the office with a landline or computer telephony application and on the go with your mobile. But perhaps the most obvious difference is that it comes with a dock that gives you touchscreen control over the headset making both set up and call handling easier. 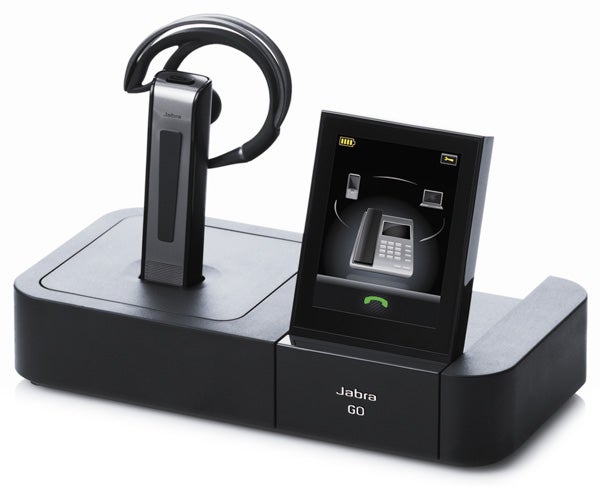 Open the box and you’re met with an initially bewildering array of parts. These include the headset, the base station that has a flip-up touchscreen, a mini-USB charging station and two power supplies (one for the base station and one for the mini charger). And as well as the traditional ear hook there’s also an office style headset holder that the headset can be clicked into if you want to rock that call centre agent look. You’ll even find a USB cable for connecting the dock to your computer and a telephone lead for connecting it up to your landline telephone.


The base station is perhaps the most interesting and unique aspect of the whole set up. Rather than acting merely as a charging dock, it actually serves as the hub of the system handling the connection between the headset and your computer and landline. Bluetooth connections, however, are handled directly by the headset, so you don’t need to be within range of the base station to use it with your mobile. 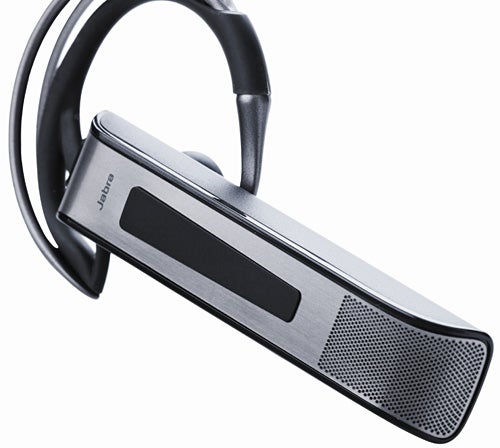 The base station is around half the size of an old VHS cassette and is finished in matt black plastic apart from the frame around the Jabra Go logo, which has a glossy look. The top right-hand side of the station is home to the flip-up touchscreen. At 2.5in the screen is around the same size as a mobile phone display and with its QVGA resolution the icons and text look reasonably crisp and sharp. It’s a resistive rather than capacitive screen, but is quite sensitive to touch input so this really isn’t an issue.


The screen has a huge impact on the usability of the product. For example, as the headset can be used with a landline, PC software or a mobile phone you’d expect the set-up process to be long and complicated. But although it certainly does take a little while to configure the headset to work with all three, it’s actually quite a painless process largely because an onscreen setup wizard displayed on the touchscreen guides you through the whole process on a step by step basis.


Once set up you’ll find that the touchscreen also makes call control a breeze. The homescreen shows the three active connections with icons for a computer, mobile phone and standard telephone arranged in a circle. To cycle between them you simple touch right or left on the display. You can also use the touchscreen to pick up an incoming call or drop a call and to place one caller on hold while you answer a call on a different device.

Naturally, the headset also has its own call controls. On the rear, you’ll find the main call handling button that lets you pick up or drop calls, while the outside edge acts as a touch slider to control the volume level. As you would expect of a premium headset, the Jabra Go 6470 has a twin microphone arrangement that works in tandem with its Noise Blackout system to reduce background noise when you’re on a call.


In fact the headset’s call quality is absolutely first-rate. Not only is the noise cancellation excellent, but Jabra’s wideband audio technology also works wonders. It broadens the frequency range of the headset to deliver deeper more natural sounding audio. This worked exceptionally well not only on mobile and landlines calls, but also Skype calls from a PC. 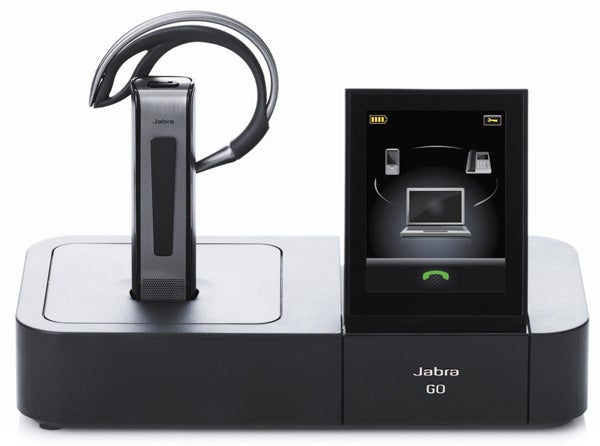 The headset battery life is also very impressive. Jabra quotes a talk-time of six hours and a standby time of 100 hours. In our experience, this proved to be almost accurate as we got about five and a half hours of talk-time before it needed a recharge. That should be easily enough to do a whole day’s worth of calls even in the busiest of offices.


We only have a couple of gripes with the Jabra Go 6470. The first is that the headset is rather large and slightly heavy by the standards of today’s mobile headsets. As a result, it looks a bit odd and old fashioned when you’re wearing it with the standard earhook. The earhook was also sometimes a little uncomfortable to wear and despite trying all three of the supplied ear gels and adjusting the earhook size, we never got it to fit as comfortably as some of the smaller and lighter Bluetooth headsets we’ve used. However, when the headset is snapped into the headband-style earpiece holder it is very comfortable to wear.


The other issue is that it can’t be used to pick up a landline call unless you purchase the Remote Handset Lifter accessory, which costs around £20. Without the handset lifter, you have to physically pick up the handset of your landline phone to open or drop a call. Really, we think Jabra should have included this accessory in the pack, given the already quite high asking price.


The Jabra Go is and impressive product. The base station works extremely well and the touchscreen makes call handling a breeze. Its call quality is also first-rate. However, the headset is little bit on the large side and so can look a tad old fashioned when you’re wearing it and we also think Jabra could have included the Remote Handset Lifter accessory in the pack. Nevertheless, this is still a great system for those who spend a lot of time on the phone during their working day.