Jabra has recently tried out some fancy designs for its Bluetooth headsets including the radical Stone model that did away with the boom mic. However, with the Arrow the company has taken a more traditional approach, as the headset looks quite similar to the company’s previous models like the JX10. However, the big difference with the Arrow is that it includes both auto volume technology alongside its noise cancelling features. The question is, though, just how much of a different does this fancy circuitry make? 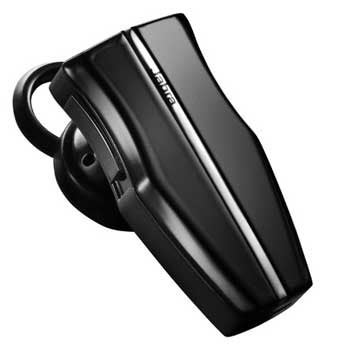 Most headsets arrive in pretty non-descript boxes, but Jabra has gone over board on the Arrow’s packaging as the headset is presented in what’s best described as a clear Perspex display case a. It may be a tad environmentally unfriendly, but there’s no denying that it looks pretty cool. Inside the box along with the headset you’ll find a wall charger and an in-car power adaptor. The power lead on the wall charger is ridiculous short at only 14cm long, so you can’t for example, sit the ear piece on a desk while it’s charging. Instead it tends to just dangle it from the end of the power lead, which is a tad annoying, and looks quite inelegant.


The car charger, on the other hand, is a bit better thought out. It’s a two piece design – the main part that plugs into your car’s power socket/cigarette lighter has a standard USB socket and into this you plug a pivoting curved USB to micro USB adaptor. Not only does this charge the headset (the Arrow has a micro USB port on its rear), but it also acts as a sort of in-car holder, although how useful this will be will depends on exactly where you car’s power point is located.


Before you use the Arrow you first need to fully charge it, which takes around two hours. From a full charge Jabra says that it’s good for around four and a half hours of talk time or around eight days on stand by and in our experience these figures proved about right. The talk time isn’t all that impressive, but it is roughly on a par with other similarly sized headsets equipped with noise cancelling features.

Naturally, comfort is one of the most important things with any headset and thankfully Jabra has comfortably hit the target in this department, even if it hasn’t quite got the bullseye. The headset is not only light at 9g, but also quite small in stature measuring a mere 39 x 18 x 24mm – so it doesn’t feel like you’ve got a large piece of gothic jewellery hanging of your lughole when you’re wearing it.


Jabra supplies two ear hooks in the box, along with three different sized ear gels. The default setup for the headset is to use it with an earhook that keeps it snug on your ear, but the extra ear gels include a backloop that lets you use it without a hook if you prefer, as the loop at the back of the gel helps hold it in place. However, we found that the headset didn’t feel quite as stable using just the gels as it did when the hook was attached, but this is really down to personal preference.

The Arrow is kitted out with the bare minimum of controls. There’s just a multifunctional call button at the top, and a sliding switch to turn the headset on and off on the bottom. Unlike most other headset we’ve used the Arrow has no volume control at all. Instead it sets the volume for you automatically, although you can manually adjust this to a degree by using your phone’s volume controls if you really need to. 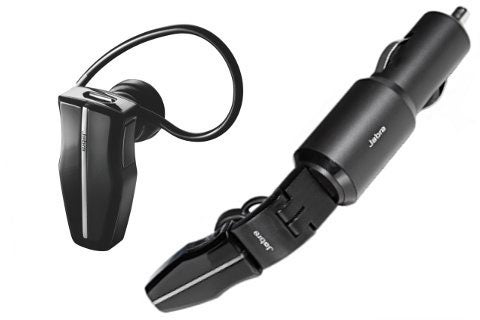 Pairing the headset with a phone couldn’t be more straightforward as the headset automatically goes into pairing mode the first time you turn it on. Alternatively, you can manually enter pairing mode by pressing and holding the main button for five seconds. Then it’s simply a matter of doing a search for it on your phone and entering the standard 0000 passcode.


As the headset only has a single function button all the main controls are activated via different lengths of pushes or taps on the button. For example, to accept a call you tap it once, to reject a call or activate voice dialling you press and hold it down for a moment and to redial the last dialled number you tap the button twice in quick succession. You can also check the battery level by tapping once on the button when the headset is in idle mode. It will then flash the LED hidden behind the Jabra logo to give you a rough indication of battery life. One flash means it nearly out of charge, while three flashes means it’s full charged. The Arrow’s reliance on a single button for most functions makes it a bit tricky to use to begin with as there are quite a few button pushing combinations to get used to, but after a while you do get the hang of it. 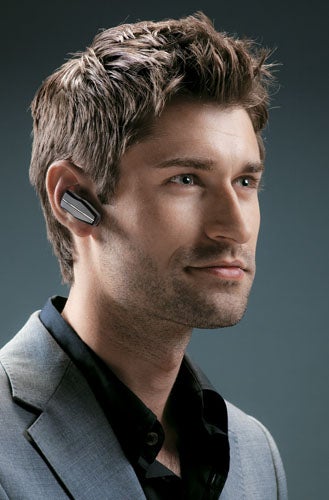 When it comes to call performance the Arrow is a bit of a mixed bag. The auto volume control works reasonably well in most day to day environments such as a busy street or in a coffee shop. However, if you find yourself in a particular noisy place, like a bar that’s pumping out loud music, we found we had to reach for the volume control on our handset as the headset simply wouldn’t automatically adjust to a level loud enough. Nevertheless callers do sound fantastically crisp and clear through the ear piece and when you do pump up the volume it is easily loud enough to handle even the most extreme environments.


However, the noise cancelling technology isn’t as impressive as it could be. Jabra says that it’s been tweaked to work best when used in a car and certainly it does work extremely well in this environment. However, it seems liked the noise cancelling algorithm has been tweaked to be too specific as it doesn’t work any where near as well in other situations such as busier cafes and pubs as those we called under these circumstances reported that it was hard to hear us over the background din.


We like the Arrow’s s small and light design and the automatic volume control feature, although not perfect, does work well under most circumstances. However, it’s not the easiest headset to use, the battery life is so-so and its noise cancelling doesn’t work all that well outside of a car environment.