It Takes Two excels in so many ways, not only as a competent and engaging co-op platformer, but also as an endearing and thoughtful tale about the realities of marriage, parenting and what it takes to sustain a relationship. Outside of one scene that feels tonally conflicted with the rest of the game, and some occasional dips in the quality of voice acting, It Takes Two is a triumph that should not be missed.

Hazelight Studios, the developer behind the co-op-focused A Way Out, is back with another multiplayer adventure in the form of It Takes Two.

As much as it pains me to say, you can pretty much count on one hand the number of fully fledged co-op games that have come out in the past few years. But just like Brothers: A Tale of Two Sons and A Way Out before it, Hazelight’s latest game indulges in the vast possibilities of co-op gameplay.

However, a narrative unlike any other game I can recall separates It Takes Two from those previous games, making this a truly unique co-op experience that I thoroughly recommend.

It Takes Two features two main leads: May and Cody. As a married couple with several years and one child under their belts, the pair have unfortunately drifted apart and can no longer be in each other’s presence without throwing accusations. 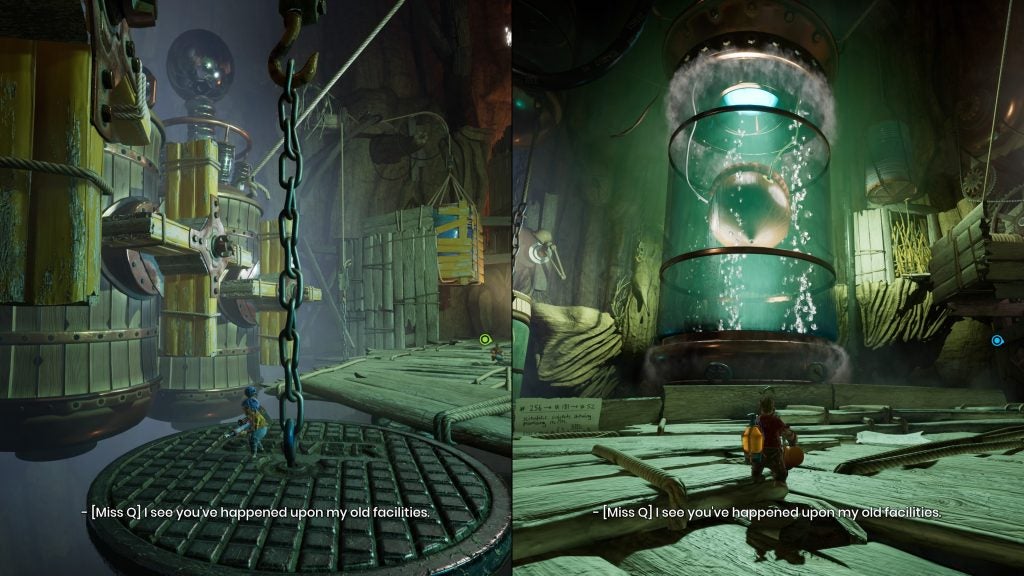 Their daughter, Rose, has almost run out of ideas over how to keep her parents together, and in a last ditch attempt, she consults Dr Hakim’s mysterious tome, the Book of Love. The tears of Rose’s despair, in conjunction with a well-timed wish upon two dolls that look suspiciously like her parents, leads to May and Cody leaving their human bodies and awaking in their respective dolls.

Utterly bewildered by their new cartoonish selves, it isn’t long before May and Cody are accosted by an anthropomorphic Dr Hakim, who informs them that they must fix their relationship by working together. However, as you might expect from a couple on the verge of divorce, the pair aren’t particularly interested in relationship advice and instead have their sights set on reaching Rose.

It’s a brief but effective setup, particularly since games rarely tackle the topic of divorce and family breakdown. I won’t spoil the major story beats here, but the game does a great job of delving into the complexities of a modern relationship.

Despite the rather outlandish scenario that May and Cody find themselves in, the attention to detail in how the two interact with each other is anything but. The narrative progresses at a steady pace, with the re-emerging bond between the pair staying true to who they are and the hardships they’ve faced. It’s not until the final quarter of It Takes Two that the dialogue between Cody and May becomes positive, avoiding the ‘quick fix’ resolution so often seen in similar stories. 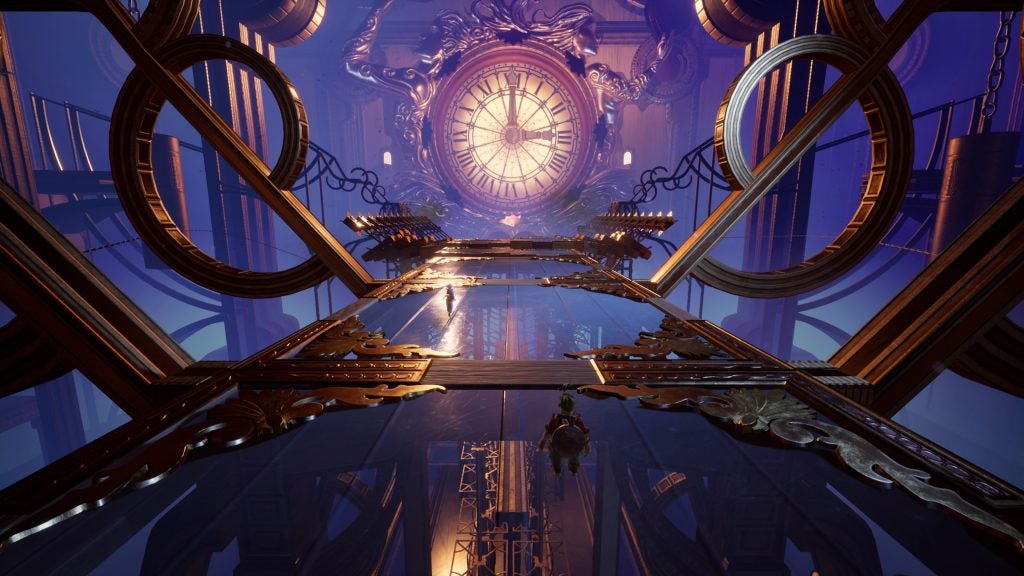 Credit is due to the stellar voice acting that sells the history of these two characters, and their innermost thoughts and feelings in the game’s more vulnerable moments. The quality isn’t quite as consistent with Rose’s dialogue, however, with the game’s main focus placed elsewhere.

The world occupied by a miniature May and Cody feels rather Toy Story-esque at first, as you view the world through a doll’s eyes with a twisted perception of reality.

The level variety in It Takes Two is really something, and I’d argue that it gives Super Mario Odyssey a run for its money, taking you to various locations from an area in outer space comprised of various bedroom items, to an expansive ski resort contained within a snow globe (complete with views of the kitchen leering from outside the glass).

At its heart, It Takes Two is a traditional platformer, replete with double jumps, rolling and crawling, and while this certainly takes up the majority of the playtime, the game constantly reinvents itself with each new stage. 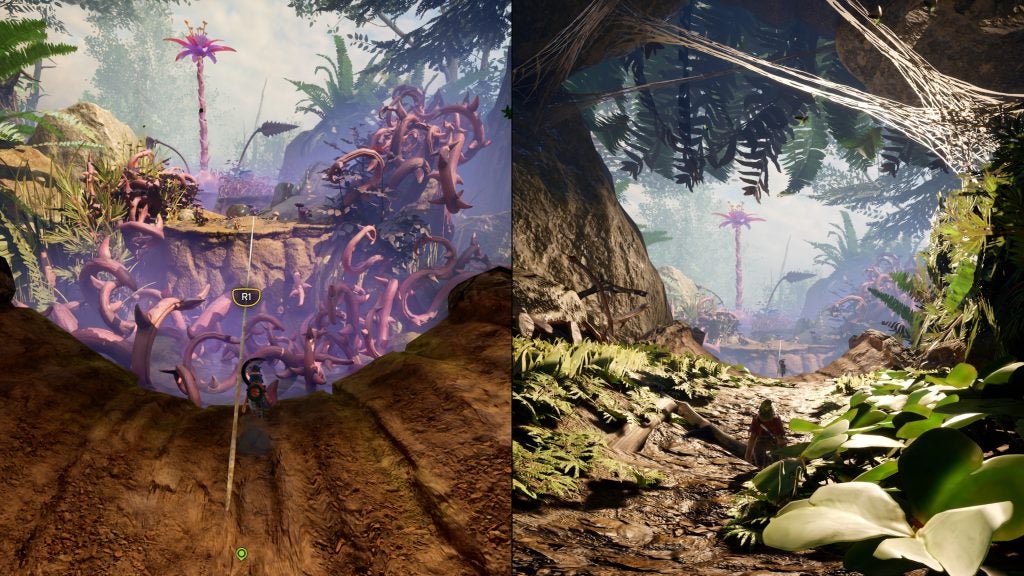 For instance, when taking on an army of wasps, Cody and May are equipped with a tree-sap gun and bazooka respectively, the former of which holds enemies in place while the latter takes them out, requiring both players to be in sync. In a later level, Cody is given the ability to grow as large as a giant, or as small as an ant, while May is equipped with gravity boots to scale the walls and explore a new means of traversal.

Weapons and powers are constantly swapped throughout the game so they never feel stale, keeping the whole affair engaging. The variety doesn’t stop there either: It Takes Two delves into plenty of other genres as and when it pleases, and to great effect.

For example, in their quest to murder Rose’s favourite toy, Cutie the Elephant Queen, May and Cody become imprisoned by the Queen’s guard, resulting in a dungeon escape section. Instead of playing it safe, Hazelight uses the opportunity to inject a small portion of top-down Diablo-style gameplay into the mix.

It’s astonishing how well It Takes Two shifts gears in this moment, not just in paying a respectable homage to the hack-and-slash genre, but also by being fun in its own right. I’ve never played a game that felt so jam-packed full of ideas, and it’s clear that Hazelight must have had a ton of fun in creating these one-off segments. 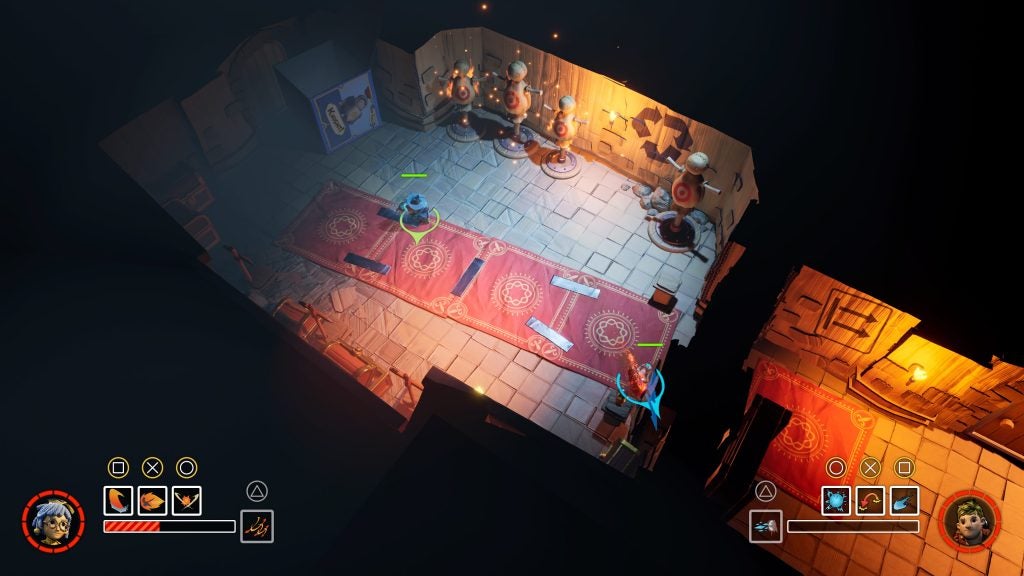 There’s also a surprising number of mini games that can be found throughout the adventure. They’re great little distractions, oh which you can return to at any time from the main menu, giving the game a bit more longevity after the credits roll.

It Takes Two walks the fine line of being challenging, without ever feeling too difficult. Checkpoints appear quite frequently, and during the boss fights (of which there are many), one character dying doesn’t immediately result in a game-over screen, allowing the temporarily deceased to refill their health bar by mashing a button prompt. There were several boss fights that almost had my fiancée and I stumped, but that feature saved us from replicating one of Cody and May’s arguments.

During the entire playthrough of It Takes Two, there was only one major thorn in the game’s crown, and it has to do with the aforementioned take-down of Rose’s favourite toy – Cutie. Early in the story, May and Cody become convinced that the only way to revert their current circumstance is to make Rose cry again, which sets them on a warpath to take down the sweet and cuddly Cutie at all costs.

What ensues is a scene that feels rather difficult to watch, where the pair are determined to throw the Queen off a castle roof, resulting in her losing a limb and one appendage along the way. The whole thing feels tonally inconsistent with the rest of the game, and the worst part is that the previous segment – where May and Cody go up against Rose’s old favourite toy – does a better job of portraying the selfishness of the pair and without any moments of cruelty.

It Takes Two is one of the best co-op games I’ve ever experienced, and if you’re on the lookout for a great platforming adventure that you can play with a friend or spouse, then I can’t recommend it enough.

Sweetening the deal even further is the fact that only one person needs to own the game for two people to play it online. You can’t ask for anything more than that.

You should buy It Takes Two if…

It Takes Two is built around the co-op experience and so, aside from Hazelight Studios’ previous titles, there really isn’t anything like it that gives as much credence to the idea of two players working together to achieve a unified goal.

The industry isn’t flooded with platforming games like it once was, so any opportunity to indulge is worth shouting about – and It Takes Two certainly brings the action. With a wide variety of levels, the gameplay never feels stale, and you’ll be hooked the whole way through.

The topic of divorce and family breakdown is something rarely (if ever) approached by video games, and yet it’s given its due here with a great deal of care and attention, so that the complexities of the subject are never overlooked for the sake of an easy resolution.

You shouldn’t buy It Takes Two if…

Again, it seems like a ridiculous point to make, but the assassination of Rose’s favourite toy is a hard scene to watch, especially if you’re part of the generation who grew up watching Toy Story. It’s one small thorn in an otherwise gleaming crown.