Once again, I’m beginning to wonder whether there’s something in iRiver’s water. While most of the smaller PMP manufacturers attack Apple’s domination of the market through a combination of better audio quality, video playback, file format support and value, iRiver’s recent PMPs have seen it poking at the Cupertino giant’s strongest area: style.


Last year’s Spinn was a particularly innovative effort, positioned somewhere between the iPod nano and IPod touch, combining slick, stripped-back looks with a cool Flash-based interface and a mix of touchscreen and click-wheel controls. It wasn’t perfect by any means, but it was easily one of the most attractive players I’ve seen in the last year. Now iRiver returns with the P7, and if anything it’s even more a statement. A flat, tablet-style PMP in powder-coated aluminium and off-white plastic, it’s about as cool and minimalist as such things get. And that’s before you even switch this beauty on… 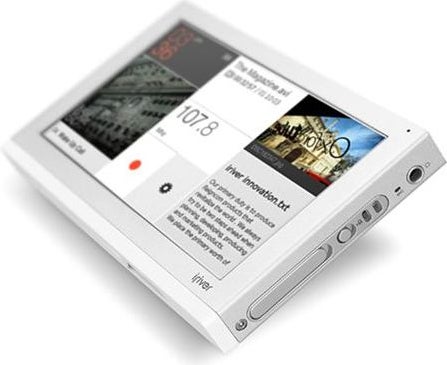 Admittedly, it’s not the most compact or lightweight PMP. At 112mm x 73mm and nearly 14mm thick, it’s nearly as big as the porky Archos 5, and a good deal larger than, say, the Samsung YP-P3. At 175g it’s also not a player you’ll forget when it’s sitting in your pocket. In fact, I suspect I’ve carried smaller and lighter tape-based Walkmans around in my day.


But then compensation comes, as with other larger PMPs, in the form of the screen. It’s a 4.3in TFT effort with the same 480 x 272 pixel resolution as the YP-P3, and though it’s limited to 260,000 colours and could do with a stronger contrast and some extra brightness, the combination of size and clarity works well. 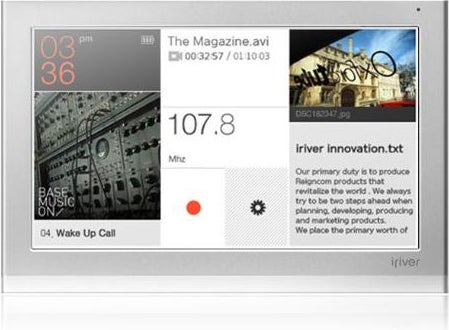 It’s not the quality of the screen that impresses, however, as much as iRiver’s specially developed user interface. Again based on Flash, it’s designed – I’m told – to mimic a glossy magazine layout, with eight different panels laid out across the surface. Top-left we have a digital clock, and below that a panel for the currently selected music track, complete with album art if available. In the centre we get, from top to bottom, a panel showing the current video selection, then one for the built-in FM radio, then two buttons for voice recording and overall settings.


Finally, the right hand side brings us the current photo image and a panel for text. Click on any one of these, and you go straight to the relevant function. These sub-pages are also well designed, providing – in music playback, for example – access to transport controls, EQ settings, play modes and the file browser at a touch of the screen, but without looking cluttered or confusing. The user-interface is one area where so many smaller Korean manufacturers seem to struggle, but iRiver seems to be taking huge strides in the right direction.

That said, it hasn’t reached utopia quite yet. The biggest issue is the touchscreen itself. Unfortunately, it’s not all that responsive to finger pressure, leaving you stuck prodding it with the elegant stainless steel stylus provided. Even this isn’t consistently effective, and – bizarrely – there’s nowhere to stow it inside the casing. There are times, as well, when the movement between screens proves a little languorous; not enough to irritate, but enough to make you miss the snappy response of other PMPs with more conventional controls – or the good old iPod touch, for that matter.


Luckily, the P7 isn’t completely reliant on its interface. Physical controls, as you might expect, are minimal, with just an on button, a hold slider, up and down volume buttons and a menu button. The proprietary USB connection can be found beneath a sliding panel on the base. However, the P7 does sport two features I hadn’t honestly expected, namely a built-in mono speaker (quiet and tinny, but no surprises there) and a micro SD memory card slot, providing you with up to 4GB of extra capacity should you need it. And you might, if only to take more advantage of the P7’s video playback capabilities. 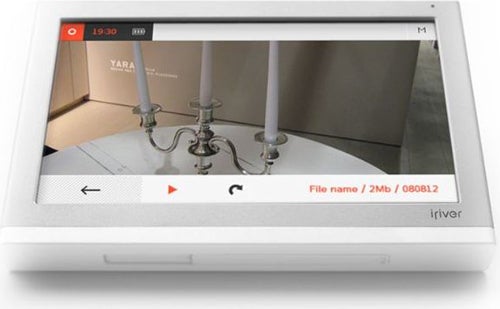 The player theoretically supports files in a range of containers, including WMV, AVI, MP4 and FLV, with codec support for H.264, MPEG-2, MPEG-4 and XviD. In tests, format support was reasonably robust, though not up to the ‘play anything’ standards of Cowon’s plucky little O2 PMP. A couple of MP4 videos suffered from blocky artefacts and distorted audio, while an XviD rip of Iron Man suffered from a noticeable lag between video and soundtrack. A couple of video files also suffered from slightly jerky motion during scenes with a lot of movement. Overall, however, video playback is good, and one benefit of having a larger than normal screen is that this is a PMP you could potentially watch a whole movie on. Even with Iron Man’s sound sync problems, I very nearly did. 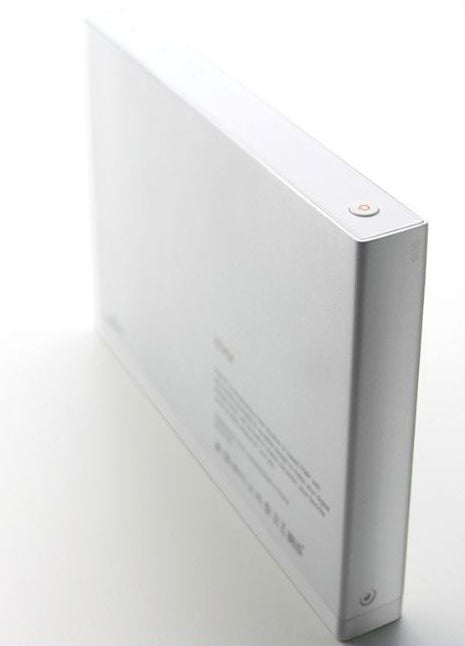 After the Spinn, I had high expectations for the P7 in terms of audio output, and I haven’t been hugely disappointed. I’m coming to associate iRiver’s sound with clarity and balance, and the P7 delivers a strong, clean sound that works well through a decent pair of headphones. Needless to say, the bundled earbuds don’t qualify; the bass is too weak and the mid-range hideously cluttered. Switch to even budget ‘phones, however – I used a pair of Sennheiser CX-300 IIs – and these weaknesses disappear, the bottom end kicking in nicely and the mid-range improving in detail, with a nice crisp, sparkle at the top.


The deep bass notes, thumping drums and samples of Bat for Lashes’ Sleep Alone come through nicely, delivering a rich, attention-grabbing sound and clear, expressive vocals. If your tastes run more to hard rock or metal, then you might want a player with a little more mid-range oomph, but a quick run of Mastodon’s Divinations from Crack the Skye proved that the P7 is no slouch when it comes to thick riffs, rolling drum fills and oodles of widdly guitar. You might want to fiddle the EQ a bit for rock, but be wary. The presets aren’t particularly subtle, and the SRS WoW effect adds an obviously processed tone to the output.

The good news is that the P7 doesn’t expose any obvious weaknesses when paired with higher-end headphones like the Grado SR125is. The clarity of sound suits acoustic music well, and it’s also a good match for classical, coping well with the swelling orchestration and sudden shifts of Ralph Vaughan Williams’ The Lark Ascending and the sturm und drang of Wagner’s Gotterdammerung.


FLAC rips of Talk Talk’s Spirit of Eden and The Smashing Pumpkin’s Rotten Apples compilation proved that the P7 can handle complex, thickly-layered tracks in all their uncompressed beauty. Listening to Talk Talk’s Eden is a hair-raising experience, with the iRiver delivering the carefully crafted tracks of guitars, drums, bass and swirling organ in a way that enables you to enjoy every breathtaking detail. 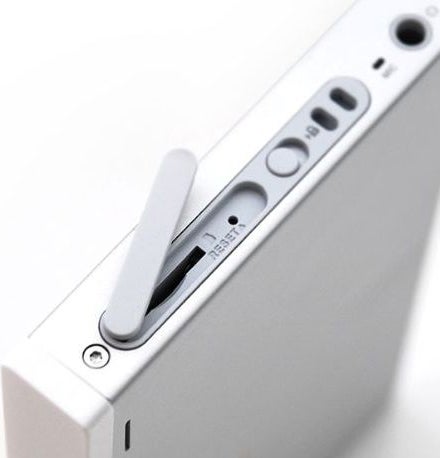 I’d only make two points against the player. First, there are times when all that clarity seems to come at the expense of body, though you could never call the output thin. Secondly, to drive a pair of full-sized earphones and get a decent sound you’ll need to push the volume up into the top third of its range, which is guaranteed to have a slight but negative effect on the tone. Overall, though, this is a fine sounding PMP, if not one of the absolute best out there.


You could argue that it’s not the richest PMP in terms of functions. The voice recorder works perfectly well, the radio offers reasonable reception and an easy-to-use auto-search, and reading text documents is easier on the 4.3in TFT than it is on smaller screens. But where are the games? The Flash widgets? The Web browser and the rest? The P7 hasn’t got them, but then I’d rather have a PMP that gave me easy access to my media than one that came with a bunch of extraneous, useless bells and whistles that I won’t actually use on a day to day basis. The P7 does just that. 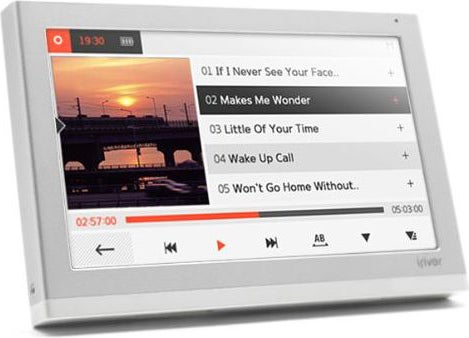 This is a good PMP, and I like the styling and the interface a lot. All the same, it’s one that still has room for improvement. The sound is certainly premier division, but not quite fighting for supremacy at the top of the table. I’d also like to see video playback free from wobbles, and the interface running with a more responsive touchscreen and a little extra snap.


Most of all, I’d be happier recommending the P7 were the price that little bit lower. £169 for 8GB isn’t extortionate, but it’s more than you’d pay for a similarly equipped iPod touch, and a lot more than you’d pay for Samsung’s excellent YP-P3 or Sony’s brilliant S-639F. The identically-priced Cowon S9, meanwhile, might have a smaller screen and a much less friendly UI, but that screen is brighter and clearer and the sound is top notch too. Given these things I’m not going to dish out awards to iRiver, but if its ideas keep flowing in the same direction, it can only be a matter of time before I do.

A fine PMP with good sound and an innovative, very usable UI. If iRiver could just lower the price and iron out a few niggles, it would have a real contender on its hands.