It’s sometimes the way in the world of technology, too. Slim and sleek design often masks a neglect of basic features – the Meizu MiniPlayer SL 8GB I reviewed in these pages looked great but sadly failed to match those looks with sound quality. It was brilliantly easy to use too, which made the poor sound all the more frustrating.


The latest player from iRiver – the 8GB E100 – comes from the opposite school of thought, putting practicality before looks. It’s certainly not the greatest piece of hardware design I’ve ever come across, clad entirely in plain black plastic. Click over to the iRiver website and you’ll see all sorts of sexy stock shots of the player, but don’t let that fool you; apart from the fact that you can also buy it in a range of colours, there’s nothing at all here that provides any kind of visual highlight. There’s no aluminium anywhere, no-soft touch surfaces, no gloss finish or subtle sparkle; in fact the standard plastics don’t even feel that nice in the hand. 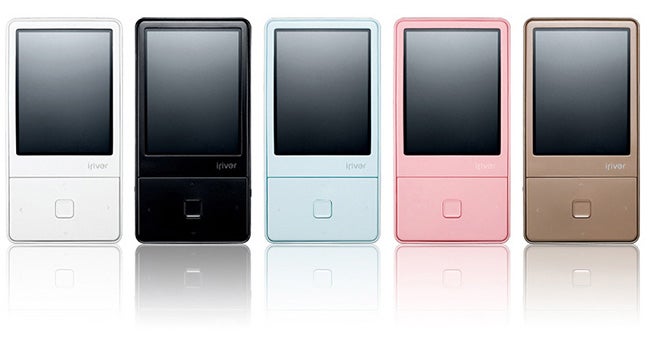 The five-way directional button panel occupies an unnecessarily large proportion of the front panel making the E100 quite a chunky player, too. Even though it has the same-sized screen as the Meizu – a 2.4in 240 x 320 TFT – it feels much bigger. It’s certainly much, much thicker at around 14mm (compared to the Meizu’s 10mm) and that button panel adds a good inch to the length of the player.


Flip the E100 over and you find the reason for that extra bulk. On the rear is a pair of speakers, and as with Creative’s latest range of pocket Shuffle-style music players, if you unplug your headphones the E100 produces noise. I say noise, because these speakers are barely worthy of the name. They’re very quiet and sound horrible. Even the speaker on the much smaller Creative Zen Stone players is better than this.

Continuing the underwhelming theme is that screen, which isn’t a patch on the Apple nano’s smaller 2in, or the larger screen on the Sony NWZ-A829. Though videos play back at a smooth 30fps it seems darker and lacks the fullness of colour that those devices have. The usability of the device isn’t that great either. It’s not that the E100 is complicated to operate – far from it – it’s just that it doesn’t feel that responsive. Click one of the buttons on the front and there’s a slight delay before the player responds. Try to scroll quickly down a list of tracks and it seems recalcitrant, sluggishly stuttering down, one track at a time – a far cry from the lightning quick track navigation of the Meizu MiniPlayer SL and Apple’s iPod nano. 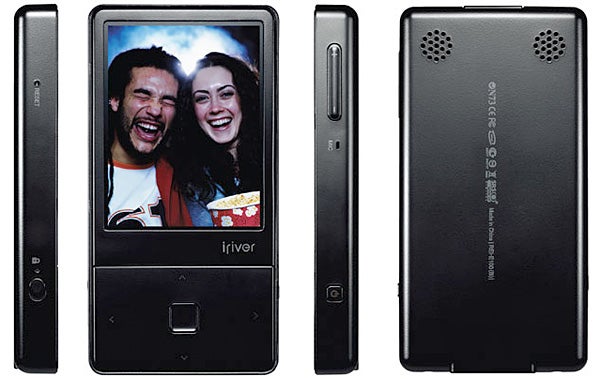 Fortunately, the E100 is pretty well endowed in other areas. Its music file format support is sound: on top of the usual WMA and MP3 support, you get support for the lossless FLAC format and Ogg as well. The device can be operated in MTP or mass storage mode, so you can drag music onto it as well as enjoying paid-for WMA files. The player sports a strong FM tuner, a 3.5mm line-in socket as well as an output for external microphone attachment, there’s built-in mic for dictaphone-style recording and, finally, a microSD card slot for expanding the already-capacious 8GB of on-board memory. 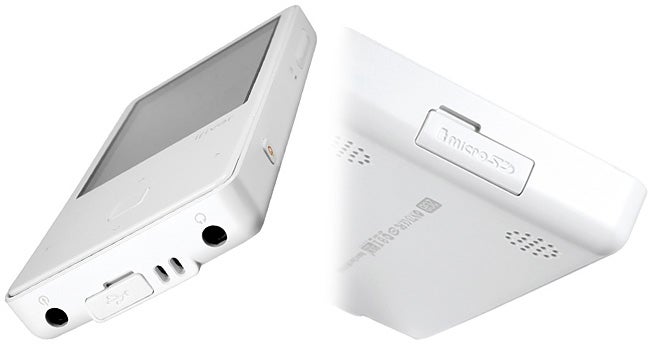 Video file support seems pretty good too, with MPEG4, WMV 9 and AVI formats all supported. As with most pocket media players, however, you’ll still find yourself having to transcode most clips you want to transfer. I dropped a number of standard definition MP4 and WMV files into the player from my collection of trailers and edited home movies without converting them first and it played none of them. Iriver does supply a pretty decent conversion tool for this purpose, however, for those who have the patience.

At least sound quality is up to iRiver’s usual high standards. I hooked up my reference headphones – a pair of Grado SR325is – and kicked off some listening tests with a blast of Metallica’s ”Sad But True” and found the E100 capable of a clean, yet powerful sound similar to that achieved by Creative’s Zen. It’s immediately clear it’s a cut above the Meizu MiniPlayer SL.

The bassline isn’t quite as juicy and warm as it is with Apple’s accomplished nano, but there’s a little more sense of detail, space and airiness to the music. And when you switch to something more acoustic, such as Newton Faulkner’s ”Handbuilt By Robots”, that quality is emphasised: the twanging strings of Faulkner’s acoustic guitar have realistic metallic bite and clarity that isn’t quite there on the nano. 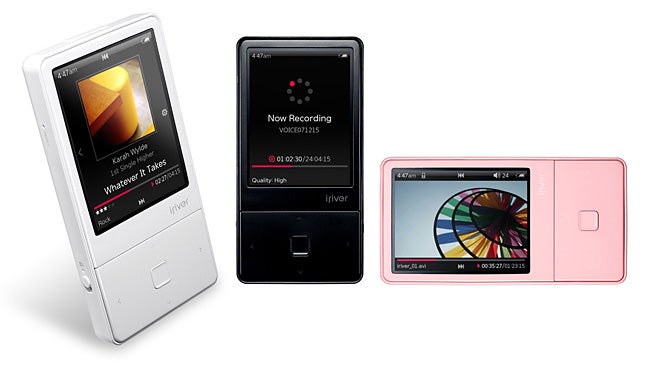 Classical music is handled equally well. I piped one of my favourite test tracks through it – a portion of Mozart’s ”Requiem” – and it handled all the complex nuances of the choral arrangements with a light touch and ease that really impressed. As with other premium pocket MP3 players, it isn’t entirely perfect: as I’ve mentioned, the bass isn’t as full and warm as some might prefer and as such it can’t compete with the superlative sound quality of the Sony NWZ-A829, but it’s right up there with the likes of Creative’s Zen, Apple’s nano and is noticeably superior to the Sandisk Sansa View.


But, all-in-all, the E100 is not a player I’d be happy recommending. Apart from its good quality audio output, decent range of features and Flac support, there’s very little about this player that makes it stand out from the competition. And it has its share of foibles and annoyances too. The price tag of £100 is reasonable and much cheaper than the 8GB Sony NWZ-A829, but again it’s nothing special. Unless Flac playback is absolutely critical, the 16GB Creative Zen which is now available for the same money, is by far the better deal.