Despite Gordon’s complete lack of enthusiasm for the B20, iRiver has to be congratulated for creating an amazingly small portable DAB player. Considering that devices like Pure’s Pocket DAB required a substantially large pocket, and even the well featured MPIO PD100 left much to be desired in the style stakes, the B20 hasn’t so much moved the game on, but has actually rewritten the rules. This is, without a shadow of a doubt, the coolest portable DAB player to hit the market, and that’s before you even begin to look at the other features. 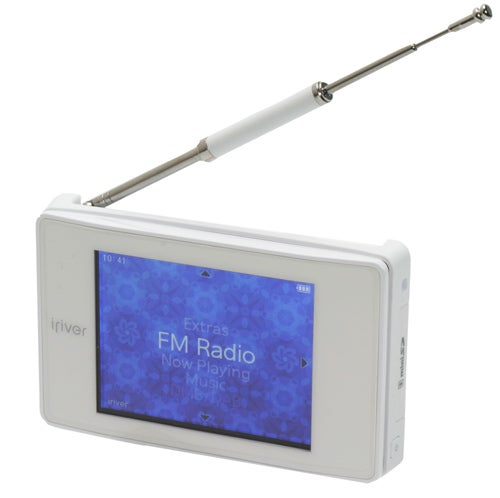 The B20 definitely had a good starting platform, sharing much with the superb iRiver Clix 2 player that I reviewed back in May. Like the Clix 2, the B20 employs a landscape aspect ratio, with a button free fascia. Navigation is controlled by clicking the fascia of the device on each of its four edges. It may be hard for users of players with traditional navigation methods to understand just how intuitive the B20 is to use, but take my word for it, like the Clix 2 before it, the B20 is a joy to use.


The 2.4in screen on the B20 is bright and very vivid, although it wasn’t the easiest to view when in bright sunlight. I found this a little odd, because the 2.2in screen in the Clix 2 didn’t seem to suffer so badly in strong ambient light environments. Another issue is that despite being incredibly careful with the device, it managed to pickup a small scratch in the bottom left corner of the screen. If anything it proved that iRiver needs to bundle slip cases with its devices – when I reviewed the Clix 2 I resorted to carrying it in my Sandisk Sansa pouch to keep it safe. 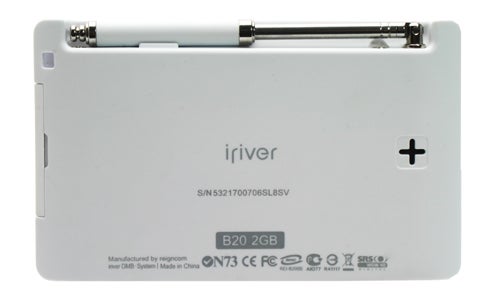 As with the Clix 2, video looks pretty good on the B20, but you will have to go through the hassle of transcoding your video in order to view it, assuming that your video content is in XviD or DivX format. This is where the Creative Zen player steals a march on its competitors, with native XviD and DivX support. The problem with having to transcode, is that you’ll do it a couple of times and then lose interest. No doubt Apple doesn’t see this as a problem, since it expects its users to just download their video from the iTunes store, but there’s no such infrastructure in place for iRiver.

As with the Clix 2 before it, the sound quality on the B20 is superb. With support for MP3, WMA and OGG, there’s reasonable choice when it comes to codecs. That said, with the Creative Zen supporting AAC, the B20 won’t be so tempting to existing iPod owners. Also, for the real mobile audiophile, the lack of FLAC support will be a drawback – it’s also rather puzzling, considering that FLAC is basically a lossless version of OGG.

Listening to high bit rate MP3 files (256kbps and above), the BE20 turned in a glowing performance, especially when coupled with a set of Shure E500PTH earphones. Pink Floyd’s Dark Side Of The Moon was a complete joy to listen to on the B20, with Great Gig In The Sky standing out as a real triumph – the slow and measured build up to the staggering vocal crescendo had me reeling, and remembering just why this is one of the best albums ever produced.


Switching to Nigel Kennedy’s interpretation of Vivaldi’s Four Seasons, the B20 proved that it was just as effective with classical music. Although many consider Kenedy’s Four Seasons to go against the traditional style for the piece, I like the faster and more aggressive interpretation, and that aggression comes across perfectly via the B20, with every bow attack on each string injected into your head. 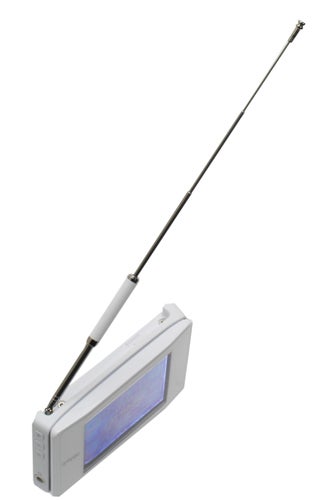 
If you read Jon’s Cowon D2 review last week, you’ll realise that the B20 isn’t the first truly compact MP3/DAB device to grace these pages. But the problem with the Cowon D2 is that Jon found it almost impossible to get DAB reception, despite trying to use the device in a variety of locations. Thankfully I had no such issues with the B20, finding first rate DAB reception almost everywhere I went. Even wandering around the TrustedReviews car park, which is notoriously bad for radio and TV reception, the B20 managed to lock onto a plethora of stations without so much as a hiccup.

The sound quality via DAB is every bit as exceptional as from resident digital content. In fact, you’d be hard pushed to tell whether you were listening to DAB or a resident track, encoded at a decent bit rate. Listening to a variety of stations, playing everything from rock to jazz to classical music, the B20 turned in a flawless performance. If there’s one caveat, it’s that you really need to use the telescopic aerial for good DAB reception – there is an option to use your headphones as an aerial, but the reception suffers significantly as a result.

Like the Cowon D2, the iRiver B20 also receives DMB (Digital Media Broadcasts), which gives you the option of actually watching TV on the device. Unfortunately, there is no DMB service in the UK, so this is something of a wasted feature for us Brits. DMB is widespread in Korea, which is why Korean companies like iRiver offer support for it. That said, DMB broadcasts started in Germany last year in conjunction with the World Cup, while a trial is also currently running in Paris, so hopefully we’ll see UK broadcasters dip their toes in the DMB waters soon.


You can also record DAB broadcasts to the B20, although the modest 2GB capacity of my review sample wouldn’t leave you much space to do so if you’ve already got a lot of music on the device. It’s therefore a good thing that the B20 has a miniSD card slot, so you can augment your storage easily and cheaply. With a 2GB miniSD card costing around £12, you could double the capacity of the B20 without breaking the bank. 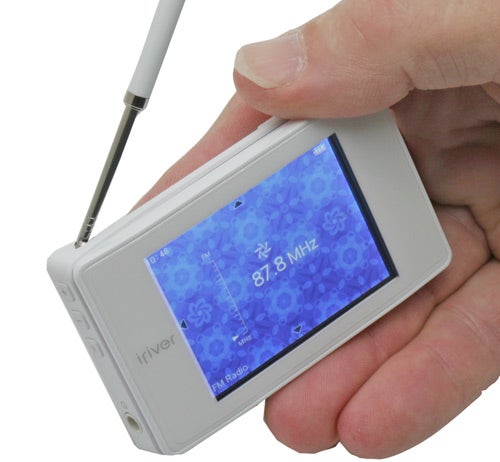 The B20 also supports the DAB EPG feature, allowing you to schedule recordings using programme data supplied by the broadcasters. However, even though I often found the EPG symbol flashing while I was listening to certain stations, I wasn’t able to access any EPG data. To be fair, most of the stations in the UK are only trialling their EPG functionality now, so it could well be that part of the equation at fault rather than the B20.


However, it’s worth remembering that the Creative Zen uses standard SD cards and supports SDHC, which means capacities of up to 8GB are available, with 16 and 32GB on the horizon . The Cowon D2 also uses standard SD cards, but doesn’t support SDHC, although there are rumours that a firmware upgrade will address this issue. Either way, standard SD is definitely a better option than miniSD, which is even less prevalent than microSD.

Despite having a built-in DAB receiver, the B20 also sports an FM tuner. I doubt that this is out of any sense of altruism on iRiver’s part, rather the fact that the Clix 2 has a built-in FM tuner, so it obviously got carried over to the B20. Not that extra features are ever a bad thing of course.


Bizarrely, while the Clix 2 used a standard mini-USB port for charging and PC connection, iRiver has equipped the B20 with a proprietary connector. This means that you need to use the bundled cable whenever you want to connect or charge the player, whereas with the Clix 2 you can use any mini-USB cable, of which most consumers will have many these days. 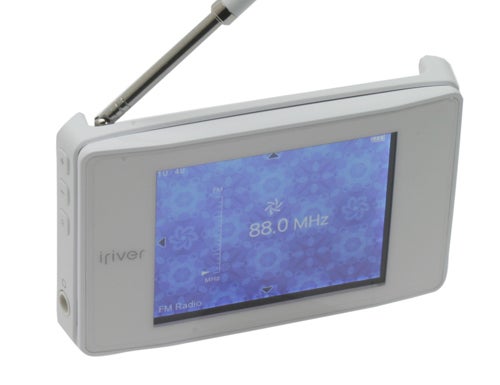 When I reviewed the Clix 2 it was a little pricey compared to the competition, but it was also far better than anything else out there. However, the B20 is expensive even by iRiver standards – the 2GB version I’m looking at here costs £169, which is the same price as the 4GB Cowon D2! The scary thing is that the 4GB B20 costs a staggering £209, which is an unbelievable premium for 2GB of extra flash memory, especially since you could buy three 2GB miniSD cards for less than that £40 price differential.


Obviously I expect to be paying a bit extra for the DAB support, but there is absolutely no justification for charging £40 extra for 2GB. By comparison, even Apple only charges £30 extra for an 8GB nano over a 4GB version! Ultimately, it’s this uncompetitive pricing that drags an otherwise great player down.


The iRiver B20 is a very impressive media player with great integrated DAB support. Sound quality and navigation are both superb, while the DAB reception is also first rate. Unfortunately this is, quite simply, a very expensive player, with the similarly specified Cowon D2 offering twice the capacity for the same price.


Add to this the fact that the Creative Zen and iPod Touch are just around the corner, and the B20 doesn’t look that special. Yes the B20’s DAB reception is fantastic, but you’re going to have to be VERY serious about DAB to stump up the cash that iRiver is demanding.