With what has to be the ultimate fusion of old and new hi-fi technology, ION Audio’s new LP DOCK turntable features the now ubiquitous iPod dock. Designed specifically for the iPod owner wishing to archive and digitize their old vinyl music collection, the LP DOCK will record audio directly to a 5th generation iPod video or 2nd generation nano. 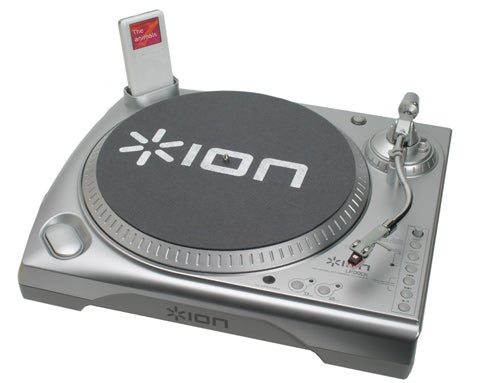 Now you may be thinking that this is just another blatant attempt to flog yet another pointless iPod accessory. But with the ability to record in CD quality uncompressed 16-bit WAV format, using an iPod to make hi-fi quality recordings actually makes pretty good sense. And if for some strange reason you don’t currently own an iPod then fret not, because the LP DOCK will also record directly to your computer via USB, which also gives you the additional flexibility of saving in other formats such as MP3.


At first sight the LP DOCK looks pretty much like any other hi-fi turntable, and despite the plastic construction the build quality is generally good for a turntable costing £130-odd. The s-shaped tonearm feels smooth enough in action with no obvious play in the bearings, and has a removable head shell which makes it easier to adjust or replace the stylus system. What is noticeably missing however is a hinged lid to keep the dust at bay. There’s also no tonearm lever, which can sometimes be useful when lowering or raising the tonearm near the centre of the record. 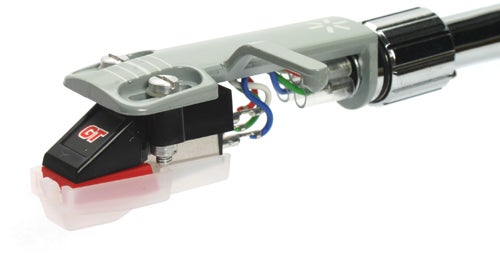 The head shell comes pre-mounted with a Numark ‘Groove Tool’ cartridge to get you started straight out of the box. The cartridge normally retails for around a tenner on its own, and so lies firmly at the budget end of the market. Of course anyone really serious about archiving their record collection could replace this with a higher quality model if they wish. But more on that later.


The main power button is situated at the rear of the turntable. Along the front is the large Start/Stop button and also the 33 and 45rpm buttons to control the speed of the platter. Alongside the speed buttons is useful 3.5mm jack input, allowing a cassette player or other external music source to be connected for recording to the iPod. One welcome feature of LP DOCK’s design is the motor unit, which is suspended on three rubber bushings to help isolate any motor rumble from the rest of the deck.

The iPod dock itself is located at the rear left corner of the chassis but unfortunately ION doesn’t supply any Universal Dock Adapters in the box. No problem I hear you say – I’ll just use the dock adaptor that came with my iPod. Well the problem with that is the standard Apple dock adaptors are usually white, which don’t look all that great when used with silver-coloured accessories. 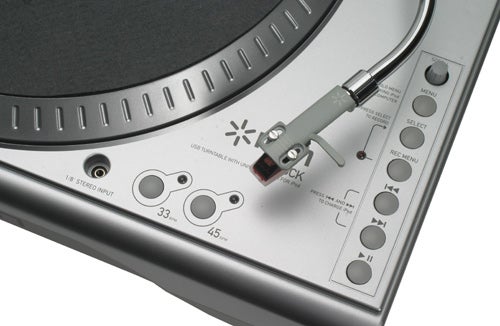 Styling issues aside, the controls for the iPod are all well situated to the right of the tonearm. These allow you to navigate the menu system just as you would normally, with a Scroll knob replacing the iPod’s ClickWheel controller. Recordings on the iPod are made using the built-in Voice Memo recording function, and the LP DOCK features a dedicated Rec Menu button for that purpose.


Underneath on the bottom panel are connections for the captive mains power lead and the RCA (or ‘phono’) audio cable. Depending on your amplifier’s input connections, the audio output can be switched between a lower output ‘phono level’ normally used for turntables, or a higher volume ‘line-level’ output. There’s also a gain knob to adjust the overall output of the audio signal but I was able to leave this set at maximum without any problems. A USB connection is available for connecting the turntable to a computer using the supplied lead. When hooked up to a PC the LP DOCK essentially acts just like an external soundcard, appearing as a new USB audio device in the Sound Control Panel.

Of course like any other turntable, a certain amount of setting up is required before the LP DOCK can be put to work. Installing the platter and fitting the rubber drive belt over the motor spindle is straight forward enough. Setting up the tone arm requires slightly more care, but you can’t really go wrong following the instructions in the handy quick start guide. Once the correct tracking weight and anti-skate adjustment have been set, all that’s left to do is place the felt slipmat on top of the platter, pop your iPod into the dock, and you’re ready to start recording.

While it’s possible to record to an iPod without connecting the phono audio outputs to a hi-fi system, it’s probably a good idea to do so anyway in order to monitor the actual sound. With a record cued up in the right place, simply press the Rec Menu button to enter the record mode on the iPod, and then press the Select button to start recording. Pressing Select again will either pause the recording, or alternatively you can use the Scroll knob to select the Stop and Save option. It really is as straight forward as it sounds. 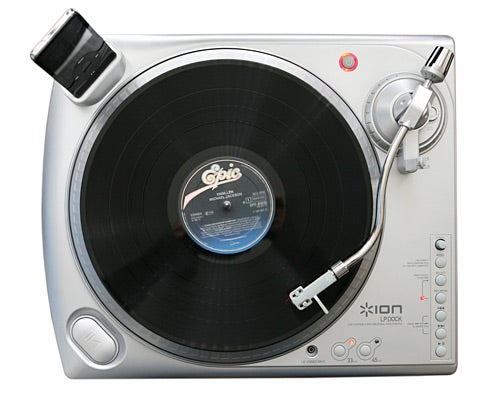 Saved recordings can then be played back through the LP DOCK’s phono outputs, and are accessible by navigating to the Voice Memos area of the iPod’s menu. The recordings can of course be transferred to a computer via the LP DOCK’s USB connection just as you would with a normal iPod dock. You can even listen to music from your computer through your hi-fi using the turntable’s phono audio output by selecting the turntable as the main USB playback device in the Sound Control Panel.


If you’d rather record straight to your computer via USB instead, a copy of EZ Vinyl Converter 2 for the PC is also bundled. This features Gracenote’s rather impressive MusicID technology, which analyses the waveform of the recording and automatically retrieves album, artist and song information from the Internet. For some reason, Mac users only get the standard version of EZ Audio Converter which doesn’t include the MusicID feature. You should also bear in mind that the EZ recording software is limited to 160kbps MP3 recordings. For higher quality PC-based recording and advanced editing features, a copy of the excellent Audacity freeware is included on the CD. 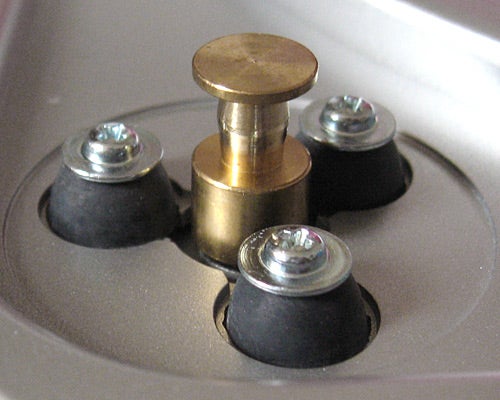 Right, let’s be honest here about the sound quality. The LP DOCK isn’t going to win any prestigious hi-fi awards (or probably any hi-fi award for that matter). That said, at the lower end of the musical spectrum the LP DOCK continually impressed me. Spinning Michael Jackson’s Thriller album for example, the bass line from a WAV recording of Wanna Be Startin’ Somethin’ was nice and deep with plenty of rhythm. Likewise the drums and bass guitar on Billie Jean were impressively weighty, with the midband sounding neutral and clean.


However, comparisons with the CD version of Thriller revealed the LP DOCK was struggling to cope with the top end, usually tending to sound slightly harsh or bright and just lacking a certain refinement. I wouldn’t consider this harshness to be a fault of the turntable, but rather down to the quality of the supplied ‘starter’ cartridge. I’m fairly confident the deck would perform far better if this was replaced with a proper budget hi-fi cartridge. Two possible options that immediately spring to mind are Audio Technica’s highly regarded AT-95E and AT-110E cartridges, both of which offer excellent value for money at around £20 and £30 respectively. Spend much more than that however and I suspect the quality of the turntable and tone arm will then start to reveal themselves as a limiting factor to achieving hi-fi nirvana.


Being easy to set up and offering an acceptable sound quality out of the box, the LP DOCK turntable will appeal to anyone who wants to digitally archive their old vinyl collection with the minimum of fuss. However, aspiring audiophiles are advised to spend another £20-30 on a ‘proper’ hi-fi cartridge to ensure they extract the most they can from their prized vinyl records.