Along with a reasonably priced 1TB of raw storage, Iomega’s latest StorCenter delivers both wired and wireless networking making it quite unusual as no other NAS appliance offers these facilities as standard. Some, such as Thecus’ YES Box, allow you to add a wireless USB dongle but as we found with this particular box there is a very limited support for these types of devices.


However, before you rush out and buy the StorCenter bear in mind that since its launch Iomega has released a firmware upgrade that actually takes away some of its wireless functionality. On delivery our StorCenter was loaded with firmware v1.54 but we were advised by Iomega’ support to upgrade it to v22.22. Not only is this a bizarre jump in firmware revisions but this removes the wireless access point mode leaving the appliance only capable of acting as a client. Iomega was unable to advise on why it made this decision. We started testing with the original firmware and found that although performance was very poor, the access point mode worked without any problems. If you do go for firmware upgrade we recommend caution as it will reset the unit back to factory defaults, reformat the drives and removes all users and shares. 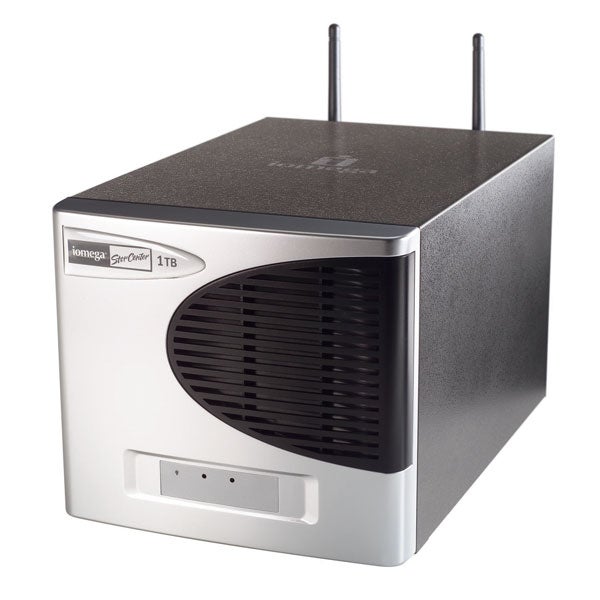 Considering its low price, the appliance offers a reasonable hardware package as you get a quartet of 250GB Western Digital IDE hard disks and these can be configured as a JBOD, a stripe, a RAID-10 striped mirror or a RAID-5 array. Processing power isn’t anything to write home about as it uses a 266MHz MPC8241 processor teamed up with a modest 64MB of memory. Gigabit Ethernet is on the menu and the two USB ports at the rear support both storage device and printers. Replacing a failed drive is a lengthy process as you need to take off the lid, remove the entire drive carrier after unplugging the drives and then figure out which one needs swapping out.


With Iomega’s Discovery Tool on the case, installation won’t take long as this searches the network for StorCenter’s, displays them ready for configuration and provides direct access for mapping shares, installing network printers and running the management interface. The latter is easy enough to use and opens with a basic rundown on the appliance’s status with buttons alongside for restarting it and applying factory defaults. The firmware upgrade also enforces the User Account security mode so you can’t have shares available to all any more with a guest account as the minimum security option. Access controls are good as the appliance maintains a local user and group database and also integrates with NT Domain and Active Directory authentication.

Pop a USB stick in the back and the appliance will automatically share it although you will need to set up user access to the default share for this. Multimedia has been an area Iomega has traditionally steered clear of but it now supports UPnP media adapters and provides a database for sharing files which can be accessed directly from the web interface. You also get support for connecting digital cameras and the appliance will automatically copy all pictures into a default directory. To work with the appliance your camera will need to be the variety that can be recognized as a standard USB storage device. Despite its growing popularity amongst other NAS vendors Iomega still doesn’t offer an iTunes server.


Backup features are good as the appliance can manage scheduled full and differential tasks that’ll copy local data either to a USB device or to another StorCenter over the network. For workstation backup Iomega has dropped its Backup Pro utility in favour of the vastly superior EMC Retrospect Express. This enables you to create local backup jobs and schedule them to copy data to the appliance and after the first full backup has completed it’ll only copy new or modified files. 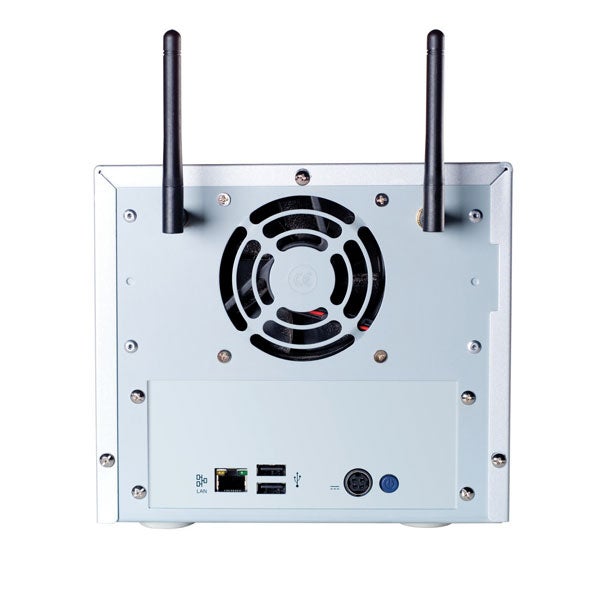 The drives default to a RAID-0 stripe which only takes a few minutes to build whereas a RAID-5 array will take around 6.5 hours to complete. Note that as the arrays are managed in software the latter will hit performance. With a striped array we copied a 690MB video file over Gigabit Ethernet and saw read and write speeds of 10.8MB/sec and 9.9MB/sec. With a RAID-5 array in residence these dropped to only 6.8MB/sec. FTP performance using the stripe delivered the best speeds as the FileZilla utility returned read and write speeds of 13MB/sec and 10.3MB/sec respectively. Wireless performance is unimpressive with the appliance returning barely 2MB/sec for the same test file. Backup performance using Retrospect will also depend on you choice of RAID array as securing 12.2GB of data from a Supermicro 3.2GHz Pentium D workstation to a RAID-5 array returned 4.4MB/sec whereas copying it to a stripe improved average speed to 5.9MB/sec.


A low price for a 1TB NAS appliance although this is reflected in the modest level of features on offer. It’s easy enough to install and use but performance isn’t great and why the firmware upgrade removes the wireless access point mode is beyond us.

(centre)A separate utility is used to apply new patches but back your data up first as this is a destructive process.

(centre)The new firmware does away with the wireless access point mode in the previous version.

(centre)The web interface is easy enough to use but the features aren’t particularly exciting.

(centre)No iTunes server but you do get a UPnP media server which can be configured from the browser interface.