There’s no denying that we love to play with the latest and greatest pieces of hardware at TrustedReviews but every so often we need to take a reality check to make sure that we’re reviewing the type of hardware that you actually buy.


These Extreme Edition processors are unlocked and carry an extreme price of more than £600 so no matter how fast they run, there’s few people we’d recommend buying them. Instead the more sensibly priced quad core Yorkfield E9000 series and dual core Wolfdale E8000 processors will do for most of us. Today we’re looking at a Core 2 Duo E8500, which is the fastest of the Wolfdales, with a clock speed of 3.16GHz, and has a street price of £182.


And yes, we have noted that the E8300 model code is ‘missing’ from that short list. This as yet unofficial CPU is rumoured soon and if logic is anything to go by, it is likely carry a clock speed of 2.83GHz. Time will tell, though. 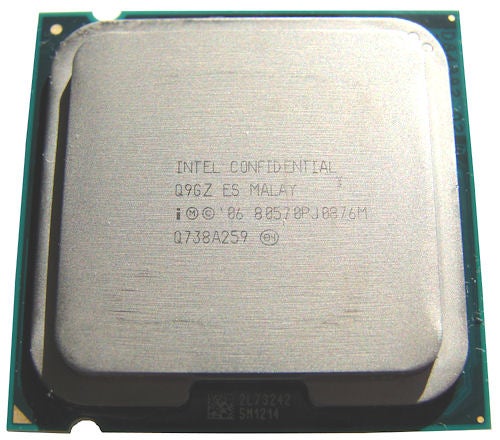 Wolfdale uses the 45nm Penryn fabrication process which gives Intel the space to shovel in 6MB of L2 cache but essentially the new processor is just a Conroe that runs on a 1,333MHz front side bus. They both use the same LGA775 socket and have the same core technologies with support for SSE4.1 media extensions as well as EM64T 32-bit/64-bit technology and C1E/SpeedStep. You might not think it but SpeedStep is interesting as the E8500 will switch down in clock speed from 3.16GHz to a speed of 2.0GHz when the processing load is low, which should help to save energy and keep temperatures down.


The clock speed of 3.16GHz also bears some attention as it means that Intel is using an unusual clock multiplier of 9.5x instead of a whole number such as 9x or 10x.


One area of change from Conroe to Wolfdale is a reduction in core voltage from 1.325V to 1.225V along with a reduction in Thermal Design Power (TDP) from 75W with the 65nm process to 65W on 45nm. We used a mains power meter during testing to check how much power the system was drawing and were unable to see a great deal of difference between the E6750 and E8500. Though it doesn’t seem it at first, this does prove the point in favour of Wolfdale as the E8500 used the same amount of power as the E6750 yet it delivers an extra 500MHz.


Intel is clearly confident that a Wolfdale processor requires a minimal amount of cooling as the heatsink in the box in absolutely tiny. The cooler is very low-profile with a finned aluminium body that stands a mere 15mm tall and it is dwarfed by the fan which takes the total height of the cooler to 40mm. Flip the cooler over and there’s another surprise in store as the heatsink is entirely made of aluminium and doesn’t use a copper core.


Throughout the testing we made little effort to push the memory speed as it doesn’t have much impact on performance once you get up past 800MHz but it can affect system stability. We weren’t going for extreme performance but instead wanted to achieve results that you should find easy to replicate.


The initial run with the E6750 was made at the standard speed of 2.67GHz, followed by overclocking the front side bus to 390MHz/1,560MHz to achieve the same 3.16GHz as the Core 2 E8500. As you would expect this overclocked E6750 had very similar performance to the standard E8500 with an extra 10W of power draw when the CPUs were under load. As it happens 3.16GHz was the limit for the E6750 on the stock 1.35V core voltage but a small amount of extra power took the CPU speed to 3.52GHz and an extra dose of voltage got us to 3.68GHz. By this stage the system power draw was 170W which isn’t a huge leap from the original 135W so we have no doubt that you could squeeze more speed from the E6750 if you use suitable levels of cooling and power. 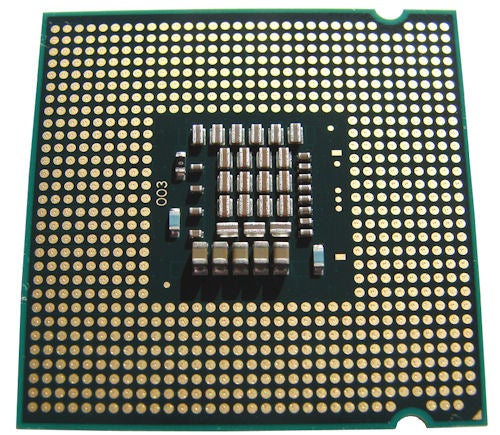 The Core 2 Duo E8500 delivered good performance at stock speed and slightly out-performed the E6750 when they were both overclocked to 3.51GHz. At that stage the E8500 was drawing 25W less than the E6750 as it was running on standard core voltage yet it was able to complete POV-Ray slightly faster than the E6750. As a final flourish we fed the E8500 some extra power and got the speed up to 4.05GHz. That was a core voltage of 1.395V which is a modest increase however we see reports from CeBIT of a Core 2 Duo E8500 running a core voltage of 1.824V with huge cooling to achieve a clock speed beyond 5GHz.


For a final comparison we ran the quad core Q6600 and found, just as we expected, that the quad cores don’t deliver any benefit in PCMark05 but they perform better than a fast dual core CPU in POV-Ray. This processor also managed to overclock by a full 1GHz with a modest amount of extra voltage and it demonstrated that fans of video coding and other CPU intensive tasks should choose a slower, cheaper quad core Q6600.

If you’re in the market for a dual core processor then we’d strongly recommend a new Wolfdale based E8x00 series chip over the older Conroe based E6x00 series. Both deliver exceptional performance with plenty of headroom for overclocking but the Wolfdale chips will get you more speed for less power if you run them normally and if you’re overclocking, they’ll go further than ever before.