The Insta360 Go is an action camera, but not quite what its name suggests. This is Inta360’s first non-360-degree camera, but it has plenty of other appeals to make up for the “standard” wide-angle view.

It is tiny and includes a wide array of mount accessories that GoPro would make you pay for. Its FlowState stabilisation is excellent, smoothing out footage to a similar extent to the GoPro Hero 7 Black.

However, extremely clever algorithms can’t quite make up for the small sensor used in the Inta360 Go. While video quality is good in bright conditions, you’ll see the quality drop not just at night but when you run, cycle or walk under a forest canopy. 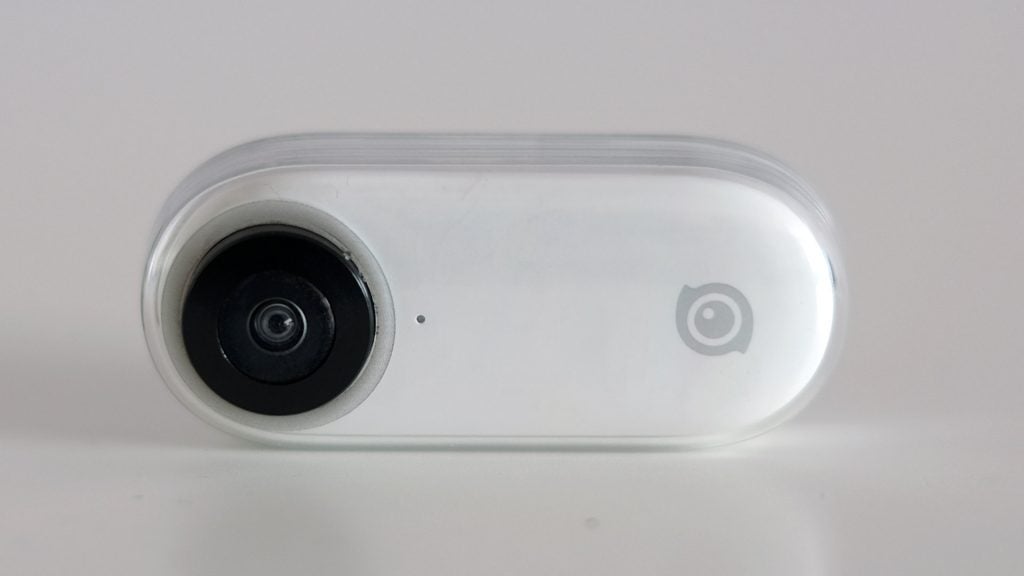 Design – The Insta360 Go is tiny, light and super portable

“That looks like a set of Apple Airpods”. This might be your first reaction when you meet the Inta360 Go. The actual camera part is a little stick, smaller than the average USB pen drive. It clips magnetically into a charge dock, which is a dead ringer for the charger of a pair of true wireless earphones.

You use the dock to access all your recoded video clips, as the Insta360 Go camera itself does not have a screen or USB socket. The duo is a novel design but the size, shape and weight of the camera are the main draws. 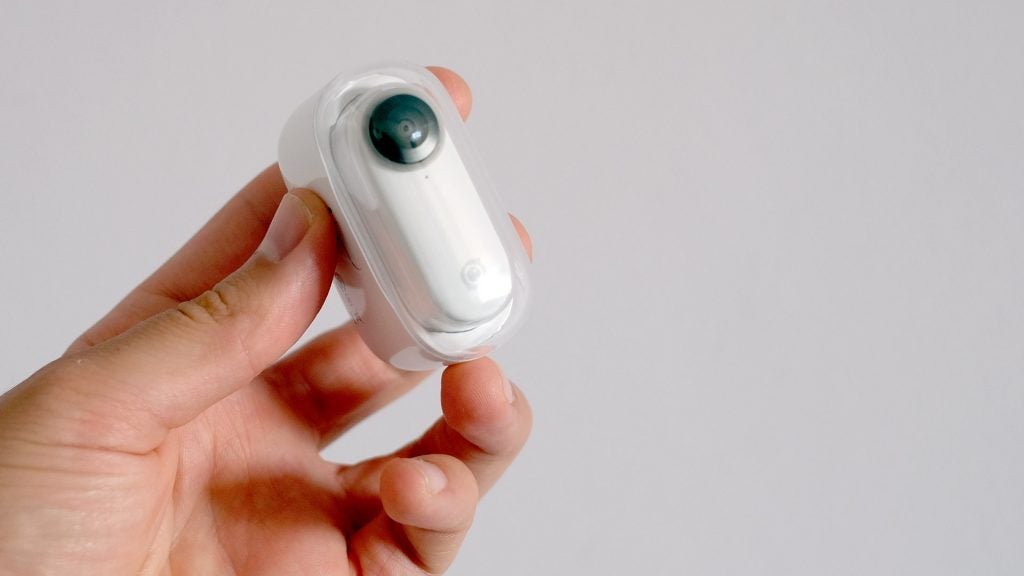 It weighs 18g, and makes a GoPro look big. At one point I clipped it to a t-shirt while out for a run. Plenty of people do this with a Hero 7 Black, of course, but here you don’t need a special chest strap, and won’t come across like a wannabe YouTube celebrity or “citizen journalist” when doing so.

The Insta360 has a handful of mounts. There’s a threaded stand for tripods, selfie sticks and action cam grips, a magnetised one you can attach to your fridge, a clamp/clip, one with a reusable sticky surface and a necklace. Most of these use a strong magnet to keep the Insta360 Go in place. 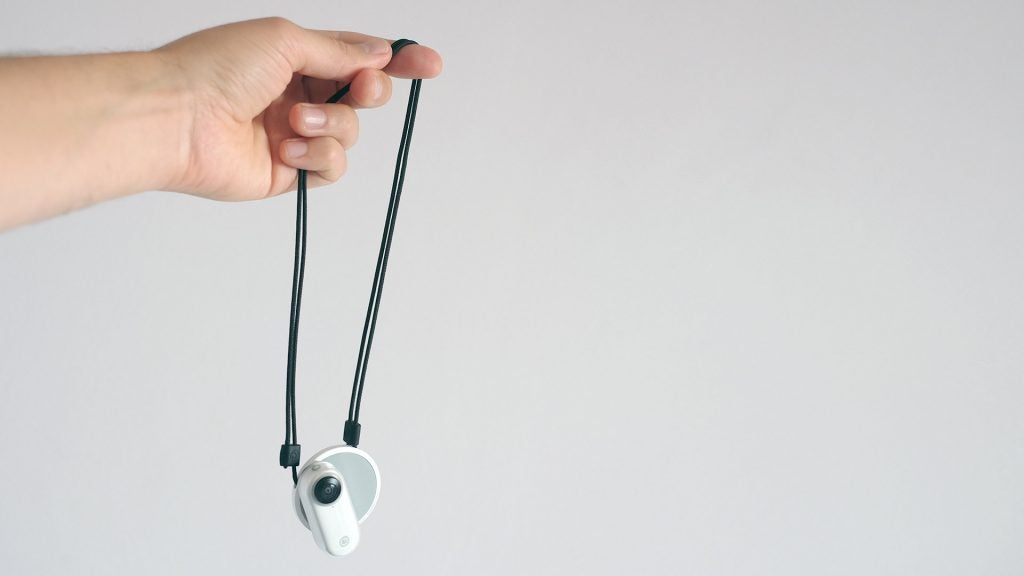 This lets you get a little creative. I’ve used the necklace mount most. You can wear the backing magnet under a shirt. This stops the bouncing effect of the pendant, and makes the look more subtle. The Insta360 Go camera appears to float on your shirt.

It’s a “go anywhere” camera, although some may look at you with suspicion. You could claim the Insta360 Go is a fitness tracker, but it doesn’t take a genius to recognise the camera up front.

Once you have the Insta360 Go locked and loaded, you simply press the button on the back to capture a clip. A press on the front works too, as the button is very sensitive. The dozen clips I’ve taken while the Go was sitting in a jacket pocket are proof of that. 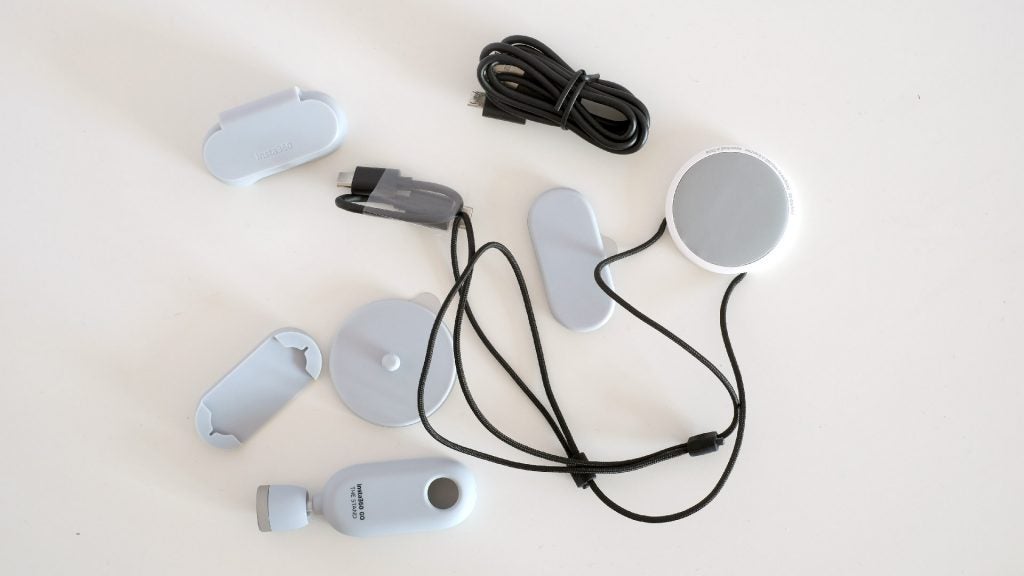 Here we meet the first of the Insta 360 Go’s limitations. It’s made to shoot 15-second and 30-second video clips, not to capture a whole off-road bike ride that you edit down afterwards. It can’t do that job, and the only longer forms of capture it can manage are time-lapse and hyperlapse.

This is bad news for extreme sports fans, cyclists and those who want to capture runs in interesting environments. But time-lapse and hyper lapse are the perfect fit for the kind of B-roll travel footage some YouTubers with higher product values like. And — this part is important — I’d rather wear an Insta360 Go than a GoPro, particularly when dressed “normally”.

You have some control when just walking around with the camera attached too. Single, double and triple presses set off different modes. You choose which in the companion app. Here are the available modes; photo, 15-second video, 30-second video, Hyperlapse, Timelapse and 100fps slo-mo.

You effectively specify three gesture presets, and if you want more control, you can use the app, which acts like the Bluetooth remote.

This Bluetooth control is limited. You don’t get a preview image of the camera view, and you can still only review your pics and videos by plugging the Go into the charge dock, and then plugging that into your phone.

Android owners beware: the case has a Lightning socket on its side. This camera is clearly made for iPhone owners, although you can plug it into your Android using the microUSB on the side. 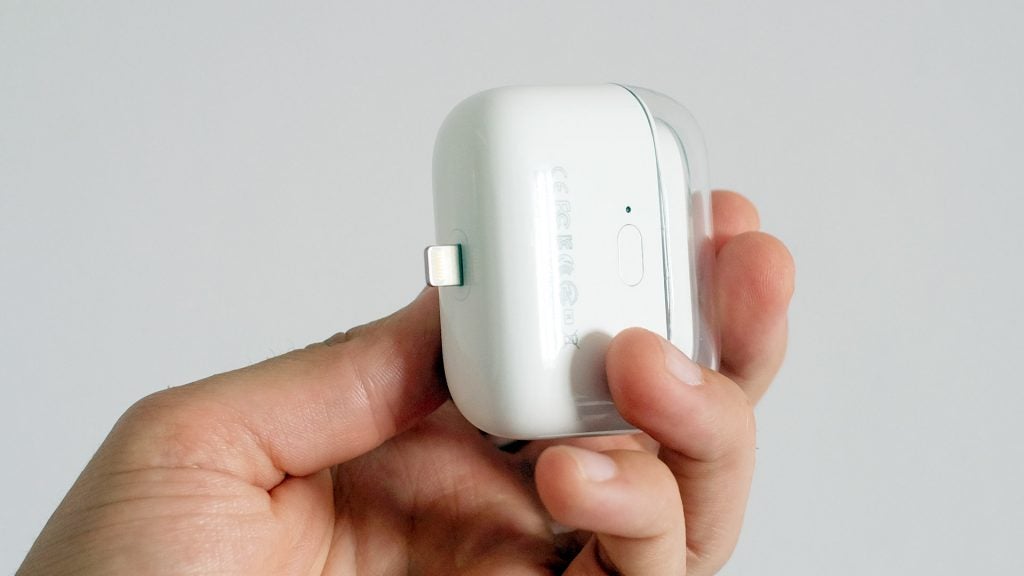 That Lightning plug seems very vulnerable too. It sticks out, begging to be knocked. Insta360 does include a silicone cap for the bottom but it seems an afterthought, and one I’ve probably already lost by the time you read this.

Each charge gets you “up to 200” clips according to Insta360. That sounds like a lot, but it only equates to around 50 minutes of capture. As there is no longer capture mode it’s hard to tell what it’s full-to-flat battery life really is. Anecdotally, the Insta360 Go’s battery seems to drop fairly quickly when experimenting with a few different modes. I’d recommend taking the battery case with you if you’ll be out shooting for more than couple of hours.

You have to be a little careful with it, too. The Insta360 feels fairly well-made and its low weight means drops from some height aren’t likely to be fatal, but it’s only tested to IPX4. This means it can handle a splash, but certainly not underwater shooting. 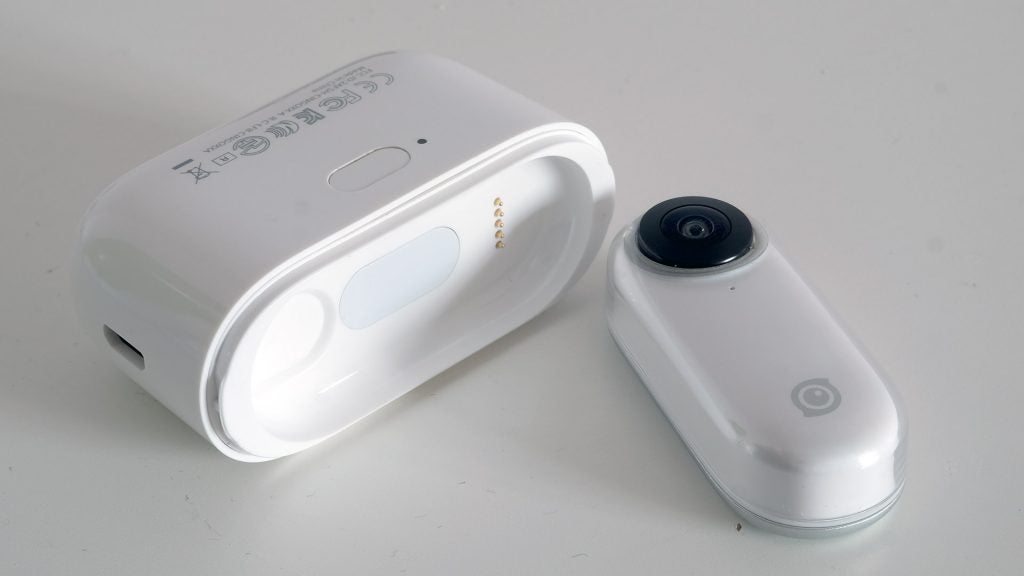 Image Quality – The Insta360 Go’s footage is smooth, clean and impressive, in the right light conditions

FlowState is easily the best part of the Insta360 Go’s footage. This is electronic stabilisation informed by a 6-axis gyroscope, which can determine motion in full 3D. It does not use the physical stabilisation you see in some cameras, or in a gimbal, but the effect is far better than I expected.

I took the Insta360 Go out for a run, and FlowState more-or-less completely erases the footfall impacts and up-down jogging of a runner’s movement. The wide angle field of view does help in this, as it minimises the proportion of the scene this movement affects. But the vertical smoothing in particular is remarkable. 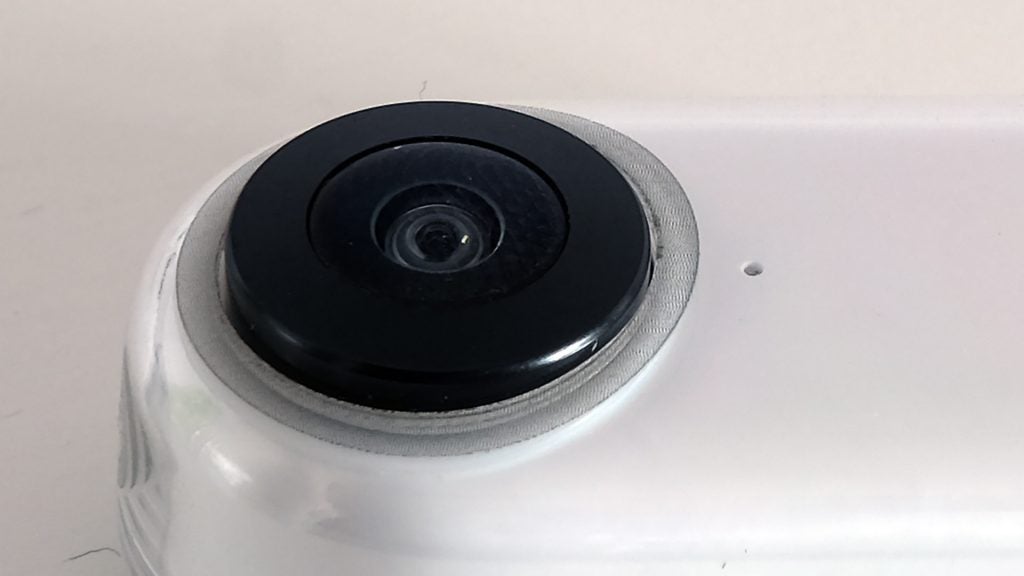 Motorlola added a similar mode to its One Action phone recently, but here the effect is even better. Motion is smooth and clean. It beats any phone and has an even more gimbal-stabilised like appearance even than GoPro’s latest Hypersmooth stabilisation.

How is this possible? The Insta360 Go has a roughly 180-degree lens on the back, but the view isn’t quite that wide. That area of footage around the edge, which the camera sees but we don’t, is used to smooth the final video.

Video at 1080p is fairly sharp at its best, and you can choose between a smoother or more detailed look when you export clips. Insta360’s app has a “remove grain” feature that can get rid of some processing-based artefacting caused by the processing of fine textures. It reduces the texture in gravel paths snaking off into the distance too, but the smoothing effect isn’t hugely pronounced.

I made sure to take the Insta360 Go between different lighting conditions when testing. My aim was to see how the Insta360 Go deals with varying lighting, moving from darker to brighter environments. It handles this just fine. The transitions in exposure settings are quick and smooth. But this same footage did reveal the camera’s real weakness.

In any light conditions below the ideal, there’s a clear drop in detail and dynamic range, and a major reduction in sharpness caused by frame blurring. When the speed of motion is too great for the exposure window of each frame, you end up with motion blur. The Insta360 Go is affected by this far more clearly than the GoPro 7 Black. 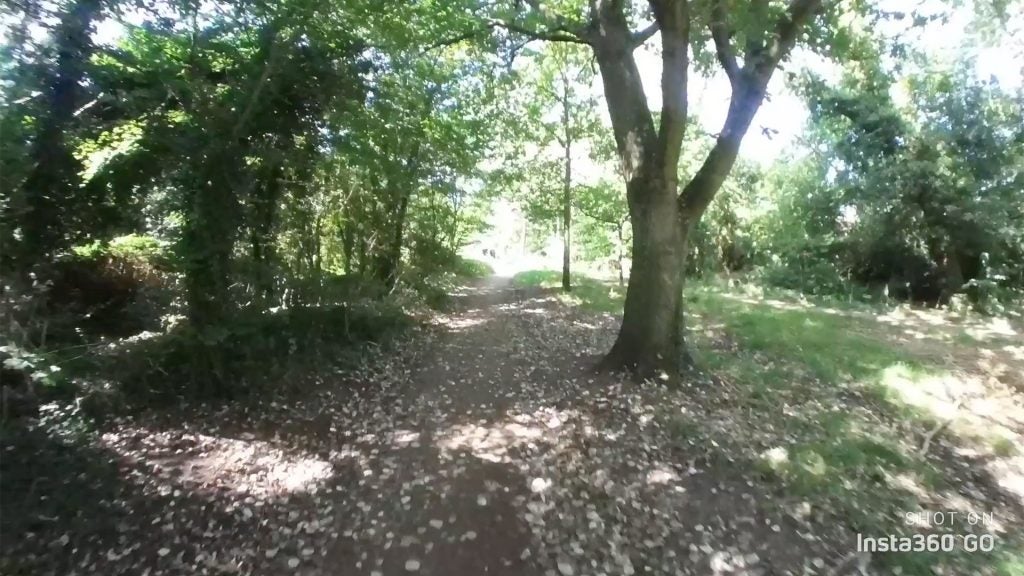 Here’s a screenshot from the Insta360 Go’s video footage, where the camera has increased sensitivity to deal with the tree cover 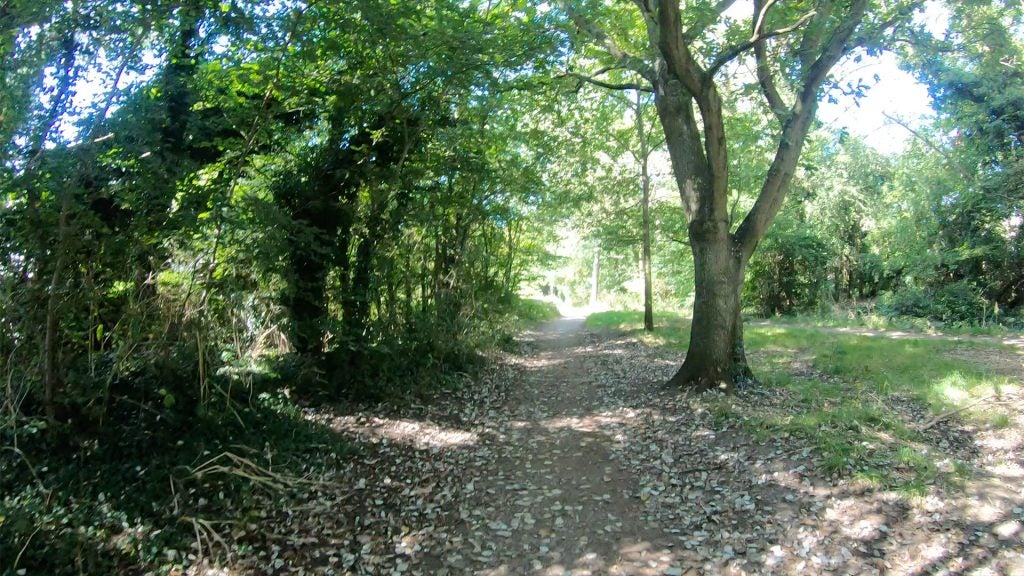 Here’s a similar still from the GoPro Hero 7 Black – note the sharper picture, greater contrast and dynamic range you get with a larger sensor and generally higher-end hardware

This is a reminder of the limits of software enhancement in video. The Insta360 Go likely has quite a small sensor (we asked for the details, but Insta360 won’t hand them out), and smaller sensors have to juggle exposure speed and sensitivity more readily than larger ones. Using higher sensitivity means lower dynamic range and lower detail. Using slower exposures makes blurring of frames during motion more likely. It’s a balancing act.

I don’t think Insta360 has made any bad choices here. It seems to both increase sensitivity and slow down the shutter when needed, but how quickly you can see their negative effects shows why many are still better off with a larger camera with a larger sensor.

Dynamic range does not get close to matching the GoPro Hero 7 Black on a sunny day either, with greater likelihood of overexposure in the sky.

None of this comes as any great surprise and my initial reaction to the Insta360 Go was still one of flat-out admiration for what Insta360 has achieved with its excellent stabilisation. But this camera isn’t in the same league as the GoPro Hero 7 Black in terms of detail, dynamic range and image quality in slightly lower light. 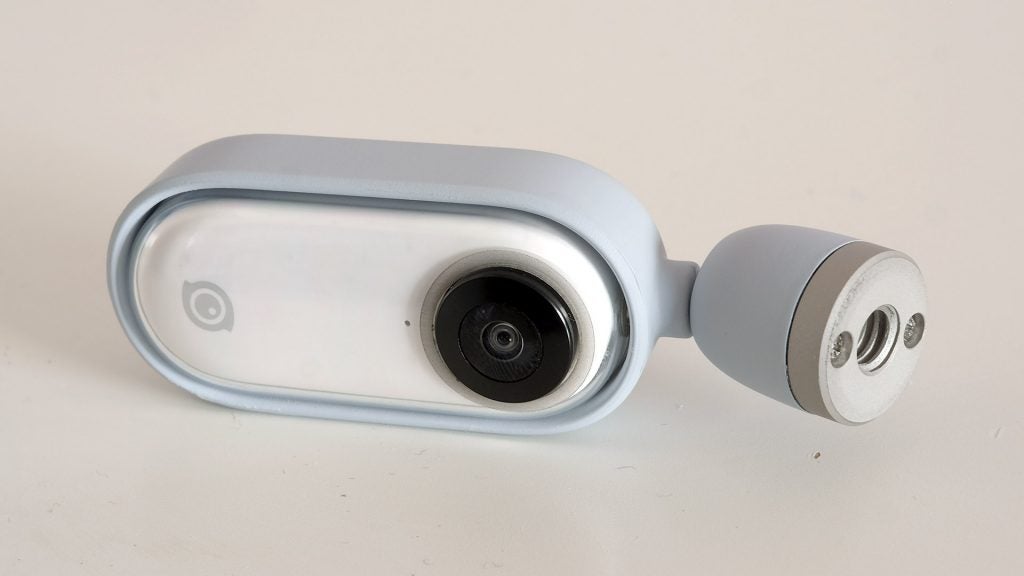 The Insta360 Go is an action camera for the influencer generation. It’s incredibly light, dead easy to use and makes juddery motion look smooth.

In use there are obvious reasons to buy one of Insta360’s bigger cameras, or a GoPro, though. The small sensor’s limitations become obvious when the lighting is not perfect and we – no surprise here – would not recommend this for indie film-makers or extreme sports folks who want to record a whole bike ride.

However, if you’ll mostly shoot in good lighting and will be happy with 30-second clips, you’ll find the Insta360 Go surprisingly capable.