INQ and its sister company 3 have carved out an enviable niche in the mobile phone market, creating basic low cost phones that still have all the social networking and some of the Internet browsing abilities of much more expensive handsets. The INQ brand started with the INQ1, which cost a mere £80, and was followed by the Mini 3G that took things even lower to £60. Now, the Chat 3G moves things up a gear, adding a full QWERTY keyboard to the mix and raising the price to £89.99. It won’t be a combination that appeals to everyone but those wanting a cheap and capable messaging machine should definitely pay attention.


Aesthetically, the splashes of red – most notably the whole back plate – certainly make the Chat 3G stand out from the crowd but in terms of form factor and physical layout this is a plain old QWERTY smartphone of the BlackBerry ilk. Unsurprisingly, this makes it quite a large phone at 113 x 61 x 15mm but a relatively modest weight of 125g and generally neat layout make it easy to handle. 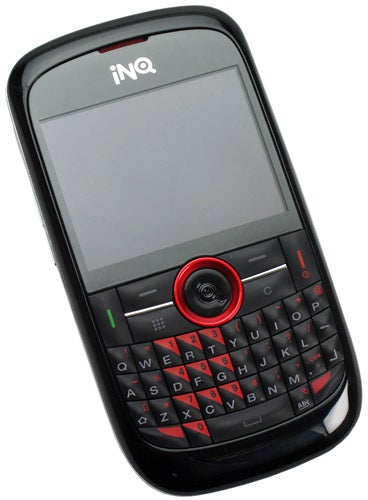 The Chat 3G’s keyboard has keys with a very pronounced curve, making them fairly easy to distinguish from each other. However, they are a little stiff and overall we prefer those of the BlackBerry Bold 9700, but then given the price difference you’d expect that to be the case. Certainly the layout is nice and intuitive and the predictive texting works very well, making speedy typing a distinct possibility. 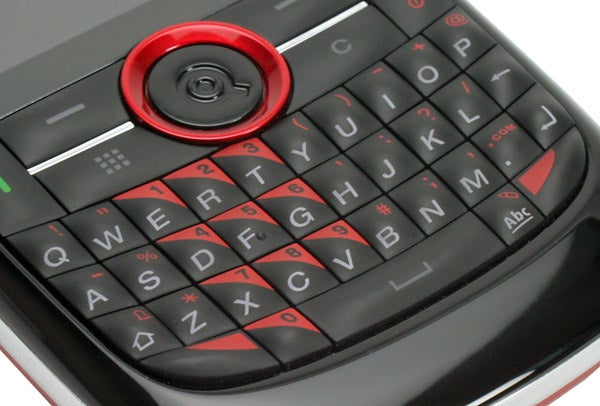 Above the keyboard is a fairly typical selection of navigation keys including call answer and call end buttons (the latter doubling as power), two soft keys, a menu button and one labelled ‘C’ for Cancel. These all sit around a central circular D-pad that consists of a directional ring and inner selection button. All of these work very well together and make for a very intuitive user experience, though considering the emphasis on messaging we think many people would like to see a trackball or similar for fast scrolling.


Aside from the Chat 3G’s generally plasticky look and feel, its screen is the first real clue that this is a budget phone. With a size of 2.4in yet a resolution of just 320 x 240 it is noticeably less sharp than that of just about any similarly sized device we can think of. There’s also a lot of contrast shift when viewed from any angle apart from directly perpendicular, and its slow refresh rate can strain the eyes after a while. It’s perfectly adequate for general messaging and phone use but viewing web pages or long emails is a chore. 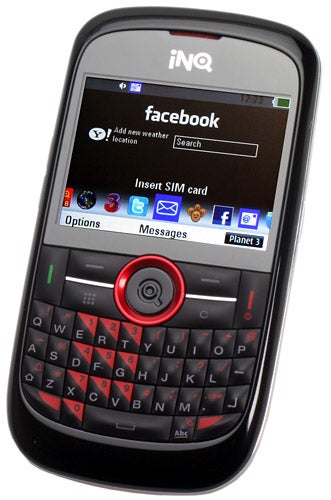 The web browser itself is reasonably capable thanks to its ability to display full size webpages. However, it is quite slow, particularly when scrolling, which combined with the low resolution makes for frustrating progress. Something else that doesn’t help is the lack of Wi-Fi, which means browsing is slow wherever you are despite the inclusion of 3G. Factor in the price of this handset, though, and it’s about as good as could be expected.

INQ makes a point of noting how you can sync music and videos organised through iTunes and Windows Media Player with the Chat 3G via some included software, which is a fairly useful feature. However, we’re more of the drag and drop persuasion so would rather remove our microSD card, which sits under the back cover, and put whatever files we want on it rather than use yet more software, even if said software does convert files on the fly. MicroSD cards up to 16GB are supported but you get nothing in the box. 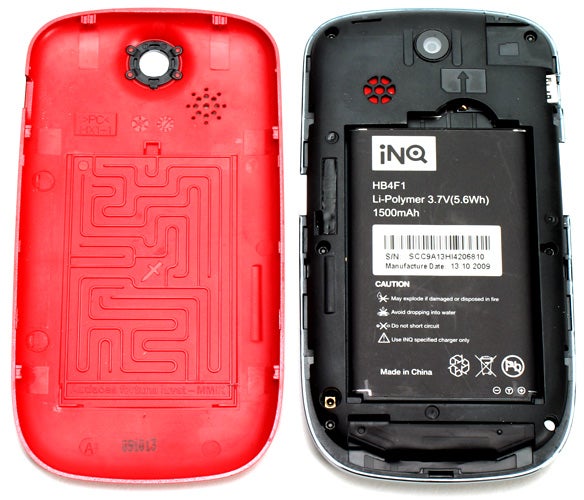 More to the point though, this phone is useless as a media player. While the music and video players are perfectly easy to use, the lack of a proper headphone jack and use of a single-piece headset means you’re stuck with the low-grade bundled earphones for music listening. Meanwhile, video playback is essentially non-existent and certainly too poor to be watchable. This is mainly due to the abysmal framerate but the lack of compatible formats and supported resolutions doesn’t help either.

All told, this isn’t a multimedia phone and should only be considered for its messaging capabilities, which are, it must be said, quite impressive. Apps for Facebook, Twitter, Skype (which is free to use on 3’s network), and MSN messenger all come pre-installed and completely integrated into the OS. So, a single contact can be used to message someone through all these different services while a single messages folder keeps you up to date with any goings on at a glance. Push email is also freely supported for Gmail accounts.


This sort of integration is becoming more and more common place and soon enough it will be an expected feature of many smartphones but for such a cheap device to have it is mighty impressive. It really is effortless to flip back and forth between updating your Facebook status, checking out Stephen Fry’s latest Twitterings, and reading your work emails. The only hindrance is the aforementioned screen and the general slowness of the operating system that, while not appalling, is certainly nothing compared to the likes of a BlackBerry. 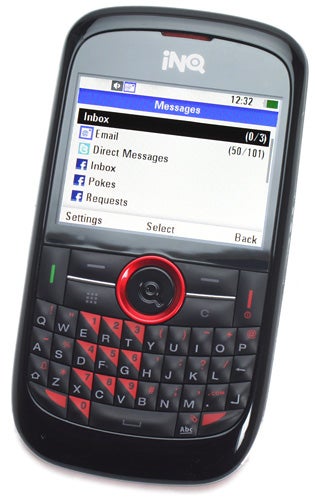 Elsewhere, the INQ also features some basic Java games including ”Sims 3” and a brain training one that could be fun for a while. The ”Deal Or No Deal” game should never be opened, though, just on principle as I think the show is awful. On top of this you also get a calculator, calendar, memo app, unit converter, and voice recorder app and the INQ Hub gets you access to more apps and games for download. Though there was a reasonable choice of nearly 3,500 apps, finding them was a rather slow and frustrating affair, and all those that we tried were pretty slow in operation too. But again, for such a cheap phone, it’s at least nice to have some choice.

The operating system features a single desktop on to which you can add up to three widgets out of a choice of Facebook, Twitter, Weather, Google search, Yahoo! search, a clock, and RSS feeds. Below this sits a carousel of shortcuts to the vast majority of the phone’s main apps. INQ calls this the ‘Switcher’ and it can be rotated using either the D-pad or a button that sits on the right edge. By using the latter, the Switcher can be called up when using another program so you can quickly and easily flick between programs (I didn’t realise you could do this when shooting the video, thus my negative comment).

The menu button opens a grid of 12 icon shortcuts to quickly open the picture, video and music folders; access the camera; and open the phone’s settings (amongst other options). Once you get past the lurid main menu, all the sub-menus are intuitive and use black and white text to keep things simple. 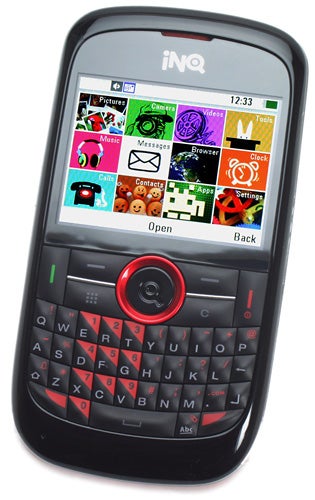 The camera is a very basic 3.2-megapixel affair that has autofocus but no flash. It’s just about adequate for the odd sunny outdoor snap but give it a low light situation and it simply can’t cope, producing blurry and grainy shots that are next to useless. Likewise, video is pretty awful with just 320 x 240 pixels on offer and a framerate that simply can’t cope with motion of any sort. 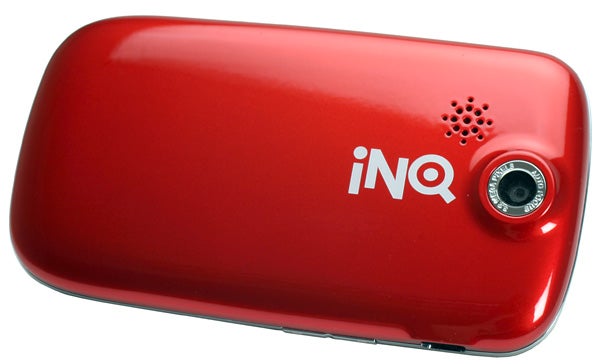 With the back off, you’ll find a 1,500mAh battery sitting below the camera. We got a solid two days of use out of this while using the INQ Chat 3G extensively for our review. This isn’t great, but turn off some of the automatic updating of the messaging services and we think this could be extended to three or more days. INQ quotes a talk-time of over nine hours and a standby of 14 days. Call quality was perfectly adequate, though nothing special, and we had no problems with finding a signal.


While the INQ Chat 3G certainly has its limitations, namely its lack of a headphone socket, poor screen, and rather underwhelming build quality, it fits its remit of a cheap messaging device perfectly. The integrated social networking apps are all easy to use, the browser is decent, the keyboard is impressive, and the price is definitely right. 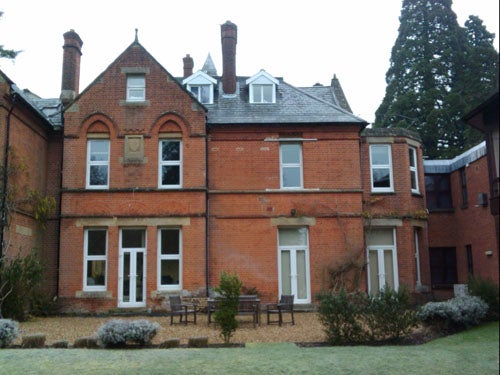 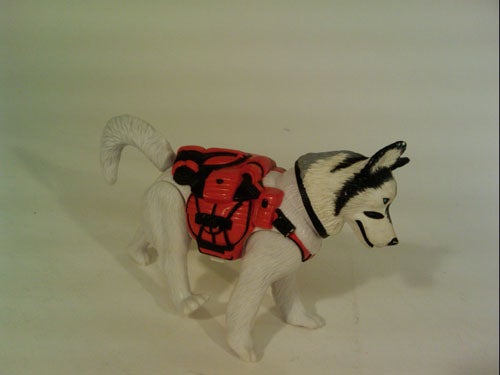 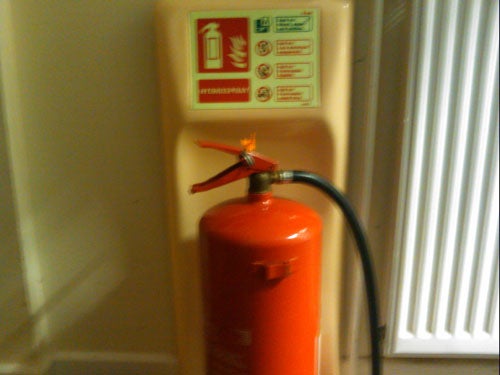 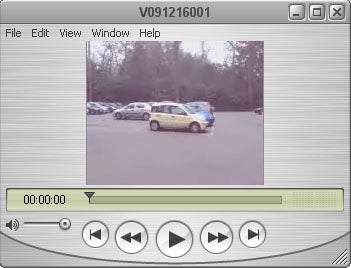