Size, we’re constantly being told, matters. Whether it’s your car’s engine, your processor speed, or how small your mobile phone is, what you own and how big (or small) it is is a matter of some importance.


And though this projector from InFocus doesn’t have the sex-appeal of a 6.0-litre V12-engined Ferrari Enzo, or the social kudos of owning a mobile phone so small you can put it in your pocket and hardly know it’s there, it is the smallest projector we’ve ever seen and that counts for something, especially in the normally staid world of business technology.


The LP120 is about the thickness of a Victoria sponge cake, but it’s not this that is so impressive. It’s the footprint of the projector that is truly tiny: if you had enough cash to buy two of these projectors they’d fit side by side on a sheet of A4 paper with room to spare. And one of them weighs less than a bag of sugar.


The technology that allows this kind of shrinkage is, of course, DLP and it’s all housed in a rather attractive silver and dark grey case with tactile, rubberised top, where all of the controls can be found. It’s nice to see the important functions – such as keystone, volume and source selection – are given their own buttons, and menu navigation is straightforward as well.


Under the front edge of the projector is a single pop-out leg for adjusting the height of the picture. It’s a bit flimsy, so you’ll need to make sure you retract it fully before packing it away, and fiddly to use, though fortunately the build quality elsewhere is much better.


The LP120’s compact dimensions do, however, mean that compromises have been made in terms of its capabilities. Most notably, the size restricts the brightness of the bulb and the potential of the optics, which means that both brightness and maximum screen are down on larger machines. In a world where many projectors start at 2000 ANSI lumens, 1000 ANSI lumens looks a tad underpowered, and a maximum screen size of 137in isn’t all that either.


But it’s really not that much to worry about. Not so long ago, manufacturers were touting projectors with these sorts of specifications for medium-sized boardroom and even small auditorium use, so when you whip this diminutive diamond out of your laptop bag at your next presentation the last thing you, or your audience, will be thinking of is whether or not you’ll be able to read the slides.


Even used for projecting home movies at larger screen sizes, the lack of power doesn’t come in to play too much. True, when compared to a 2000 lumens machine the difference is noticeable and you’ll have to dim your lights a little more, or close the curtains, but this is a small price to pay for the fact that, when the main feature has finished, you can put your projector away in a drawer.

The picture quality is generally fine too, with images brightly resolved and extremely well focused. The only small niggles were a slight fall-off in brightness in the top corners of the picture and, at the lowest level of zoom, some outward bowing at the sides and top of the picture.


Perhaps more disappointing, though, especially given that this projector will see a lot of service in poky meeting rooms and small offices, is the fact that it has a relatively long minimum throw. In fact the shortest distance the LP120 can be positioned away from a wall or screen is 1.5m; we’ve seen much larger projectors that can do better than this and it reduces the projector’s all-round flexibility.


The incredibly small size of the LP120 also, inevitably, limits the number and variety of connections available. In fact there are only three ports, all crammed on one end of the projector: an S-Video socket, a 3.5mm audio input, and what InFocus calls an M1-DA port. This basically an extended DVI port: in this case the supplied video cable splits in two, terminating in D-SUB and USB connectors. The latter enables you to use your remote to navigate your slideshows without having to reach for the mouse.


What the M1-DA port also enables LP120 owners to do is use wireless technology to help out with projections. InFocus supplied our LP120 with one of its LiteShow modules. You plug it in, install the LiteShow software on your wireless-equipped laptop and, hey presto, you can carry out presentations without having to connect the two with a bulky video cable. 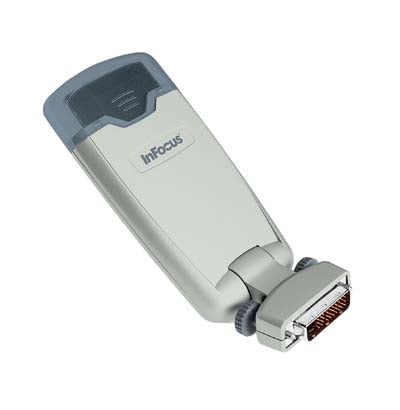 Handily, the software will install onto a USB memory key too, so you don’t have to reinstall the software every time you want to use the projector with a different laptop.


There are limitations to this type of connection, however. The LiteShow module uses the 802.11b standard for connections, which limits the bandwidth to 11Mbits/sec, which means there’s no chance of using it for projecting video.


It’s also a very expensive option at a whopping £320 extra, so even for those who have had enough of faffing around at the beginning of a meeting plugging cables in and arranging themselves close to the projector, it’s unlikely to prove an enticing addition.


If it’s the ultimate in portability you’re after, then there really isn’t anything out there that comes close to the LP120. Its size and weight means that it can quite comfortably be carried around in one bag along with a medium-sized laptop without putting too much strain on your poor old shoulder.


Understandably InFocus has had to make some performance compromises to squeeze everything into such a small package, such as a lack of brightness and an array of connections that could hardly be called generous. And you’re unlikely to want to go for the wireless option at a hefty £320 premium.


But for this projector’s target market – the mobile professional who doesn’t want to have to develop a body-builder’s physique just to get from meeting to meeting – these are limitations that can quite comfortably be lived with, especially when you consider that without the LiteShow wireless module, this projector can be picked up for less than £1,300. 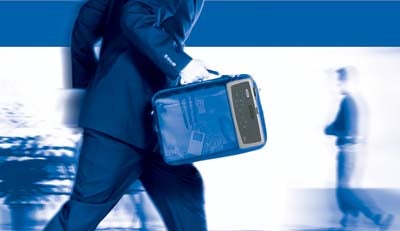