These are busy – and successful – times for InFocus. The brand has recently rocked our world in two very different portions of the projection market, with the astounding X10 entry-level model totally rewriting the rule book of what sort of video projection quality you can expect to find for under £900, and the brand’s IN83 showing for the first time what astonishing AV feats Texas Instruments’ new DarkChip 4 DLP technology is capable of.


All of which raises both hopes and fears for the new IN80. This model slots neatly into the InFocus range one rung above the X10, slightly bettering that budget belter’s spec for a price of £1299. But while we have no doubt, after the X10, that the IN80 will be a great performer too, we can’t help but wonder if it’s sufficiently better to warrant the extra £400. Obviously the best way to find this out is to do a straight comparison of the two projectors.


Aesthetically there’s nothing between them at all; they both feature the trademark vaguely circular InFocus design, with matt black bodywork and a surprisingly large footprint for this point in the market. 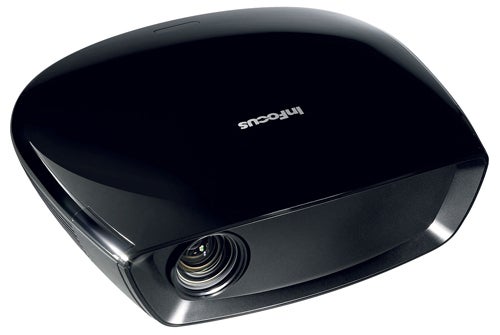 For better or for worse they both also ship with a jointed foot mount attachment on which you can rotate or tilt the whole projector chassis, supposedly to help you get an image on your screen more easily. The reality, though, is that this footmount system is actually rather fiddly, especially if you’re trying to tilt it forward or back by a small amount.


Another troublesome set-up point about the IN80 and the X10 alike is their use of a relatively long-throw lens. This suits large living rooms, yet the projectors’ relatively budget prices suggest that some of their potential buyers may have limited living space at their disposal.


To find out if the IN80 can deliver the sort of image size you want from your projector, check out the InFocus projection calculator.


The IN80 is far from a dead loss to set up, though. Vertical image shifting is possible via a wheel built down the projector’s side, there’s plenty of keystone correction for getting your image edges straight, and perhaps most significantly of all, there’s a manual iris adjustment to help you get just the right balance between brightness and contrast.


Other key features common to the IN80 and X10 include the hugely acclaimed DNX video processing engine from PixelWorks; Texas Instruments’ Brilliant Colour processing for improving colour saturations and tones; and full support for professional calibration by an Imaging Science Foundation engineer.

As we’d anticipated, the IN80’s picture quality is excellent for its money. In fact, crucially, it is noticeably better than that of the X10.


Black levels enjoy the greatest benefit, with slightly more of that ‘inky’ look we love so much during, say, the inevitably dark external shots on the Blu-ray of visceral vampire flick, ”30 Days of Night”. This helps the projector deliver a slightly enhanced sense of the size and scale of the ill-fated town of Barrow, Alaska, too.


The enhanced black levels also help to produce a marginal improvement in colour toning, helping the IN80 handle the unusually tricky and varied palette of skin tones in ”30 Days of Night” with slightly more naturalism and finesse than the X10. Though this is a much less overt improvement than the black level one.


The IN80’s image is also slightly brighter than that of the X10, which adds just a bit more visual impact to the chilling overhead crane shot showing the vampire horde inflicting bloody carnage on Barrow’s snow-covered streets.


The extra brightness additionally helps dark parts of the picture contain just a little more shadow detailing, and probably plays a part in the excellent colour toning we mentioned, too.

Continuing with our ”30 Days of Night” viewing test, the IN80’s HD sharpness seems just as impressive as that of the X10, revealing details as fine as individual snow crystals, and every bit of oral unpleasantness missed by the vampires’ clearly abysmal dentists. Both projectors have Full HD resolutions, and it shows.


In fact, the IN80 really only has a couple of serious performance problems: running noise, and the rainbow effect. The former finds the projector emitting quite a bit of racket from its cooling fans, even without the projector’s ‘high power’ mode selected. The only good news here is that the noise produced is, at least, pretty constant, rather than suffering with the sort of peaks and troughs sometimes heard on projectors using dynamic irises (as opposed to the IN80’s manual one).

The rainbow effect, meanwhile, finds stripes of pure red, green and blue colour flitting around in your peripheral vision or over particularly bright image components – especially if the camera pans or your eyes flit across the screen.


On the IN80, possibly because of its slightly greater brightness, I actually spotted rainbowing marginally more often than I did on the X10. But honestly, it only crops up very rarely and very marginally for the vast majority of the time, and I for one still consider it an extremely small price to pay for all the video quality benefits DLP technology brings to the table. That is unless you happen to be one of those people who’s particularly susceptible to seeing it, or you want to use an IN80 in a particularly small room, meaning that your eyes may need to rove over the image more than would be the case in a large room.


One other, thankfully avoidable issue worth mentioning concerns the projector’s Brilliant Colour feature. For while this definitely does make colours look more vivid, it also ups the picture’s noise levels exponentially and in my opinion is best avoided.


The IN80 is undoubtedly a superb projector for its money. However, it is also to some extent a victim of the success InFocus has enjoyed with the X10. For while the IN80 is better than the X10, unless you’re particularly keen to go down the custom install route or want the peace of mind of the extra warranty, for me it’s not quite better enough to justify the extra £400.