Indesit has brought its production scale to the induction hob market, allowing it to launch some of the most affordable induction hobs you can buy. At under £300, the VIA6400C offers great looks and excellent value, particularly with its plush Schott Ceran glass top.

It’s relatively slow to heat compared to the best induction hobs, features are limited, and the key-press beeps can become a little annoying. However, in terms of solid performance and great value, this Indesit beats any ceramic hob with ease! 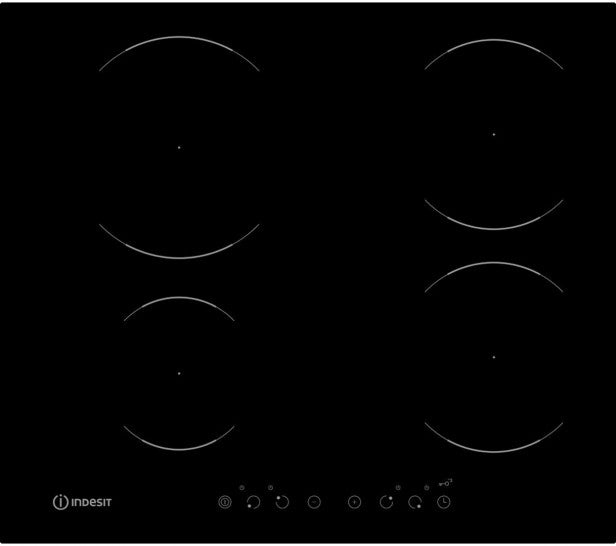 The VIA6400C is actually a premium model in Indesit’s ultra-budget induction hob series. At just £300 it won’t break the bank, but it certainly looks premium with its sleek ceramic Schott Ceran glass top, four burner zones and touch controls. The glass has no bevels or edge detailing, but sitting only a couple of millimetres proud of the worktop, it still manages to look sleek and modern.

Schott is a German brand and one of the world’s biggest glass-ceramic manufacturers – in case you were wondering. More importantly, its Ceran glass is tough and easy to clean. The dedicated Schott handbook accompanying this hob suggests using a metal scraper for hardcore cleaning duties, so the company is clearly very confident in the surface’s scratch resistance.

The VIA6400C isn’t over-burdened with features – not surprising given its price. You get four touch-controlled burners, which are split into two medium-sized circular marked zones to the right – ideal for pans around 19cm – and a combination of large and small zones to the left. The latter are perfect for pans around 21cm and 17cm respectively. 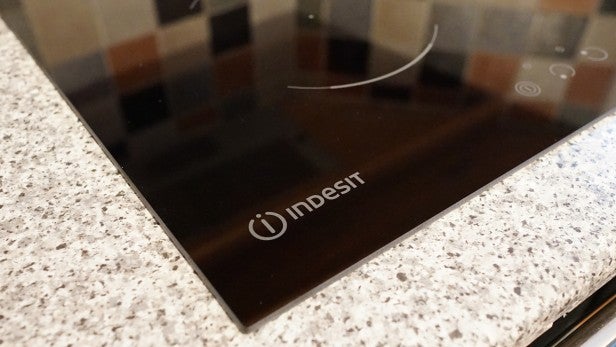 Each zone has a single button to select and then you use the central “+” and “–” buttons to control the power of the selected zone. This is from 1 to 9, indicated in crisp red lettering.

Once you remove a pan after use, the indicator turns to a “H” symbol to indicate the area will be hot – from conducting heat back from the pan; not the hob itself heating up. There’s no additional setting to boost heat, nor timer, simmer or keep warm functions.

You do get a child-lock button, however, which is enabled or disabled by pressing  for three seconds. The main touch power on/off button makes a fairly loud beep, and automatically powers down the hob after 10 seconds if you don’t start cooking. The zone selection and power keys also beep when pressed, but thankfully with much less irritating volume than the on/off button.

Just as a note of caution: if you’re shopping for this particular hob, Indesit has a lot of very similar model numbers in its hob range, including VIA640C, VIS640C, VRB640X and so on. Check the model number carefully. 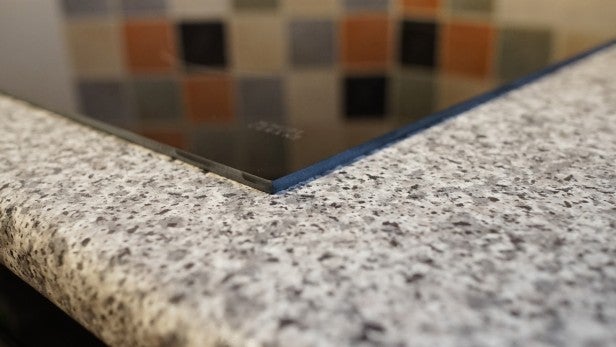 The touch controls on the VIA6400C are fairly responsive, and damp hands didn’t have any negative effect on the ability of the buttons to detect a touch. I say touch; in reality it’s more a touch and hold for a fraction of a second. We assume this little pause before anything happens is to stop accidental brushes from actioning a function.

Personally, the separate zone-selection and power controls aren’t a favourite. This setup increases the number of presses required to operate the hob, particularly if you have a number of pans on the go at once. You also need to remember to select the relevant pan before you change power levels – otherwise, it’s all too easy to pop up the power on the wrong pan. 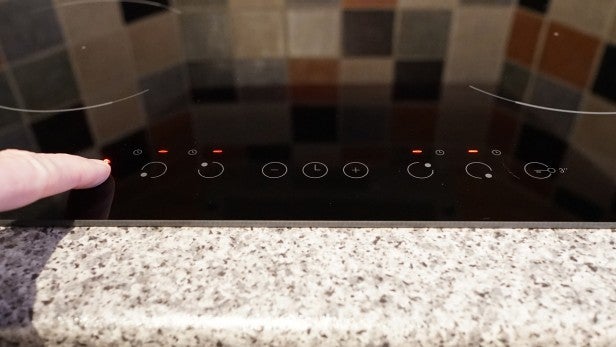 If you lift the pan off the surface, the zone automatically switches off half a second or so later, and the residual heat indicator comes on quickly. Needless to say, there is a beep to accompany this automatic activity.

On the subject of noise, this Indesit isn’t the quietest of induction hobs with a marked hum in operation and fairly loud cooling fans beneath. The fan noise will be somewhat suppressed as it will sit within a kitchen carcass when installed, but you will certainly hear it.

On a 60oC simmer test this hob was reasonable, if not outstanding, at keeping a constant temperature. It certainly required user input on the power controls to keep things simmering nicely.

If you do wander off and leave a pan to keep warm at this temperature, we found it did drift up over three minutes by around 4oC. Not disastrous – and while there are much better simmering hobs out there, none are available at this price.

Where this Indesit did get the TrustedReviews equivalent of a Michelin star was in cleaning afterwards. The Schott glass is extremely easy to clean and super-resistant to scratches and marks.

The manual does suggest protecting it from really tough spills – such as melted sugar – but for day-to-day cleaning a wipe over, or at most a scrape and a wipe, is all you’ll need for a spotless finish. 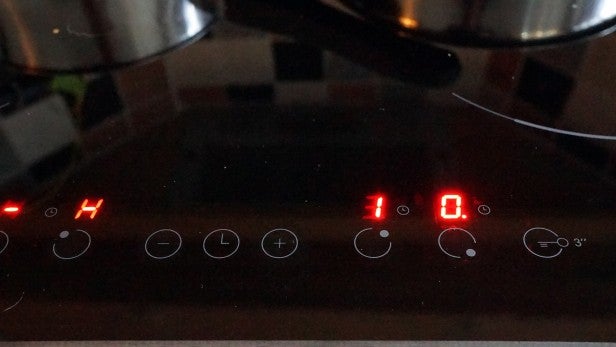 The VIA6400C has simple 1-9 power levels for each zone and no boost function. This does mean that you can run all four zones at maximum power at the same time without any burners being backed down to keep total power consumption within the hob’s 7kW limit.

Our thermal imaging tests with an over-size pan showed that each zone is nicely circular and delivers good, even heating throughout. You certainly won’t suffer from hot-spots with this hob, even if you use cheaper pans that have fairly thin steel bases. A great result.

Marrying pan sizes closely to burner size will result in the most efficient heating from an induction hob; we used 17cm, 19cm and 21cm pans on the small, mid and larger zones respectively. We filled these with 1, 1.5 and 2 litres of water corresponding to pan size, and individually timed how long it took for the water to reach 90oC with the burner set to its maximum 9 setting. 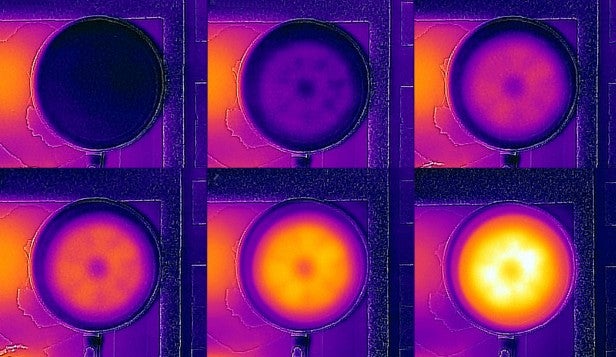 Given this Indesit’s affordable asking price, it wasn’t really a great surprise that it was no speed demon when it comes to heating up the pans. The smallest pan took 5mins 29secs to reach 90oC; the mid-size 6mins 9secs; and the larger 2-litre pan a lengthy 7mins 8secs. At full power, the burners were drawing 1.5kW, 1.8kW and 2.1kW respectively.

This is quite slow compared to some of the best induction hobs with a boost function, which can shave more than two minutes off each of these times.

Putting that in perspective, however: this Indesit is still much quicker than a traditional ceramic hob and would show all but the best gas hobs a thing or two about maximising time in the kitchen. 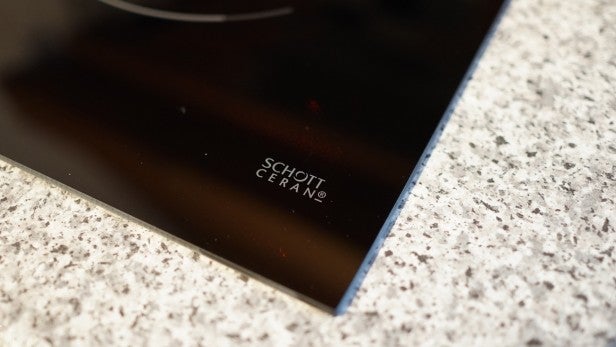 Should I buy the Indesit VIA6400C?

While the Indesit’s VIA6400C’s heat-up times are relatively slow and the features basic, this affordable induction hob offers efficient and even pan heating, and has a superb easy-to-clean finish.

The power-up beep is rather piercing and the controls are a little slow to respond, but we really can’t fault the overall performance at this price.

A superb value, if basic, hob that makes an excellent case for induction over standard ceramic models.