For sundry practical reasons we don’t review projection screens on TrustedReviews all that often. This is a shame, for we believe that getting the right screen for your projector and room setup can be almost as important as getting the right projector.


With this in mind, when we do look at projector screens, we try and focus on models that fit a specific brief or end user unusually well. Last time out, for instance, we tested the startling Black Diamond II from Screen Innovations, which was remarkably usable in non-blacked out rooms or with low-brightness projectors thanks to its outstanding ‘light amplification’ properties and surprisingly – but appropriately – affordable price.


Today we’re turning our sights further up the projection tree, towards the world of high-end installations. Once you get up to this sort of level, where paying five figures for a screen is more or less routine, the world’s your oyster in terms of screen finishes, mounting options, sizes, aspect ratios, curvatures and so on. 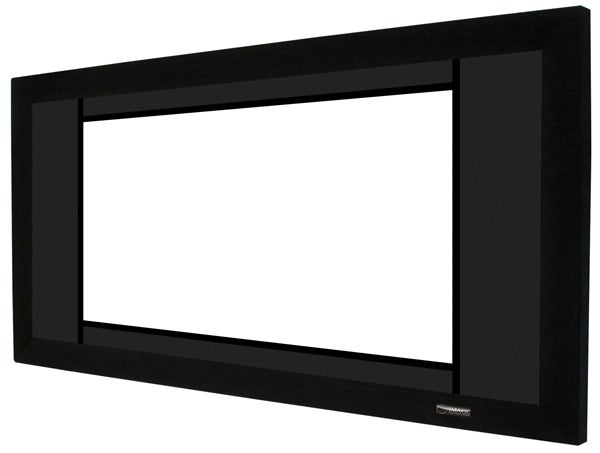 It’s hard to think of any premium projector screen that better illustrates this flexibility than the iMasque from German brand Image Screens. All iMasque screens are handmade – fast – to order, meaning they can cater for almost any size (up to a bonkers 12m) or native aspect ratio requirement. Also crucial to the iMasque’s appeal is the variety of screen materials you can use. The standard format (and the one we reviewed) is dubbed Nivo Black, and delivers a 1.2 gain from a matt-white screen backed by a black-coated rear layer – hence the Nivo Black name. This black rear layer is designed to stop any light passing right through the screen to reduce the ambient light the projected image has to contend with.


You can also go for a greyer front fabric to boost black level response, should your room be black enough to support a reduced brightness output. Plus there’s a Vevo series of fabrics that are acoustically transparent, meaning they use tiny perforations to allow sound to pass through the screen from any home cinema speakers mounted behind it.


It’s really quite common to find at least a centre-channel speaker fitted behind a screen in a professional home cinema installation – though the catch with acoustic transparency is that inevitably some light will pass through the audio perforations and onto the wall behind.


Finally, you can get the so-called Vilo material, which again offers grey or white configurations, but doesn’t have the black backing layer of the Nivo materials.

Many premium screen manufacturers get so caught up in developing and creating the perfect screen material that they apparently forget aesthetic concerns. But not Image Screens. For the iMasque can be bought with a huge variety of different finishes for its chunky frame. We plumped again for a fairly standard – but really quite plush – black velvet, but other options include piano black, a step-up velvet finish, and even a design featuring Swarovsky crystals! Or you can just choose any colour you like from the RAL colour spectrum, or have your installer ‘hide’ the frame entirely, as shown in the images below. 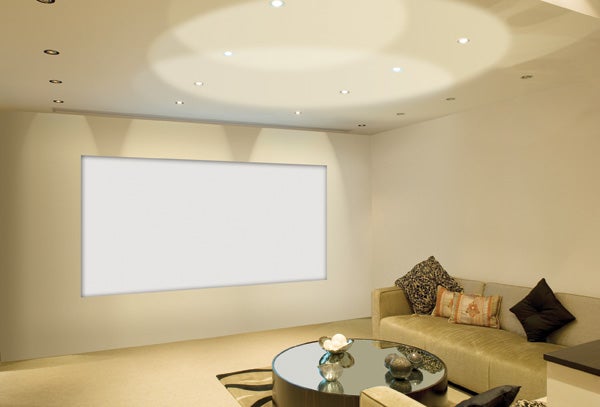 Personally, we wouldn’t opt for any frame design that might cause glinting reflections, but it really is nice to find Image Screens recognising that a projector screen is actually a very dominant feature in a room, and so should at least try to look good.


All this and we haven’t yet got to what’s arguably the iMasque’s best trick – the one, indeed, that gives the product its name. For the reason its frame is so chunky is that it has fully motorised screen masking on all four sides (though you can go for just two sides if you prefer).


In other words, a touch of a simple remote control button lets you adjust the screen’s effective visible aspect ratio to any setting you like. For instance, while the screen we got in for test was built to a 16:9 ratio, we could quickly and easily turn it into a 21:9 screen or even a 4:3 screen simply by pressing the relevant, pre-defined button on the remote control. 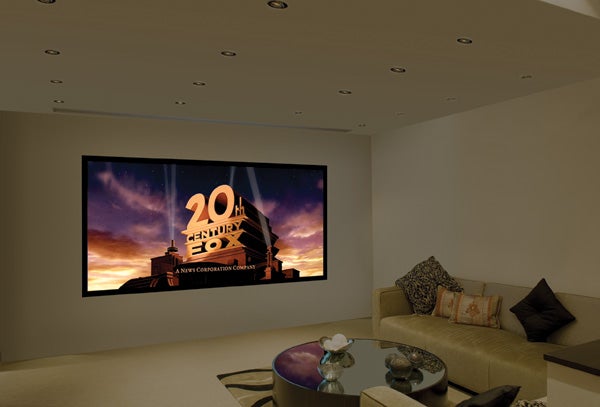 For those of you who don’t really think having masking around different ratios of video material matters, and reckon they can just live with the usual black bars from the projector appearing on screen around the image, then all we can say is that you actually need to see a masking screen in action. The difference in terms of contrast and the way you stay focussed on the image is genuinely profound – just as it is when you watch 21:9 films on Philips’ recently reviewed 58PFL9955H 21:9-ratio TV, in fact.


Whenever you’re talking about a screen with motorised masking, build quality issues are a huge thing. After all, you don’t want the motors breaking down a week after you’ve had your screen installed. So it’s reassuring to find the frame of the iMasque feeling exceedingly robust, made as it is from extruded aluminium. What’s more, Image Screens’ dedication to the cause has even led to it developing a proprietary and exclusive bi-directional motor design that cuts down on the amount of cabling used, and reduces the number of control boxes. Meaning, quite simply, that there’s less that can go wrong.

The only catch with such an uncompromising design approach is that it makes iMasque screens extremely heavy to build and manoeuvre – but then that will likely be a problem for an unfortunate installer to deal with rather than the end user!


One final feature worth noting about the iMasque screens is that they can carry RS-232 and LAN ports, so they can be integrated into full home entertainment control systems.


The features, flexibility and build quality of our iMasque screen have already done much to justify the £8,600 starting price, in our opinion. But it also delivers the goods with its performance.


The first thing that struck us was just how much more natural colours looked from a variety of different projectors than they do on our standard, much cheaper Vutec projection screen. There’s both more subtlety and more dynamic range in the iMasque’s colours, making the picture look notably more expressive and ‘real’. This is especially true with a really high-end projector like the SIM2 C3X Lumis, where the screen makes great use of the extra brightness it’s presented with from the projector. 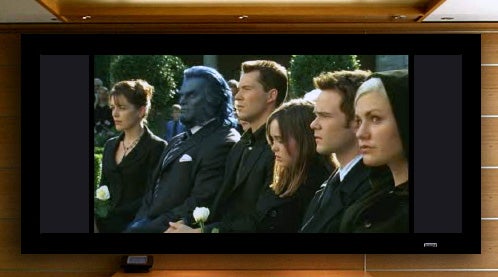 To explain this a little more fully, the finish of our Nivo Black screen is so flawless, tonally neutral and also perfectly judged in terms of its gain properties that it’s able to use the SIM2’s extra brightness to deliver more vibrancy and detail insight, rather than just splurging the extra light all around in an uncontrolled fashion, like cheap projectors tend to.


As suggested earlier, though, while the iMasque is certainly at its best with high-end projectors, it also delivers notably better results from good mid-range projectors like Sony’s HW20 and Epson’s TW5500. Its impact is least pronounced with budget projectors, but it still delivers an improvement over the cheaper screens we’ve tested, especially when it comes to colour toning.


As well as its immaculately judged handling of luminance and colour, the iMasque does a superbly effective job with black level response, even using its white (as opposed to grey alternative) screen. Plus it shows up absolutely no sign of visible screen material texture, and crucially its masking keeps unwanted ‘wasteful’ light reflections to an absolute minimum. The screen material also proves uncannily good at helping HD pictures look sharp and detailed, and suffers with neither hotspotting nor reduced vibrancy if viewed from an angle.


Really, the only area where the iMasque could be improved is with the blackness of its masking material; it looks a touch grey at the moment, and could perhaps soak up a touch more light too, to make its border-defining impact on the picture even stronger than it already is.


The iMasque is quite simply a superb projection screen option for a serious home cinema enthusiast, combining excellent features, superb build quality, and terrific picture qualities – all for a price that isn’t out of the way at all for such an uncompromising and thoughtful product.