It’s only a couple of months since I was predicting the end of the CD, yet here I am looking at the iLuv i9200, a 4-disc CD player with an iPod dock on top. 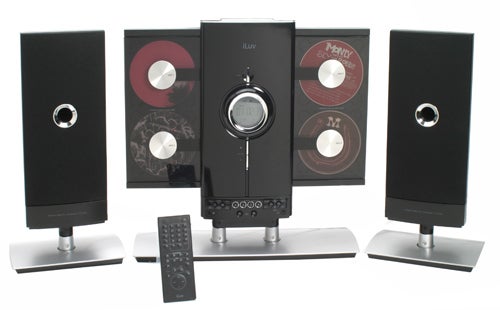 The iLuv is a clear throwback to those 90s cool wall-mounted CD players with sliding doors from the likes of Nakamichi and Bang and Olufsen. You can see the discs spinning and everything! The cool bit is that at £170 it’s much cheaper than anything you’ll ever get from those companies, so if you ever wanted one of those, now’s your chance. I once stayed at a posh hotel that had a Nakamichi system on the wall and hooked up my iPod to it via the twin phono to mini jack cable I had, naturally enough, packed with me. With the i9200 there would be no need, as there’s an iPod cradle located at the top nestling under a flap. A bunch of cradles are supplied for all iPods with a dock connector, though oddly not for the video iPod. Instead some rubber pads are supplied and you have to mod the photo iPod adaptor with them. An early sign of the inevitable cost cutting.


Before I go on I have to say a word about the name of the company – iLuv, a rather awkward Dick-van-Dyke meets Apple branding. Heads up people – simply putting an ‘i’ in front of a something does not make it cool. 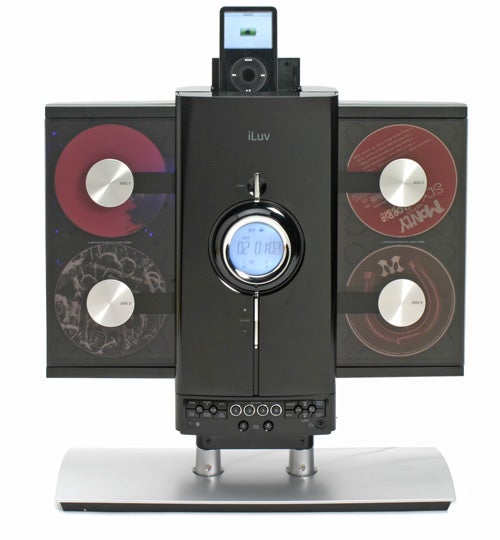 Moving on though, as soon as the iLuv was unboxed in the office it was argued in the office that it’s contradictory – after all, if you have an iPod, do you really need a CD player? It’s not as if the i9200 will rip your CDs to your iPod, so really it’s just about the way it looks. It looks best when you put discs inside it, otherwise you see the trays behind. Naturally, it can be wall mounted, and screws and wall plugs are provided but you’ll have to take care over the height – if you place it too high you’ll have trouble putting the iPod in the tray, but if it’s too low, it’ll just look odd. Many would agree that on the Apple Hi-Fi the iPod in the dock on top looked rather precarious and exposed. It works better on the iLuv though as it’s in keeping with the shape and if the i9200 is on the wall it won’t be knocked off too easily.


To wall mount you’ll need to remove the stands, which is just be a matter of sliding off the stands. It’s a shame though that iLuv couldn’t have covered over the screw heads – it lacks polish exposed as they are. 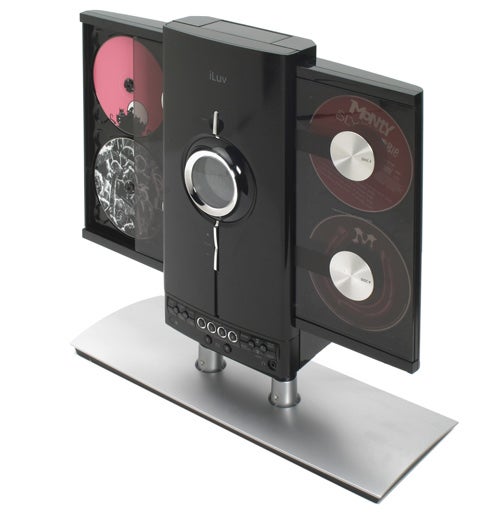 Putting the i9200 together was very simple – you just have to attach the speakers to the main unit via the rather weedy speaker cables (which are captive) to spring clip terminals at the rear of the main unit. A phono input for adding a sub is present too, should you wish to supplement the sound from the supplied units. You might feel the need to do so as the speakers are also incredibly lightweight, which didn’t bode well for sound quality. Close up, the fit and finish is merely ok – it’s quite plasticky but overall it looks fine. It’s available in white too, but I think the black is smarter though it does pick up finger marks. 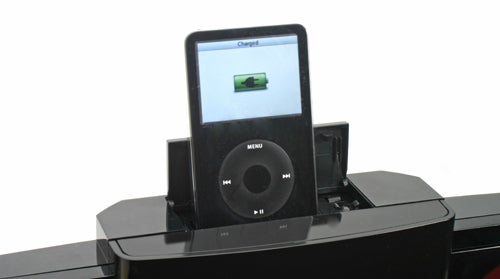 The oblong angles contrast well with the various circles – the four silver centres of the CDs is accompanied by a silver circle surrounding the ports in the middle of the speakers. The literal centrepiece though is a large silver dial surrounding an LCD screen, which glows blue when you turn the unit on. And when you place your iPod on top, you get another circle adding to the affect – the scroll wheel. The clean look of the speakers is rather spoilt by a flurry of buttons that sits at the bottom of the centre unit – it really ought to have been covered by a flap.


The controls replicate those found on the rather uninspiring remote – with raised bumps for buttons. It is large enough to avoid being cramped and is clearly labelled. However, if you want to change the volume, you have to press volume up or down twice – once to bring up volume and another to get it to do what you want, which seems silly. It also is unfeasibly difficult to actually get the controls to do anything, which is quite frustrating. When you want to be cool and debonair at your dinner party with your wall hanging, door sliding CD player, you’ll be stabbing fruitlessly at the buttons. 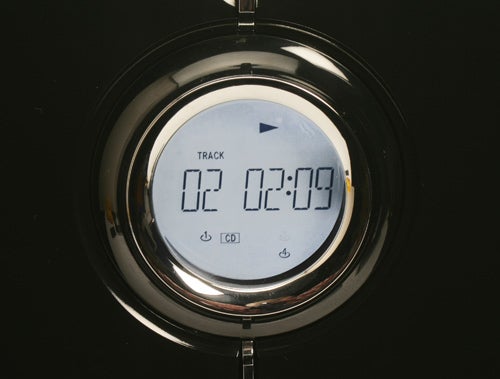 In case you are wondering, yes the doors do slide apart, Star Trek style. You can’t do it from the remote though, so you can’t show off – you have to walk up to the thing and press R or L at the base. The movement is steady but not completely smooth or noiseless – a sign that this is a B&O on a budget. You can only do one side at a time as the glass frontages move into the same space.


Powering on from the remote, the blue display welcomes you with a little ‘Hello’ and not surprisingly, a ‘Goodbye’ when you turn off. If you’re playing a CD, you choose between 1-4 on the remote and Load appears on the display. I found that discs span up and played nice and quickly. Pressing Display Mode, switches the round blue screen, between track number and time, the clock and timer. The latter lets you wake up to a CD or your iPod, whatever was last playing and has a snooze button that turns if off for another nine minutes, though you’ll have to be quite precise on the button.

Pop the iPod onto the iLuv and press the iPod button and switches it over to the portable player. You can Play/Pause and skip tracks but you can’t navigate, though that’s no different to the remote that comes with the Apple Hi-Fi. The i9200 also supports MP3 CDs and you can browse by track or folder. However, once you are in a folder you can’t say, press ‘6’ for track six of that particular album – it will take you to track 6 of the entire disc. This is a shame as it can read ID3 tags, so should be able to work it out from that. A FM tuner is also included, but I couldn’t really test this as there’s just a thin wire for an aerial and I could not get any kind of signal indoors. There’s no way of adding an external radio aerial either. 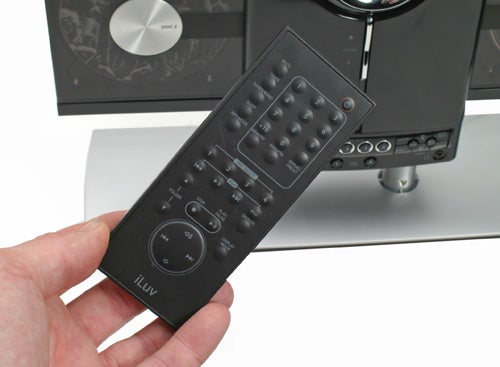 So how does the iLuv sound? Judging by the lightweight construction I wasn’t expecting much and to be frank that proved a fair prediction. The player does its job, is not offensive in any way, but it doesn’t really bowl you over either. When I first turned it on, at low volume it sounded quite pleasing, with a clean sound. As you turn it up the volume level is enough to fill a medium sized room quite easily, and is good enough to get the foot tapping. The sound has a real spacious quality to it, and does a good job of producing vocals and upper frequencies. However, when pushed, the tweeter starts to sound harsh, and hi-hat’s and snares suffer. The biggest problem though is that the lightweight speakers just don’t have a full and rich enough bass – bass lines have no real character or warmth. However, I prefer not enough bass to too much, which can just sound boomy and unpleasant. 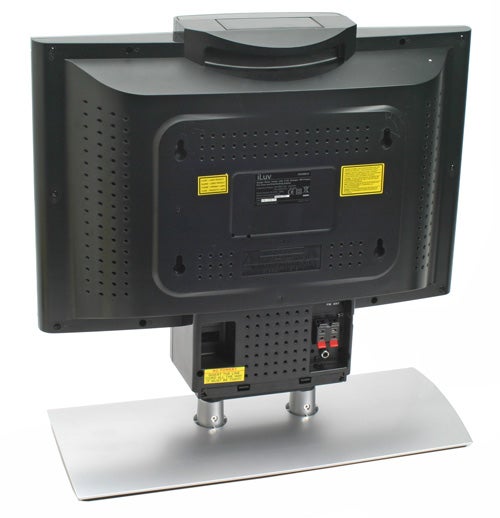 The iLuv i9200 can’t be accused of being Hi-Fi – it’s Fashion-Fi. It’s no boombox, but it does its job well enough and that’s to look cool on the wall with the convenience of being able to pop your iPod in. I do wish it could rip your CDs though.


The i9200 is the CD player you’ve always wanted on your wall – a vertical affair with four discs on show and sliding doors. Sound quality is only OK, lacking bass from the lightweight speakers, it doesn’t rip CDs and the remote is poor. However, it does look pretty good so if you want B&O on a budget, it offers good value. 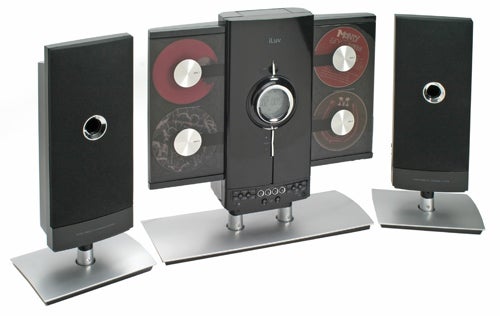