What is the Ikea LILLÖN?

The LILLÖN is the most affordable barbecue in Ikea’s current range, with pricing starting at a modest £90. Despite being cheap, the LILLÖN is one of the best-value charcoal barbecues I’ve tested – and one of a select few sub £100 units that I’d trust to last more than a couple of years. This, plus its compact dimensions, make the LILLÖN a perfect choice for balcony barbecuers looking for an affordable burger and sausage station.

Gourmet chefs looking to do slow cooks, or barbecue larger chunks of meat would do well to look elsewhere however, since the LILLÖN’s temperature controls aren’t great. The LILLÖN requires some basic assembly, but nothing that’s beyond even the most inept of DIYers and perhaps what you would expect of Ikea. All you have to do is screw in the four legs, assemble the lid and attach the body’s rear metal temperature control. All in all, the process took less than 10 minutes.

Once assembled, the LILLÖN is one of the nicest-looking sub-£100 barbecues I’ve come across. The barbecue’s porcelain-enamelled steel body and lid have a black sheen that not only looks attractive, but also proved weather-resistant during testing. The barbecue survived more than a few summer downpours and an accidental encounter with a balcony floor unscathed.

Its oval shape and shallow 45cm width also make the barbecue compact enough to discreetly sit on most balconies, making it a solid choice for people living in flats, or those with shared gardens.

Overall, the design is pretty minimalist; Ikea has added next to no external flourishes or extras to the LILLÖN. While I’m a fan of the visual simplicity, this does mean the LILLÖN doesn’t feature a tool tray or ash bucket, which is a minor annoyance.

The barebones feel continues inside, where you’ll find a single stainless steel cooking grate that can only be set at one level and porcelain-enamelled steel plate for the coals.

The only useful extra on the entire barbecue is a nifty hook on the inside of the lid that lets you rest it on the LILLÖN’s side-facing plastic handles. 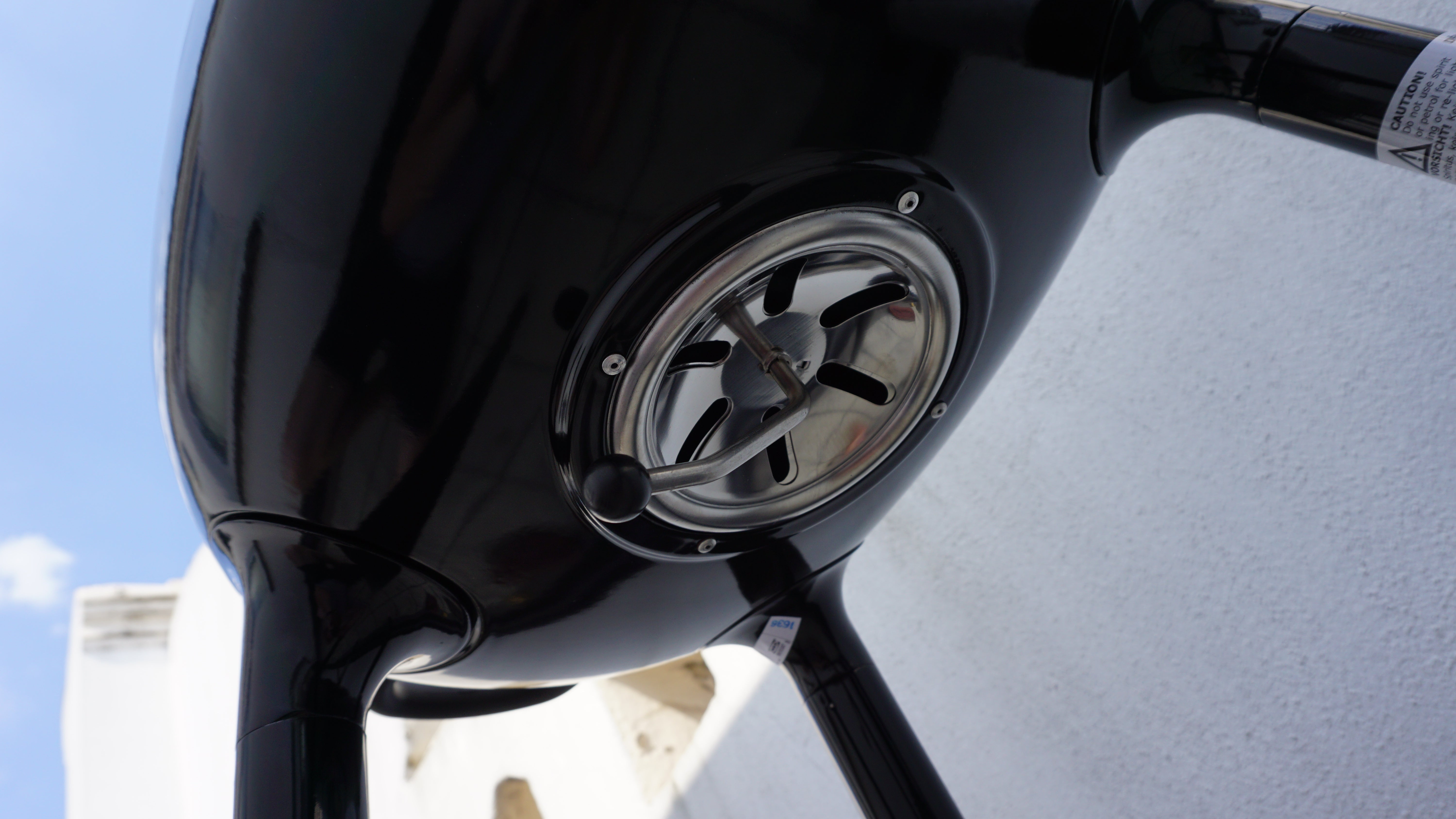 For basic cooking, the LILLÖN is excellent. Our opening set of tests barbequeing classics, such as burgers, chicken, sausages and halloumi, produced satisfying results.

The unit’s reflective finish ensured heat distribution was uniform, although the lack of airflow on the main coal plate made the temperature controls feel less reactive than more common kettle-style cookers that usually have grates.

The lack of airflow to the bottom of the coals also means that the LILLÖN’s natural cooking temperature is a little lower by default than competing Weber kettles. This isn’t much of a concern, though; cook times are solid. I generally managed at least one-to-two hours of use with 2-2.5kg of charcoal.

The 64 x 45cm oval cooking area isn’t huge, but I managed to comfortably cook for groups of three to four people. The LILLÖN didn’t perform as well for more serious cooking, such as slow roasts. Trying to cook a rack of lamb and fillet of beef, the results were mixed. The body itself offers good heat retention with the lid on, but the lack of an external thermometer makes it close to impossible to determine the exact temperature.

Normally this could be overcome by using a meat thermometer, but the LILLÖN coal plate’s lack of ventilation means the charcoal goes out pretty much the moment you put the lid on, even with the vents fully open. This makes roasting on the LILLÖN a game of guesswork – and isn’t something I’d recommend doing. This is a shame, since heat is otherwise effectively retained and spread throughout the barbecue with the lid on. Should I buy the Ikea LILLÖN?

If you’re in the market for a small-form-factor barbecue for basic cookouts then the Ikea LILLÖN is an excellent choice. The small oval cooker doesn’t come with any extras, but it gets the basics right, offering wonderfully even cooking temperatures and a robust, weatherproof design that’s sure to last more than a few years.

However, the lack of an external thermometer and slightly lacklustre ventilation with the lid on mean that those on the market for a barbecue that can handle slow cooks or roasts would do well to look elsewhere.

A great-value small-form barbecue, ideal for buyers on a budget.