I told several friends that I was reviewing a Hyundai LCD monitor. Response? Said friends all replied with, “Don’t they make cars?” That certainly got tiresome after a while, but I have to admit that the Korean company is better known for its vehicles. However, a quick glance at its display website reveals a relatively new division called ImageQuest, and judging by its growing range, Hyundai wants to make a big impression. 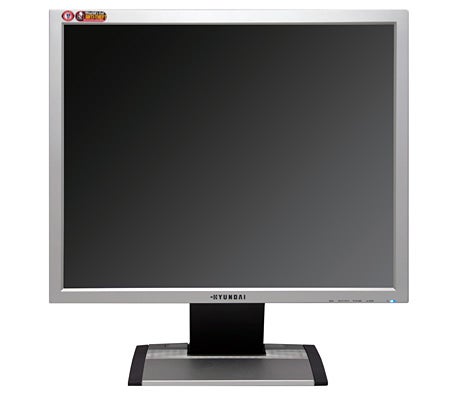 One of the latest models to hit the stores is the 19in Q90U, and I’m looking at one right now. Hmmm, a 1,280 x 1,024 native resolution over a 19in diagonal? Is it really worth it I ask myself, when a typically cheaper 17in LCD shares the same number of pixels, albeit slightly smaller ones? Not really in my opinion, but there are two (dare I say weak) arguments in a 19in LCD’s favour. First, default font and icon sizes are a little bigger for those who like it that way, and secondly, as pointed out by one of our readers, because the default font size is bigger you can always drop to a smaller font size in your browser in order to see a few more lines of text without scrolling (depends on the coding and layout of the website for that to work though). 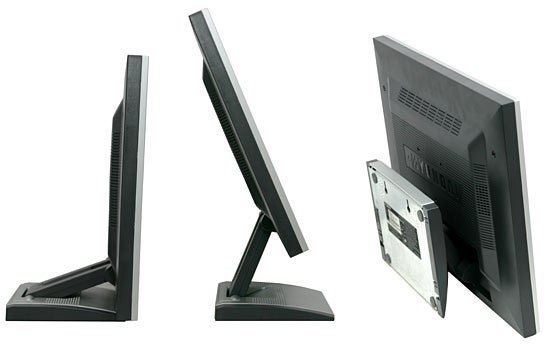 So decide if you want a 19in or a 17in LCD first. If it’s a 19 incher, then the Q90U is certainly an option. In terms of design it’s somewhat bland with its two-tone dark grey and silver finish, but at least the narrow bezel is delightfully unobtrusive. There’s no pivot mechanism but the Q90U has a dual-hinge arrangement that lets you raise the panel through 7.5cm and tilt it back parallel with your desktop. This means the Q90U can be mounted to a wall via the holes in the square base, while the stand acts as a mini-arm that extends from the wall. 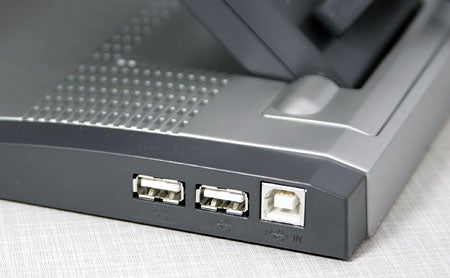 While the wall mountable stand is a nice idea, I have several gripes. I’m impressed that Hyundai has included a two-port, bus-powered USB2.0 hub in the right side of the stand’s base, along with DVI-D and D-SUB ports. However, a DVI cable is an optional extra which is a little mean considering the higher than average £328 price. Furthermore, trying to plug a DVI cable into its respective port is severely hampered by the upper hinge arrangement. 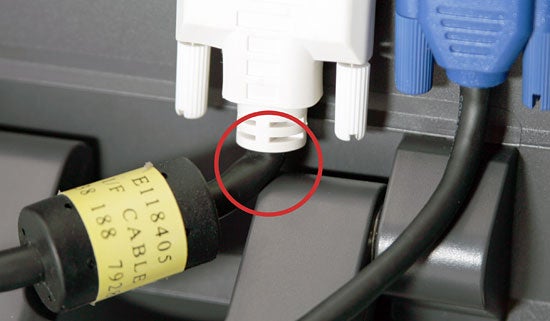 It took a bit of persuasion and some serious cable abuse to get it in. Why Hyundai has overlooked this fact is beyond me. Surely mounting the port a little more to the left so that it sits in the centre of the hinge makes more sense? Because the D-SUB interface is smaller no problems were encountered with its fitting. Once all the cables are in place, they can be gathered in with a couple of hooks if you choose to fit them. 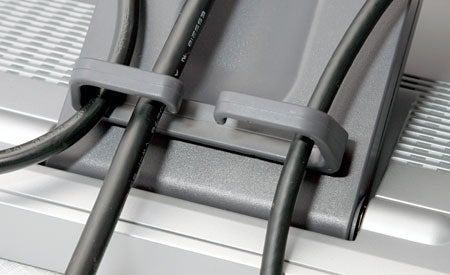 As for the rest of the feature set, the Q90U comes with 2W stereo speakers housed in the rear of the chassis, even though the speaker-like perforations in the base would have you believe otherwise. Performance from these is nothing to write home about. Tinny, lifeless, and weak, but that comes as no surprise with many LCDs also carrying similarly feeble speakers. Don’t get me wrong. They produce audio, but are only really suitable for OS sounds and perhaps the odd compressed movie trailer. Not for serious music appreciation, but you can always plug in a decent set of cans in the headphone jack. You’ll also notice that the power lead is one of those not-so-common three pin types. Lose or damage that, and it could be a hassle to find a new one. That said, Hyundai cover you with a three year on-site warranty, but I doubt that covers individual cables. 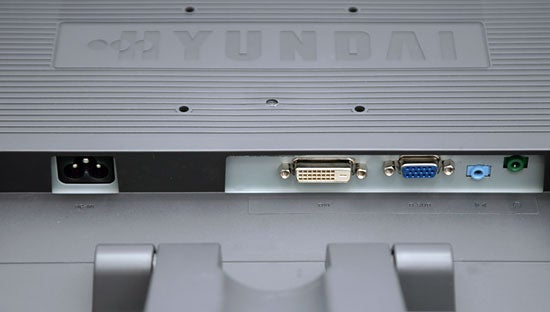 In terms of setting up the Q90U, things got very familiar as I’ll highlight in a minute. Basically, there are five buttons mounted vertically under the bottom right corner of the bezel. These cover all the typical screen adjustments you’d expect to find in an LCD, such as position, size, and colour control (user defined RGB levels plus two presets called “reddish” and “bluish”). All these are only available when an analogue (the D-SUB port) is used. When using a digital source only the brightness and contrast can be changed. 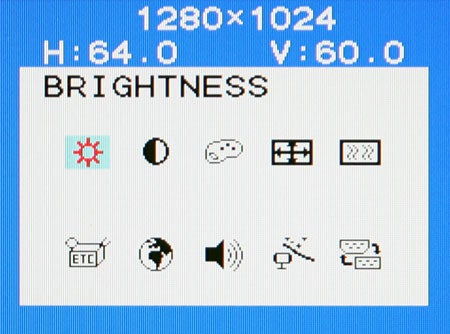 The buttons can also be used for muting the sound, raising and lowering the volume level and initiating an auto-adjust function for use with an analogue signal. I’m a little disappointed there’s no one-touch signal source select button, and by the fact this option did not fully work in ImageTune – a software utility (looks very familiar to me) that allows monitor adjustment and colour tuning using the Display Data Channel Command Interface (DDC/CI) protocol. I say familiar because ImageTune’s functions are almost identical to those in Samsung’s MagicTune software that came with the Samsung 173P. In essence, OSD adjustments to the picture can be controlled via ImageTune instead of the Q90U’s OSD. Overall, ImageTune worked well. Like Samsung’s MagicTune, there are test screens and wizards for adjusting and colour calibrating the screen. These can be saved to named presets for use as and when. The similarity also continues with the same three brightness modes for ‘Text’, ‘Internet’, and for ‘Entertain’. 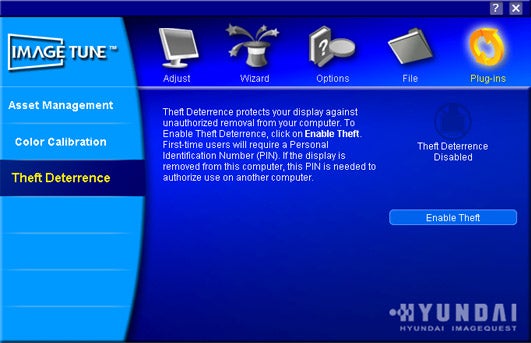 There is one difference though. Under the ‘Plug-ins’ menu is the ‘Theft Deterrence’ option – a more accurate term than the ‘Anti-Theft’ sticker on the monitor itself. Why? Well anyone can physically steal this monitor from me. There is no Bond-like lethal gadget that would bring certain death to a would be thief. Rather, the theft deterrent is a PIN-based procedure that hinders the operation of the display once it has been removed from the host computer. Briefly, you register and store a PIN to a secure web site, then set a countdown timer. If the power and display cables have been removed and the Q90U has been attached to a different computer, the timer counts down. If the correct PIN is not entered using ImageTune, the monitor will enter theft mode and display a large warning message. It doesn’t prevent the Q90U from being swiped, but at least there’s some satisfaction in knowing the thief can’t use it.


The Q90U is quite feature-rich and it comes with good CD documentation, but what about the image quality? Using DisplayMate, the Q90U presented a mixed bag of results. With stated figures of 700:1 and 300cd/m2 for contrast ratio and brightness resectively, the Q90U is very much a punchy and vibrant display. This worked well for gameplay and the 3ms response time (grey-to-grey) bodes well for minimising motion smearing, even though I’d advise taking response time figures with a heavy pinch of salt.


The steps in the colour ramps were all defined, but the finer greyscales revealed signs of banding. Greys also appeared to have a reddish tinge to them, which can’t be compensated for when the digital connection is used. In addition, highlights have the tendency to wash out unless you really fine tune the picture settings. Doing that is not helped by a noticeable colour shift observed over what is a very narrow vertical viewing angle. Even Hyundai states the viewing angles at only 135 degrees vertically and 150 degrees horizontally. Upon assessing my test images I felt they looked a little artificial, almost too saturated in places especially where skin tones were concerned. Nonetheless, I have seen monitors perform worse than this. On the whole an unremarkable showing, but a reasonably specced 19in LCD monitor.


The Hyundai Q90U has a good feature-set and the ‘Theft Deterrent’ is a nice touch, but colour adjustments are off-limits when using the DVI-D connection. The picture quality doesn’t make this an ideal option for image editing. It’s more of a general use LCD with a slight leaning toward the gaming market. Bold, punchy colours and minimal motion smearing are testament to that. Depends on your intended use really, but I’d spend the same amount or less on a good quality 17in LCD that has easy access to its video ports, gives you colour controls when using the DVI port, and perhaps has a pivot function.