Available to Download from Xbox Live Arcade
Hybrid isn’t a bad game, but it’s a glowing example of the fact that while fantastic games are often innovative, innovative games aren’t always fantastic. From 5th Cell, the team that bought you the even more inventive Scribblenauts and Drawn to Life, it’s a third-person, cover-based multiplayer shooter that takes a broom to the genre. Out go most of the tropes we’re used to from Gears of War and Ghost Recon. In come a whole wave of new mechanics based on jetpacks, magnetic boots and clever, partly-automated cover-swapping. 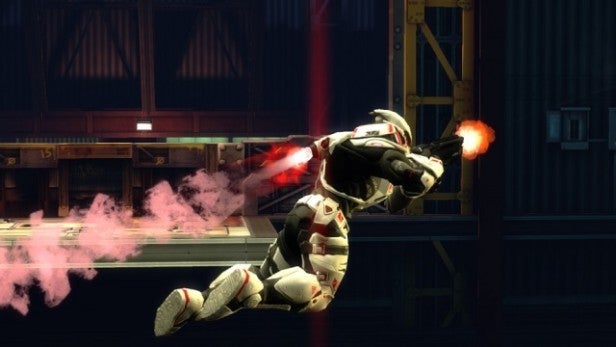 There is some sort of backstory featuring two factions – the alien Variants and human Paladins – and their quest for dark matter, but it’s really not that engaging or that important. What Hybrid delivers is a stream of short, three-on-three player matches in a range of recognisable variations – Team Deathmatch being the most common, but backed up by two King of the Hill modes, a sort of Capture The Flag Objective mode and a Tactics mode which works a bit like Counter Strike. The game’s matchmaking system wisely focusses on getting you into action as rapidly as possible, and it works. 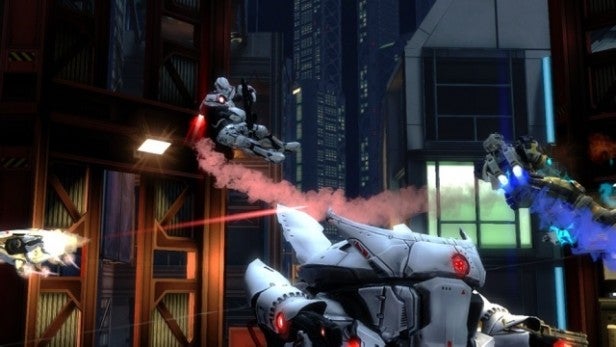 Moving into Cover
Like Gears of War, Hybrid is all about cover: finding the right position, moving between positions, popping out to take pop-shots or blind-firing over the top. Where Hybrid moves away from the formula is in how you get from one position to another. Instead of moving your trooper with the left analogue stick, you aim at a point of cover and press A. Jetpacks engage and you fly there at speed. You can use the left-stick to strafe left and right, or even turn and select a new cover point as you fly, but otherwise movement is limited. Once in cover you can shift left and right, or press Y to vault if you’re attacked from behind.

Despite a solid tutorial, this takes a little getting used to, but within an hour of starting play you’ll have the basics down. You learn to strafe and use a left-stick-click boost function to attack enemy positions, and you discover how to chain jet-jumps together, or switch destination rapidly when needed. And Hybrid hasn’t adopted this approach with no good reason. Cover points appear not just on the floor, but on walls and even ceilings. The weird movement system makes these quicker and easier to get to. 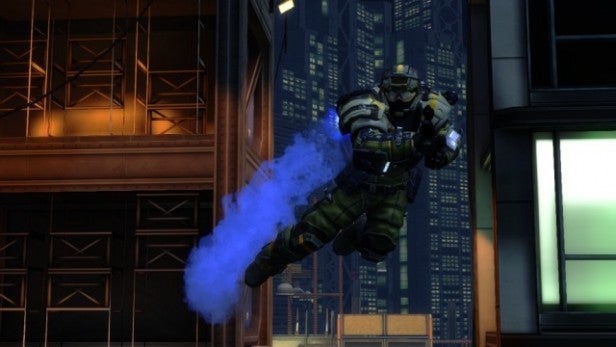 Perks and Kill-Streaks
Nor is moving and shooting all there is to it. For a start, all troops can select a special ability, starting with a simple frag grenade or armour perk, and have a basic class, which gives you bonuses for armour, damage or abilities. What’s more, kill-streaks earn you the ability to summon one of three drones, with the easiest to get a slightly weedy floating droid and the hardest a kind of enemy-seeking robot ninja.

Meanwhile, beyond the basic matches there’s a more complex, persistent meta-game. This involves persistent characters, with weapon and armour unlocks, not to mention new abilities, as you earn experience in game. However, it also means that your efforts are tied into an ongoing war, with the world divided into continents, those continents divided into regions, and specific regions giving additional XP bonuses to specific classes. To be honest, Hybrid doesn’t do a great job of explaining how all this works and we’re still a little mystified, but presumably all will make sense in the weeks to come. 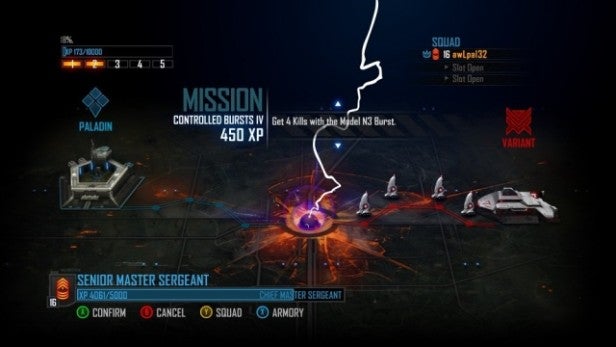 That is, of course, if people keep coming back for that long. Hybrid is a blast in short doses. The rapid movement and hard-hitting weapons keep things moving fast, and matches are over so quickly that even a bad match with irritating players won’t keep you bogged down for more than a few minutes. In the best maps, where wall and ceiling mounted cover points mix things up, the action feels different in a good way. You can’t deny that Hybrid brings something new to the genre. 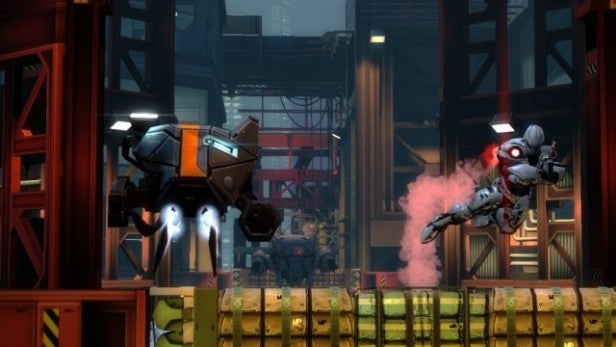 Being Different isn’t Enough
Unfortunately, it’s just not that consistently exciting for that long. It’s hard to say why Hybrid doesn’t pack in the thrills of a great multiplayer shooter, but for all its innovation it doesn’t have the tension of a Call of Duty, the teamwork and scope of a Battlefield or even the hard-hitting, brutal combat of a Quake. It’s much faster than a Gears of War, but not actually so gruesomely entertaining, and Halo 3 and Halo: Reach are – minute-for-minute – more engaging. Most of all, it doesn’t have much variety. The art and design feel generic, the maps lack character, and one round of shifting from cover to cover, blasting troops and drones, begins to feel a lot like another. After a while, it was only the lure of new levels and unlocks that kept us coming back. 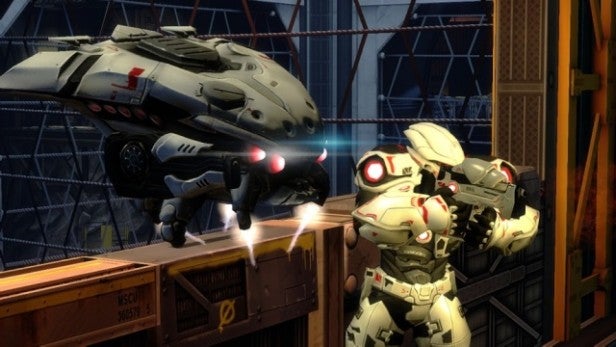 Meanwhile, smarter players are already working out that it’s easier to defend a cover point en-masse than it is to assault it. As a result, you’ll see a few games where two or three guys camp in one position, summoning drones and wiping out anyone who tries to take them on. While you can sort this out with flanking manoeuvres or a well-timed grenade, it’s still annoying, and shows that something about the balance is not quite right.

Verdict
Kudos to 5th Cell and Hybrid for taking a conservative genre and giving it a whole new spin, but there’s something about Hybrid that doesn’t quite work. It’s fun in short doses, but where the dark matter-grabbing metagame is meant to boost long-term appeal, the actual minute-by-minute gameplay works against it. It’s cheap enough to reward your curiosity, but unlikely to inspire much devotion.