The Humax PVR-9200T has long been regarded as the best Freeview personal video recorder money can buy, offering an unbeatable combination of features, user-friendliness and picture quality. But because it was launched long before the Freeview Playback initiative was brought into play, this superb digital recorder was in danger of being usurped by newer, cheaper and more talented models. So to bring it bang up to date, Humax released a software update earlier this year which adds the full range of ‘Group 2′ Freeview Playback features to the unit’s already impressive recording arsenal. So with these new talents in mind, combined with the fact that we’ve never featured it before, we thought it was time to take a long overdue look.

Before we get stuck into its internal talents, it’s worth noting that the PVR-9200T is not, and never has been, a work of art on the outside. Its boxy design and all-black finish is the epitome of bland, and not even the silver version can inject much excitement. But on the plus side the front-mounted buttons are tidily arranged and the information display is clear, telling you the name of each channel in large, legible text (instead of just the channel number).

The flap on the front hides the common interface slot for adding pay TV channels, and a Type B USB port, which enables you to transfer pictures and music from a PC onto the unit’s hard-disk and play them on your TV and home cinema system. The latter is a valuable feature, given its rarity among hard-disk PVRs.


On the rear panel you’ll find a fairly standard selection of sockets, including an RGB-capable SCART output for your TV and a second SCART that can be connected to an external recorder – but this second SCART only offers composite and S-video output, so you can’t make highest-quality RGB copies of programmes on DVD unless you use the ‘TV’ SCART. Also on the rear are composite and stereo audio outputs, plus an optical digital audio output that can carry a Dolby Digital 5.1 bitstream (should Freeview broadcasters ever start using them). These are joined by an RF input and output, the latter carrying digital TV pictures thanks to the RF modulator – useful if your TV lacks a SCART input.

So onto those new Freeview Playback features. The PVR-9200T can now be programmed to record an entire series of a particular programme at the touch of a button thanks to the Series Recording feature, while Split Recording detects when a programme has been split in two (perhaps to accommodate the news) and automatically records both parts. The unit will even let you know when a clash occurs in your recording schedule, and suggests an alternative time when the programme is repeated. All of these features make the recording experience incredibly simple, and finally make the Humax a serious rival to Sky+.

All units shipped into the UK after November 2007 already contain the new software, but if you bought one before then (or buy an older version second hand) then Humax says the over-the-air updates take place at least once a month, possibly for the next few months if not more. You can check the two-week download schedule here


Nestled inside is a 160GB hard-disk, which offers up to 100 hours of recording time. As with most hard-disk recorders you can pause live TV, but unlike some rivals the Humax’s buffer memory lets you rewind back to the point where you started watching the channel. Further flexibility is provided by the inclusion of two digital tuners, which makes it possible not only to record two channels at the same time but also to watch a third, provided it’s on the same multiplex as one of the programmes being recorded. You can also watch a recording from the hard-disk while recording two channels. 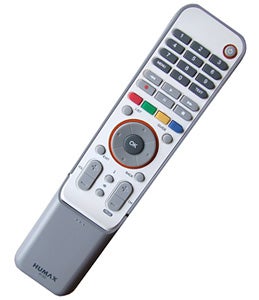 The features don’t stop there. There’s also an 8-day EPG, digital text, an auto-tracking feature for reserved recordings that keeps up to date with schedule changes, and a picture-in-picture mode to keep an eye on another channel without leaving the current one. And if you thought video editing was limited to DVD/HDD combi recorders, you’d be wrong – the PVR-9200T lets you copy, cut and split recordings to remove unwanted parts using a slick onscreen display.


The main reason for the unit’s success is its user-friendliness. With its canny use of icons and bright colours, the onscreen displays are nigh-on perfect, treading a fine line between welcoming newcomers and not patronising experienced users. The unit is ultra-quick in action, not only when changing channels or using digital text, but also when cruising around the menu options. Watching recorded shows is easy thanks to the attractive library menu that plays each video in a small box – but pressing Exit instead of OK or Play to start watching the recording in full screen is counter intuitive.

We’re impressed by the EPG too. It uses the comfortable timeline ‘grid’ layout made popular by Sky and also plays live TV in a small box. Simply click on a programme and up pops an info banner that offers you the chance to record the whole series or a single programme. The unit’s excellent ease-of-use factor is capped off by a superb remote that sports large and well-segregated buttons.

Humax continues the good work in the picture department, both with live TV and hard-disk recordings. Strong, bright colours are powerfully reproduced, as demonstrated by the dazzling tones on display with recordings from the kaleidoscopic CBeebies channel. Less cartoony colours like skin tones and grass are also perfectly judged, and the lack of block noise or colour banding is testament to the unit’s fine MPEG-2 decoding. Fast-moving action is also smoothly handled.


What’s more, the tuners are sensitive and robust – the entire Freeview roster locked into place with no problems and the picture refused to break up or freeze, even with an incoming signal that had been looped through several devices. Recording two channels and watching one also throws up no problems, and it’s pleasing to see that you can access the EPG while making a recording.


The Humax PVR-9200T cements its reputation as the king of PVRs with a set of new features that enhance its already unbeatable user-friendliness. Picture quality is superb by digital TV standards and it offers a level of flexibility that’s unparalleled in the PVR market. And because it’s getting on a bit, the price has dropped to the same level as its more recent rivals, so if you’re in the market for a PVR this really is a no-brainer.