After years of waiting, the BBC and ITV finally launched Freesat, a subscription-free TV service offering over 80 TV, radio and interactive channels broadcast from the Astra and Eurobird satellites. It’s available to 98 per cent of UK households, bringing digital TV to people who aren’t covered by a Freeview signal or don’t want Sky.


The service includes all the BBC and ITV channels, as well as E4, Channel 4 and a range of children’s, news and music channels, and the line-up is set to swell to around 200 channels by the end of the year. But here’s the best part – you also get hi-def channels from the BBC and ITV, and although ITV HD hasn’t yet gone live, when it does it will be exclusive to Freesat.

The Humax FOXSAT-HD was the first Freesat receiver on the market, and the £150 price tag includes the box but not a dish or installation, which will set you back a further £80. The box itself is remarkably compact, and attractively styled in black with a couple of silver strips that inject a dash of glamour. Either side of the central information panel (which only shows the current channel number) is a drop-down flap, one of which hides a cluster of menu controls, plus buttons that call up the programme guide and setup menu.


On the rear is an excellent array of sockets including an HDMI output, which is the best way to watch hi-def channels or standard-def channels upscaled to 1080i or 720p. Alternatively you can use the component output (which supports HD), composite or SCART, the latter offering RGB, S-video and composite video output. A second SCART allows you to hook up to your VCR or DVD recorder and make recordings of Freesat channels (in either S-video or composite), which will be useful given the lack of a built in hard disk.


You’ll also find an optical digital audio output that allows you to connect the unit to your AV receiver and listen to Dolby Digital broadcasts found on channels like BBC HD. There’s also an Ethernet port that isn’t enabled at present, but in the future will enable you to access IPTV services (such as BBC’s iPlayer), plus the USB port can be used to upload software updates.


The lack of a built-in hard-disk is a shame, but otherwise the digital TV feature list is fairly generous. It offers a 7-day EPG, digital text, subtitles, audio description and fast interactive access, plus its software can be updated using over-the-air upgrades.

Obviously the easiest way of setting up the system is to pay the £80 installation charge and get the professionals to do it. But if you already own a dish, then the unit is incredibly easy to set up yourself – simply plug in the satellite antenna cable into the LNB input and away you go. When you first boot up the unit, it checks the aspect ratio of your TV and the output resolution then asks you to enter your postcode so that the unit can find the relevant local BBC and ITV regions during the automatic channel search – a task it failed miserably by tuning in ITV Central after entering a Devon postcode, which meant that the ‘local’ news had no relevance. But in its favour, it did tune in the 56 TV and 18 radio channels very quickly. 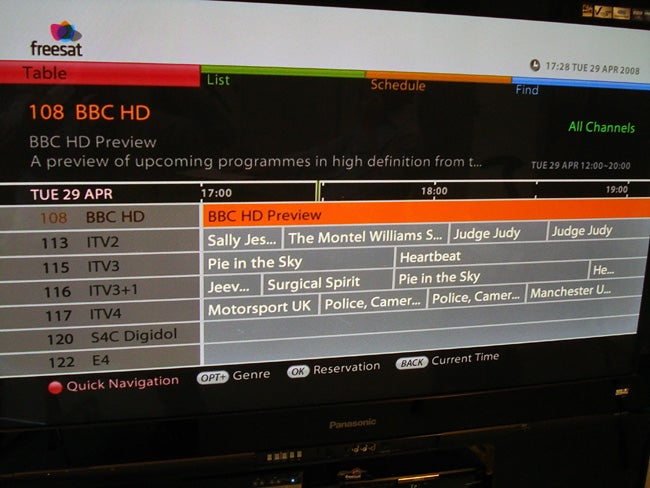 The unit’s onscreen operating system is fantastic. Designed with full colour, high-resolution graphics, friendly icons and clear text, even the biggest technophobes can make basic changes with no hassle at all. The digital TV displays are similarly clear, particularly the programme information banner (called the ‘i-plate’), which tells you everything you could possibly need to know about the current programme, including the resolution and the presence of Dolby Digital.


This flawless presentation continues with the intuitive 7-day EPG. When you call up the guide, it first displays a screen showing various programme genres, allowing you to narrow your search. The guide itself has a similar horizontal layout to Sky+; you can search by genre or keywords, jump through a week’s worth of programmes using the Quick Navigation mode and reserve programmes. Superb.


The ease of use factor is further boosted by the outstanding remote. All of the buttons are perfectly placed and the frequently used buttons are very easy to find, while the unit’s slick software responds to commands instantly. Channel changing and digital text access are also very fast.

Picture quality is generally impressive but far from perfect. Hi-def broadcasts on the BBC HD channel look magnificent, boasting masses of detail and a wide range of rich, vibrant colours – best demonstrated by clips of the Beeb’s beautifully shot wildlife programmes. Movement is smooth with minimal pixel noise and clean edge definition helps the image look crisp and forceful at all times. In a direct comparison with a Sky HD box, there’s very little difference in quality between the two, making this a superb way of getting hi-def channels.

Upscaled standard-def picture quality depends on the channel, but more often than not it looks quite ropey. BBC One, for instance, looks fairly clean and sharp, but ITV1 and some of the music channels look soft and noisy. All of the channels suffer from a little pixel shimmering here and there and there’s some ringing around edges, but a lot of this is down to the quality of the original broadcasts and none of it really spoils your viewing experience anyway.


As for sound, the inclusion of Dolby Digital output is a real boon when watching BBC HD, as you get full-on surround sound, the quality of which is superb. But if it’s not linked up to a home cinema system then stereo sound from the HDMI, SCART or analogue outputs is clean and audible.


If you’re interested in getting Freesat then we really can’t recommend the FOXSAT-HD highly enough. It’s incredibly fast and easy to use, delivers solid HD and SD picture quality and at £150 it won’t break the bank. Our only criticism is that Humax didn’t come out with a hard-disk equipped model first, but they’re bringing one out later this year. Also disappointing (but nothing to do with Humax) is the limited HD content and lack of certain channels (including Five) but it’s early days and only a matter of time before more channels are added.


How it compares with forthcoming Freesat receivers from the Alba stable is yet to be seen, but judged on its own merits the Humax is a superb set-top box that perfectly shows off the benefits of the Freesat service.