The Humax DTR-T2000 is the company’s latest YouView-certified TV recorder. Boasting 500GB of recording space it can record standard digital TV streams as well as access the latest on-demand services via the integrated YouView interface. If you’re after the best way to manage your TV viewing in a single box, it stakes a strong claim for being your first choice.

The DTR-T2000 gets off to a good start thanks to a smart design. Although the main chassis is just thin painted steel, the front’s finished with a nice plate of brushed metal that gives it a touch of class.

The minimalist selection of buttons and logos also helps the look, as does the choice of white LEDs, which are thankfully kept nice and subtle so they aren’t too distracting when you’ve dimmed the lights to watch a movie.

A panel on the right flips down to reveal, well, surprisingly little actually. Clearly the chassis was designed with the idea of having some sort of slot-in device – a smartcard reader, perhaps – but instead there’s just a big gap. Alongside it there’s just one solitary USB socket, with another gap below – presumably for a second USB socket.

In the centre there’s a circular control system that consists of a four-direction pad, allowing you to control some of the TV’s functions without the remote control.

Round the back is where all the connectivity action happens. From left to right you’ve got the main aerial input, then an aerial output for looping the signal on to another device. Next are the analogue video outputs with a scart socket and three phono plugs for composite video and stereo audio. Then there are the digital connections, with an optical digital audio SPDIF output and HDMI, followed by Ethernet and USB for connecting to your network and attaching USB storage devices. Finally there’s the power input.

It’s almost a perfectly on-spec set of features, giving you all the essentials and nothing more. The only missing feature is Wi-Fi. Instead you’ll either have to use an Ethernet/Wi-Fi bridge, a powerline adapter or, of course, run an Ethernet cable directly from your router.

In terms of what you can do with the DTR-T2000, its 500GB hard drive is enough for 125 hours of HD recording or 300 hours of standard-def recording. It also adds the ability to pause and rewind live TV, just like with Sky or Virgin Media TiVo. Also like those systems, you can record up to two channels while watching, pausing and rewinding a third.

Series-aware recording is also available, so you can set the box to record a whole season of a show with one click, with the box automatically prompting you when you select a compatible programme.

The other key feature of the DTR-T2000 is its on-demand selection. You get all the standard UK catch-up services  – iPlayer, 4oD, etc – as well as the recently added Netflix plus Quest, Sky NowTV, UKTV (including Dave) and Milkshake.

Crucially, though, the key to the YouView service is that all these services tie into the same TV guide interface as the real-time programs. So from one guide you can simply select the channel you want to watch live, scroll forward to set recordings or scroll back to open up the catch-up services for a previously shown program. It works for up to seven days before and after the current date. Available shows are shown in white, while those not available are greyed out, so it’s easy to tell what you can watch.

Once you start watching a programme from catch-up the service will switch to the proprietary interface of each individual service, rather than the generic Humax interface. All the other YouView menus and features still work over the top, so you don’t have to worry about not being able to open the TV guide and set a recording once you’ve already started watching last week’s episode of Grand Designs.

A mobile app is also available, which enables you to remotely set up recordings using the same guide interface. 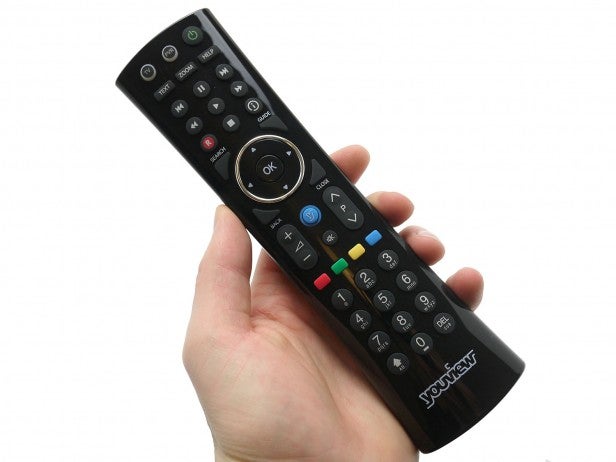 Setup of the DTR-T2000 is a cinch. Once connected up and powered on it’ll automatically tune, connect to the Internet, update itself and jump to showing live TV, with no services to sign up to or accounts to log in to. It takes a while to get through it all, but the process is simplicity itself.

The same could be said of the interface in general. It’s effortlessly easy to use and speedy, too. So many set-top boxes and TVs have clunky-looking, unintuitive and ponderous interfaces, but here everything looks smart, is where you’d expect and it arrives when you’d hope.

The interface is the standard YouView one, so much of the credit lies there, but it’s good to see Humax hasn’t skimped on the hardware and bogged it all down.

Also helpful is the excellent remote. Not only does it look quite smart but its controls are intuitively laid out, with buttons that have a good action to them. We’d prefer the power button on the left, where it’s more often found, but otherwise the core functions of the D-pad, channel up/down, volume up/down, pause and record are all within easy reach.

The main menu is accessed via the blue YouView button, and it provides access to the box’s settings, your recorded programmes, catch-up services, the guide and the search function. It’s overlaid over the programme you’re watching, so you don’t miss anything while you’re accessing it. 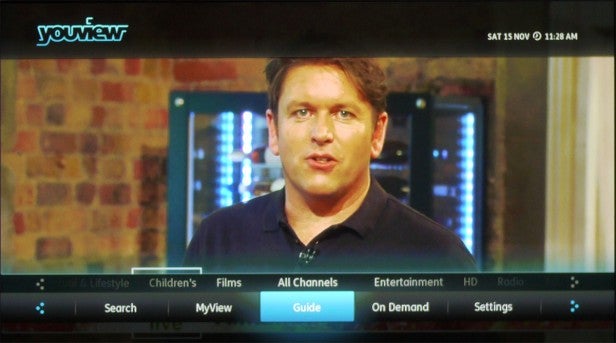 The search function works superbly, predicting what you’re searching for as you go – and generally doing a very good job of it. Once you’ve selected what you want to search for, it’ll match anything from the guide or from any of the catch-up and video streaming apps. So if you want to watch a movie, you can search here, and then if any of the compatible apps have it available you can jump straight to them. Apps such as Sky and Netflix will require you to set up or log in to an existing account, but again it’s a simple enough process. 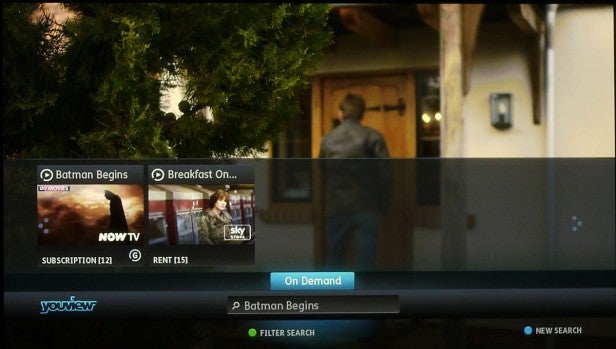 The real heart of YouView, though, is the guide. Ostensibly it looks like any other, with the programme you’re watching shrinking into the top-right corner and the rest of the screen filled with a list of channels and times. However, it’s the fact that you can scroll backwards as well as forwards that’s what makes YouView so neat. 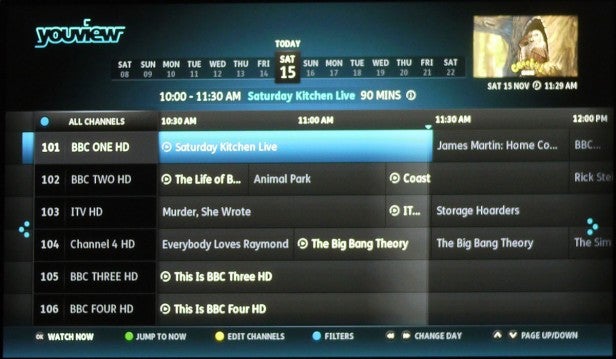 The catch-up service integration really is superbly implemented and makes such a difference to day-to-day TV use. Sky and Virgin both offer similar levels of functionality, but YouView has by far the slickest integration.

Where YouView trails Sky and Virgin is that the choice of channels is limited to those offered by FreeView. That’s still a decent selection, but you can’t, for instance, add Sky Sports. That is, unless you get one of BT’s YouView boxes which also includes some extra premium channels, including BT Sport, for an additional fee.

One thing this box does lack is any sort TiVo-like function where the box predicts what you might want to watch and records programs for you. We don’t consider this a huge loss, though, as TiVo is of limited real-world benefit in our experience. 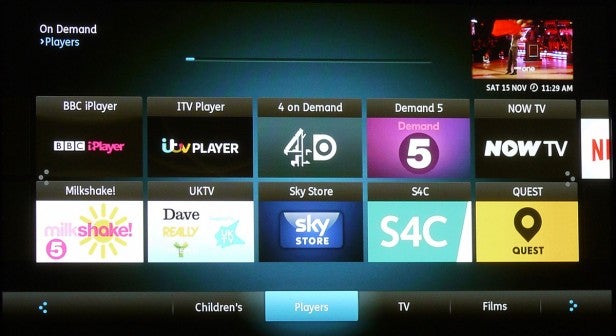 Overall performance of the DTR-T200 is excellent. It responds promptly to most commands and doesn’t miss a beat, even when recording two channels while you’re watching a third. The only thing to watch out for is the long start-up time when in its default eco mode. It can take around 30 seconds to boot, which can be frustrating if your favourite program is just about to start – though it will, of course, record it in the background if you’ve been organised. Instead we switched this to the less aggressive eco mode, which makes for near-instant start-up.

Picture quality was okay. Comparing to our Virgin Media box there’s a slight softness in both standard-definition and HD channels, but it really is only noticeable in side-by-side comparisons. Otherwise picture noise is handled well and colours appear natural.

As for heat and operational noise, the DTR-T2000 stayed whisper-quiet in our tests and didn’t get overly warm. An impressive result all round.

YouView is currently the best way to experience TV in the UK. Its combination of a slick Sky-style recording system and guide-integrated catch-up TV services makes it faster and easier to use than any other system out there. All that and it doesn’t require a subscription.

The Humax DTR-T2000 YouView is simply one of the finest ways to watch Freeview TV. Its integrated guide, with access to both live TV and catch-up services, makes it super-easy to use – plus the box looks nice, too.