The DN371T is a 500GB YouView PVR that allows you to watch and record over 70 digital channels and stream catch-up TV directly from its 15-day electronic programme guide (EPG). With live TV and on-demand web content consolidated into a single EPG, YouView is an ideal way for technophobes to join the ‘smart’ revolution.

Huawei is better known for its phones and tablets, but the Chinese brand has form in the YouView market – it’s been a strategic partner since 2010 and supplied boxes to TalkTalk when the platform launched in 2012. But now the company is stepping into the spotlight under its own name and faces stiff competition from Humax, who also supply BT’s YouView boxes.

The DN371T is a great-looking set-top box. The gloss-black fascia, dark grey top panel and curved corners give it a snazzy modern appearance that’ll play well in today’s living rooms. It’s also pleasingly slim, although the light, plasticky casing is a little below par for the money.

Controls are kept to a minimum – there’s a large button on top for changing channels and a power button, but that’s it. There’s no display panel on the front either, just three coloured bars that move left to right when a recording is in progress and glow green when it’s not.

On the back you’ll find HDMI, Scart and optical digital audio outputs, and an Ethernet port for the all-important online functionality. There are USB ports on the back and side, but sadly these are for service use only, not for media playback.

Also disappointing is the lack of built-in Wi-Fi, which would have made it even easier to access online content. As it stands you’ll need to run an Ethernet cable to your router or use a Homeplug system.

The DN371T’s 500GB hard disk stores up to 125 hours of high-definition programmes or 300 hours of standard-def. There are two terrestrial digital tuners, allowing you to watch one channel and record another, or record two channels simultaneously.

As for online content, you can stream programmes from BBC iPlayer, 4OD, ITV Player, Demand 5, Now TV, Dave, Really, Yesterday, S4C, Milkshake and Sky Store. To get Sky Store and Now TV you need to register and pay subscription fees. You don’t get apps like YouTube, Facebook and Twitter as you would on other ‘smart’ products, but you’ll probably be too busy streaming TV shows to care.

Scroll back through the EPG over the last 7 days and any shows available to stream from these services pop up in the programme grid, or you can visit the On Demand section of the main menu. 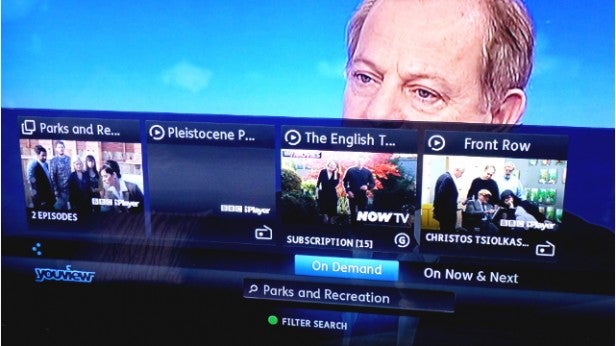 Alternatively you can use the superb search tool (above) to find content. Punch in a keyword and predictive text finds matching phrases (even from the first few letters) then displays relevant programmes in a single list, whether they’re on-demand or recorded.

The DN371T’s PVR recording features include series link, pause/rewind live TV and trailer booking (where you can schedule a recording by pressing the green button during a trailer). There’s also a YouView app for iOS and Android devices that offers a remote recording feature, as well as allowing you to browse what’s on while you’re out and about.

Any BT or TalkTalk broadband customers who want to upgrade and receive extra channels can do so at extra cost.