The original HTC Diamond was one of the company’s best selling handsets, so it was pretty much inevitable that HTC would take the Diamond name out for a second tour of duty. However, design-wise this new handset is very different to its predecessor.


Gone is the bumpy, prism-style rear cover that was the signature of the original handset and in its place comes a more practical, flat battery cover. The front of the handset has also been completely re-designed with the large touchscreen now almost filling the entire face of the phone. However, HTC has still found room to add a new touch-sensitive bar along the bottom of the screen which is used as a dedicated zooming control in applications like the Opera web browser, but more on that latter.


The front buttons have also been re-jigged. The call buttons, back key and Windows key are now presented in a neat row under the zoom bar, and are joined by a power/standby button at the top and a volume rocker switch on the left hand side. 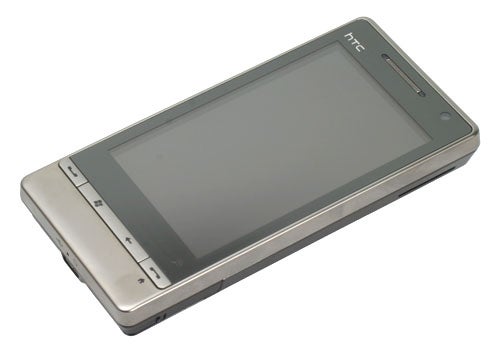 Overall, the new design looks sleek and classy, but it may be a bit too understated for some people’s tastes. However, one thing we’re none to keen on is the lack of a standard headphone socket. Instead, as with many of HTC’s other smartphones, the supplied headphones connect to the miniUSB port at the bottom of the phone.


Annoyingly there’s no headphone adaptor supplied in the box, so you really are lumbered with HTC’s own wired, stereo headset. That said, the Diamond2 does support A2DP audio streaming over Bluetooth so you could always go down the wireless route. 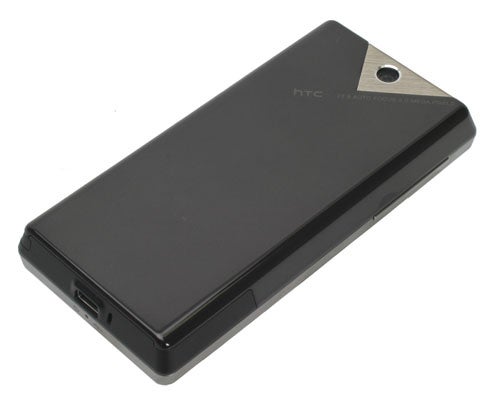 Unlike on the iPhone, the rear cover of the Diamond2 easily slides off to reveal the 1,100MhA removable battery and give you access to the microSD card (something the original Diamond lacked). There is a price to pay for this, however, as this version doesn’t have the original Diamond’s 4GB of internal storage. Still, with cards so cheap now, we’d rather have the flexibility of removable storage than be limited by internal storage that can’t be increased.

Another area where this model scores highly over its predecessor is the screen. As we’ve already seen, the Diamond2’s 3.2in display fills pretty much the whole of the front face of the phone. Colours look excellent and the screen is nice and bright so it’s easy to read outdoors. The resolution is 480 x 800 pixels – the same as on the Touch HD’s 3.8in screen – and text and graphics look just as sharp. However, the screen is resistive rather than the capacitive type used by the HTC Magic and iPhone and as such is less accurate and responsive when registering finger presses – something which is especially noticeable in the Opera web browser where it can sometimes take three or four presses on smaller links for the handset to respond correctly. 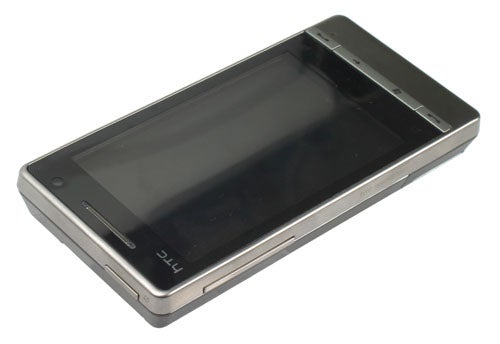 Despite this, the Diamond2’s onscreen keyboard works surprisingly well. In part this is because HTC has redesigned the keyboard so now when you press a key a pop-up graphic of the letter or number appears above it (just as on the iPhone’s virtual keyboard). The phone also vibrates slightly when a key is pressed to give you a little bit more feedback. These additions, along with the XT9 predictive text system helps speed up text entry. 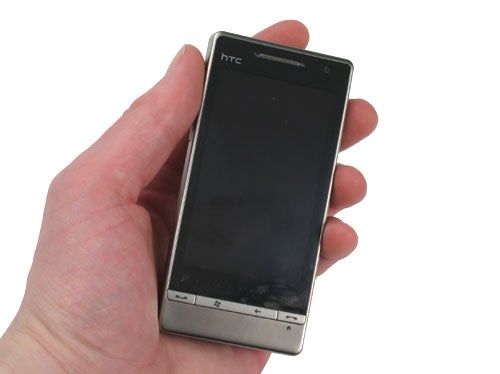 The list of smartphones with pretty ho-hum cameras is surprisingly long, but thankfully HTC has just managed to keep the Diamond2 off that list. While its not right up there with the very best snappers from say Sony Ericsson’s Cybershot range, it is significantly better than most you see on today’s smartphones. For starters, it has a decent 5-megapixel resolution and also packs in autofocus. As a result, shots taken outdoors look reasonably sharp and detailed. There are also some neat features in the cameraphone app such as the ability to stitch together shots to create quick panoramas. However, the snapper is let down somewhat by its longish shutter lag and lack of a flash. 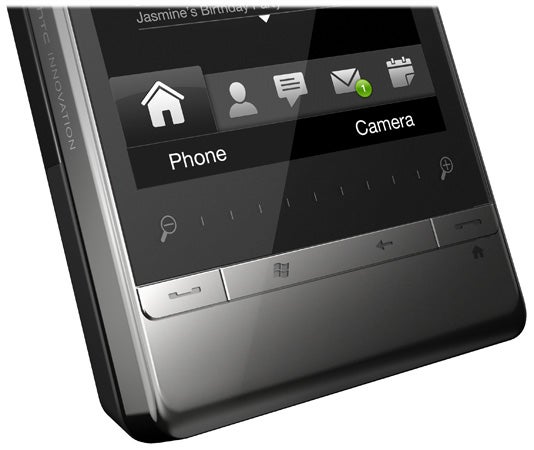 One of the key features that this handset boasts over previous HTC models is the touch-sensitive zoom bar that sits under the screen. It works in most of the key applications including the picture viewer, Google Maps app and the Opera web browser. It’s not quite as good as having the iPhone’s multi-touch pinch to zoom feature, but it’s probably the nearest thing to it in terms of usability, and really does make a massive difference when using the browser. The usefulness of being able to quickly slide the zoom control to resize text and graphics on web pages really shouldn’t be underestimated.

The Diamond2 is quad-band so you can use it in most countries around the world and thanks to the Wi-Fi and HSDPA support the browser is fast to load web pages whether you’re at home connected to your own broadband link or out and about using the mobile network. The phone also has GPS onboard which you can use to pinpoint and track your position in real-time via the dedicated Google Maps application. The GPS in this handset was noticeably faster at locking on to satellites than the old Diamond, especially after you’ve downloaded the satellite data via the QuickGPS 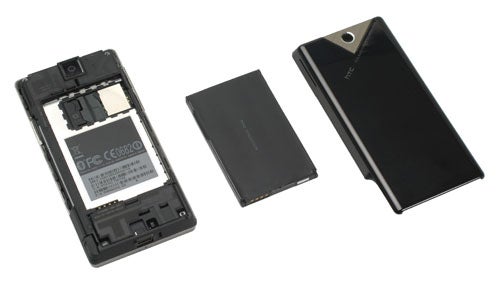 Battery life on the whole was pretty decent too. With medium usages of all the main features we got around two days out of it. However, when we really hammered the GPS receiver and HSDPA for web browsing this dropped to less than a day. But let’s face it, that’s pretty much true of all of today’s smartphones.


The Diamond2 also runs a new version of HTC’s TouchFlo 3D user interface. TouchFlo has now developed into quite a mature interface, especially now that HTC has throttled back on some of the more unnecessary animations. This latest version feels much faster and more responsive to use and gives you more control over the handset’s settings, with the result that dropping back into the standard Windows Mobile interface is a much less common occurrence. However, when you do have to drop out of TouchFlo, to use say Onenote or Pocket Word, the difference between TouchFlo’s finger-friendly approach and the tiny buttons and fiddly menus of Windows Mobile still really jars. 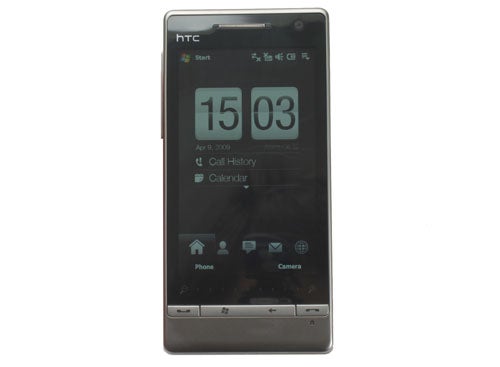 Of course, there is also the longer term issue of what will happen to TouchFlo 3D once Windows Mobile 6.5 appears. While the new Windows Mobile 6.5 interface may not be perfect, it’s likely to feature menus and features that are similar to those offered by TouchFlo, yet it will be more tightly integrated into the core of the OS. When that happens, will TouchFlo still be necessary? The Diamond2 is Windows Mobile 6.5 ready as when Microsoft announced Windows Mobile 6.5 at the Mobile World Congress, it said that the Diamond2 would be one of the handsets that would be upgradable to the new OS. However, this of course depends on whether HTC actually releases the ROM.


We think the Diamond2 is perhaps the best Windows Mobile-based device that HTC has ever produced. TouchFlo 3D is now at a level where it provides a very fast and easy to use interface for most day-to-day tasks, and the new zoom control makes web browsing very satisfying – more so than with any previous Windows-powered HTC phone. However, as an overall package the Diamond2 is still not as slick or straightforward to use as the iPhone or even HTC’s Android-powered Magic handset. 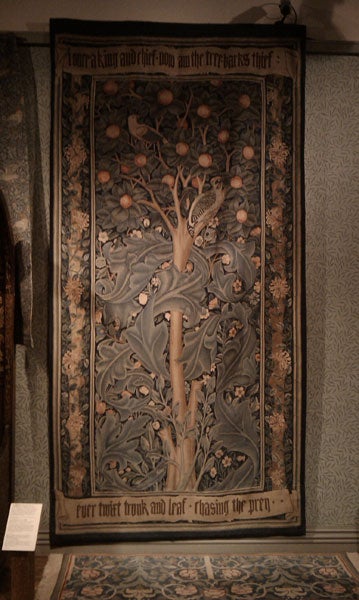 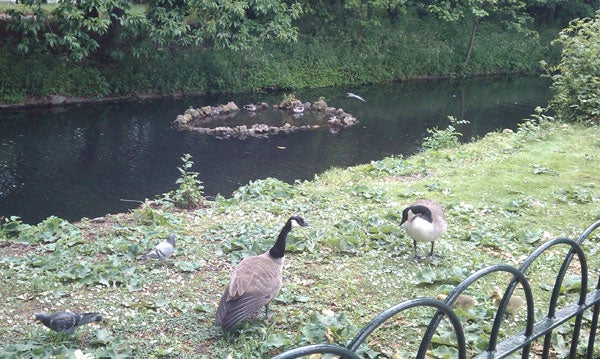